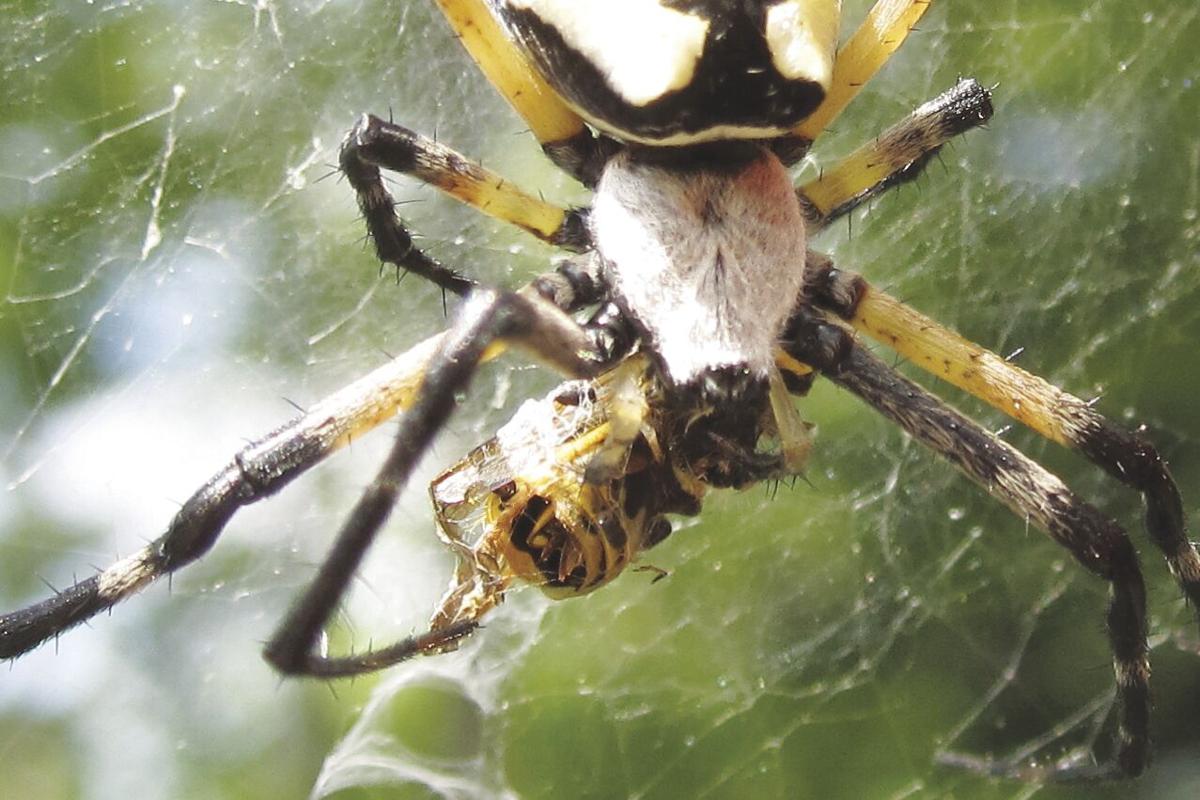 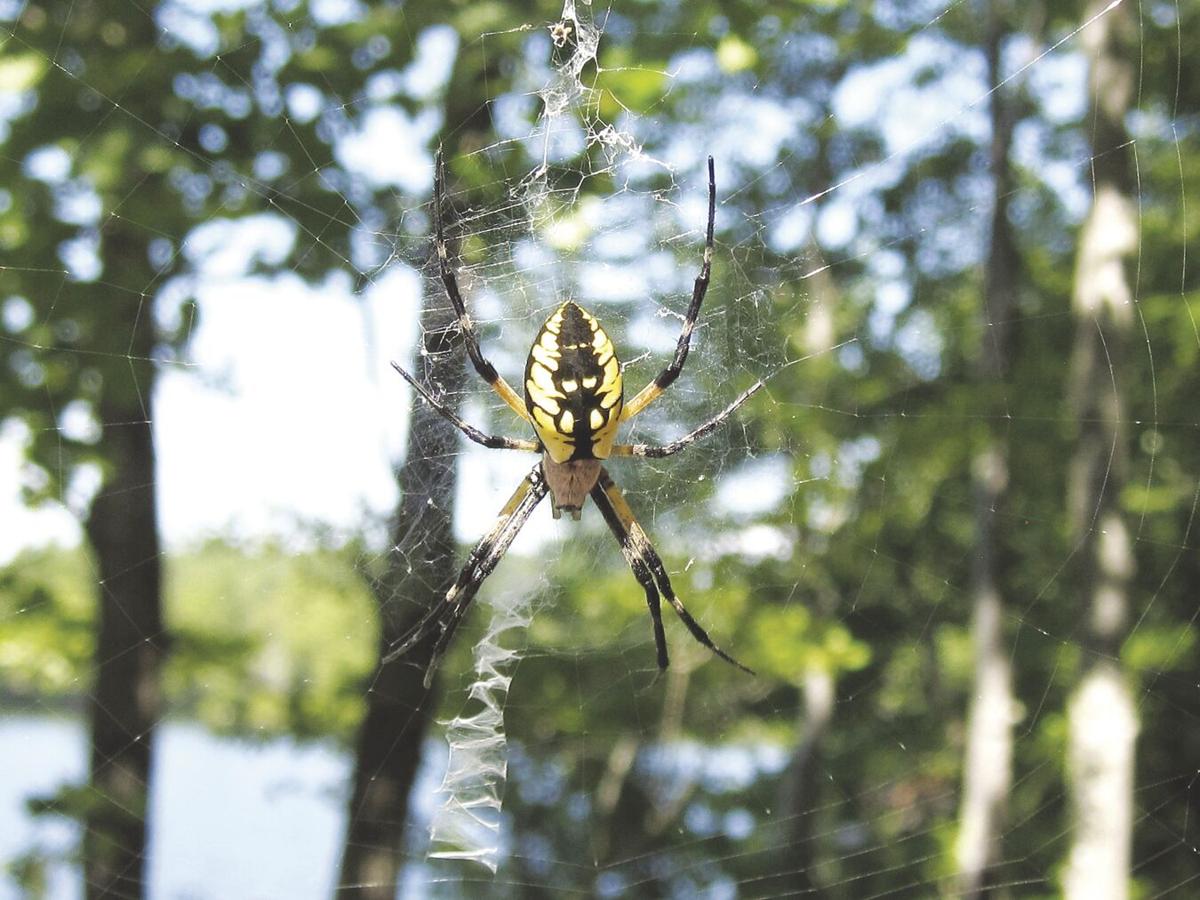 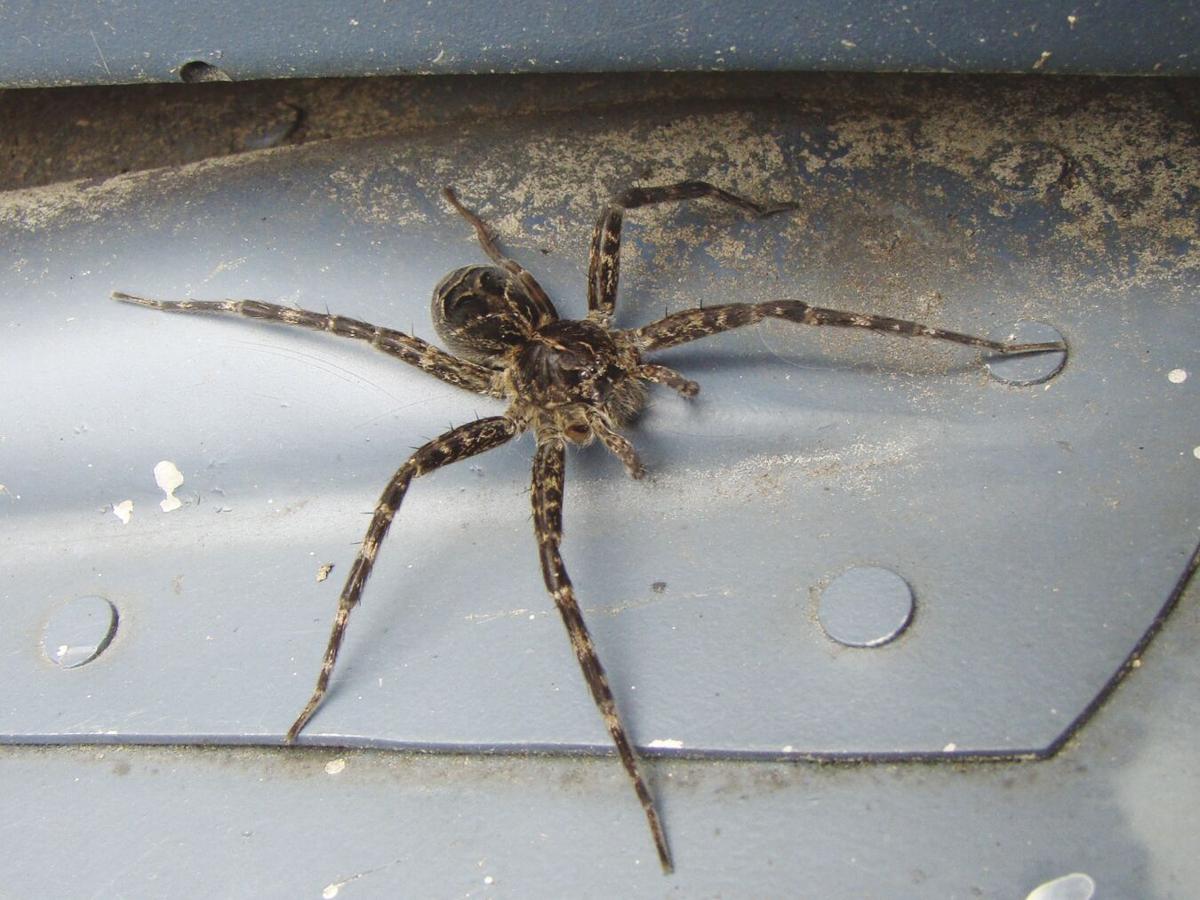 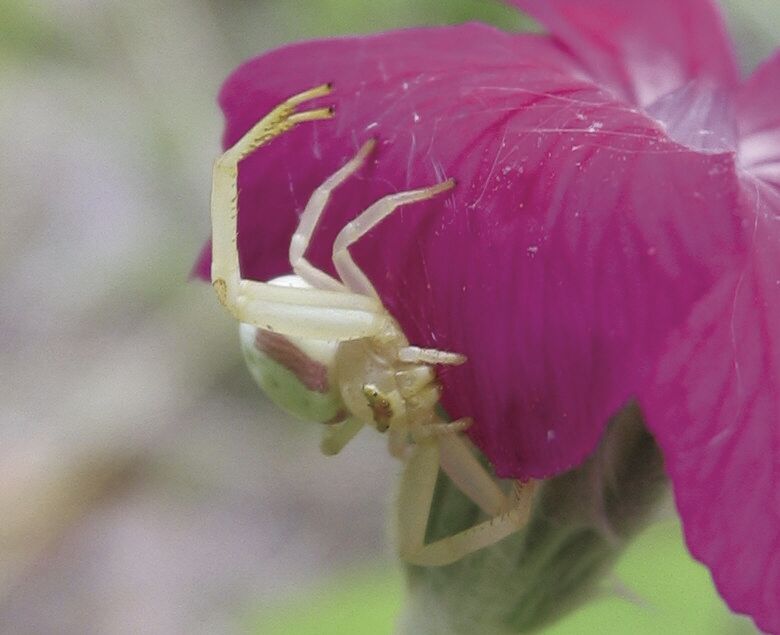 Summer in the Lakes Region brings with it a vast array of wild creatures, some large and conspicuous, some tiny and never seen; some loved by all, and others, well, loved by not many. Certain members of the arachnid family, commonly known as spiders, tend to fall into the latter category even though they are highly beneficial animals, mostly harmless, and when observed closely, often beautiful. Their primary benefit derives from being outstanding predators, often being the most important controller of insect pests in the home and garden.

The most familiar spiders are the web-building species which catch insects by spinning webs made of sticky silk. When an unsuspecting insect flies into the spider’s web the vibrations of the bug struggling to free itself alerts the spider that it has a customer and it dashes out to secure its prey. Why doesn’t the spider get stuck in its own web? Spiders are able to make different kinds of web material depending on their need. They build the frame of the web with sturdy, non-sticky material, and those strands are what they walk on. Then they spin the sticky stuff to fill in the gaps between the frame which catches their prey. As they approach their trapped victim they’ll either inject it with paralyzing venom or wrap it up in silk — sometimes both. It’s good to know that most spiders can’t bite people because their fangs are too feeble to penetrate human skin, but some can bite us. Fortunately there are only two dangerous spider groups in North America, the (black) widow and the (brown) recluse. But you’re unlikely to be bit by any spider as they will quickly run and hide from people since they know we aren’t food.

As an example of the benefits of spiders I once found a Black and Yellow Garden Spider that had caught a wasp — a large yellow jacket — in its web. I watched as it methodically used a third type of silk to wrap the wasp in a protective package to save it for later consumption. The large and bright Black and Yellow Garden spider is quite conspicuous and is common throughout New Hampshire.

Another type of arachnid known as jumping spiders don’t make webs; instead they attack their prey, either by stalking them, or simply hiding and waiting for them to come along. But even these spiders are capable of making silk for other purposes such as forming nests for their young or wrapping their food to preserve it. Some of these female spiders will stay near their nest when the new spiders hatch to defend them — unless they get hungry, then they might eat some of their own young.

One of the most fascinating (and prettiest) spiders in the Lakes Region is the Goldenrod Crab Spider, so named because it’s often found on goldenrod. This spider has the amazing ability to change its color based on the color of the plant it’s on, helping it hide from both its prey and its predators. I have found these on Ohio Spiderwort flowers, wearing their pink attire to match that of the flower. This spider doesn’t make a web with its silk, but has yet another use for it: As a female travels among the flowers it leaves a single string of silk behind it which a male spider can follow to find and mate with the female — the arachnid version of giving someone the key to their home.

The largest, and I’ll admit, scariest, of the spiders I’ve seen in New Hampshire is the Dock or Fishing Spider, which can grow up to three inches across, yet with a waxy substance covering their legs, they are able to walk on water. Similar to how a web-weaving spider knows when an insect is in its web, the dock spider can feel vibrations on the surface of the water and know an insect has fallen in the lake and is struggling to get airborne again. Dock spiders will hold onto the shore with their hind legs and let their sensitive front legs rest on the surface of the lake to detect vibrations and they are smart enough to differentiate the vibrations of a leaf falling on the lake from the vibrations of a floundering insect. Once they sense a stranded insect they’ll dart across the surface of the lake to catch their prey — and their large size means they’ll consume a lot of insects over the course of the summer.

As a member of the “nursery web spider” group, the dock spider uses its silk-making ability to both spin egg sacs as well as to build a nest to house its young which may number up 1,000 baby spiders in a single nest. The female carries the egg sac until they’re ready to hatch, at which point she spins the nest to protect its young and then will stay nearby to defend them.

These large and threatening-looking arachnids do have fangs that can bite through human skin but a bite is unlikely unless you catch one and hold it tightly in your hand. Like most wild animals, this creature wants nothing more than to escape from threats and will sprint away from humans. But that’s not much comfort if you come upon one in your canoe when you want to go for a paddle — there’s little doubt you’ll want to find a way to encourage your stowaway to abandon ship before you embark on your trip, and that might take a little creativity. But once it’s out, watch it scurry across the surface of the water on its way to find a new place to hunt for all those insects it sweeps up out of the lake. And remember, that spider, like most spiders, is your friend.