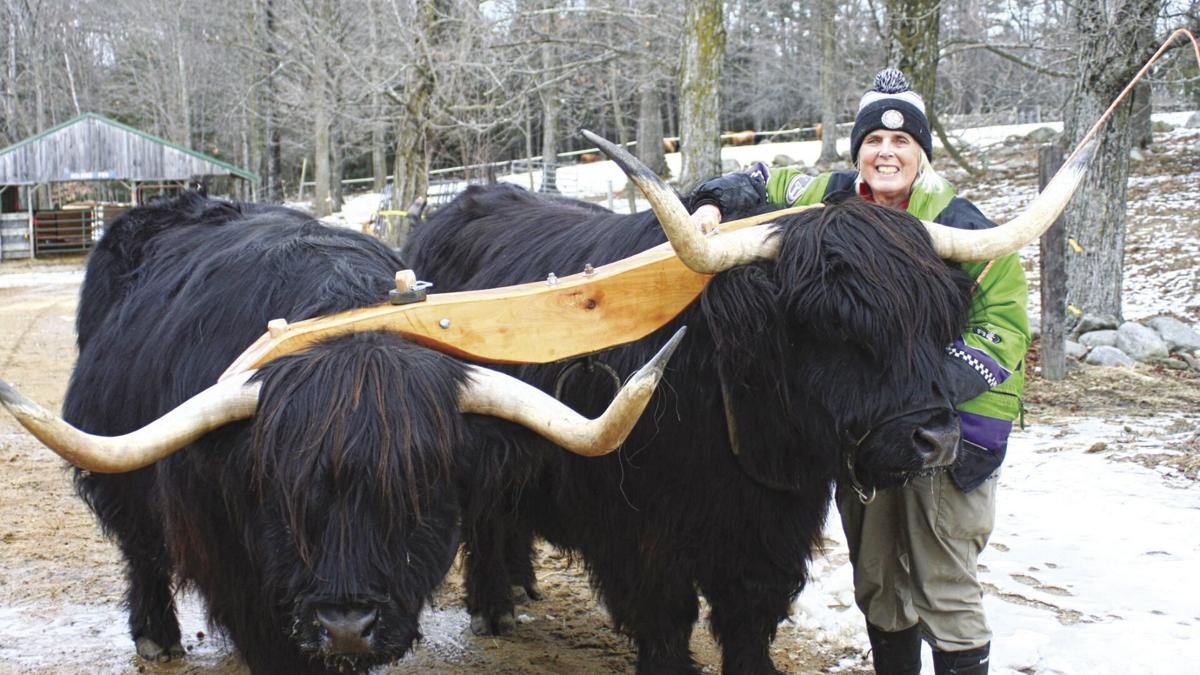 Author Carole with her eight-year-old Scottish Highlander oxen team. Stash is on the left and Topper is on the right. 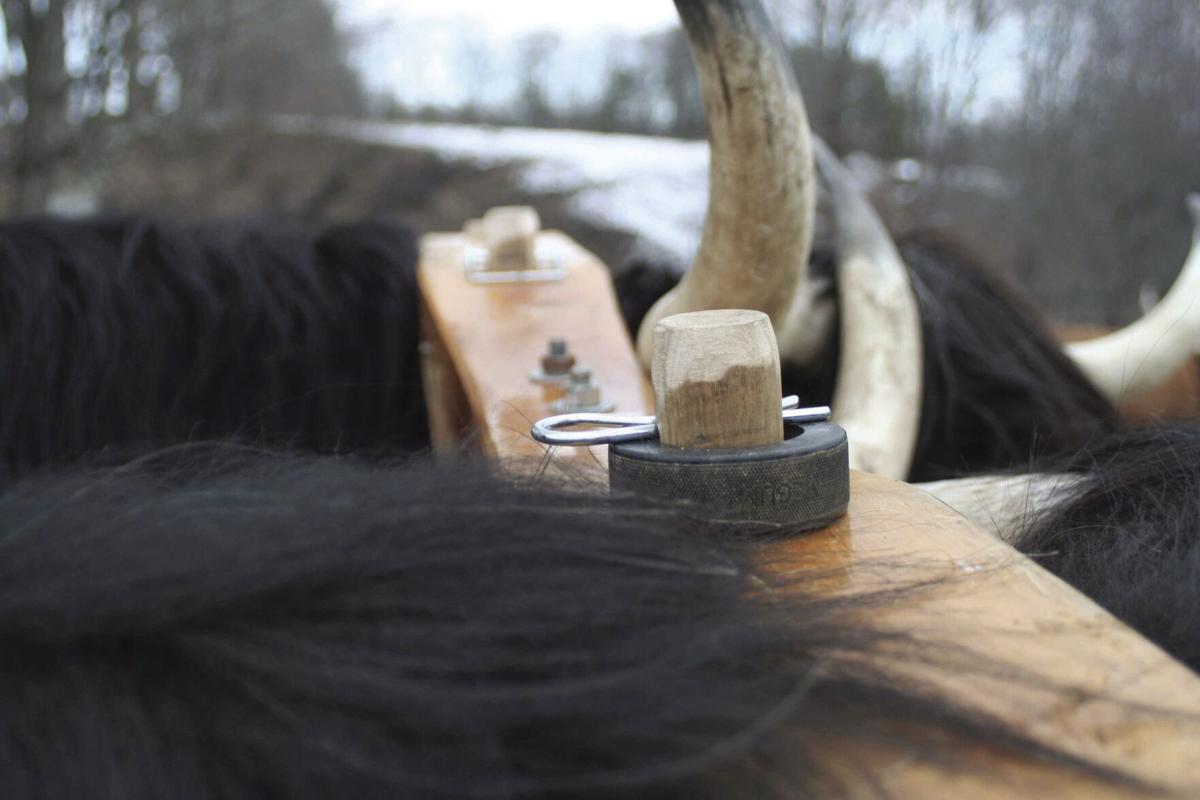 This is the pin securing Stash’s bow that came out during a recent work session.

Author Carole with her eight-year-old Scottish Highlander oxen team. Stash is on the left and Topper is on the right.

This is the pin securing Stash’s bow that came out during a recent work session.

Topper and Stash stood on the edge of a ravine, a 20-foot drop, with a log attached to their yoke. One more step and they'd go over the edge dragging the log with them. It would be a very messy tumble. I watched from behind, not sure what to do.

Despite this moment of high anxiety, working with a team of oxen is my special joy. So it was with some enthusiasm that, earlier that day, I'd yoked up my best team of oxen, Topper and Stash, 8-year-old Scottish Highlander steers. To do this, I place the thick, wooden yoke across their necks. It is held in place with a U-shaped bow under each ox's neck, inserted into the yoke, and secured with a metal pin. A chain attached to the yoke goes back between the animals and hooks to the load, whatever it is.

In non-pandemic years they perform as a team in the Hood Arena at the Hopkinton Fair. The arena, flat and free of rocks, allows me to move quickly in front, behind, or to the team's side without fear of either the oxen or me falling. This year, with no fairs to burnish their skills, I decided to have them haul logs out of the forest to be cut into firewood.

After almost a year off, my team needed a refresher course, so we spent several days rehearsing commands like "back" (back up), "haw" (turn left), "gee" (right), and the all-important "whoa." On Jan. 4, I was confident they were ready to go to work. They ambled to the worksite, following my voice commands, as I put them in position to pull the first log. Farm friend Art and my husband, Bruce, helped hook the chain to the yoke and then to a log while I stood in front of the team. On my command, Topper and Stash leaned into the yoke and charged up the hill dragging a 100-pound log while I walked in front. On my command, they stopped at the "landing zone" and waited while Bruce detached the log's chain.

We repeated this activity three more times. On the fourth pull, Stash, the off-ox (the ox on the right), strayed to the right, pulling Topper with him to the edge of the cliff. As they walked off course, I shouted, "Whoa," several times. If we had been in Hood arena, I could have moved in front using my goad stick to signal them to stop. On the uneven hillside, strewn with rocks, that was not possible. So I stopped calling, took a deep breath, and watched as they walked toward the edge. Then miraculously, they both stopped, four front hooves lined up with the edge of the ravine. We unhooked the log, and I got Topper to back up so the team could turn around.

Once they were turned around, we tried to hook up the log to pull it to the landing zone; Stash would not back up to allow the chain to be attached to the log. Until then, I had been calm and assertive, gently correcting them with voice and body language, but now I was getting frustrated. Cattle tune out commands given in frustration or anger. They will ignore direction from a frustrated or angry teamster.

Mentally tired, I could not clear frustration out of my thinking, so I decided to quit for the day. Unfortunately, more trouble was in store as they walked behind me toward home, pulling a tire for extra practice. The pin securing Stash's bow came out, and the bow fell, releasing him from the yoke. Confused by his new freedom, Stash ran off, leaving the yoke attached to Topper. I was able to pull the pin from Topper's bow, but the bow stayed wedged into the yoke. I stood out of range and watched as Topper swung his head while he swept the yoke in a circle, potentially knocking down anything in its path. Eventually, the bow slipped from the yoke, and Topper looked at me as if to say, "Whew, that was not fun."

I walked Topper to the barn, collected Stash, and picked up the yoke and bows lying on the road. Lessons I learned that day:

• Find locking pins that do not come loose.

• Sand the wooden bows, so they easily slide out of the yoke.

I had the vocabulary, but not the tone — oxen only respond when their teamster is calm and assertive, so that is what I have to work on.

Carole Soule is co-owner of Miles Smith Farm (www.milessmithfarm.com), where she raises and sells beef, pork, lamb, eggs, and other local products.