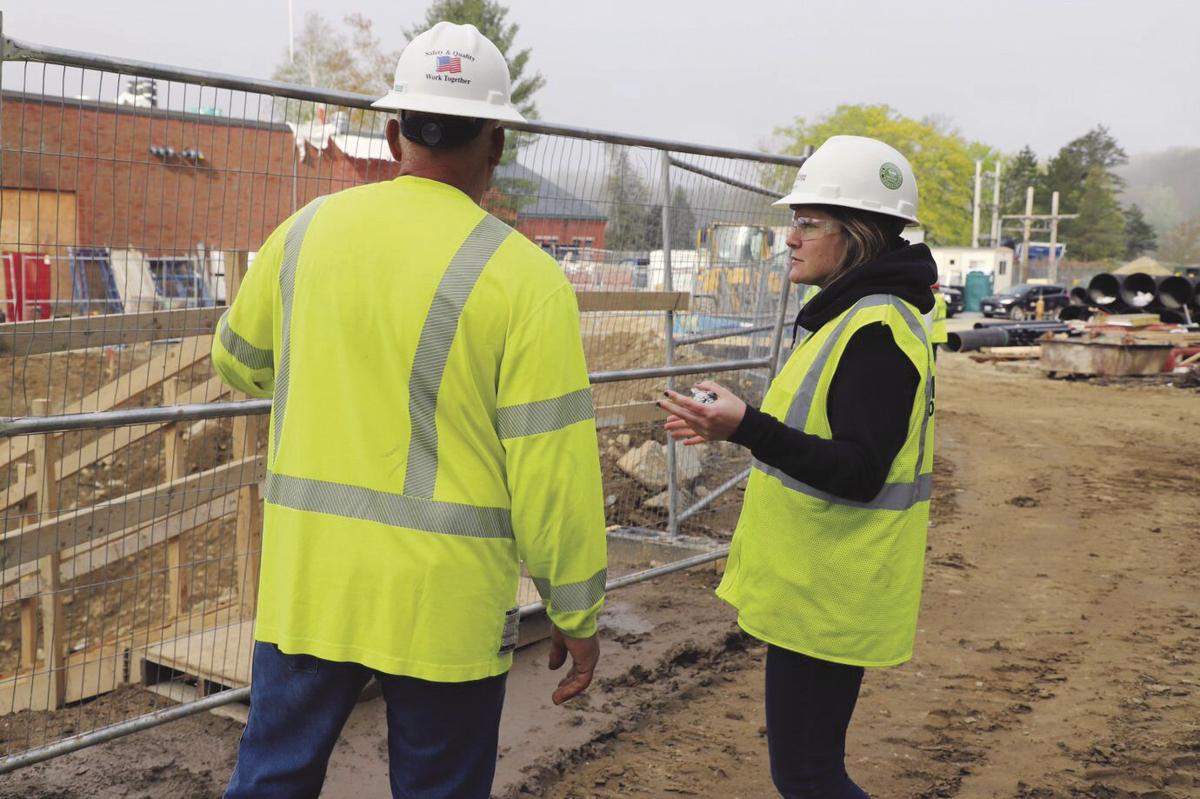 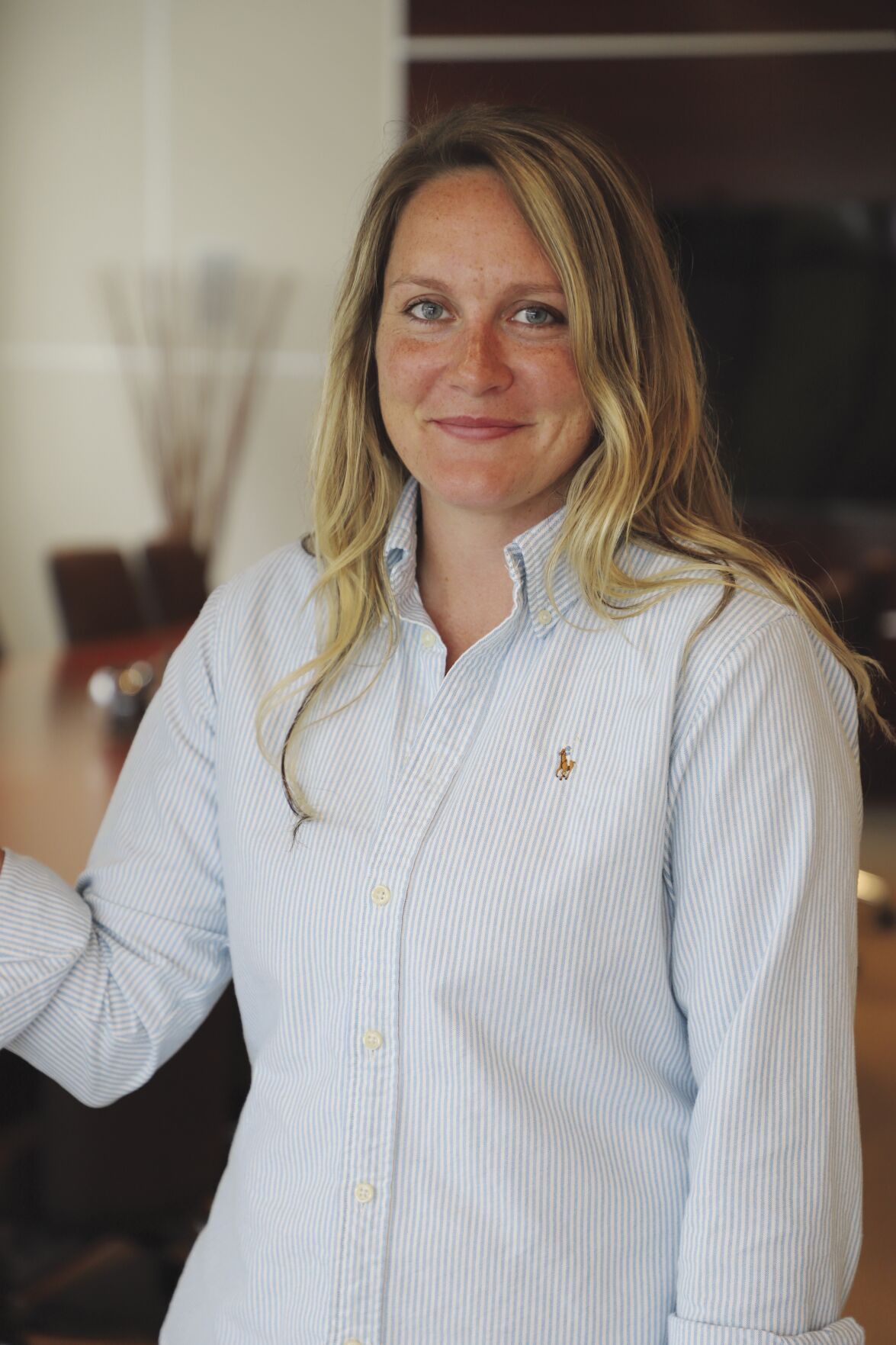 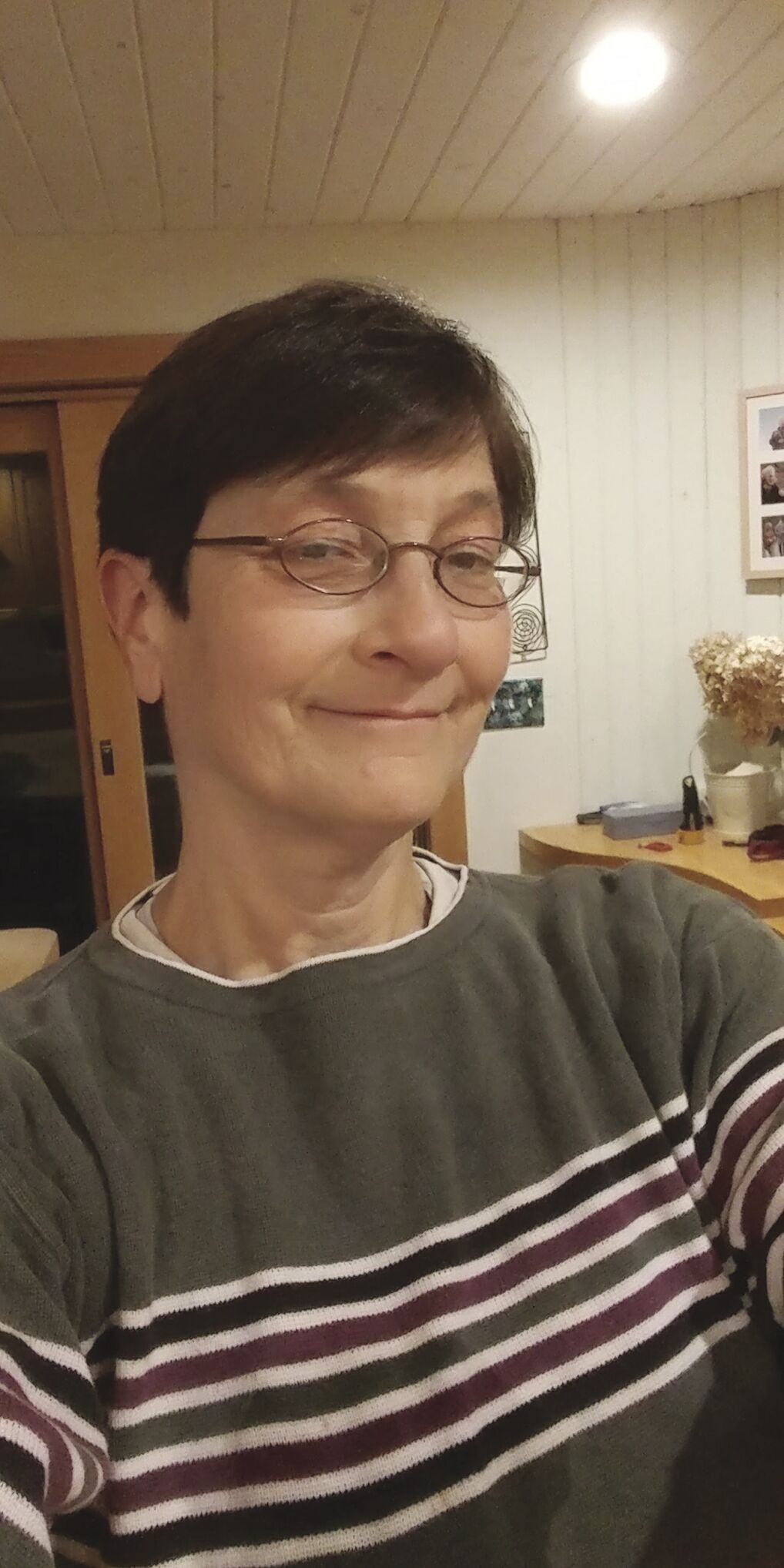 When Joanna Sharf launched her own business in 2010, she leaned into the fact that she’s one of few female master electricians. (Courtesy photo/Joanna Sharf) 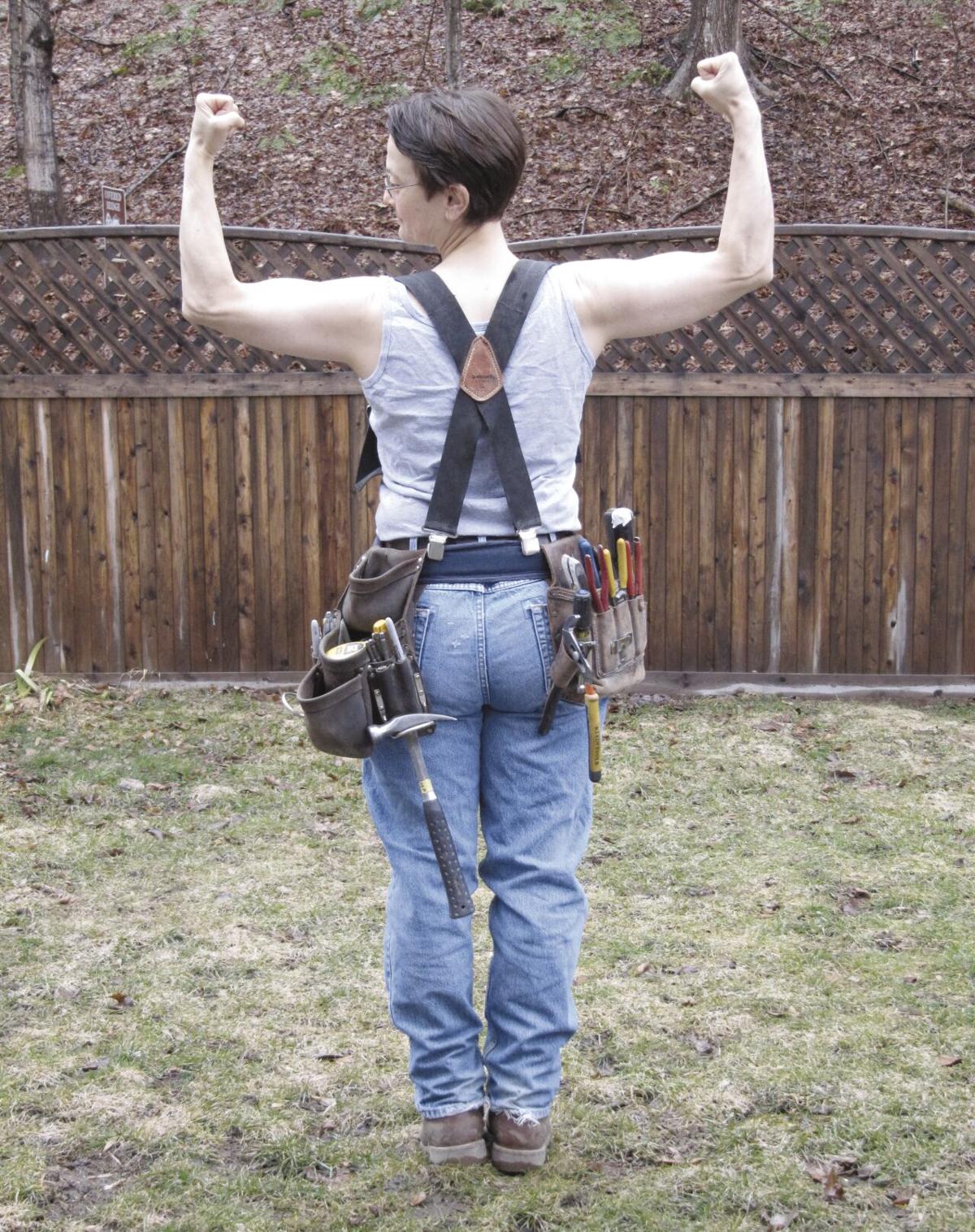 Joanna Sharf of Cornish was on an academic career path until she began an electrical apprenticeship in her 40s. (Courtesy photo/Joanna Sharf)

When Joanna Sharf launched her own business in 2010, she leaned into the fact that she’s one of few female master electricians. (Courtesy photo/Joanna Sharf)

Joanna Sharf of Cornish was on an academic career path until she began an electrical apprenticeship in her 40s. (Courtesy photo/Joanna Sharf)

Joanna Sharf had been working toward her doctorate in medieval literature, but after ten years of toiling she needed to face the fact that her career in academia wasn’t working out. She tried other options, like teaching and clerical work, but they didn’t seem quite right. She knew she wanted a more physical job, so in her 40s, Sharf began cold-calling electricians looking for an apprenticeship.

That was 18 years ago. Sharf, 61, is now one of a handful of female master electricians in the state. Her company, Cornish-based Emily Electric, has a name that plays on that fact, as well as her love of literature — that’s Emily for Emily Dickinson.

“It’s a really good career path to take and I wish more women would get into it,” Sharf said.

Now more than ever, she’s happy to have a safe and stable career. Apart from a few slow weeks at the height of the shutdown, Shaft has been busy and feels safe continuing to work. She credits her non-traditional career path for delivering that peace of mind.

“Unfortunately a lot of women’s jobs have just been cut out because of the pandemic,” she said. “I’ve been slammed.”

The economic impact of coronavirus has been centered on industries that employ a disproportionate number of women. More women than men have lost their jobs due to the pandemic, with 11.5 million women newly unemployed between February and May compared to 9 million men, according to data from Pew Research Center. That’s different from the 2008 recession, when men were twice as likely to lose their jobs. Hispanic women have been especially hard hit this year, seeing a 21% reduction in employment between February and May.

This can be explained by looking at the sectors most impacted by shutdowns. According to the U.S. Bureau of Labor Statistics, the industries most heavily impacted are: restaurants and bars; travel and transportation; entertainment; personal services (like daycare providers or hairdressers); retail; and sensitive manufacturing (like manufacturing). Many of those employ a disproportionate number of women, especially women without higher education.

On the other hand, many people working in the trades and in construction — industries where men are overrepresented — have had steady work throughout 2020.

“We have not stopped,” said Catherine Schoenenberger, current president of the Granite State Chapter of the National Association of Women in Constructionand past national president. “It’s a great opportunity for women to access [these careers] at this point and get a fair wage.”

Women make up only two to three percent of skilled tradespeople like electricians and plumbers, and 10 percent of workers in construction, Schoenenberger said. Despite efforts to get more women into the field, that percentage has been the same since the 1970s.

“It’s been 50 years, and that hasn’t really moved all that much,” Schoenenberger said.

While there may be biases against women in construction, Schoenenberger said that too often women hold themselves back.

“They don’t feel like they’re as qualified as someone who has been on the job,” she said. “But chances are they’re just as skilled, smart and able-bodied.”

To try to close the gap, Schoenenberger has helped organize Construction Career Days for New Hampshire High schoolers for the past ten years. Networking events like a “hard hats and high heels happy hour” allow female construction professionals to network and mentor people new to the field. On a national level, NAWIC is working to attract women to the sector by focusing on “emerging professionals” rather than just “young professionals” in order to reach women like Sharf who are interested in a mid-life career change.

“They might not have experience in the construction industry, but they have world experience,” Schoenenberger said.

Krista McCullough, the safety manager at Methuen Construction Company in Plaistow, is only 29, but she’s already been in the field for seven years. After getting her degree in safety sciences, McCullough did an internship with NASA, but it wasn’t as challenging as she was hoping for. A construction site near the NASA facility caught her interest.

“That’s when I realized maybe construction would best fit my personality,” she said.

Working in construction can be intimidating, especially initially, McCullough said.

“Walking onto a job site I have three strikes: I’m young, I’m female and I’m safety,” she said, referring to her position as safety manager, in which she’s responsible for enforcing safety protocols on site. “As a blonde female coming to the construction industry you’re judged immediately.”

One foreman in particular was skeptical of McCullough, but has since become one of her biggest advocates, she says.

“It’s a great career if you can stick it out and earn everybody’s respect,” she said. “It can be an intimidating industry, but if you show you want to learn and work hard, those you are working with will be there to help you succeed.”

Elizabeth Morse, an assistant project manager at Lewis Builders Development, Inc. in Atkinson grew up knowing that women could thrive in construction — her mom owns the company.

“I look at the way she lived her life and it takes away those [stereotypical gender] roles for me,” Morse said.

Even so, she went to school for nursing, finding herself drawn to caregiving roles. But after college her father, then the general manager of Lewis Builders, asked her to come work for the family company.

Morse said that nursing and construction are both accessible to women with the right knowledge.

“With nursing, you have to be book-smart as much as common sense smart. Construction is a lot of common sense, backed by book knowledge and experience.”

Although most people think about physical labor and getting dirty when they picture construction work, there are all sorts of careers available in the industry, the women in this story said. Some, like estimating, are less hands-on. But even the physical work and heavy lifting is easily handled by women, Sharf said.

“You don’t have to do it with pure brawn,” she said. “There are ways to figure out how to do it.”

Getting started can be the most difficult part, but Schoenenberger said that women in the trade and construction industries are keen to help others learn about the field. As more women become involved, it will be easier for other females to see where they can carve a career for themselves in construction, she said.

Eighteen years ago, that’s what helped Sharf. After calling around looking for an apprenticeship, she finally found one. The man who hired her had a female apprentice before.

“I was very lucky,” Sharf said. “That woman did the hard work and I was able to ride on her coattails, thankfully.”