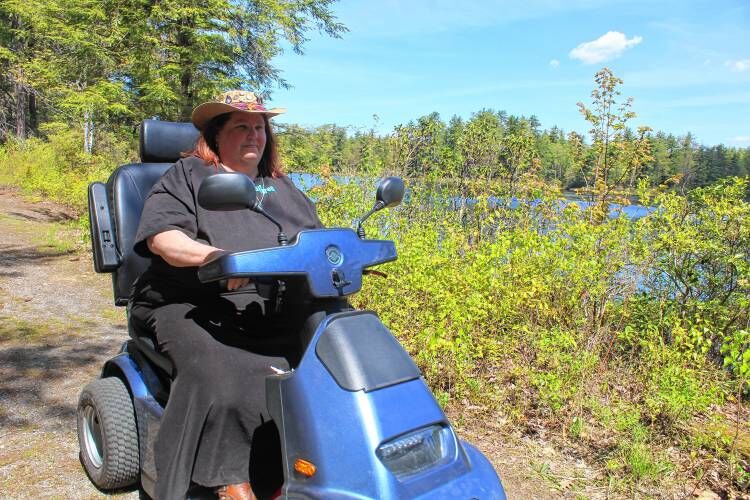 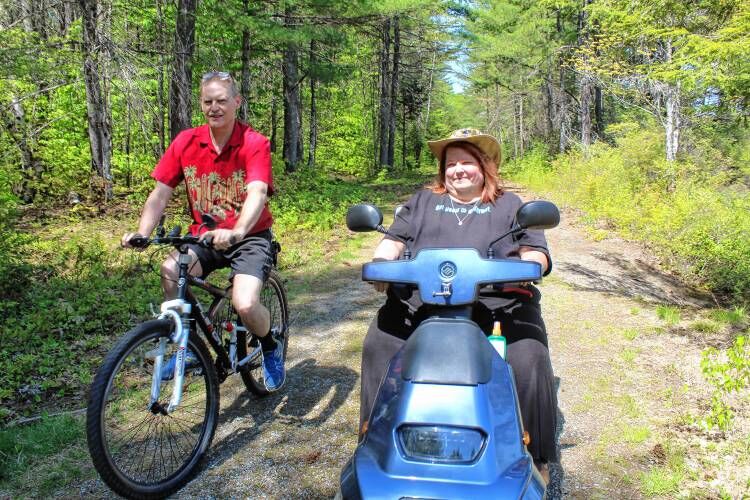 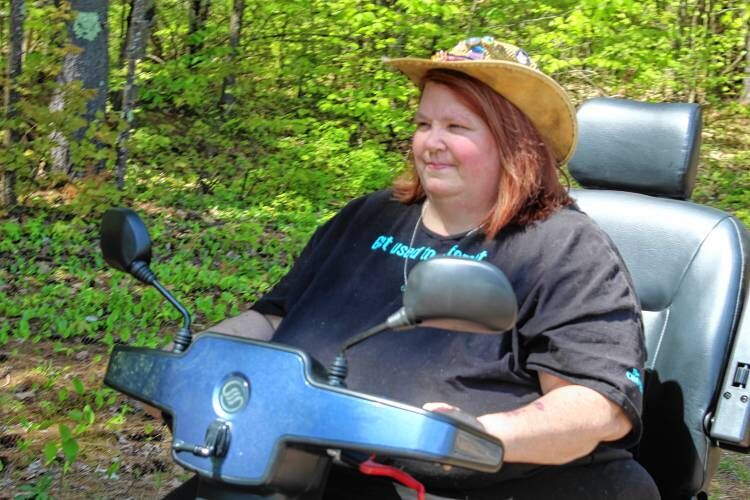 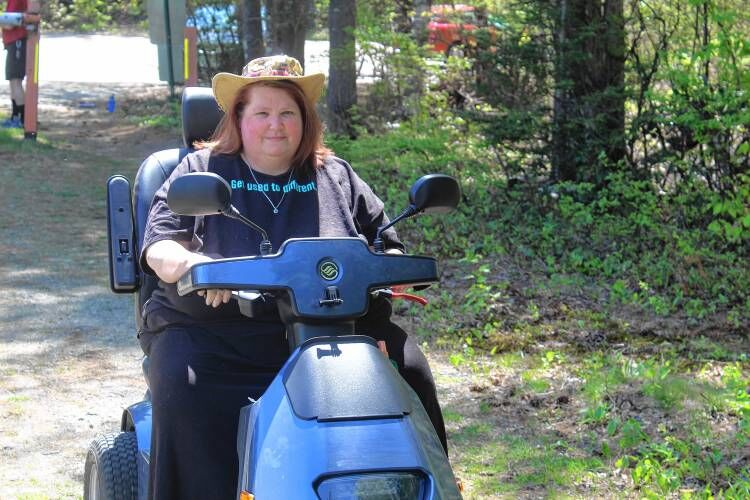 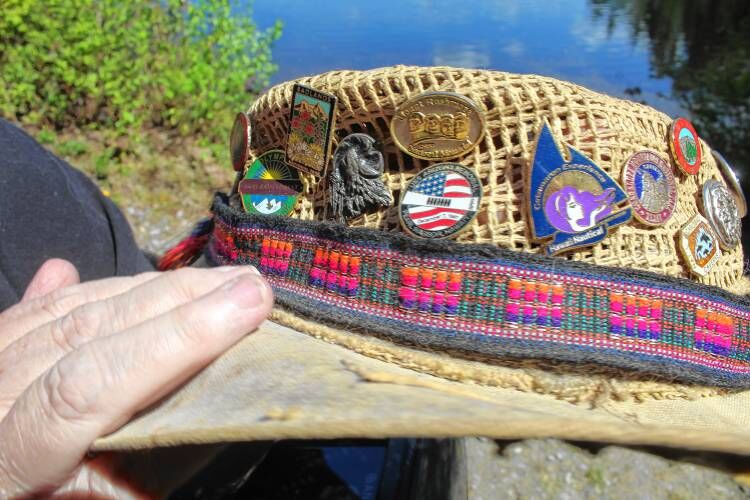 Just before embarking on the Mason-Greenville Rail Trail, Aislinn Graves proudly showed off her straw boater hat, full of pins from national parks from all over the country.

“Most little girls, they want to grow up to be a nurse, or a ballerina,” Aislinn, who’d visited most of the national parks west of the Mississippi by the time she was seven years old, said. “Me, I wanted to be a national park ranger.”

These days, Aislinn is back to immersing herself in nature on every trail she can manage in her new mobility scooter, which is only a fraction of the many hiking and walking trails scattered across the region.

“I have always been athletic,” Aislinn, a resident of New Ipswich said. “Then, in 1992, I was in a car accident. It was bad. I damaged my spine.”

Aislinn is able to walk, but only for short distances before she’s in agonizing pain, she said.

In addition to her spinal injury, Aislinn also has polycystic ovary syndrome, or PCOS. One of the issues that comes with PCOS is weight gain, and Aislinn said it was well managed before her accident, but as soon as her mobility was limited, so was her ability to exercise.

“After I got hurt, my weight just ballooned,” Aislinn said, which has only made accessibility harder to manage.

She had a regular manual wheelchair to assist her with some tasks, but said she wanted to get back out into the great outdoors – an early and enduring love for her. She and her husband, David Graves, also an avid hiker, began to save up for an electric mobility scooter – hopefully one that would be sturdy enough to let her explore local trails.

The couple has cobbled together a list from various sources of wheelchair accessible trails, and ones that are likely accessible, like the state’s list of trails converted from former railway lines, and are making it their mission to explore them all. Aislinn is documenting the process on her YouTube channel, “Wheels in the Wilderness.”

David has his own channel, “Hind Feet in High Places,” for his own hiking adventures, including winter hiking and trails where Aislinn can’t join him. Aislinn said, she hopes can be a resource for people who share her situation. Because she knows just how powerful it can be to regain access to something she once thought may be lost to her.

“I can’t hike Mount Monadnock. There’s just no way for me to get up there,” Aislinn said. “But there are things that I can do.”

A few years ago, the couple made their first foray, with Aislinn’s non-electric wheelchair, to the Dutton Brook Trail with views of Crotched Mountain in Greenfield. A short but completely wheelchair-accessible trail, Aislinn said it was the first time for a long time she was able to recapture that feeling.

“I was in tears. I had missed being out in the wilderness so much. A lot of this is just about getting me back out into the wild,” Aislinn said. “And helping other people do the same. And, just raising awareness that this is needed.”

Aislinn said it is common for people with mobility issues to become isolated, or deal with mental health issues such as depression. She herself has been battling with chronic pain since her crash. She said this new endeavor is a way for her to get outside, enjoy the fresh air and sunshine, and socialize with friends.

“When I’m out here, looking at this beautiful land, I’m not thinking about how much I hurt,” Aislinn said.

David said they have done some research on accessible trails, and he’s compiled a list of 44 rails-to-trails in the state for them to explore.

“I’m a list guy, I like checking boxes,” David said. “So we’ll check them all out eventually.”

The rail trails aren’t all guaranteed to be accessible, Aislinn said, but there seem to be a dearth of resources about accessible trails in the state.

“There’s just not a lot for handicapped people or the mobility impaired,” she said.

Bart Hunter, a land steward for the New Hampshire Forest Society, and head of Wilton’s Conservation Commission, said he has done work creating and clearing trails and bridges for decades, including on Wilton’s conserved Heald Tract. Mobility issues are always a concern, he said, but not always possible to accommodate given New Hampshire’s landscape and available land.

“I have a pretty good idea of what people with mobility issues need. But most of the time, I just end up scratching my head, because we have so many barriers,” Hunter said. “In Wilton, we have properties with easements, but trying to get anything done is already difficult, just for a lack of volunteers. Then you have stone walls, beavers that can flood the trail, hills…” Hunter said.

Hunter said the result is that Wilton has several trails or a portion of trails that a heavy-duty mobility device might be able to navigate, but nothing truly accessible the whole way through.

“I’ve got this in mind, it’s not something I ignore, but it’s something I continue to scratch my head over,” Hunter said.

Lisa Beaudoin of Peterborough, executive director of ABLE NH, an advocate group for people with disabilities, said there are a dearth of outdoor recreation opportunities generally for people with mobility issues.

“In the Monadnock region, there is very little for swimming, hiking or outdoor recreation of all types,” Beaudoin said. “That is problematic.”

Beaudoin said the only way to increase those opportunities is to ensure that the community values making them. The concept of “universal design” – designing buildings, products or environments to make them accessible to all people, regardless of age, disability or other factors – has to be embraced by the entire populace when redesigning or building new environments.

Aislinn said not even trails meant to be accessible have been, even in only a few weeks of exploring.

A week ago, the couple tried to do an exploration of the Milford-Brookline Rail Trail. Unfortunately, Aislinn said, while the trail head appeared to lead to a well-maintained path, there were strategic blocks placed, in what the Graves assumed to be discouragement for all-terrain vehicles such as four-wheelers, which aren’t allowed on the trail. The couple looked for alternate entrances, but weren’t able to find any that allowed access to Aislinn’s mobility scooter.

While some trails don’t allow the use of wheeled or motorized vehicles, mobility aids are classified on the same level as wheelchairs and are protected by the Americans with Disabilities Act, so Aislinn should be able to use her scooter on trails that prohibit other recreational vehicles.

“It was very disappointing,” Aislinn said. “No matter how far we went, it became clear it wasn’t going to pan out.”

The couple eventually had to give up on the Milford-Brookline Trail, but on their way home, found the entrance to the Mason-Greenville Rail Trail, which they returned to the following weekend and were able to successfully traverse. Aislinn said she’s prepared for not every endeavor to work out – she’s packed a bag with her Kindle, watercolors and sketchbook or knitting, in the event David needs to scout out the trail to ensure it’s passable – but said even when the trip is a flop, she still considers it part of the adventure.

“I’m inviting people to explore this with me. Come with me, and do as much as your can. That’s why I started this in the first place,” Aislinn said.