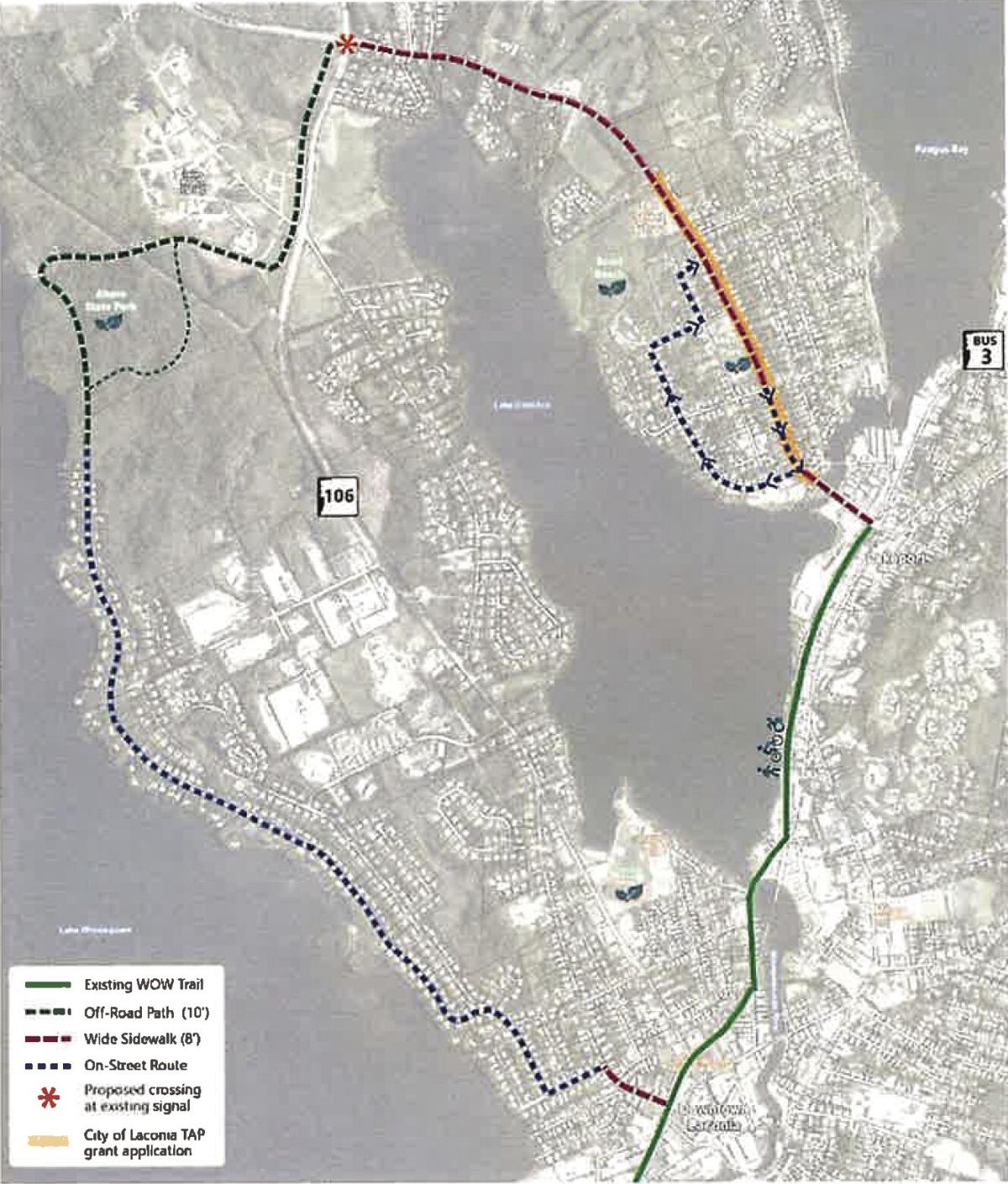 This map shows the proposed Opechee Loop trail, as well as the existing portion of the WOW Trail that connects Lakeport to downtown Laconia. (Courtesy image/City of Laconia) 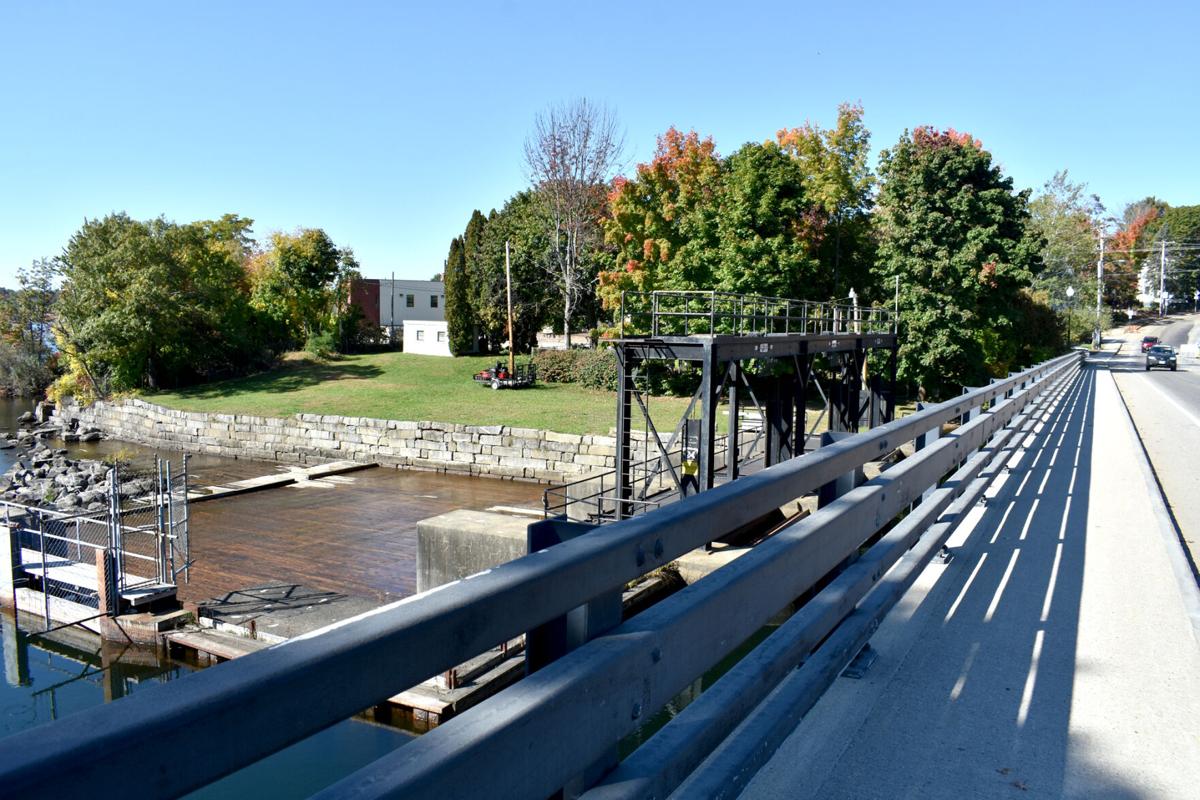 Plans were revealed this week to extend the WOW Trail down Elm Street as part of a loop around Lake Opechee. Shown here, the Elm Street bridge over the Lakeport Dam. (Adam Drapcho/The Laconia Daily Sun photo)

This map shows the proposed Opechee Loop trail, as well as the existing portion of the WOW Trail that connects Lakeport to downtown Laconia. (Courtesy image/City of Laconia)

Plans were revealed this week to extend the WOW Trail down Elm Street as part of a loop around Lake Opechee. Shown here, the Elm Street bridge over the Lakeport Dam. (Adam Drapcho/The Laconia Daily Sun photo)

LACONIA — A proposed adjunct to the WOW Trail would provide an extended route for bikers, joggers, or those looking for a leisurely and scenic stroll — all within the city limits.

The roughly 5-mile route — called the Opechee Loop — would start where the WOW Trail currently ends at Lakeport Square, travel the length of Elm Street, go through part of the former State School property and Ahern State Park and then travel the entirety of Shore Drive, and parts of Holman Street and Gale Avenue from where it would run along a three-block-long section of Pleasant Street to where it would reconnect with the lower portion of the WOW Trail in Veterans Square.

Beetle envisioned that the funding would come from both private donations, grants and public funds.

The loop would be built bit by bit, he said.

The first section being considered would be on the lower part of Elm Street between Lakeport Square and Franklin Street where the sidewalk would be widened to better accommodate the bicycles, along with the higher volume of foot traffic.

The portion of the route from Franklin Street to Hickory Stick Lane will be done in conjunction with the installation of new water, sewer, and drain lines along that portion of Elm Street.

Funds to pay for the infrastructure to accommodate that section will come from the Transportation Alternatives Program, a federal program managed by the state, according to Public Works Director Wes Anderson. The city has received more than $1 million from that funding source which will cover 80 percent of the cost, with the city picking up the other 20 percent.

A secondary route following Franklin Street would allow users to bypass the steep section of Elm Street between Franklin and School streets.

In time the route would follow the upper part of Elm Street from Hickory Stick to the traffic lights at the Elm-North Main-Parade Road-Meredith Center Road intersection.

Beetle said that a trail would need to be built across land currently owned by the state between Meredith Center Road and Right Way Path. The trail would utilize some parts of the existing Ahern State Park road, but some sections would need to be specially built, he said.

He said little work would need to be done to accommodate where the trail would run along Shore Drive, Holman Street and Gale Avenue. Some construction would be needed for the final stretch on Pleasant Street, however.

Combined with the two miles of the WOW Trail between Veterans Square in downtown Laconia, and Lakeport Square, the new route would provide a 7-mile, multi-use trail for non-motorized recreation that loops around Lake Opechee.

The initiative will add to the city’s recreational opportunities.

He said that the WOW Trail Board is in full support of the undertaking. While the route is not part of the WOW Trail, “It could be a piece of the solution to get to Weirs Beach,” he said.

Efforts to extend the WOW Trail alongside the rail line between Lakeport and Weirs Beach have been stymied by opposition from those living along the right of way in the South Down and Long Bay condominium communities who oppose having the trail go through their gated community.

Beetle said the two biggest challenges which the Opechee Loop faces are getting the necessary funding and devising a layout for the route through areas where there is limited space for the trail.

It's one thing to run it along unused trail tracks, and sections of land that are near the lake or through wooded public space, but running down Elm St., Holman St. and Shore Drive, all residential neighborhoods is idiotic and insane.

I'd say Alan Beetle's vision of grandeur are a little out of control and needs to reign in his vision to areas of no use or wooded areas that can be accessed without disturbing the residents.

I have a feeling many will be opposing this absurd vision. It was shocking to read about this for the first time in the local newspaper, and there appears to be no consideration for residents living in the proposed areas for the trail. I live on Franklin St. and enjoy my small, quiet peaceful street I pay taxes towards. Phase 1 partial street work had already started this summer to replace piping; sidewalk was extended, trees taken down, grass paved over and crosswalks painted in. Was this anticipation for the trail? Phase 2 will come across our front yards, trees will be gone, grass paved over and no more street parking allowed. Our quiet neighborhood will become the main entrance, not the alternate route as the proposal states. Why would patrons climb the Elm St. hill with flowing vehicle traffic when they can trek through a peaceful scenic neighborhood? This trail will turn these residential streets into highways of foot, bike and animal traffic for all residents and non-residents. Who will maintain the cause and effect of the added higher volume of traffic outside our door steps, devalued property and increased taxes? Residents are all for making Laconia an enjoyable place to live and play, but we don't want a trail running across our front doors and have no say about it!