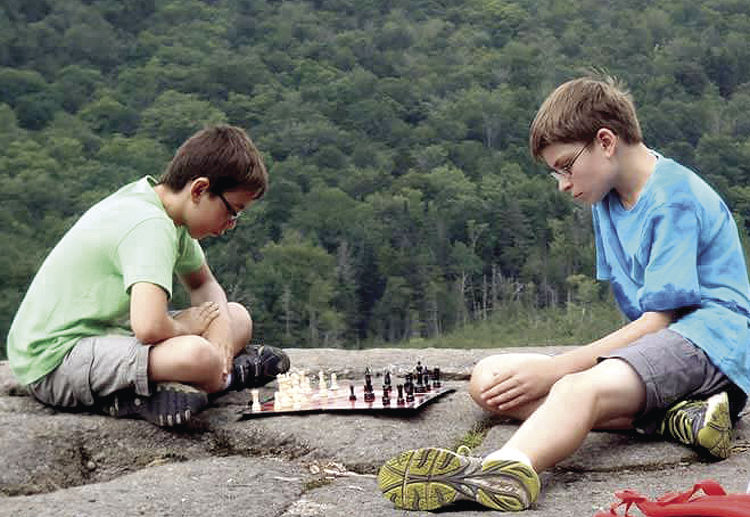 Two boys attending Camp Kabeyun in Alton, play chess on a mountain summit during a hike, as shown in this photo  from the camp's website. Camp Kabeyun, like virtually all residential camps in the state, is closed this summer. Kabeyun's director, Ken Robbins, said the state's COVID-19 guidelines for youth camps were incompatible with the kind of experience it seeks to offer campers. "It would have changed every program we offer," he said. (Courtesy photo) 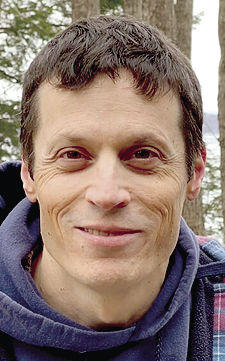 Two boys attending Camp Kabeyun in Alton, play chess on a mountain summit during a hike, as shown in this photo  from the camp's website. Camp Kabeyun, like virtually all residential camps in the state, is closed this summer. Kabeyun's director, Ken Robbins, said the state's COVID-19 guidelines for youth camps were incompatible with the kind of experience it seeks to offer campers. "It would have changed every program we offer," he said. (Courtesy photo)

LACONIA — The COVID-19 crisis has left youth camps across the state in a precarious position, and some may not survive. That was the message camp leaders gave to U.S. Sen. Jeanne Shaheen in a conference call Thursday.

“Camps have closed and the future of camps is uncertain,” Erika Connors, the owner of a day camp in Manchester and a state representative, said during the hour-long session.

The participants represented a variety of residential and day camps across the state, including three operating in the Lakes Region.

Some camp leaders said federal stimulus money, such as the Payroll Protection Program, have so far helped them keep their heads above water financially. But those who operate residential, summer youth camps pointed out that their facilities did not qualify for the assistance, nor do they qualify for assistance being made available under another program called the Main Street Relief Fund.

They asked for Sheheen to go to bat for them so that they could get some financial relief under any future federal COVID bailout legislation. Shaheen noted that a $3 trillion bailout bill backed by Democrats has passed the House, but is stalled in the Senate, where Republicans hold a majority.

“We need to provide additional help to people, whether to camps or families, or others,” Shaheen said, adding that she hoped some pressure could be put on Senate Majority Leader Mitch McConnell to let the Heroes Act proceed through the Senate.

Ken Robbins, the president of the New Hampshire Camp Directors Association, said 95 percent of the 100 overnight youth camps in the state decided not to open this summer, largely because the COVID guidelines put out by Gov. Chris Sununu’s office, while appropriate, were either unfeasible to implement or would take away from the experiences or feel the camps have traditionally given their campers.

"Summer camp is all about bringing kids together, but these guidelines are about keeping kids apart," Robbins said.

Robbins, who is also director of Camp Kabeyun in Alton Bay, explained the problem with implementing the COVID guidelines at Kabeyun prior to the conference call.

“We have a completely elective program," he said. "Every morning in the dining hall the kids decide what activities they want to participate in that day. We wouldn’t have been able to do that under the guidelines, which require that small groups and youngsters and their counselors have to stay together for the whole session.”

“We knew the guidelines would be hard, but these are really hard,” Robbins said. “It would have changed every program we offer.”

Robbins told Shaheen that among members of the Camp Directors Association who responded to a recent survey, 17 percent said they would either be closed or at risk of closing by this time next year. Based on the survey, Robbins calculated that would mean that 25 residential youth camps might not survive the COVID crisis.

For day camps, the challenges are different.

Chris Emond, executive director of the Boys and Girls Clubs of Central New Hampshire, said the clubs’ youth centers and other like it are waiting to learn how schools will be operating when classes resume in another two months.

“This fall we are facing a potential challenge if schools go to a hybrid schedule, with kids in school one day and home the next,” he said. “If that happens we will need staff to help the kids with distance learning.”

Emond also said that, because some people are earning more staying home because of enhanced unemployment benefits provided by the CARES Act, the Boys & Girls Club is finding it hard to recruit people for positions it is looking to fill.

“We need to attract qualified staff,” he said. “If we're going to have kids all day the Boys and Girls Club will be playing a major role in assisting the schools with the kids.”

The pressure is on, Emond noted, because in the coming weeks many parents who were laid off when the COVID crisis hit in March will be going back to work, and others who have been working from home are eventually going to be told to return to their offices.

Shaheen said that the extra $600 a week in unemployment benefits now being provided under the CARES Act will run out at the end of next month.

“We need to figure something out for the next round (of COVID stimulus) because we need to get people back to work,” she said.

“The impact on camps has been unimaginable,” said Scott Brody, chair of the American Camp Association. Camps are a $20 billion industry nationwide, and have lost about $16 billion because of the pandemic. He said more than 75 percent of overnight camps are not operating.

“In order to operate in this environment they have either had to delay their openings and reduce numbers. This is not economically feasible,” he added.

Camp Sno Mo, a camp in Gilmanton for children with disabilities and special needs which is operated by Easterseals New Hampshire in conjunction with the Boy Scouts, made the decision not to open this year long before the state guidelines for summer camps were released.

“Our campers are medically fragile,” said John Soucy, the organization’s vice president for programs. “We felt we needed to give the parents of campers plenty of heads-up,” he said, explaining why the decision was reached before the guidelines were announced. “It would have been difficult to keep (the campers) socially distant.”

During the conference call, Soucy pointed out that a great deal of the money to operate the camp is raised by the New Hampshire Snowmobile Association, and he worried that the group will have difficulty in the coming months holding its usual fundraising events because of the continuing limitation on the size of gatherings.

After the call, Soucy said he is unsure a present how Sno Mo might operate next year.

“I am not sure what is will look like,” he said. “But we’ll be running again.”

LACONIA — Bob Lawton stood next to a poster in Funspot showing a fortune telling machine he once owned.