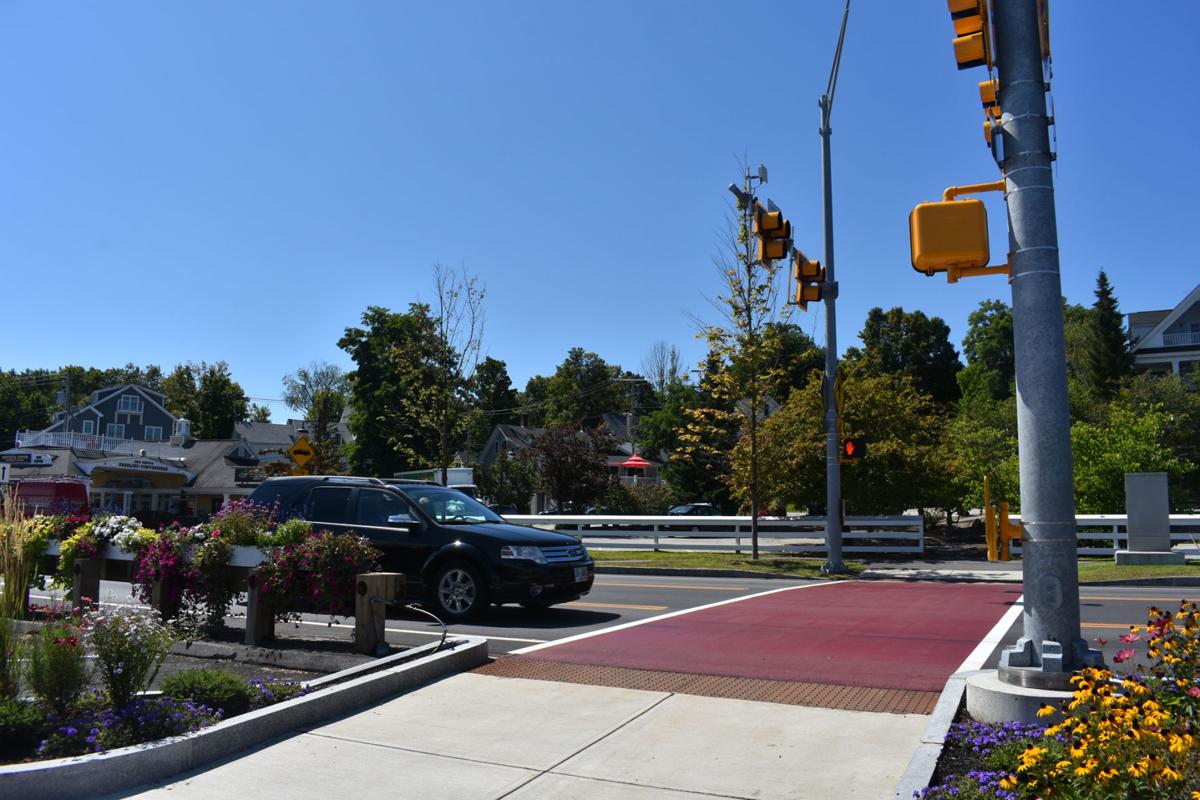 A car approaches a crosswalk, which went into operation earlier this year, near the town docks in Meredith. The signaled walk was intended to improve safety and traffic flow, however, many critics say it has made both worse. (Adam Drapcho/The Laconia Daily Sun photo) 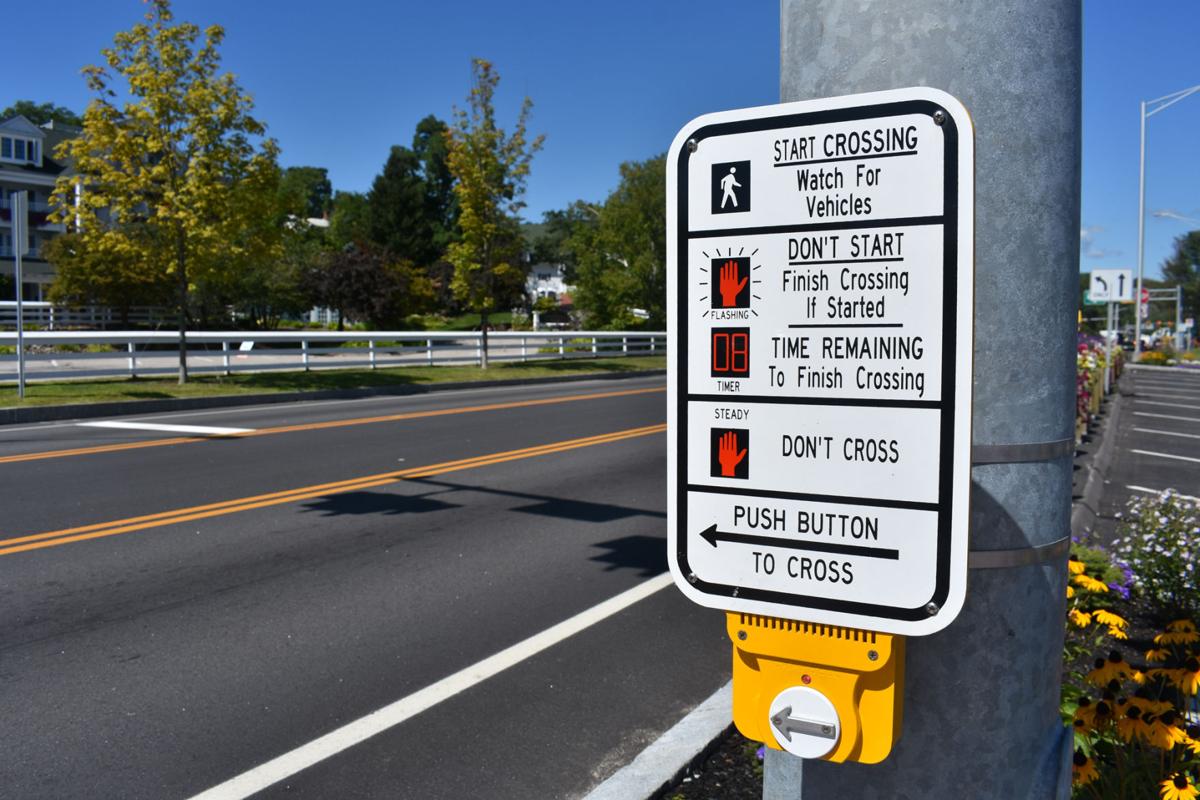 Despite a sign instructing pedestrians to wait until the white "walk" symbol appears, many pedestrians cross against the signal if drivers stop before they're supposed to. (Adam Drapcho/The Laconia Daily Sun photo) 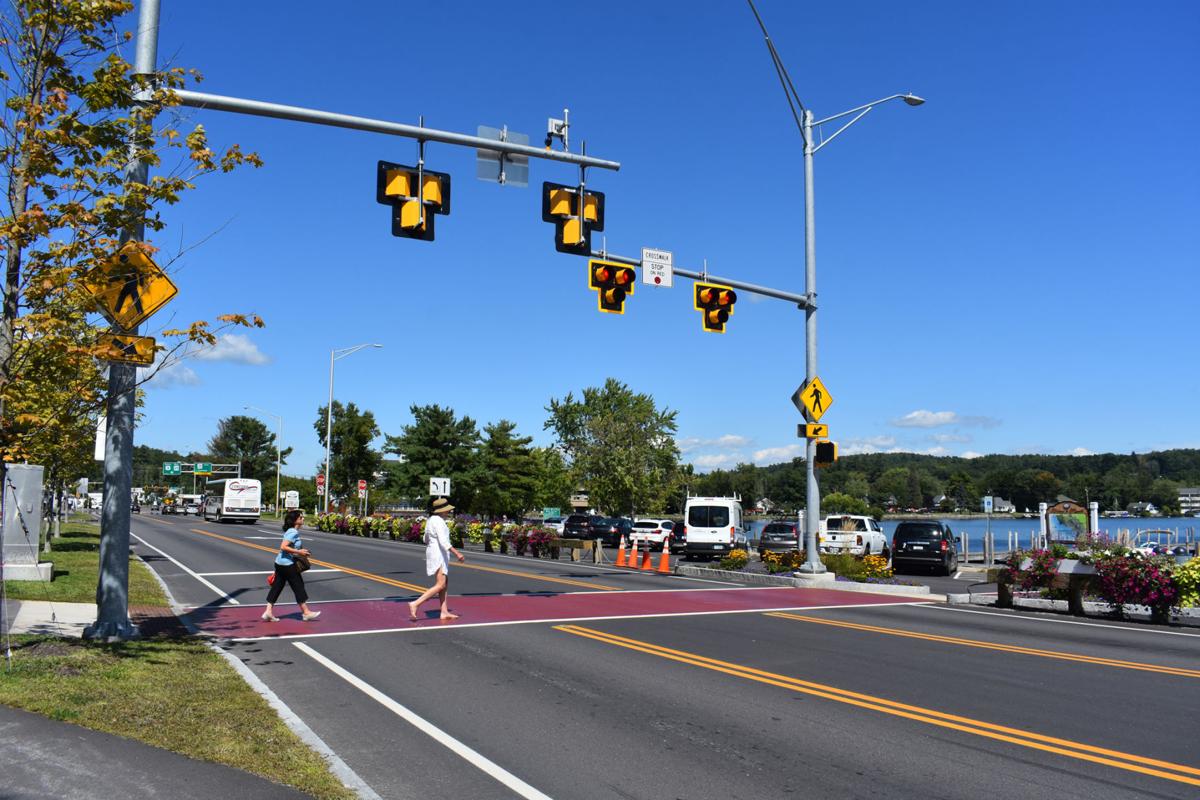 Pedestrians cross Route 3 in Meredith. The new signaled crosswalk is drawing criticism, as drivers and pedestrians seem confused by how to use it. (Adam Drapcho/The Laconia Daily Sun photo)

A car approaches a crosswalk, which went into operation earlier this year, near the town docks in Meredith. The signaled walk was intended to improve safety and traffic flow, however, many critics say it has made both worse. (Adam Drapcho/The Laconia Daily Sun photo)

Despite a sign instructing pedestrians to wait until the white "walk" symbol appears, many pedestrians cross against the signal if drivers stop before they're supposed to. (Adam Drapcho/The Laconia Daily Sun photo)

Pedestrians cross Route 3 in Meredith. The new signaled crosswalk is drawing criticism, as drivers and pedestrians seem confused by how to use it. (Adam Drapcho/The Laconia Daily Sun photo)

MEREDITH – You might not think the act of simply crossing the street is all that complicated, but some critics of a traffic light on Route 3 that's supposed to help pedestrians say it may do just the opposite.

The way it's supposed to work is this: A pedestrian who wants to cross Route 3 from the Main Street part of town over to the Town Docks stops at the crosswalk, presses the button to activate the lights, and waits. Drivers continue through the signal as the lights are blank; begin to slow when the yellow light flashes; then stop when the lights turn red. Seeing the white “walk” symbol appear, the pedestrian walks across. Some seconds later, the traffic lights turn from solid red to blinking red, telling drivers that they can proceed after stopping to ensure there aren’t any pedestrians, then the lights turn off completely, indicating traffic should resume without stopping.

The signaled pedestrian crosswalk is part of a broader state project to improve the intersection of routes 3 and 25. The new crosswalk began operating this spring, taking the place of two, unsignaled crosswalks that were in the area before.

“I think it’s stupid and dangerous, because it’s confusing and people cross no matter what the light says,” said Bob McDaniel, a Meredith resident who was buying a few items at a nearby convenience store on Thursday.

Jason Ahlquist, a New Hampton resident who often does work in Meredith and who was getting lunch at the convenience store, said he thinks the signals, coupled with ignorance of drivers as to how they should react, will lead to accidents.

“What’s happening is, the light is turning orange, and people are stopping. Someone might see that orange light and stop, and the person starts walking, but the other lane doesn’t see what’s going on,” Ahlquist said. “It’s not good. It’s a nightmare.”

Ray Mortiz, selectboard chair, said the town has heard “mostly polite criticism, I would say, of the crosswalk. The general terminology is that it’s causing more traffic delays than it’s solving.”

Moritz, reached by phone on Thursday afternoon, said he happened to have just returned from spending a half-hour observing the situation for himself. Of the four use cycles that he observed, two began as intended: the pedestrians pressed the button to call for a walk light and began to wait. But then drivers, seeing pedestrians, stopped to let them cross before the lights turned red, and the walkers crossed the road.

“Which was wrong on their part,” Moritz said. After the pedestrians crossed, of course, the red lights came on, directing traffic to stop and wait even though there were no longer any pedestrians to wait for.

In the other two uses he observed, pedestrians didn’t even bother pressing the button. They stopped at the crosswalk and crossed as soon as traffic stopped, as though there weren’t any signals there, and as though they had the right-of-way.

“Which, coincidentally, is not the case,” Moritz said.

Part of the confusion, no doubt, stems from the state law that requires drivers to stop for a pedestrian attempting to use a crosswalk. However, that’s only if the crosswalk is not signaled. If there is a crosswalk controlled by the signal, drivers and pedestrians must obey the signals.

If everyone knew how to use the light, it could provide a benefit to both traffic flow and pedestrian safety. At least, that’s what the state’s engineers told the town when they were presented with the plans. Mortiz said the light is designed according to federal guidelines.

In another circumstance, it might be reasonable to expect drivers and pedestrians to learn, over time, how to use the light. But after several months of operation, there doesn’t seem to be a trend toward compliance, which Moritz said is likely due to the fact that many drivers travel to, or through, Meredith just a handful of times each year.

“We do have a lot of transient traffic and a lot of tourist traffic, so I don’t think there’s much hope of training them or educating them, so to speak. I’m not optimistic,” Moritz said was his personal opinion.

He said he was going to ask Town Manager Phil Warren to ask the state if the light is synchronized to the lights at the Route 3/25 intersection – which the town was told it would be – and if so, where in the cycle it is synchronized to match, “and see if that’s really the appropriate synchronization,” he said.

He also wants to know if the light operation is following a federal regulation, or if it’s just a recommendation.

“I would ask them, if it’s not mandated, to look at the situation and to say, given the lack of the driver education opportunity, to go to a traditional green, yellow and red lighting scheme,” he said, referring to the well-understood signals of a conventional traffic light.

In the meantime, he said the town will station a police officer at the crosswalk for the busy Labor Day weekend. Pedestrians will still be asked to use the signals, while the officer, he said, “will be there to help enforce adherence, and to educate pedestrians as to what they should be doing.”

“You’re not supposed to go until you get the go-ahead, the white sign,” he said.