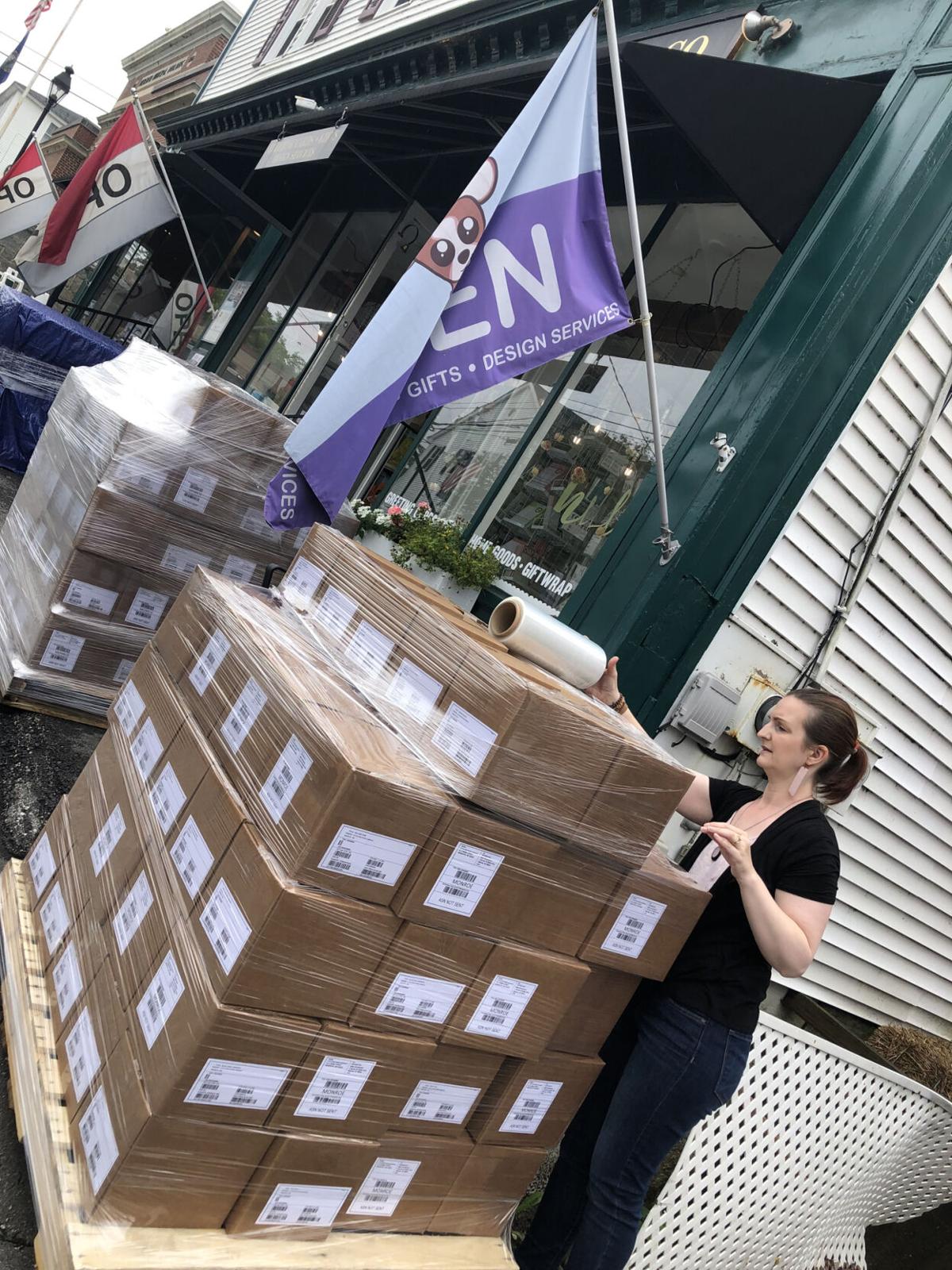 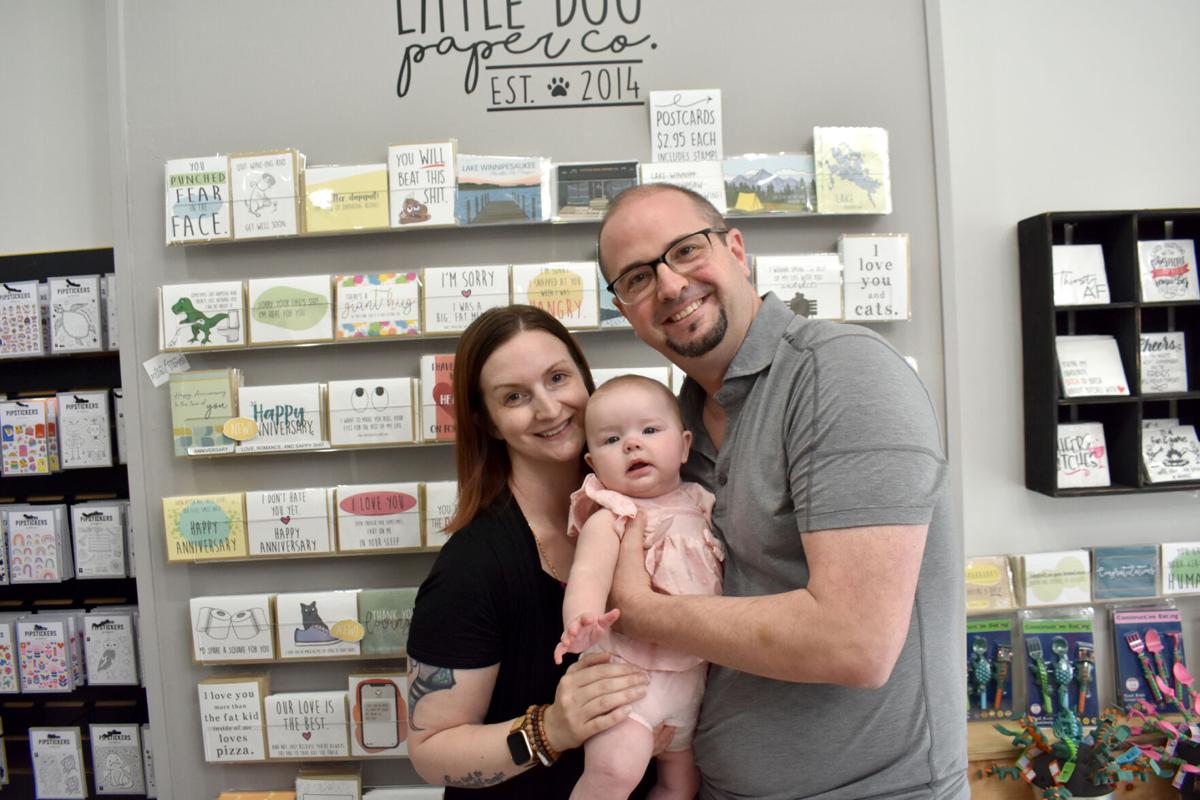 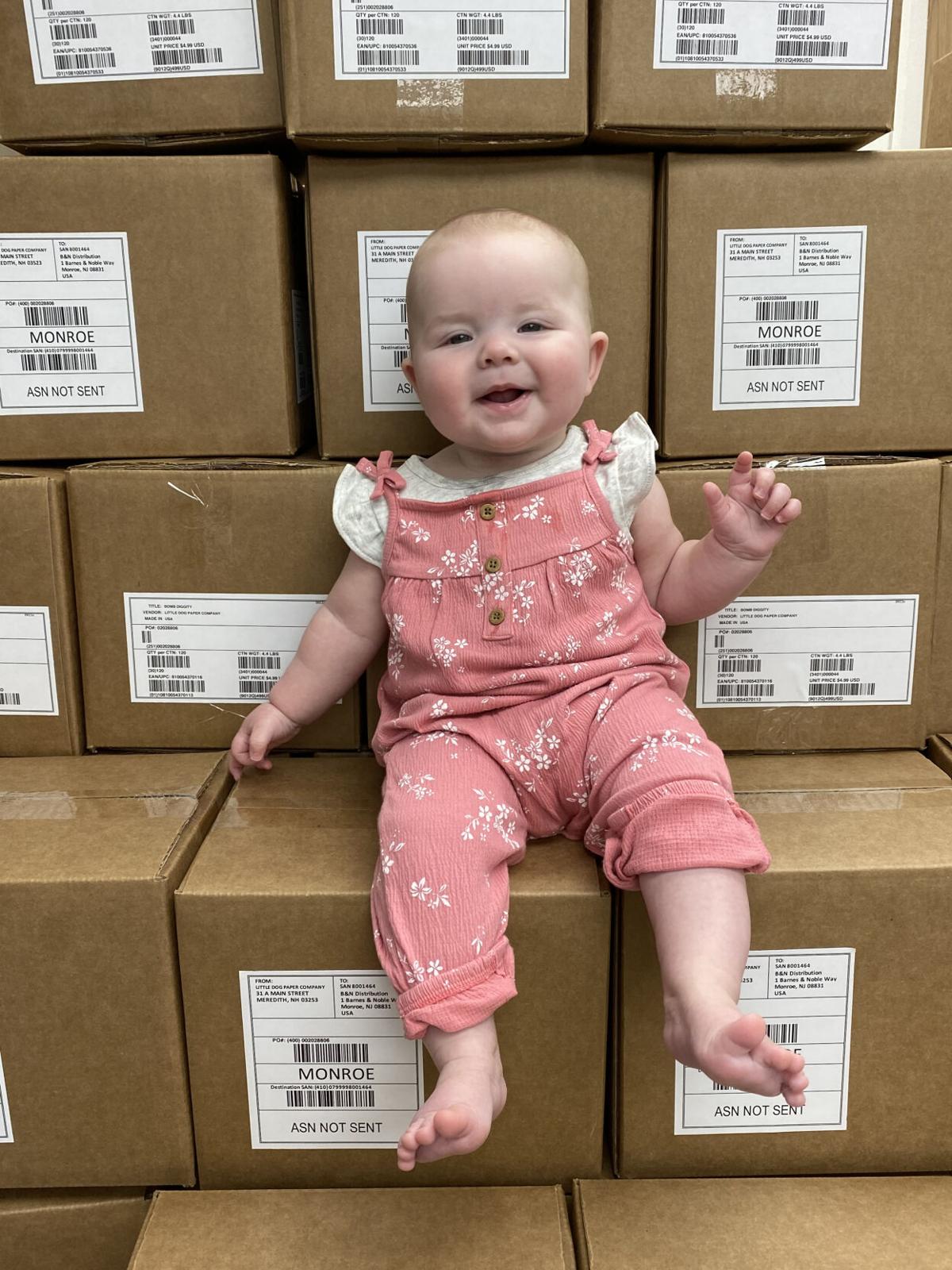 Charlotte Ayers, the littlest member of the Little Dog Paper Company team, sits on some of the boxes of greeting cards that will soon be stocked in 260 Barnes & Noble stores across the country. (Courtesy photo)

Charlotte Ayers, the littlest member of the Little Dog Paper Company team, sits on some of the boxes of greeting cards that will soon be stocked in 260 Barnes & Noble stores across the country. (Courtesy photo)

MEREDITH — The Little Dog Paper Company started in 2014, on the dining room table of Nicole Ayers, with $200 and a dream. It has grown since then, and 2021 is turning into a quantum leap for the mom-and-pop operation.

David Ayers, who runs the business along with his wife, Nicole, and her sister, Renee Ferland, said until the start of 2021, the business had sold 10,000 greeting cards out of its storefront on Main Street, which it has operated since 2018. Then they got their first order from book giant Barnes & Noble, for 29,640 cards, to be stocked in 260 of the retailer’s stores.

“This triples the amount of cards we’ve sold out of this store since we started,” David said. He said the deal came about through their relationship with Just Got 2 Have It!, a wholesale representation agency. Their contact there asked if Little Dog was ready for them to pitch their cards to Barnes & Noble last year, and David said sure, swing for the fences.

Over the winter, Little Dog sent one greeting card after another to the purchasing agents at B&N, which kept asking to see other designs they had.

“We thought they might pick six or seven. They picked 19,” said David.

The cards are a team effort between the husband-and-wife team. Usually, David thinks of the words for the cards, then Nicole creates the artwork. They specialize in cards that are funny, a little cheeky, and sometimes a little naughty. Ferland is the director of operations.

Ayers said he was pleased Barnes & Noble picked their “U R My Hero” card, with the words spelled out by a stethoscope, which they designed during the pandemic as a tip of the cap to health care workers. They also picked a birthday card that says, “I will always be younger than you,” and he was kind of surprised that they toed the naughty line by picking a card that says, “Bon Anniversaire – that’s ‘Happy Birthday’ in French cuz I’m fancy AF.’”

This isn’t the first wholesale deal for Little Dog, since they sell to gift shops across the country. It is, by a considerable margin, though, their biggest order. They packaged three palettes worth of cards, with one going to B&N’s West Coast hub and the other two going to their East Coast distribution center. They don’t yet know which of the corporation’s stores will stock their cards.

Nicole said it was “pretty cool” to see her cards stocked in other stores, such as at Macro Polo in Portsmouth.

She said it’s “pretty surreal” to think of her work on the shelves in such a major retailer.

“I hope we will be able to drive to see one, so we can take a picture of it,” Nicole said.

David said the company’s sales have expanded every year since they opened, even to include 2020. Greeting cards saw a boost during the pandemic, likely since face-to-face visits were curtailed for so long.

“Last year, we finished 7% under our projection, and we made the projection before COVID hit,” David said.

They recently expanded their store, more than doubling the square footage of their retail space. They stock their own designs as well as gifts and items from other companies that match their wry and sassy outlook. That extra space came in handy when they had to figure out how to package an order of nearly 30,000 cards. They pulled in friends and family to help them match cards to envelopes, then stuff them into cellophane sleeves. They finally packed the order onto palettes they positioned onto the sidewalk in front of their store so they could be picked up by a delivery truck. That won’t work in the winter, David said.

“We’re going to need to get a warehouse,” Nicole mused.

David attributed their success to a fearless outlook. Aim for the moon and figure out how to land along the way.

“I would say, for me, personally, it’s being not afraid to fail. I don’t think you grow properly if you don’t fail a little bit,” David said. “We’ve had bumps and bruises with every growth spurt we’ve had. Between the three of us, we’ve been able to push through.”