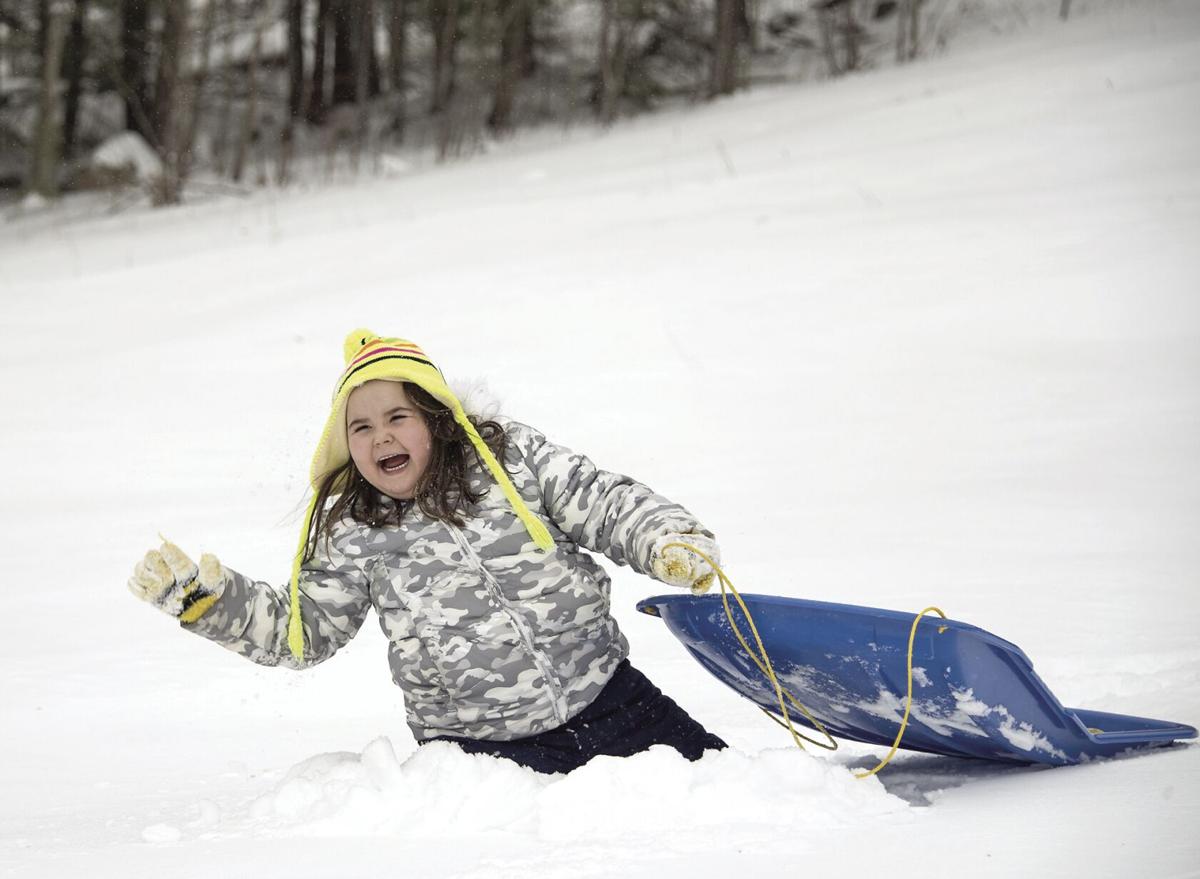 Scarlet spent her “Snow Day” playing in the snow at the sliding hill at Memorial Park in Laconia, which was a popular place for kids to enjoy a day off from school on Tuesday. (Karen Bobotas photo/for The Laconia Daily Sun) 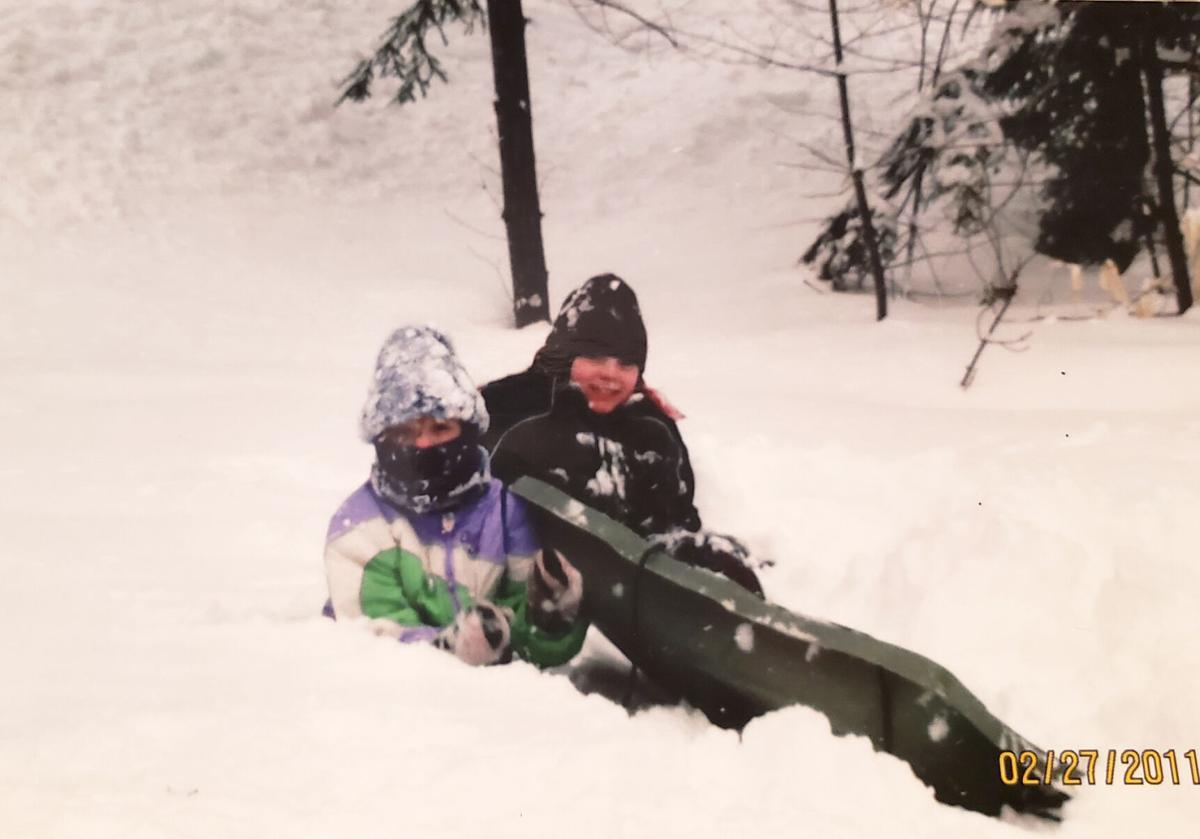 Lauren and Adam Sikoski go sledding in their Gilford front yard during a snow day a decade ago. Though the technology exists to end the practice of canceling school because of snow, many argue that it's a tradition worth keeping. (Courtesy photo)

Scarlet spent her “Snow Day” playing in the snow at the sliding hill at Memorial Park in Laconia, which was a popular place for kids to enjoy a day off from school on Tuesday. (Karen Bobotas photo/for The Laconia Daily Sun)

Lauren and Adam Sikoski go sledding in their Gilford front yard during a snow day a decade ago. Though the technology exists to end the practice of canceling school because of snow, many argue that it's a tradition worth keeping. (Courtesy photo)

GILFORD — It’s been a tradition of childhood for decades. First comes the forecast and, with it, anticipation. The flakes start drifting in, often before bedtime. In the morning, the would-be students run to the window to see how much snow has accumulated, then to the internet – their parents had to wait by the television or radio – for the news. No school today; a snow day.

“That was always something you looked forward to,” said Lauren Sikoski. She was speaking from her Gilford home on Tuesday, a day she would normally be in school had it not been for a winter storm that blew through the Northeast the night before. Sikoski is a senior at Gilford High School, meaning that Tuesday might be her last snow day. Could the end of snow days be near, not just for Sikoski, but for all students?

The age of remote school

By this point in the school year, students, parents and teachers alike have taken a crash course in remote learning and instruction, an educational adaptation to the coronavirus pandemic. Those same adaptations also mean that schools could flex to virtual education on days when inclement weather, not concerns over a virus, keep students from in-person instruction.

There might be good reason to consider that possibility. Lorretta Sikoski, Lauren’s mom, said her experience as a parent has complicated her feelings about snow days.

“It’s kind of a mixed feeling,” Lorretta said. “I remember as a kid and being thrilled to death about snow days.” She grew up in Laconia and – especially once her friends were old enough to drive – snow days meant piling into whatever friend’s car could be shoveled out and spending the day skiing at Gunstock.

An unscheduled day off from school looks different as an adult, she said.

“As a parent, I appreciate the concept and appreciate how excited my kids are about it. I also understand that parents don’t have snow days,” said Lorretta, who works part-time as a nurse and is studying to become a nurse practitioner. “Snow days are a challenge (for parents)... A lot of parents have to work.”

Laconia School District will call up to two snow days this year, according to Superintendent Steve Tucker. Those two days will give teachers a chance to engage in professional development, he said, and give students a chance to step aside from expectations for a day.

“I absolutely understand that families and kids enjoy having a snow day,” Tucker said. This year is an outlier on many fronts, but with Laconia being in a “hybrid” schedule for much of the year, with students only attending school part of the time, he said children appreciate being in school more than they would any other year.

But, he said, calling for remote instruction instead of a snow day wouldn’t be a popular choice.

“I understand that having a snow day, a day off, is something that kids appreciate and enjoy.”

Superintendents don’t get much sleep when there’s a snowstorm brewing, Tucker said. They are usually up by 3 a.m. to listen to a conference call including state officials who discuss the immediate forecast and the affect on roadways. Then they talk with municipal department heads and the bus company about the state of local travel and safety. They then look at what other districts are doing, and try to make the call by 5 a.m.

“It’s a tough one,” Tucker said. “The storm that we had on Dec. 17, that yielded 39 inches, the night before they were predicting 6 to 12 inches.” He also said he appreciates the disruption that a school cancellation causes.

“I realize that as soon as that call goes out, the lives of over 400 staff members and more than 2,000 students get changed,” Tucker said.

There’s room to breathe in the space that disruption creates. Inter-Lakes School District, which serves the towns of Meredith, Center Harbor and Sandwich, has announced that it would call as many as five snow days this year. Mary Moriarty, superintendent, said that decision came about as a collaborative effort between teachers, the school board and administration, who agreed that it was better to preserve the in-person days rather than try and replace them with virtual days, of which there will certainly be enough already this year.

Inter-Lakes is pursuing in-person, full-time instruction this year, though periods of virtual learning have occurred in the wake of positive COVID-19 cases that could have resulted in exposures within the school buildings.

The challenges of pursuing an education this year makes a snow day all the more meaningful, Moriarty said.

“I do think, certainly, the ongoing stress on everybody, children and adults, though a pandemic, having something that feels a little lighter is a good thing,” she said.

Just because there’s no school doesn’t mean there’s no education, she said.

“Learning happens all the time – in school and outside of school. Snow days present those opportunities to explore and challenge yourself… Kids need time to have a chance to explore without the confines of the daily schedule,” said Moriarty, adding, “And I hope they take some time to do a little reading.”

In Gilford, Lauren Sikoski said she planned to spend the day curled up on the couch with her mom, watching 80s classic movies. They are particularly fond of “Dirty Dancing” and “9 to 5.” Lorretta interjected that Lauren would be expected to do some chores, too.

Next year, Lauren will likely be off to college.

Alison Buchholz, a professor of education at Plymouth State University, said that a day watching Dolly Parton and Patrick Swayze has its own value. There’s positive bonding between daughter and mother, as well as a lesson in self-care.

“I really think that kids need snow days. Not just because we’re in the middle of a pandemic, but there are a lot of pressures that we put on kids these days, any break that they get will be appreciated,” Buchholz said.

There’s a tendency to think of snow days as lost time, from an educator’s perspective, but Buchholz said that needn’t be so. Teachers can encourage their students to engage in activities that support healthy bodies and healthy minds, such as outdoor play or meditation, or social engagement by offering to help a neighbor shovel their driveway. Those are bullet points in curricula that often get lost in regular lesson planning. When the class gathers again, the teacher can invite students to discuss what they did with their day, and how it might have helped them grow as a person.

“I feel like there’s so much good and positive aspects that come on a snow day. They’re not wasted days – they could be, but who defines what’s wasted?” Buchholz added, “As a mom of a 13-year-old boy, who feels like he’s slipping away (into adulthood), a day on the couch couldn’t sound much better.”

Parents should see snow days as opportunities to live life slowly with their child, Buchholz said. “Spend the time together baking cookies, doing a puzzle,” make a playlist of mutually liked music and have a dance party, “any of the kinds of things nobody has time for anymore because we’re all overscheduled.”

Early studies have found that remote education has served to widen the gap between high-achieving students and those who require close support in the classroom to keep up. There is often a corresponding difference in socioeconomics between those two groups of students. Replacing snow days with yet more virtual learning would only “disadvantage disadvantaged children more,” Buchholz said.

For Lorretta Sikoski, hanging on to the snow day tradition is a chance to hold on to something joyful at a time when people have been asked to let go of so much. So, even though it can be a challenge for parents, she hopes the tradition will continue.

“I watched so much of our life changing, so many traditions, so much fun, so much that’s cool, taken from us,” Lorretta said. “The tradition of a snow day, I think it’s cool.”

LACONIA — Trash collection in the city will be delayed one day because of the predicted snowstorm, the city announced Monday morning.