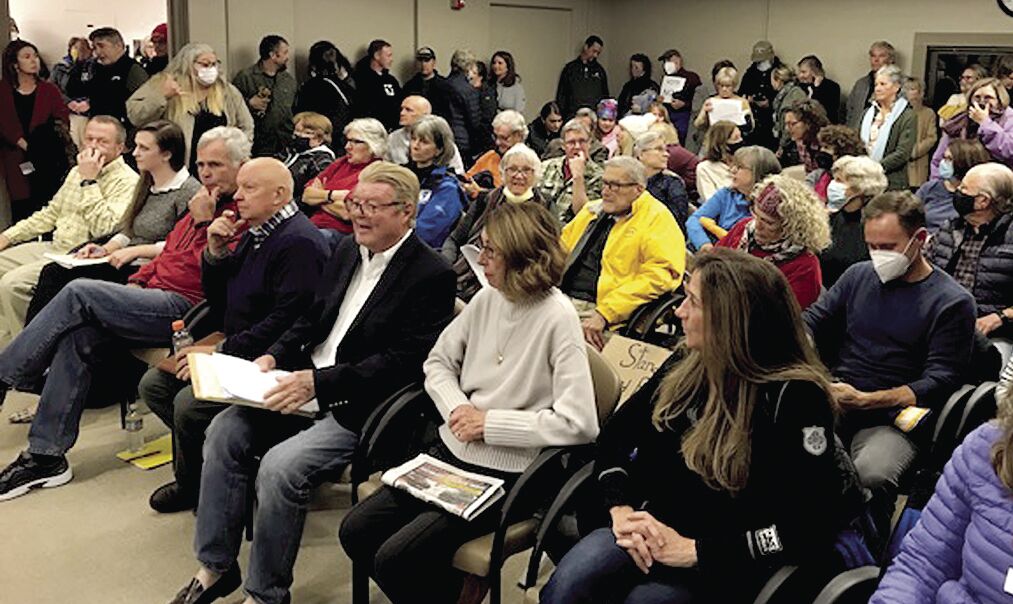 Gunstock Commission members, from third left, Brian Gallagher, Gary Kiedaisch, and Rusty McLear, wait for the Belknap County Delegation meeting to start Tuesday evening. The lawmakers voted to hire an attorney to represent the delegation in a lawsuit brought by the three commissioners who the delegation is considering removing. (Michael Mortensen/The Laconia Daily Sun photo) 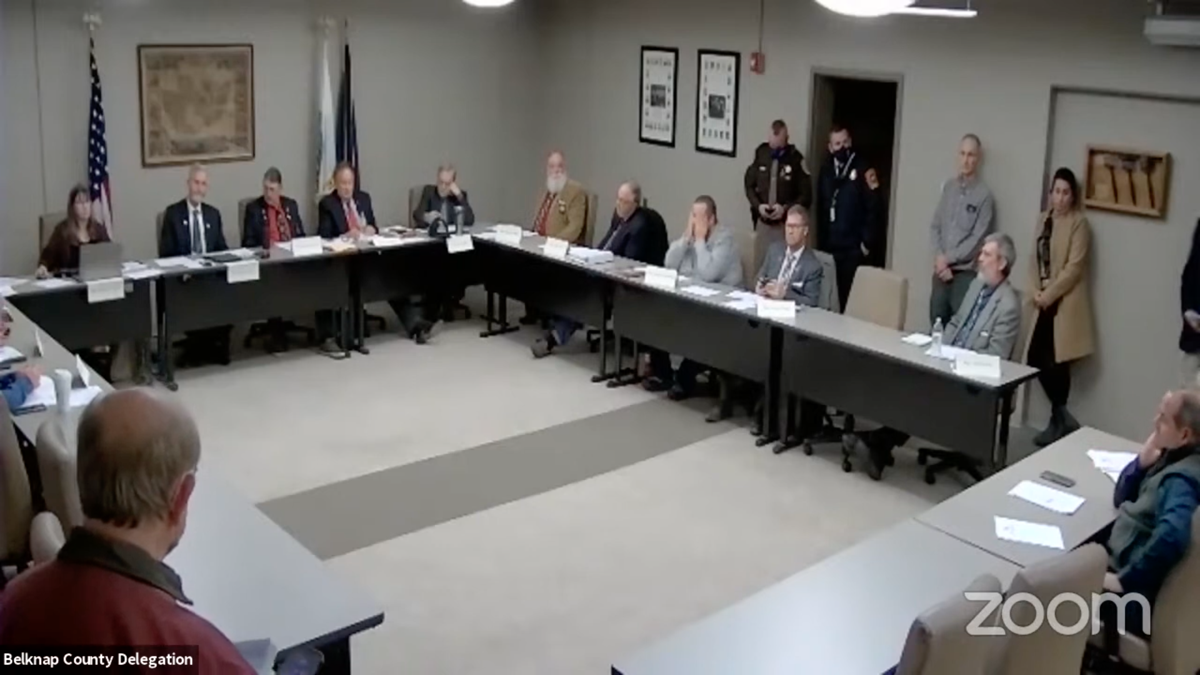 Belknap County Sheriff William Wright, left, and Laconia Fire Chief Kirk Beattie stand in a doorway behind the seated members of the Belknap County Delegation Tuesday. Beattie was called in when an estimated 130 spectators turned out for the meeting, stretching the capacity of the room.

Gunstock Commission members, from third left, Brian Gallagher, Gary Kiedaisch, and Rusty McLear, wait for the Belknap County Delegation meeting to start Tuesday evening. The lawmakers voted to hire an attorney to represent the delegation in a lawsuit brought by the three commissioners who the delegation is considering removing. (Michael Mortensen/The Laconia Daily Sun photo)

Belknap County Sheriff William Wright, left, and Laconia Fire Chief Kirk Beattie stand in a doorway behind the seated members of the Belknap County Delegation Tuesday. Beattie was called in when an estimated 130 spectators turned out for the meeting, stretching the capacity of the room.

LACONIA — Facing a record crowd of more than 100 Gunstock supporters, the Belknap County Delegation voted to hire an attorney to represent the lawmakers in a suit attempting to block the delegation from removing three Gunstock Area Commissioners.

The vote of 11-5 came toward the end of a 25-minute meeting Tuesday evening during which there was little discussion among delegation members, and no opportunity for members of the public to speak.

The turnout was the largest for a county meeting in recent memory, according to County Administrator Debra Shackett who has attended virtually every meeting in the past 13½ years. Laconia Fire Chief Kirk Beattie was called in to determine whether the size of the crowd posed a safety hazard. The assembly permit issued by the Fire Department states the maximum occupancy of the room is 119 people.

Almost half of the meeting was taken up by delegation chair, state Rep. Mike Sylvia, reading a prepared statement in which he pushed back on criticism that the delegation was undermining the stability of the recreation facility and argued that critics have been manipulated, and are uninformed about Gunstock commissioners' development plans, or the reasons behind the delegation’s decision to intervene in the matter.

“I know of no one who wants to harm Gunstock. My only agenda is open and transparent operation of a county asset,” he said.

“A lot of people have been chiming in with their opinion on Gunstock,” Sylvia said. “Having attended the Gunstock meetings recently I have to ask, ‘Where have you been?’”

Sylvia charged that the master plan for expanding the facility has been taking place in secret with no recorded minutes of those discussions and no opportunity for the public to comment on the details of the plan.

“It might be useful to ask (the commissioners) when they voted on the plan and when the public was allowed to comment on the plan,” he said.

Commission Chairman Brian Gallagher said after the meeting that Sylvia misrepresented the facts of the master plan process, which is still ongoing. He said the commission has not taken a vote on the plan and will not be doing so until sometime after a public meeting scheduled for Saturday, Dec. 4.

“The plan is not complete. We are still in the data collection stage,” he said.

Sylvia said the delegation’s decision to get directly involved in the matter was prompted by the Gunstock commissioners' request that it remove Commissioner Peter Ness for violating Gunstock’s ethics policy.

Sylvia characterized the allegations made about Ness as “defamatory and baseless.” He went on to charge that the Gunstock Commission’s attorney had exceeded his authority when he prepared a report detailing Ness’s alleged repeated attempts to sell Gunstock a ski instruction software program in which he has a vested interest, and for his practice of berating some Gunstock employees and publicly scolding them about their job performance.

“The lack of verifiable facts (about Ness) might be considered harmful and reckless against a public official and should be referred to the attorney general,” Sylvia said.

Using guarded language, Sylvia suggested that the Gunstock Commissioners had probably broken the law in a number of ways.

He specifically mentioned misuse of funds, improper influence, criminal defamation, obstructing government administration, official oppression and conspiracy as being among “criminal elements that are at issue.”

He called their decision to have the commission’s attorney sue the delegation to stop them from removing Gallagher, and Commissioners Gary Kiedaisch, and Rusty McLear improper, saying it amounted to using Gunstock funds “for their own personal protection.” That, Sylvia continued, “might be considered just cause for removal.” He pointed out that Ness and the other Gunstock commissioner, Jade Wood, had voted against taking legal action against the delegation.

In the vote to hire an attorney, the delegation authorized the spending of up to $20,000 in attorney’s fees.

State Reps. Tim Lang and Mike Bordes objected, saying the expenditure was an undue burden on taxpayers. But Sylvia said the delegation needed to have legal representation to defend itself in the lawsuit.

In addition to Lang and Bordes, those voting against hiring the attorney were state Reps. Juliet Harvey-Bolia, Travis O’Hara, and Douglas Trottier.

Initially the delegation was expected to consider the removal of Gallagher, Kiedaisch, and McLear on Tuesday, but that plan was dropped Monday, and instead voting only on the retention of legal counsel.

Gallagher denied Sylvia’s allegation that the commission violated the Right to Know Law in the way it hired attorney Thomas Quarles Jr. which, he said, occurred in a vote taken on July 29.

Bruce Wallsten, who stood along the side wall of the County Complex conference room waiting for the meeting with his wife Denise, described himself as a third-generation Gunstock skier. Denise said they had come “to keep our eyes on what is happening at Gunstock. Privatization is not the way to go,” she said, a reference to the proposal by some delegation members that Gunstock should be leased out to a private developer.

Local businesswomen Penny Pitou, an Olympic skier who ran the ski school at Gunstock during the 1960s, said she was disappointed at the way the meeting was handled, with no opportunity for public comment.

“No one can say anything. This is crazy,” she said.

Moments after the meeting adjourned, McLear stood up from his seat in the front row where and the Gallagher and Kiedaisch had been sitting, and told the delegation, “This was a travesty.”

“What’s most discouraging is the continuing behavior of Representative Sylvia to not allow the public to speak,” he said.

Belknap County Commission Chair Peter Spanos noted that this was the second time the delegation had voted to hire an attorney in recent months.

“It’s more of the taxpayers’ money being tied up. What’s the end game,” he said.

While the delegation authorized the hiring an attorney, the actual payment of legal expenses must be approved by the county commissioners.

“I wouldn’t support the payment,” Spanos said, “and I don’t think the other commissioners would either.”

A court hearing has been scheduled for Dec. 23, at which time the Gunstock Commissioners are expected to ask a judge to issue an injunction prohibiting them from removing Gallagher, Kiedaisch, and McLear.

Belknap county residents by themselves cannot financially support Gunstock. If the Area were to be sold the world would not come to an end. What would change? No more skiing, the campgrounds will cease to exist. The price o skiing would go up...welcome to the new world. How many residents are there in Belknap County vs how many actually use the mountain? Remember if it weren't for "the flatlanders" there would be nothing at Gunstock.

What would change: a private operator would suck every penny of profit the could out of Gunstock, doing as little maintenance or less as possible on the lifts and facilities to a point where it is in such a shambles that the operator having extracted every penny of profits out, will walk. The county will be left with a a choice of significant taxpayer expenditure to rehabilitate or more likely abandon Gunstock.