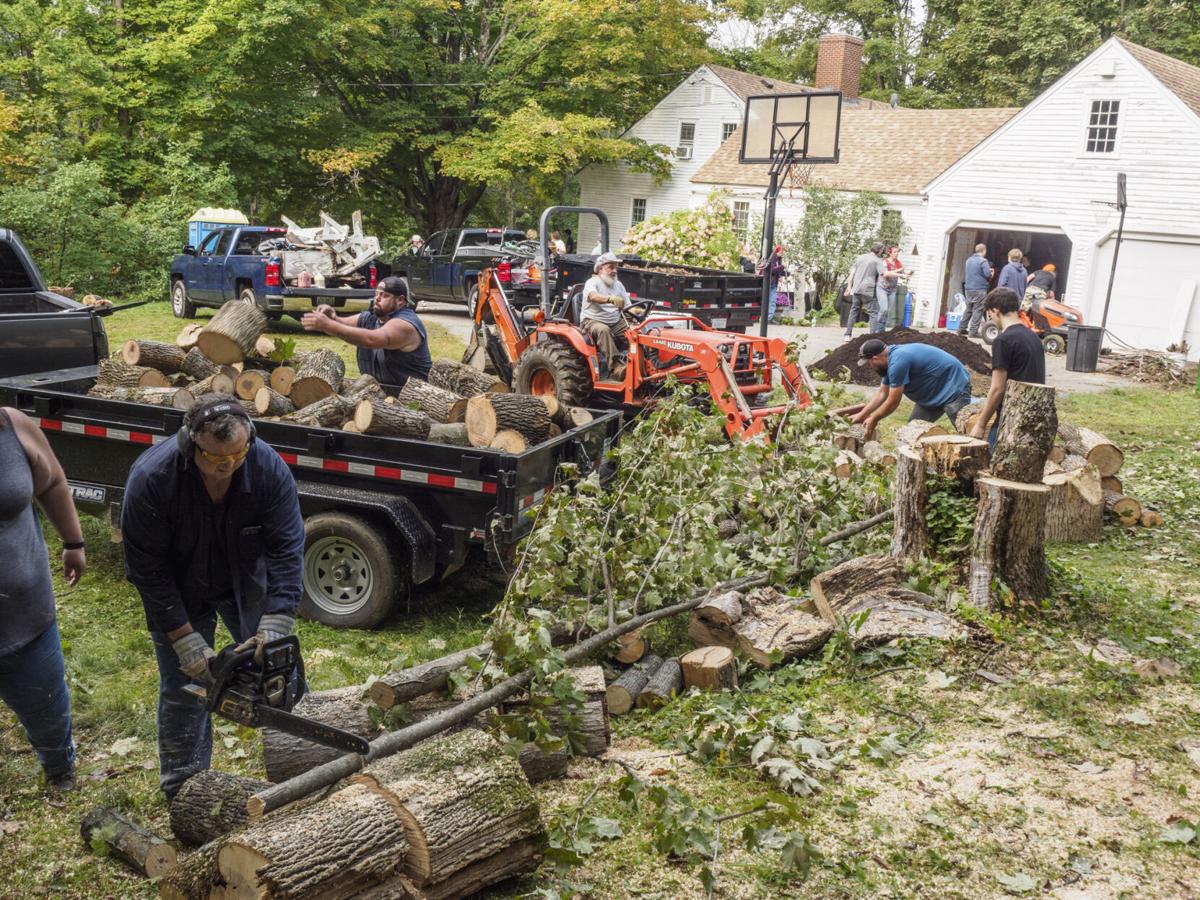 A large group of volunteers work at the Kutuk homestead in Gilmanton on Sunday September 12, 2021.(Alan MacRae photo/for the Laconia Daily Sun) 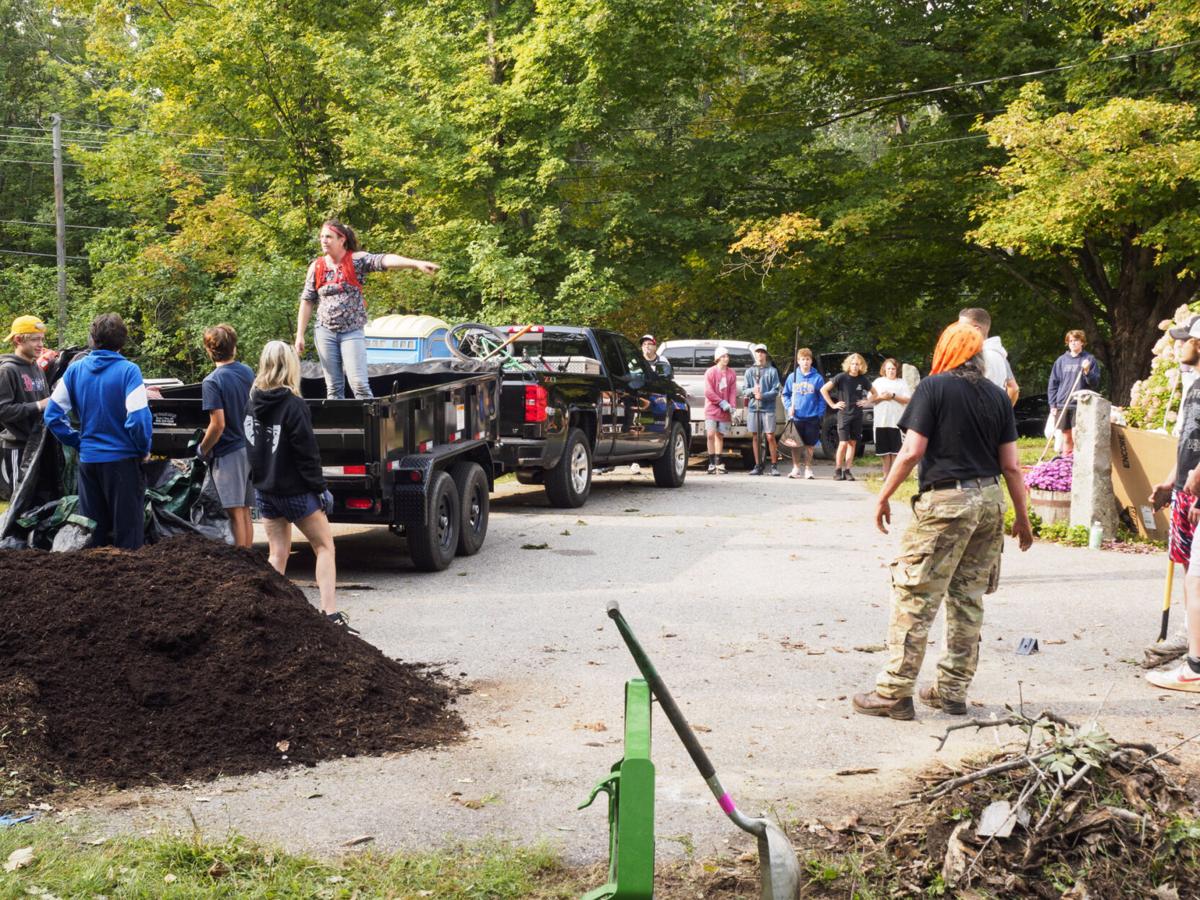 A large group of volunteers work at the Kutuk homestead in Gilmanton on Sunday September 12, 2021.(Alan MacRae photo/for the Laconia Daily Sun)

GILMANTON — Helping a neighbor in need is a Yankee tradition, especially in small towns in rural New Hampshire. For an army of caring residents of Gilmanton, it was impossible to ignore the tragedy and grief of Fawn Kutuk, a neighbor and mother immersed in unspeakable loss for the second time around.

Three years ago, she lost her husband, Baha, who died suddenly at age 37 from a degenerative heart disease while chain sawing a tree in their yard. Just over two weeks ago, their son, Aydin, 16, collapsed while playing tag at a friend’s birthday party. CPR, electroshock and medication could not revive him on the scene or after an ambulance brought him to Concord Hospital – Laconia. He was pronounced dead from a sudden cardiac event.

“My daughter and I just collapsed on the ground,” said Fawn.

Since then, the support that has welled up to help her and her daughter, Hale, organized by a friend of Aydin’s, is testament to the magic that happens when a community’s heart strings are pulled taut – but remain strong enough to reel in a myriad of volunteers.

“I’m overwhelmed with the feeling of support, a love for my community,” said Fawn. “It feels like a warm embrace in the wake of every parent’s worst nightmare.”

The campaign to help the Kutuk family originated through the efforts of Chance Bolduc, who told his mother Daneille Bolduc, the principal at Gilford Elementary School, that he wanted to do something to help Aydin’s mom.  Bolduc started a Go Fund Me page which raised over $15,000 in the space of a day. The money was designed to pay the Kutuks’ funeral expenses. Now it will also fund a celebration of life.

This is not the family’s first experience with a groundswell of support from the Gilmanton community. When Baha died in 2018, she and the kids took his body to Turkey to be laid to rest in his native city, Istanbul, where he lived before emigrating to the U.S. in his 20s. Fawn, who had studied Turkish in college, met Baha through a chat room for speakers and learners of Turkish. The family had moved here from Ossipee in 2015.

“It was a huge reminder” that Baha was gone whenever she and the children pulled into the driveway and saw the tree where he died. When the family returned from his burial in Turkey, they found that tree cut up and removed and their grass was trimmed. “They had a meal train that was delivering food to us, and people stopping by with condolence, Fawn said. “That was our first taste of what Gilmanton is about.  Gilmanton was the inspiration for Peyton Place. Politically and religiously, things can get tough here. But in the heart of this community, we are family. This is such a testament to that.”

After Baha died, Fawn had the children examined by a cardiac specialist at CHAD in Dover, where they were given a clean bill of health. The suspicion now is that Aydin died of a similar syndrome known as Long QT, which can be genetic, a condition that refers to elongated intervals between heart beats, which weakens the heart muscle until it no longer pumps. Three years ago, there was no medical test to detect Long QT. Inside its sufferers, it essentially behaves like a ticking bomb, ready to go off anywhere at any time.

“Never in my wildest dream did I ever think I’d lose my son early to something like this,” said Fawn. Aydin was a junior at Gilford High School, a three-season athlete who participated in musical theater and had a close group of friends who remained tight since meeting in middle school.

“Aydin was part of a really close friend group,” said Chance Bolduc of Gilmanton, a junior at Gilford High who knew Aydin from soccer and classes. “He was really outgoing and always doing sports. It was really easy to talk to him. We played video games and hung out a lot.”

Bolduc started the Go Fund Me page as one way he thought he could help the family. “Once I heard the information, I wanted to figure out a way to take as much stress off the family as possible,” he said. “I didn’t fell like it was real. He was just so young.”

“Being around (Aydin), he always had great energy, and we always had a good time when he was with us,” said Ellis Smith, 16, of Gilmanton, who met Aydin in fifth grade when they were 12. “Aydin’s laugh was always something that got others to laugh with him. It was so boisterous.”

Brenda Leary of Gilmanton, owner of Brenda’s Home and Garden, whose son, Michael Kitto, was Aydin’s friend, donated her time and energy to organize a volunteer army, collect donations, and work on landscaping the Kutuks’ yard. “My son said, ‘Can we help her? Can we do something? Can we create a memorial garden at her house?  I texted (Fawn) and said, “I’m so sorry for your loss. The boys want to help. I’m a gardener and I want to help.” The plan is to create a shade garden of hostas, annuals and perennials where friends of Aydin can leave trinkets, mementos and messages, and come to feel close to the companion they lost.

Now, the effort has blossomed into so much more, Leary said.

“It’s so overwhelming. We get updates. So and so donated plowing services for the winter, or a new floodlight for the driveway,” said Fawn. Volunteers organized a meal train to bring home-cooked food. “It’s a new wave of tears when more people show up and show how loved and supported we are in this community. I never knew what a gem it was until this tragedy, and how, at the end of the day, we all take care of each other.”

Fawn confessed she had always considered herself handy, but their old house became an insurmountable task after her husband passed away in his prime. “Whether I can do something or not, I’ll roll up my sleeves and try. In three years, these projects have gotten ahead of me. My largest stress was not my two teenage kids, it was my house and all the work that needed to be done that I couldn’t afford or do myself. It’s absolutely incredible. It’s all good things. It’s overwhelming,” she said.

A celebration of life for Aydin Kutuk, which is open to the public, will be held at Crystal Lake Park in Gilmanton on Sunday, Sept. 19 at 1 p.m.