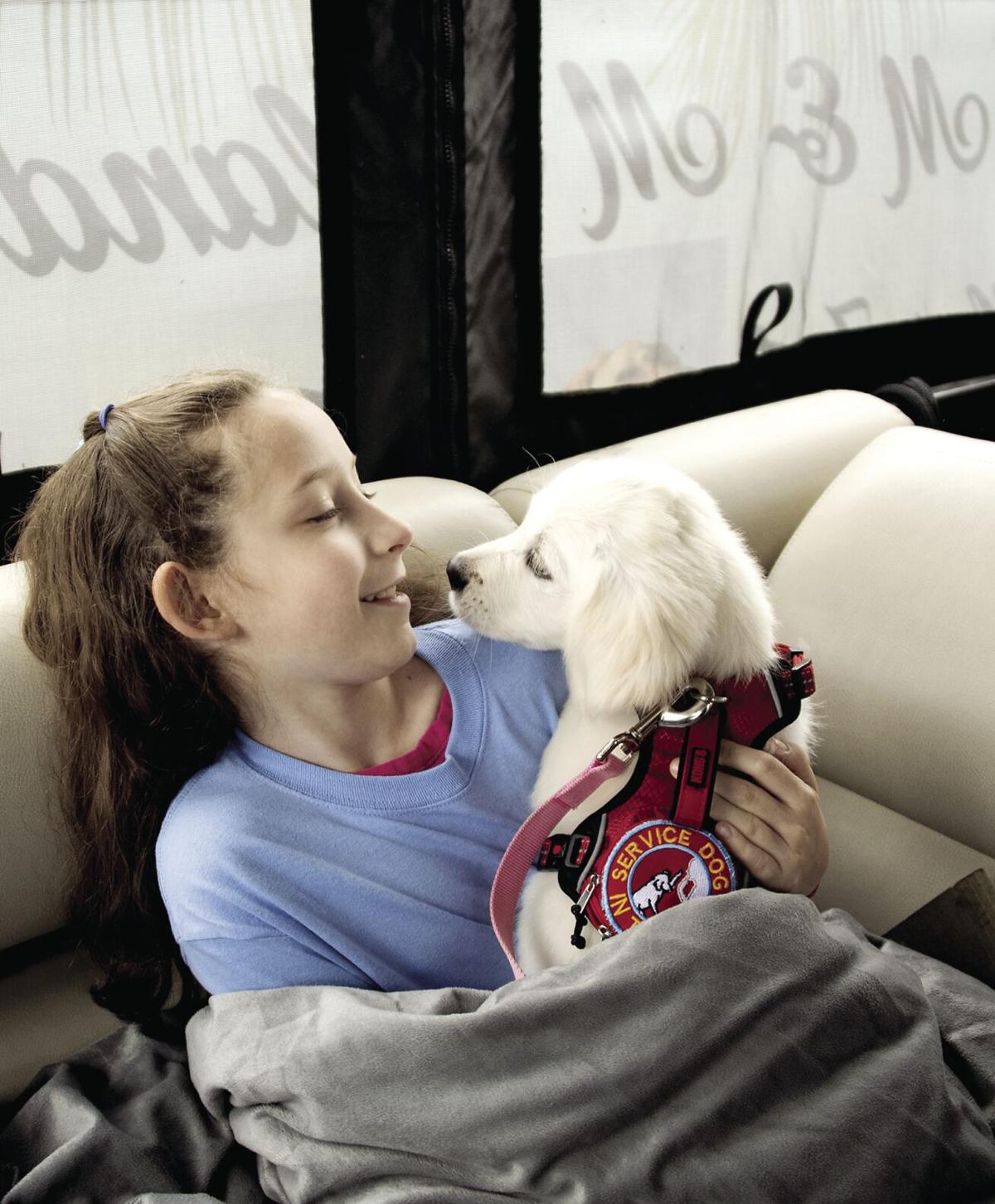 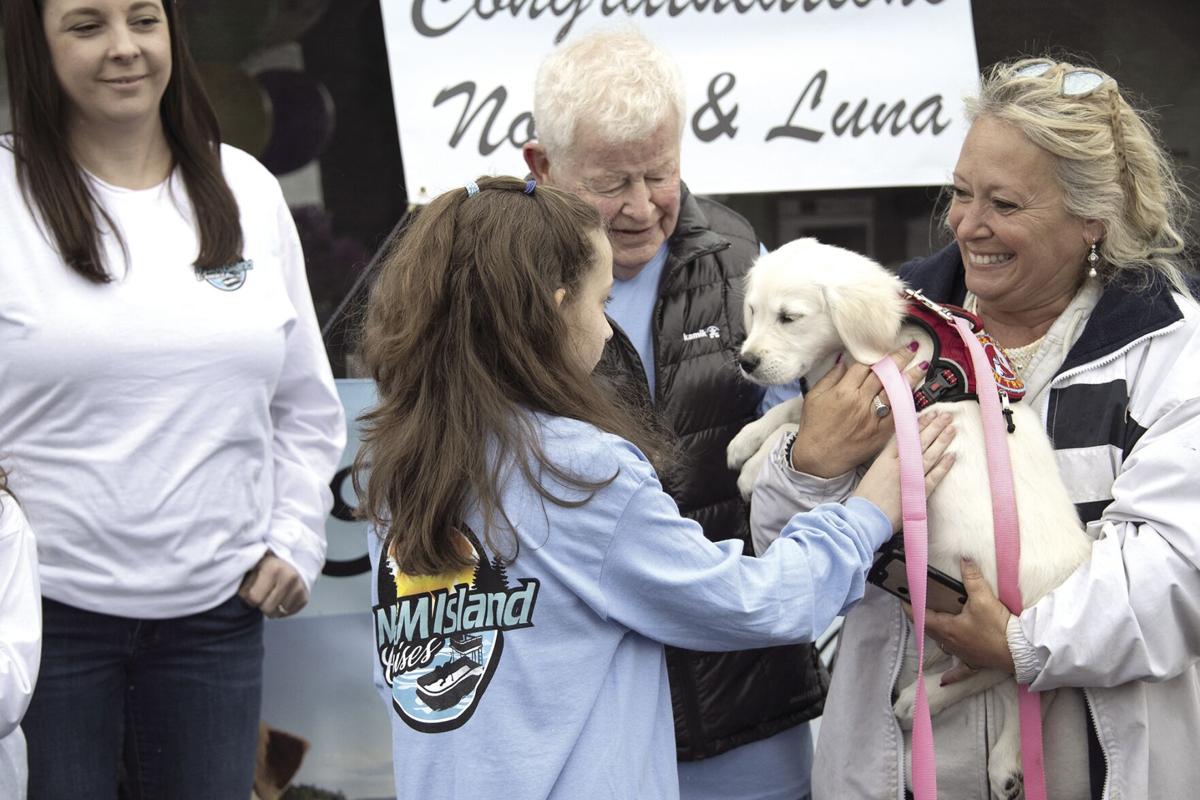 Amanda Boissonault, left, looks on as her daughter Norah receives “Luna” a diabetic alert service dog from Kevin Morris, center, in memory of his daughter Mandy on May 29. At right is Kaarla Weston from Gilford Golden Guardians. (Karen Bobotas photo/for The Laconia Daily Sun)

Amanda Boissonault, left, looks on as her daughter Norah receives “Luna” a diabetic alert service dog from Kevin Morris, center, in memory of his daughter Mandy on May 29. At right is Kaarla Weston from Gilford Golden Guardians. (Karen Bobotas photo/for The Laconia Daily Sun)

MEREDITH — Dealing with his daughter’s diabetes was a challenge for his family, said Kevin Morris. Mandy wouldn’t realize that her blood sugar was dropping, and once it got to 70 milligrams per deciliter, she couldn’t get it to recover without a trip to the emergency room.

“We would have four, five or six rides to the hospital (each year),” Morris said. “When we got Mylo, it all stopped. Not only did she have a companion, he alerted her before she even knew she was in trouble.”

“Mylo” was a dog, specially trained to alert Mandy that her blood sugar was falling. He did so by using his sense of smell, and was trained to signal once her blood sugar reached 79. Morris said the dog’s accuracy was uncanny. “It was crazy,” he said.

Mandy died on Feb. 22, 2019, from complications from diabetes. But before she passed, she was able to enjoy a period of independence and stability, thanks to the help that Mylo provided. Kelly McAllister, Mandy’s sister, said that she was happiest spending time with her family on Lake Winnipesaukee.

It’s fitting, then, that Mandy’s family created a boat tour company in her honor. M&M Island Cruises, named after Mylo and Mandy, takes people out for rides on a double-decker pontoon boat to explore the lake that Mandy loved. More than that, though, a portion of the company’s profits are used to help provide the same kind of assistance to others that Mandy and her family found in Mylo.

On Memorial Day weekend, M&M Island Cruises formally presented a golden retriever to a girl who is about the same age Mandy was when she was diagnosed with Type 1 diabetes. Morris said it’s his hope that the dog will not only improve the quality of the dog recipient’s life, but also extend it, as the dog’s abilities are expected to avoid much of the damage that occurs when blood sugar isn’t successfully regulated.

“If Mandy had a dog at age 8, there’s a chance that she would still be here,” said Morris.

He originally thought it would take a few years for the business to generate enough for a dog, since the total cost can approach $30,000 – most of which is training. But the proceeds from the tour company were augmented by a crowdfunding campaign, which meant that M&M Island Cruises was able to deliver its first dog after its first year of operation.

That first dog went to Norah Boissonnault of Strafford. Her father, Aaron, said she was diagnosed with Type 1 diabetes when she was 4 years old. She is now 8 and a second grader. “She is into computers, loves playing Roblox, specifically, really into chatting with her friends online, very much into technology,” Aaron said.

Norah and her parents have to be thoughtful about every bite of food that she takes, and make sure she gets enough insulin for her body to process the sugars. At first, the diagnosis was overwhelming to the parents, Aaron said, but Norah showed them that it’s manageable.

“She’s been incredibly resilient throughout this and takes it on head-first,” Aaron said. “As time goes on, the natural resilience of the child shows through. Somehow they make you feel more comfortable about the whole thing.”

And now, Norah has a new friend. “Luna,” named by Norah, has already proven her value as a companion, as the family and the dog are beginning their training with Kaarla Weston, owner of Gilford’s Golden Guardians. The training will likely take a full year, and if it’s successful, Luna will be a certified service animal that can accompany Norah anywhere she goes.

Aaron said Norah already “loves” Luna. Prior to being offered the opportunity, which came through Norah’s endocrinologist, he said he didn’t even know that dogs could sniff out a blood sugar crisis before it happened.

“As a family, we are incredibly grateful for their generosity,” Aaron said. “I can’t say enough about the dog.”

If things go as planned, the Boissonnaults will be the first of many families who will benefit from a clever companion, courtesy of M&M Island Cruises.

“We’re now working on dog number two,” Morris said. “Right now, we’re very confident that we can raise money every year for a dog for a little child.”