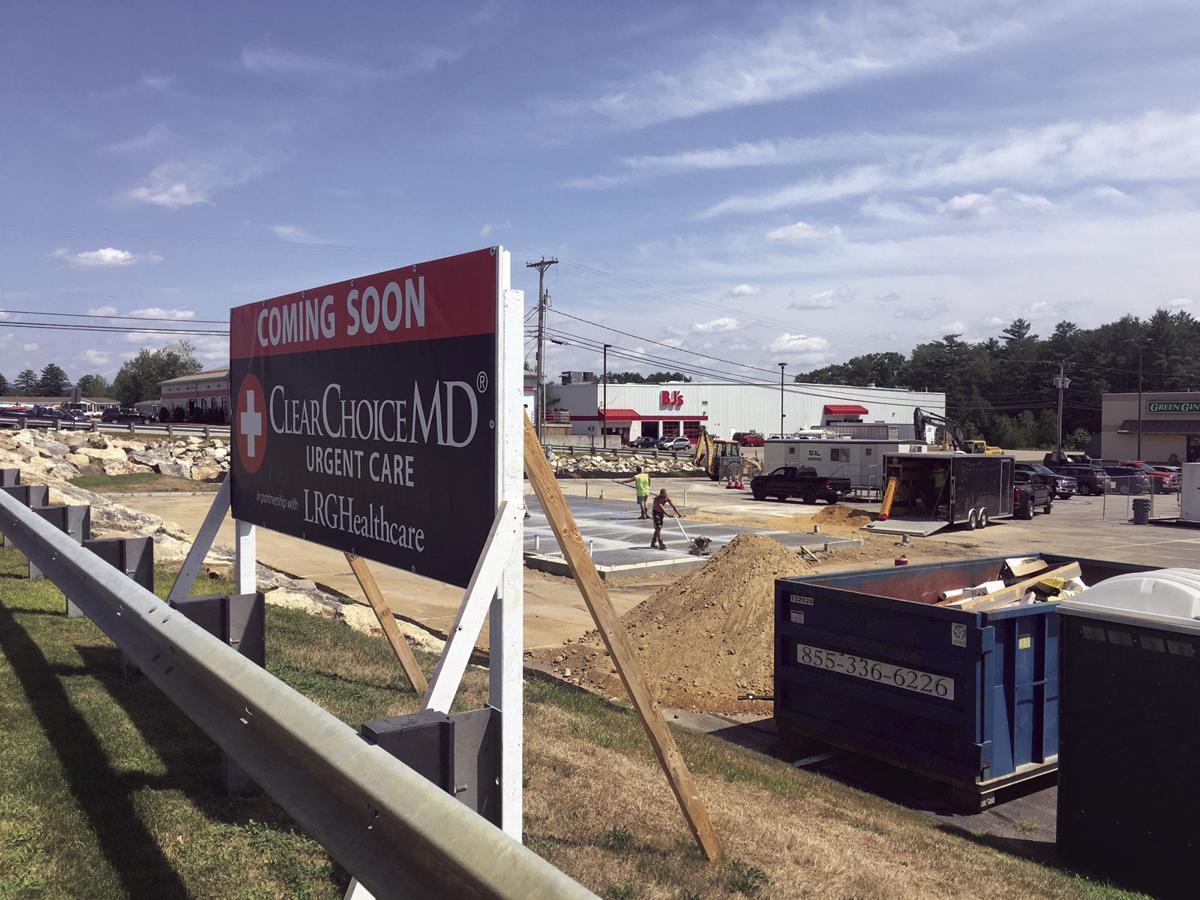 Slab work is being done on a ClearChoice MD clinic in Tilton, near Hobby Lobby. (Rick Green/The Laconia Daily Sun) 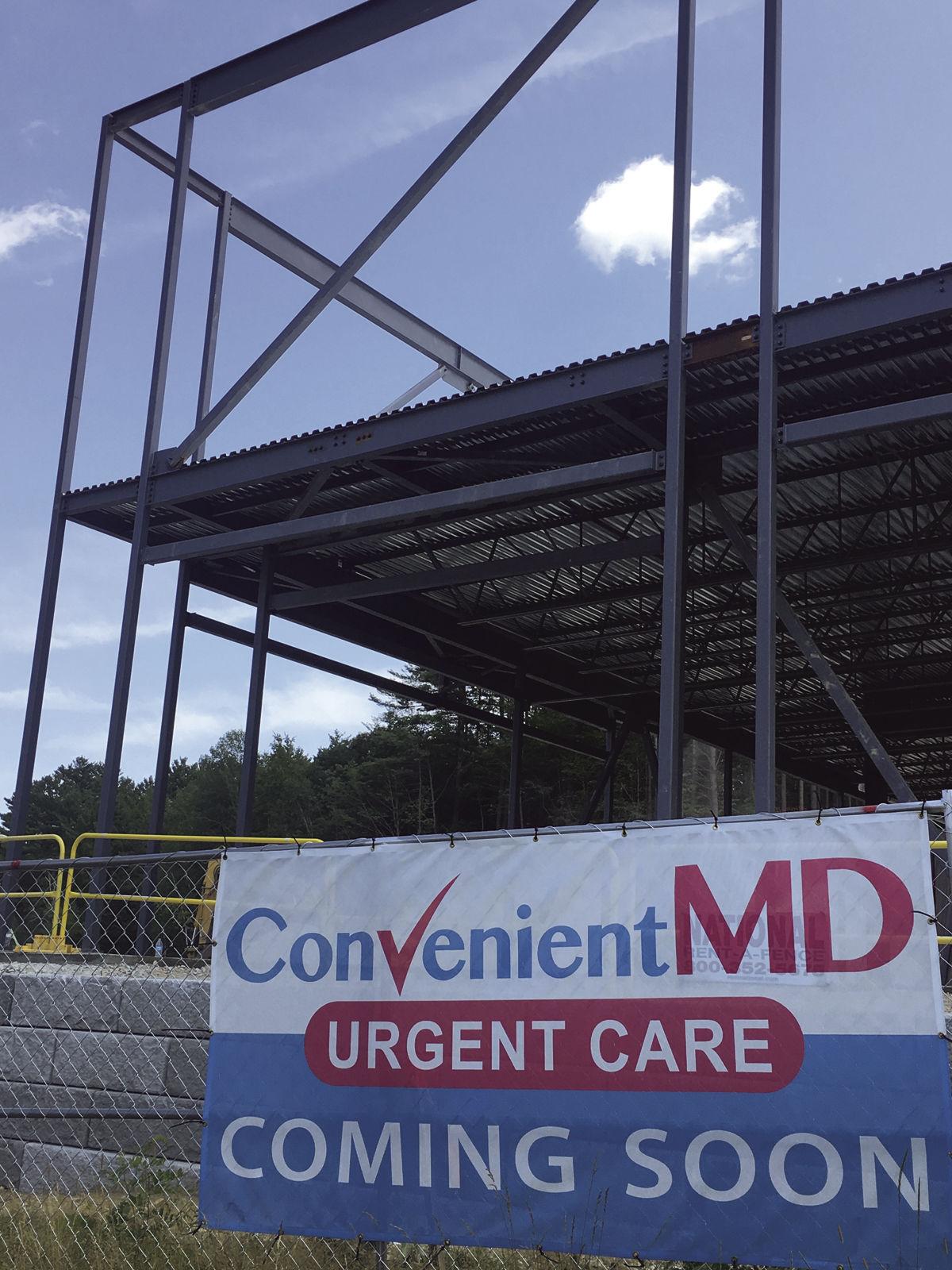 A ConvenientMD Urgent Care clinic is being built in Belmont, across the road from a ClearChoice MD clinic at the Belknap Mall. (Rick Green/The Laconia Daily Sun)

Slab work is being done on a ClearChoice MD clinic in Tilton, near Hobby Lobby. (Rick Green/The Laconia Daily Sun)

A ConvenientMD Urgent Care clinic is being built in Belmont, across the road from a ClearChoice MD clinic at the Belknap Mall. (Rick Green/The Laconia Daily Sun)

BELMONT — Three urgent-care clinics will soon be operating within 6 miles of each other.

ClearChoiceMD and Lakes Region General Healthcare collaborate in a clinic at 96 Daniel Webster Highway at the Belknap Mall in Belmont. It is open daily from 8 a.m. to 8 p.m. The two organizations are also partnering on another one being built at 75 Laconia Road near Hobby Lobby in Tilton. A fall opening is planned. Work is now being done on the slab.

Meanwhile, ConvenientMD Urgent Care is building a clinic at 73 Daniel Webster Highway, across the road from the Belknap Mall. Steel beams have been erected and a December opening is anticipated.

Max Puyanic, chief executive officer and co-founder of Convenient MD Urgent Care, said the site selection was based on anticipated need for medical services in the general area.

"Half the patients will have more than a 30-minute drive time," he said. "The site selection didn't have anything to do with ClearChoiceMD."

He said his company offers a broader range of service than other urgent-care providers. The clinic will have 12 examination rooms and a laboratory.

"Our goal is to be able to treat 70 percent to 80 percent of patients that walk into an ER," he said.

LRGHealthcare CEO Kevin Donovan said his health care system has a good, longstanding relationship with ClearChoiceMD, which is physician-owned and ---operated.

"They staff many of their clinics with providers who work for us in other capacities, too," he said in an email.

"I would say that there will be more than enough urgent care in the Lakes Region — and potentially too much. We’ve seen some communities, like Keene, NH, who have had ClearChoiceMD, ConvenientMD and hospital-sponsored programs all open around the same time. My understanding is not all of them have continued to exist after a period of time.

Two years ago, ClearChoiceMD closed a clinic it operated in Keene, leaving two other clinics to serve the community, one run by Cheshire Medical Center/Dartmouth-Hitchcock and the other by ConvenientMD.

"What we really know is that people want to see their primary care providers whenever possible, so we are working hard to improve that access," Donovan said. "We have hired a few new providers, increased our efforts to expand same-day access in our primary-care practices and implemented a central referral line for patients looking for a PCP."

In a news release last November, ConvenientMD Urgent Care said it had received a significant investment from Starr Investment Holdings and was expected to accelerate the company's growth and expansion throughout the Northeast. Its website lists 18 clinics in New Hampshire, Maine, and Massachusetts.

Dari Sassan, Belmont town planner, said ConvenientMD Urgent Care is putting up a 5,200-square-foot, one-story building across from the mall. Plans show a tower portion that appears to contain a second story but does not actually have usable floor space.

On its website, Convenient MD Urgent care said the Belmont clinic would offer “a high-quality, convenient, cost-effective option for treating injuries and illnesses. A full medical team is always on site, ready to treat all ages in a welcoming and friendly environment. When you have a minor emergency or just need medical care fast and easy, ConvenientMD will be available to serve you quickly, professionally, and affordably. No appointment needed — just walk in!”

ClearChoiceMD and LRGHealthcare announced in March that they were partnering to offer the Tilton clinic, in addition to their other walk-in facilities in Belmont and Alton.

"Because we prefer to staff our facilities with emergency department physicians, we know when the patient actually needs to go to the emergency department and when they require that level of care,” Hampers said. “I'd like to think we have a very low unnecessary send rate to the ED.”

Donovan announced in May that walk-in medical care would no longer be offered in the Laconia Clinic, 724 North Main St., after mid-July.

He said regulatory changes and revised air handling standards resulted in the decision to close that walk-in care service.