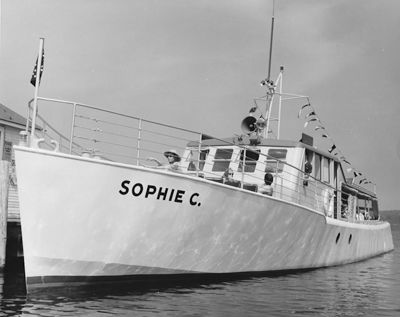 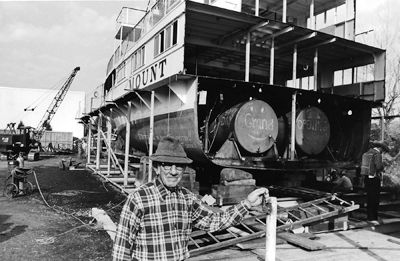 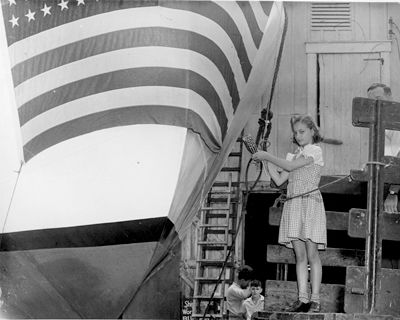 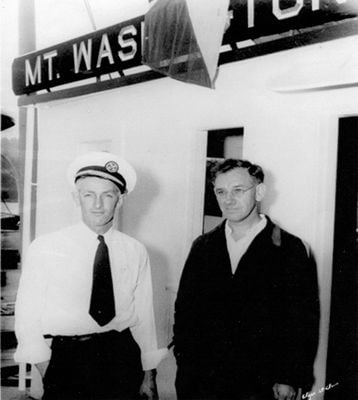 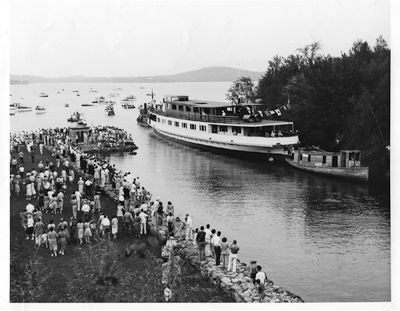 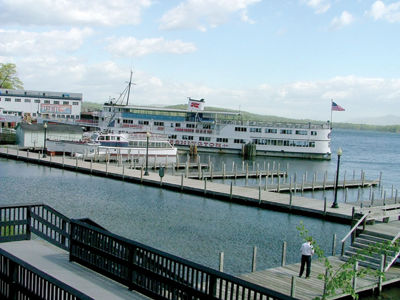 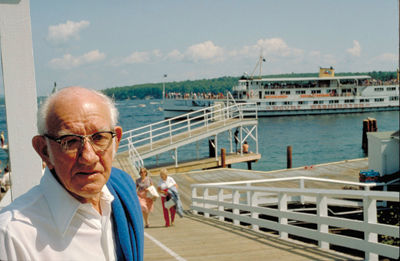 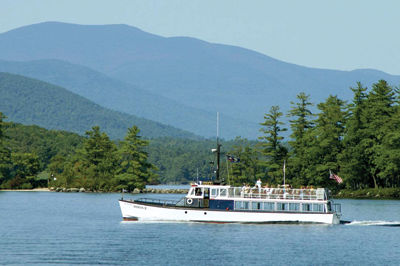 By ROGER AMSDEN, for THE LACONIA DAILY SUN

LACONIA — Byron Hedblom, the son of Danish immigrants who worked his way through college while holding down a full-time job with an engineering company in East Boston, has left a lasting legacy on Lake Winnipesaukee where three of the ships he built, the M/V Mount Washington, the Sophie C and the Doris E, remain in service with the New Hampshire Flagship Company.

"Without him, these ships wouldn't be here. It's a phenomenal legacy that he's left," said Jim Morash, captain and part-owner of the company, who worked with Hedblom during the time the Mount Washington was lengthened in the winter of 1982-83.

"Both he and Doris were very good to this young kid at the time," he said. "As my family has been associated with the lake and Bear Island for over a hundred years, he knew many of my relatives. It was a great time listening to the old stories Byron, Murray Ryder and Brian Avery told during the coffee breaks. I will cherish these memories forever. Byron lives on as long as the Mount Washington, Sophie C and Doris E continue to ply the beautiful waters of Lake Winnipesaukee."

Hedblom brought a family spirit to the cruise line which still is evident and Morash still runs into people today who worked with Hedblom during the 1940s and 1950s and have strong memories of the remarkable Hedblom family.

Hedblom was born in East Boston on June 12, 1904, the son of Carl Gustave Hedblom and Sophie C. Hedblom (maiden name Jensen), who had arrived in New York in 1898. During the 1920s he worked for the Bertelsen and Petersen Engineering company which later combined with the Atlantic Works in East Boston. While working as a supervisor of outside jobs, he attended Northeastern University at night, studying math, geometry and machine design.

On May 26, 1925, while supervising a contract to build an innovative new style of steel barges, an incident occurred which Hedblom recalled "could have changed my life forever and probably did." A large section of one of the barges was being lowered into position when it caught on an obstruction. Byron was pinned in a corner and both his legs were crushed.

At the Boston relief station where he was taken, the prognosis was that it would be necessary to remove both legs below the knees. But his father Carl arrived and intervened, insisting that the best surgeon in Boston be found. Byron was rushed to the Boston City Hospital emergency ward, where he spent 13 weeks with both legs in suspension. Both legs were saved. For the rest of his life he would walk with a very slight incline to one side, a distinctive trait that made him immediately recognizable from a distance to friends and family.

He would go on to found General Ship & Engine Works, with his father as a partner. Starting with a machine shop powered by an old tractor, he grew the shipyard into a thriving business which was contracted to build and repair ships for both civilian and military use. He also supervised the building of the Mount Washinton II.

When the side-wheeler Mount Washington burned at the Weirs Beach dock in December of 1939, Capt. Leander Lavallee, then in his 70s, was determined to replace the lost hull with a new, faster and bigger ship. After securing local support and forming a new corporation, he purchased the Chateaguay, a 203-foot-long ship with an iron hull in Lake Champlain for $20,000. The crew from Boston General Ship & Engine Works dismantled the Chateaguay hull, cut it into twenty sections and shipped it by flatbed railroad car from Shelburne, Vermont, to Lakeport.

They reassembled the pieces, constructed a new steel superstructure and outfitted the ship with two 750 horsepower steam engines, boilers included. The new vessel grew in the welding method of construction and was launched Aug. 15, 1940, with a length of 205 feet, a beam of 32 feet and a draft of 7 feet. Christened the S.S. Mount Washington II, the new ship would sail through some rough financial waters in the beginning, as the final bill for performing the phenomenal feat would exceed $125,000.

Within a year, to clear the indebtedness, the ownership was passed to Boston General Ship & Engine, which formed the Winnipesaukee Steamship Company, with Byron and Carl Hedblom each holding an equal number of shares. The company logo, and the ship's flag, would be a Danish flag superimposed with a W for Winnipesaukee.

Because of fuel shortages, the ship could not be operated until after World War II, and its engines were taken as part of the war effort.

It was around the same time that Byron Hedblom saw an advertisement for 65 acres of land for sale near Weirs Beach, and bought the plot on which he would build the Hedblom family home.

Hedblom recalled, "We were being pushed (at the end of WWII, in 1945) by the New Hampshire Public Utilities Commission as to when we would resume operations by the Mount Washington. We answered, as soon as engines could be obtained. (The Mount's engines and boilers had been taken by the Navy for the war effort).

"We decided to build a 65-foot boat to run short excursions from the Weirs to Wolfeboro, until the Mount Washington was running. I designed a vessel to carry about 150 passengers. We had a General Motors diesel engine, which we could convert from Electric Generation to Direct Reversing Mode. We also had steelworkers available for the job.

"We built the hull in the Mead Morrison shop, installed the engine and trucked it to New Hampshire where we finished it. We installed the superstructure in New Hampshire, launched the boat fully completed and named it 'Sophie C' in memory of my mother.

"We had a trial trip on VJ day in 1945. It was very successful and it went into service immediately. At the same time, we built a 45-foot service boat for carrying men and materials to ships away from our plant. The boat was called 'General.' After it was completed and tried out, my father said send it up to Lake Winnipesaukee, it's too nice to use for a service boat. We all made very good use of it. We were also sponsoring a Little League Baseball team. Our foreman electrician took care of the running of this operation and did very well."

The General served as Hedblom's private excursion boat until he reworked it and launched it as the Doris E in 1963.

In the aftermath of the war, Hedblom built a house at the Weirs that was initially used as a vacation home. The Hedbloms and their three girls, Dory, Janet and Carol, relocated from Boston and moved in permanently in 1952.

This extraordinary home, with its inspirations from naval architecture, became central to the memories of three generations of the Hedblom family. For children and grandchildren alike, the house on Scenic Road became the interior decor of memories and the surrounding 65 acres of fields and forests the familiar landscape of dreams.

Today, what is known by the family as "Meme & Dindy's House" is a bed and breakfast, the Lantern Inn.

The Hedbloms ran the Winnipesaukee Steamship Company from 1941 until they sold it in 1972. Hedblom was called out of retirement in 1982-83 to help with the project which saw the Mount Washington lengthened from 205 feet to 230 feet.

His extraordinary life spanned nearly 104 years, and he enjoyed it to the fullest until the very end.

The Sophie C at the dock. (Courtesy photo)

Grand Opening. The extension of the Mount, 1982. (Courtesy photo)

The Mount Washington II reaches the waters of Lake Winnipesaukee for

The Mount Washington and the Sophie C at the dock at Weirs Beach. (Roger Amsden photo)

Byron Hedblom at the Weirs with the Mount Washington. (Courtesy photo)