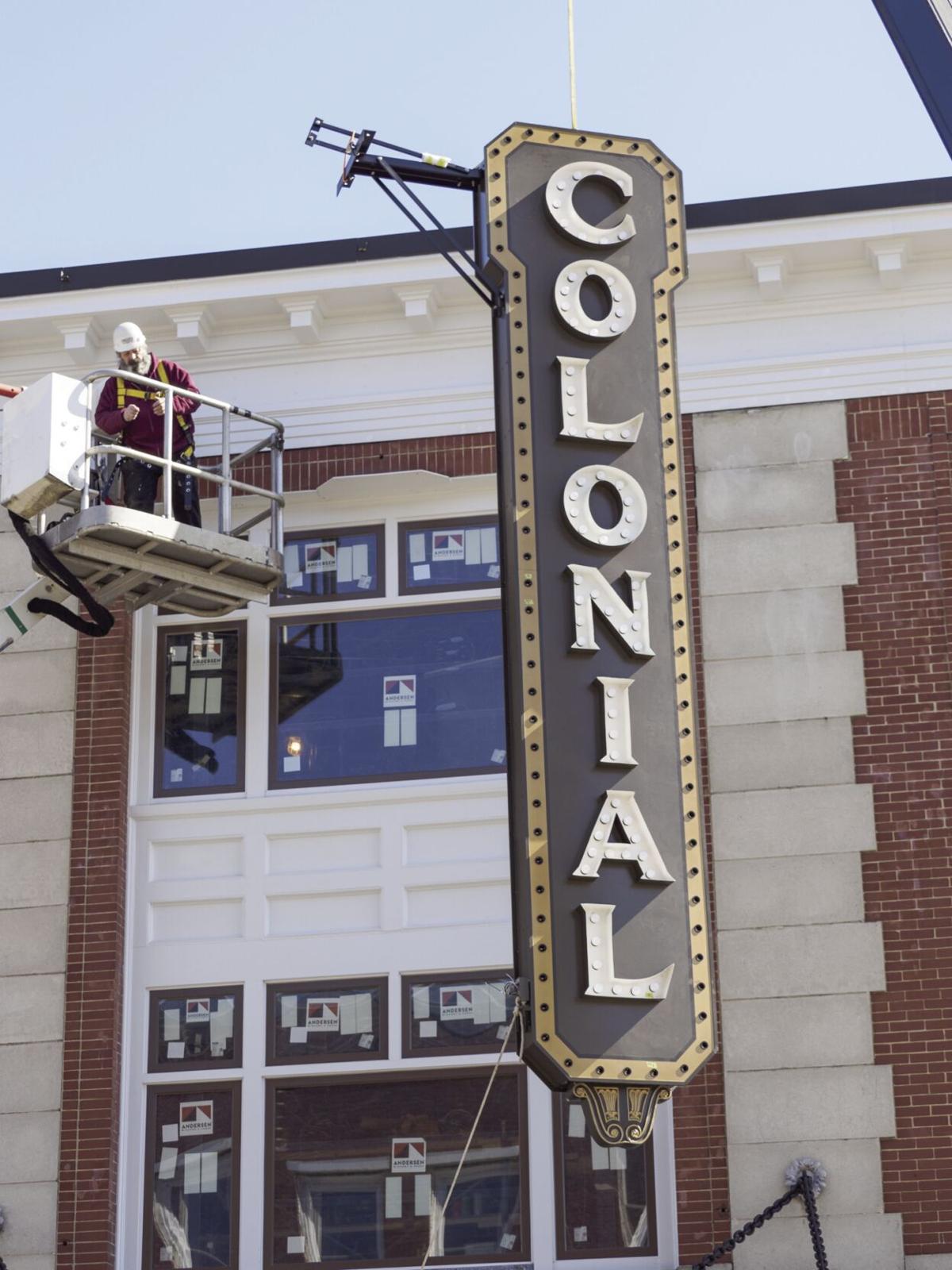 Workers from Advantage Signs of Concord, along with Sousa Signs of Manchester, set the Colonial Theatre's "blade" sign section in place in downtown Laconia on Tuesday. (Alan MacRae photo/for The Laconia Daily Sun) 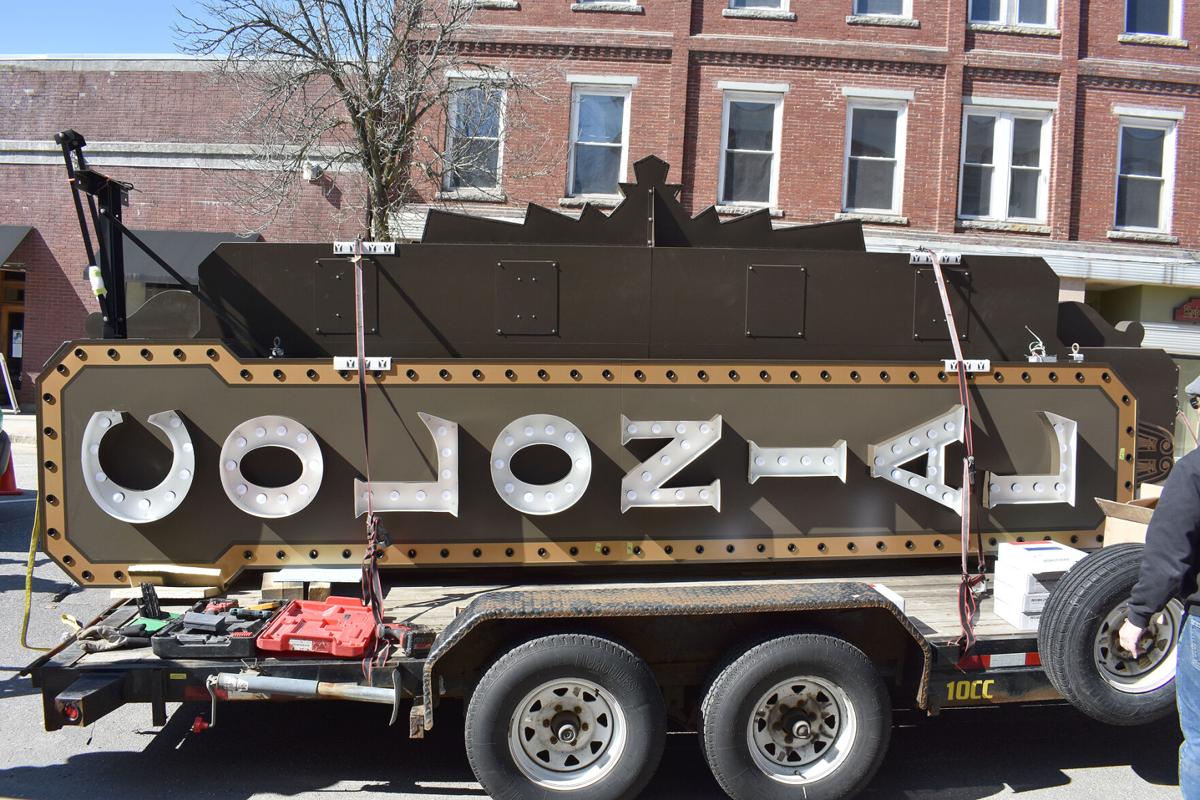 The vertical sign, known as the "blade," was installed on the exterior of the Colonial Theatre in downtown Laconia on Tuesday morning. (Adam Drapcho/The Laconia Daily Sun photo) 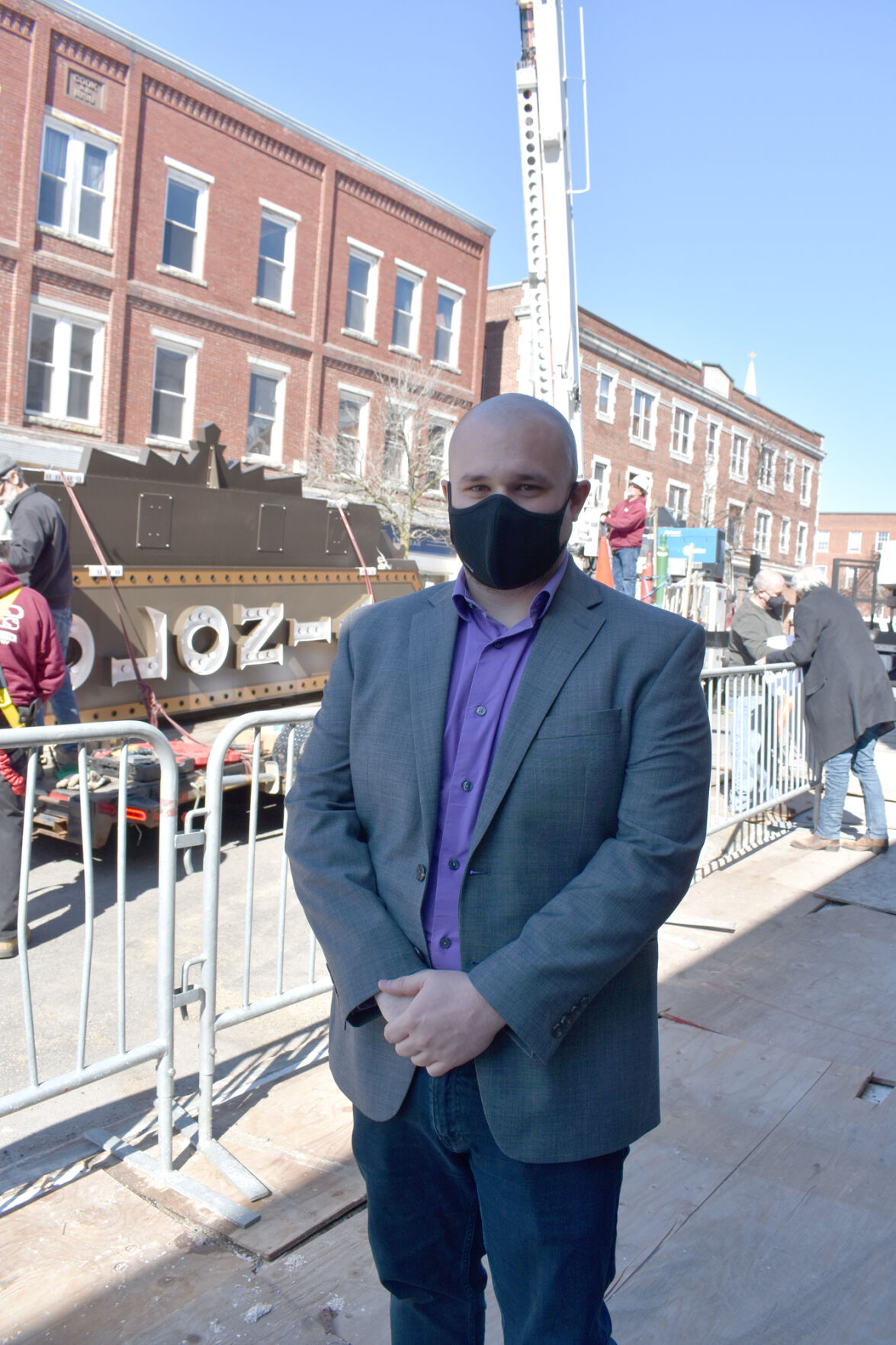 Brandon Caron, of Spectacle Management, said that he expects that the curtain will rise at the Colonial Theatre by this summer. (Adam Drapcho/The Laconia Daily Sun photo) 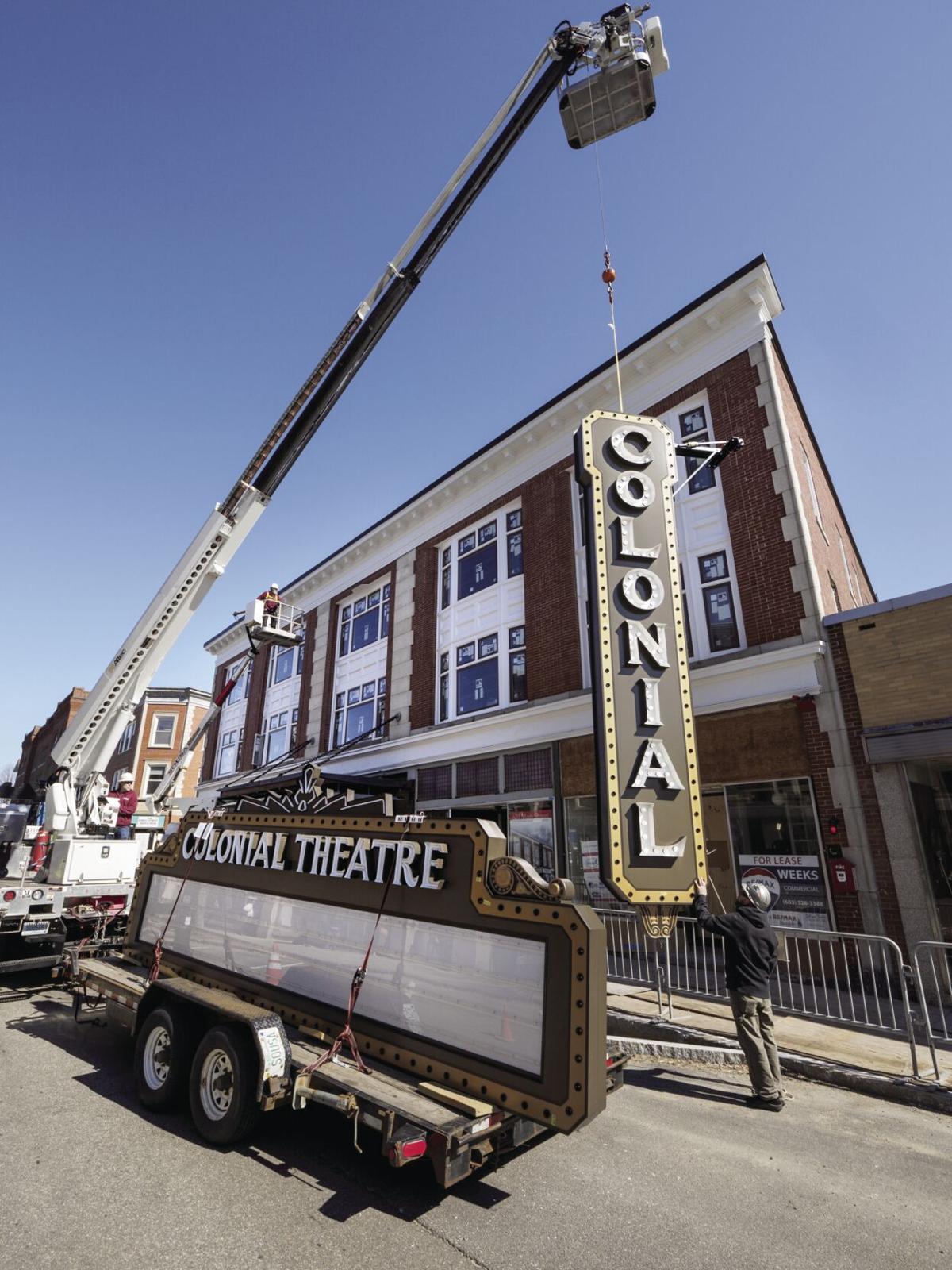 Workers from Advantage Signs of Concord, along with Sousa Signs of Manchester, hoist the Colonial Theatre's "blade" sign section in place on Tuesday. (Alan MacRae photo/for The Laconia Daily Sun)

Workers from Advantage Signs of Concord, along with Sousa Signs of Manchester, set the Colonial Theatre's "blade" sign section in place in downtown Laconia on Tuesday. (Alan MacRae photo/for The Laconia Daily Sun)

The vertical sign, known as the "blade," was installed on the exterior of the Colonial Theatre in downtown Laconia on Tuesday morning. (Adam Drapcho/The Laconia Daily Sun photo)

Brandon Caron, of Spectacle Management, said that he expects that the curtain will rise at the Colonial Theatre by this summer. (Adam Drapcho/The Laconia Daily Sun photo)

Workers from Advantage Signs of Concord, along with Sousa Signs of Manchester, hoist the Colonial Theatre's "blade" sign section in place on Tuesday. (Alan MacRae photo/for The Laconia Daily Sun)

LACONIA — Call it a sign of things to come. On Tuesday, the marquee and blade – the large, vertical “COLONIAL” sign – were re-installed on the downtown building that is being counted on to spark a revitalization of the city’s downtown.

“Life is incremental,” opined Warren Clement, one of the many onlookers and a former downtown business leader. “This is a big increment.”

The marquee and blade, built by Advantage Signs and installed by Sousa Signs, are one of the finishing touches on a year-plus renovation effort. The project, which cost $14.4 million, will result in a restored historic Colonial Theatre that will seat 750 and, proponents hope, generate new restaurants, cafés and shops nearby to cater to theatergoers.

Inside, the only remaining tasks are final finishing touches, such as painting, and cleaning up. Meanwhile, the company contracted to manage the operations of the theater, Spectacle Management of Lexington, Massachusetts, is planning how to handle such an anticipated opening in an environment that still calls for restraint due to the pandemic.

“Especially with the pandemic, we’re taking a crawl, walk, run approach,” said Brandon Caron, director of strategy and business development for Spectacle, which operates venues throughout New England, “we wouldn’t want to do anything that would jeopardize safety.”

However, they also understand that there is a city full of people who are itching to sit in the 1914 theater, now restored to its historic glory after sitting empty and moldy for many years. Caron said the company isn’t announcing any dates yet, but that “some smaller, socially distanced shows” could take place prior to Memorial Day. A schedule of events “should be coming very soon,” he said.

Spectacle’s list of upcoming events at other venues features musical acts such as Los Lobos, Joss Stone and Jake Shimabukuru, as well as comedians like Jay Leno. Caron said it could be that Laconia gets added to some of their bookings, but that the management company plans to treat the Colonial as its own venue, rather than an extension of their already established portfolio.

“We look to have a mix of genres, different types of music, comedy and other things, try to book a diverse list of performers,” Caron said, so that the Colonial will draw as many audience members as possible. He said Spectacle will use the initial bookings as a way to get a feel for the venue and local tastes. “We’ll take it slow for a couple of years to be sure that what we’re bringing is working. As crowds come and things normalize, we’ll increase that as well,” he said.

Caron noted that the Colonial won’t be reserved for just Spectacle bookings, and the venue will be open to weddings, dance groups, company meetings and community productions.

The renovation of the Colonial is a big deal for Bryan and Johanna Halperin, who are running the Powerhouse Theater Collaborative, a professionally managed community theater organization based in the Belknap Mill. Starting next year, Powerhouse plans to produce 10 shows a year, five smaller productions at the Mill, and five shows with broad appeal at the Colonial.

Why wait for 2022, though? The Halperins aren’t inclined to. They have a Zoom Play Festival, resulting from a playwriting workshop Bryan led last year, planned for April 16, and after that things are moving from the virtual to the face-to-face. A festival of short plays is planned for May 29 and 30 at Rotary Park, and the first Colonial show is in the books for Aug. 13-15. That show, Neil Simon’s The Dinner Party was originally planned for a year ago in Concord, but was delayed, so Bryan got the cast to agree to take their show to Laconia’s renewed stage.

The Dinner Party, with its cast of six, is something of a “soft opening,” Bryan said, for community theater at the Colonial. The big night is planned for Nov. 19, the opening performance of Our Town, a personal favorite of Bryan’s and a show he said will help audience members approach their life post-pandemic.

“My philosophy on Our Town is, you either love Our Town or you haven’t seen a good production of Our Town,” Bryan said. “A lot of theaters gravitate to it after a big traumatic event. It reminds us of what it is to be human. It’s almost like comfort food coming out of a pandemic, to remind you to be appreciative of what it is you have.”

With its ensemble cast, Our Town is also emblematic of the kind of community theater the Halperins hope to bring to the Colonial. There will be principal roles for the more accomplished amateur actors, but also many opportunities for local people who want to have their turn in the limelight.

Johanna said that it’s likely that the Colonial will draw actors from far and wide, too, seeking their chance to play a favorite role in a beautifully restored theater. “There’s a lot of theater nomads in the state,” she said.

All of Powerhouse’s Colonial productions will have open auditions, they said.

Last on the 2021 schedule for Powerhouse will be a musical adaptation of A Christmas Carol, in collaboration with North Country Center for the Arts at Jean’s Playhouse in Lincoln. If it resonates with local audiences, the show could become an annual tradition, they said.

Of course, making plans for 2021 means accepting some risk of change. As Johanna said, “Everything we’ve announced this year has the same asterisk that everything has this year… everyone has to be adaptable and flexible.”

You can visit the Belknap Mill’s website or the Powerhouse Theater Collaborative’s Facebook page to see when auditions are scheduled, or sign up for the Mill’s newsletter to be kept up to date.

The Colonial isn’t the only historic theater about to get a second act. The Lakeport Opera House, nearly 140 years old, is expected to open this summer.

The Opera House, located on the second floor of a building known by the same name at the corner of Union Avenue and Clinton Street, is in the middle of a renovation by developer Scott Everett. The Laconia Daily Sun’s offices relocated to the first floor of that building in April of last year. The building is managed by Paugus Properties.

Juliet Locke, property manager for Paugus Properties, said work on the theater is “progressing quite nicely.” The 225-seat theater could open as soon as June 11, with the Doug Flutie Band doing the honor – though she cautioned that COVID-related delays could crop up at any moment.

“There have been some great challenges, but we seem to be tracking nicely on schedule,” Locke said.

Everett’s vision for the Opera House, according to Locke, includes a mix of entertainment designed to appeal to all. There will be matinees on the weekends for children and residents of nearby senior housing, a “Best of Boston” concert series for weekends in the summer, and fine art performers, such as classical and jazz, on Thursday nights. The space will also be available to rent for functions, parties and meetings, she added.

“We are trying to cater to all the different tastes of the community,” Locke said.

Rounding out the trio of new stages coming to Laconia is the CAKE, which stands for the Chaos And Kindness Experience. Located in an historic church that was more recently home to a bar and restaurant, the CAKE is being developed by Justin Spencer, founding member of Recycled Percussion and the brand Chaos and Kindness.

Spencer said that the CAKE will be able to stand apart, even in a market with two other theaters and the Belknap Mill hosting occasional smaller productions. He learned how to do that during a decade-long run of shows Recycled Percussion put on in Las Vegas.

“We took all of our experiences in Las Vegas and put all those resources back in our venue here,” Spencer said. When the venue, located in Veterans Square, opens in about a month, people will see the best audio, video and lighting equipment available, and it will be accessible to everyone, he said.