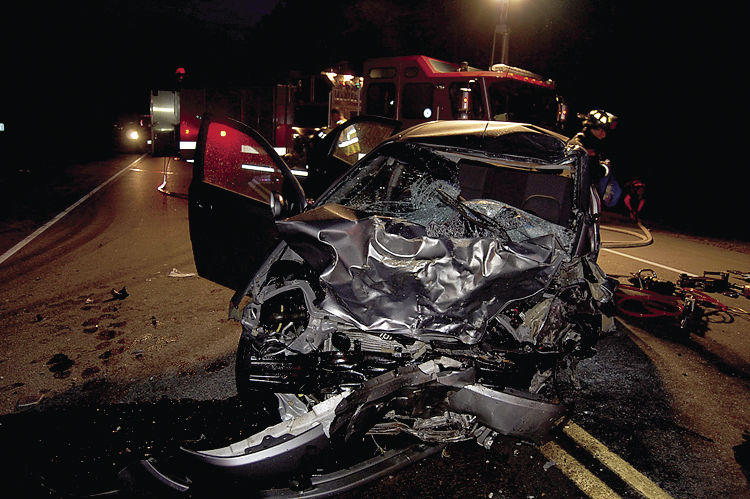 The front end of a car was mangled in a crash on Route 106 in Belmont Tuesday evening. The car first collided with a motorcycle, and then another vehicle. Police say the the car traveled in the wrong lane for 300 feet. (Courtesy photo/Belmont Police) 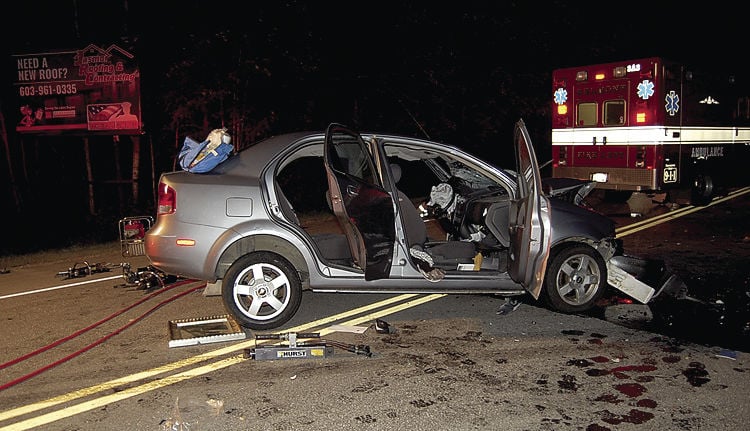 The car which collided with a motorcycle rests in the middle of Route 106 in Belmont Tuesday evening. The motorcyclist died in the crash, and the car's driver was critically injured. (Courtesy photo/Belmont Police)

The front end of a car was mangled in a crash on Route 106 in Belmont Tuesday evening. The car first collided with a motorcycle, and then another vehicle. Police say the the car traveled in the wrong lane for 300 feet. (Courtesy photo/Belmont Police)

The car which collided with a motorcycle rests in the middle of Route 106 in Belmont Tuesday evening. The motorcyclist died in the crash, and the car's driver was critically injured. (Courtesy photo/Belmont Police)

BELMONT — A motorcyclist was killed in crash on Route 106 Tuesday when he collided head-on with a vehicle that was traveling in the wrong lane, police said.

Police were not releasing the name of the motorcyclist Wednesday afternoon because some of his immediate family, who are out of state, had not yet been notified. They did, however, report the motorcyclist was from New Hampshire.

The crash occurred at 7:12 p.m. Tuesday on Route 106 just north of Brown Hill Road, when a subcompact car, driven by Tricia Abbott, 53, of Loudon, which was traveling south, crossed over into the oncoming lane just south of Seavey Road. The car traveled for 300 feet before colliding with the motorcycle, which was traveling north, police said.

A second northbound vehicle, driven by Ann Bridgeman, 47, of Laconia, was then struck by both the motorcycle and Abbott’s vehicle.

Abbott was trapped inside her vehicle. First responders used hydraulic tools to free her from the mangled wreckage. She was pulled from the vehicle unconscious and airlifted by DHART helicopter to Dartmouth-Hitchcock Medical Center in Lebanon, where she was in critical condition Wednesday afternoon, according to Belmont police Capt. Rich Mann.

Bridgeman was able to walk away from the accident, police said.

Both cars were considered a total loss, police said.

It was the second time in less than a week there had been a serious crash in that area of Route 106. Last Thursday a driver was injured in a crash involving an SUV, a jeep, and a 10-wheel dump truck.

Investigators from the Belmont Police Department and the Belknap County Accident Reconstruction Team were on the scene examining the crash site and collecting data until 3:15 a.m. Wednesday.

“This ia a very active investigation,” Mann said. He said investigators especially want to speak to any drivers who may have seen the southbound vehicle in the minutes just prior to the crash.

“If there is someone who can tell us about the pre-crash conduct (of that vehicle), that would be a big insight,” Mann explained, “We would really like to hear from someone with that kind of information.”

Mann said it was too soon to say whether “speed or driving impairment” were factors in the crash.

Route 106 between Seavey and Brown Hill roads was closed for eight hours while authorities conducted their on-scene investigation.

State Rep. Charlie St. Clair said this latest fatal crash underscores the need to install rumble strips along the busily traveled highway, which is a major corridor between Laconia and Concord.

“It’s a very quick solution,” said, St. Clair, whose district includes Belmont and who serves on the House Transportation Committee. “Rumble strips alert you that you have crossed the centerline.”

He acknowledged that some people, especially those who live close to busy highways, object to the strips because of the noise pollution. “But,” St. Clair said, “would you rather have that or the sound of metal on metal?”

Belmont police are being assisted in this matter by the state Medical Examiner’s office as well as the Belknap County Attorney’s Office. Gilmanton and Tilton Police Departments each sent officers to assist with road closure and establish traffic detours around the scene. The state Department of Transportation assisted by posting road signs on the highway to help traffic seek alternate routes.

BELMONT — The motorcyclist who died in Tuesday’s fatal accident on Route 106 has been identified as a Laconia resident.

How are your summer vacation plans likely to change as a result of the COVID-19 pandemic? How will this summer be different for you and your family? Click here to answer