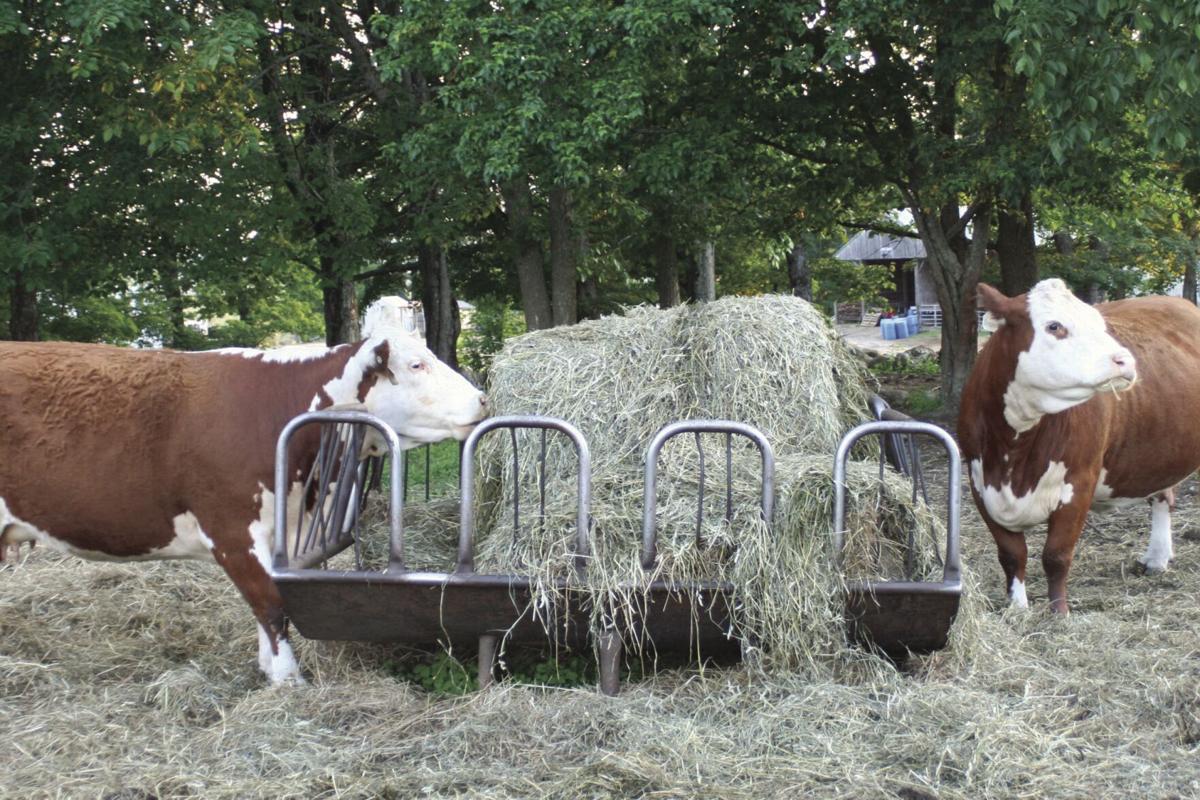 Rose and Keepers, Hereford cows, demonstrate the correct way to eat from a tombstone feeder. 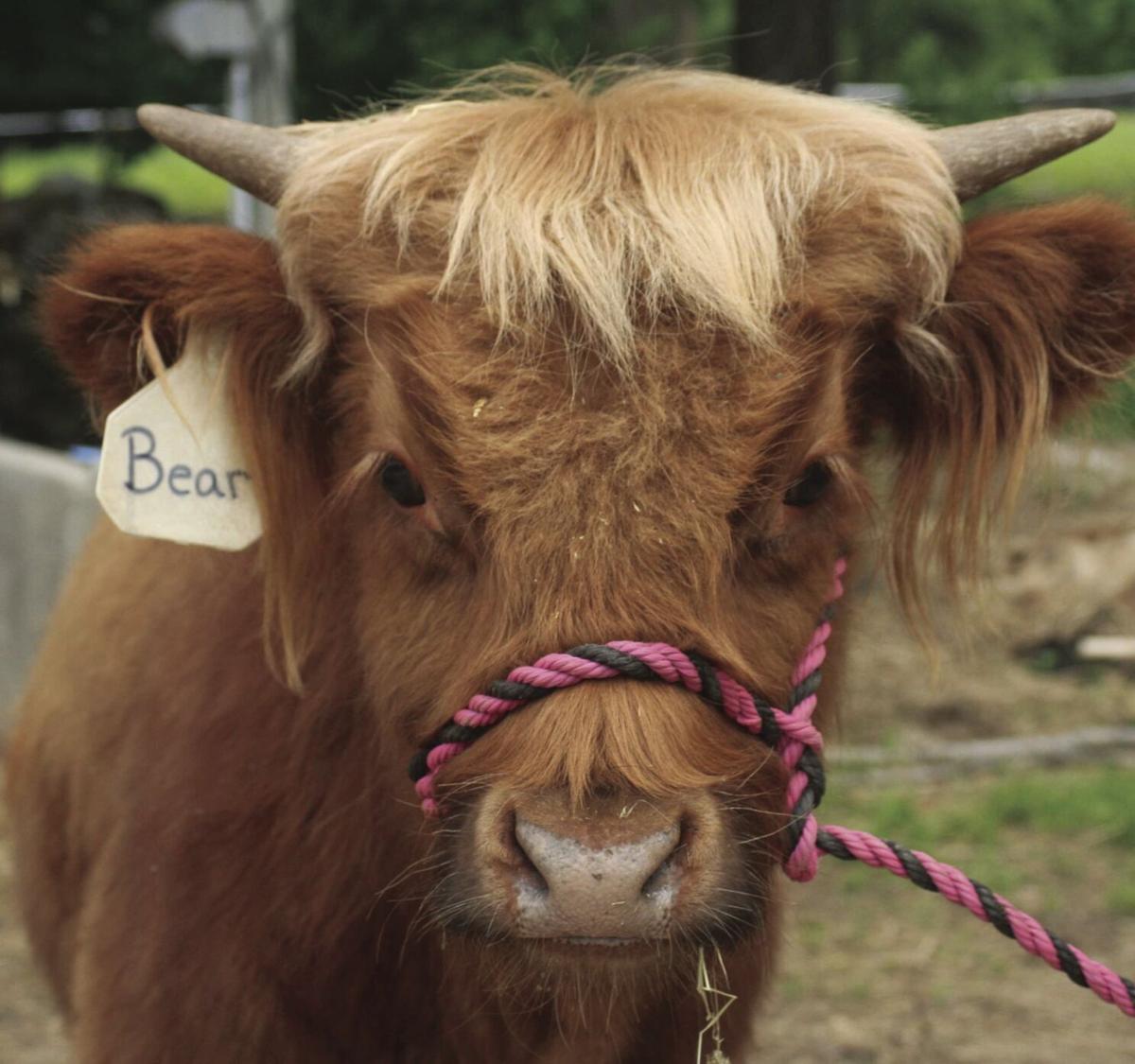 Bear, a Scottish Highlander in training to be a riding steer, recently had a dangerous encounter with a hay feeder.

Rose and Keepers, Hereford cows, demonstrate the correct way to eat from a tombstone feeder.

Bear, a Scottish Highlander in training to be a riding steer, recently had a dangerous encounter with a hay feeder.

It feels good to save a life. Of course, it's best to avoid accidents, but even with the best planning, they happen, and last week Bear, a Scottish Highlander yearling, needed rescuing. A favorite of mine, Bear, is in training to give rides to young visitors to Miles Smith Farm.

More than once, I've written about the dangers of a hay feeder. It's a large metal contraption set up so cattle can eat, but not waste, expensive hay. We have two different styles of feeders. One is called a "tombstone feeder," which holds the hay in place with twelve tombstone-shaped barriers. The cow lifts her head and then lowers it between two tombstones to eat. This system works well for large animals, but a yearling can get his head between tombstones and sometimes lacks the height or leverage to lift his head out.

The other feeder has a large metal hopper made of metal poles in the center. The hay goes into the hopper and drops down to a tray for cows to pull out and eat. It works well for young cattle, but bigger cows' longer horns can get stuck in it. Neither feeder is ideal, and during the winter, I don't use them. Instead, the hay is served on the frozen ground.

In warm weather, hay spoils quickly when placed on wet or muddy ground. So the cows trample it, mix it with mud, and then won't eat it. Can you blame them? To keep the hay clean and delicious, I use feeders.

The day of the accident, husband Bruce loaded the tombstone feeder with a bale, and after dinner, my puppy, Flora, joined me to check for newborn calves. As I walked toward the field with the feeder, I heard a soft moo, which was slightly odd. Then I saw the pregnant cows run toward the feeder, also odd. Cows know when one of their own is in distress, so worried that a cow in labor needed assistance, I walked faster.

Then I saw it; Bear with his head stuck between two tombstones, with Winnie standing nearby. Winnie swung her horns at Bear, bashing him. She could have been trying to help him escape. Or maybe she was bullying him, trying to shove him away from the hay. More likely, she was engaging in my least favorite bovine behavior – attacking a herd member who has been rendered helpless. A few more hits with her horns would probably have killed him.

After rolling under the electric fence to get into the field, I picked myself up and shouted, "Hey!" I'm acknowledged by all the cows as a leader (if only my staff agreed), so when I yelled, Winnie moved off. She and the other cows stood back, watching me while I tried to rescue Bear. He was wedged tight, and at first, I thought I'd need help. But I managed to get his little knobby horns up over the tombstones. Then with some gentle twisting, I turned and lifted his head free. A bit shaken, Bear moved off in a daze. To avoid a reoccurrence, I locked him and two other yearlings, with the same potential to get stuck, in the holding pen.

The next day Bear was his spunky self again. He's a lively but gentle spirit, similar to Curious Bleu, who's the star of my children's book, "The Curious Little Calf Named Bleu." Now, 9-year-old Bleu is a gentle giant who loves back scratches and carrots. Bear, his understudy, is like a younger, smaller Bleu.

I'm thankful I found Bear in time; I so want his story to be a long and happy one.