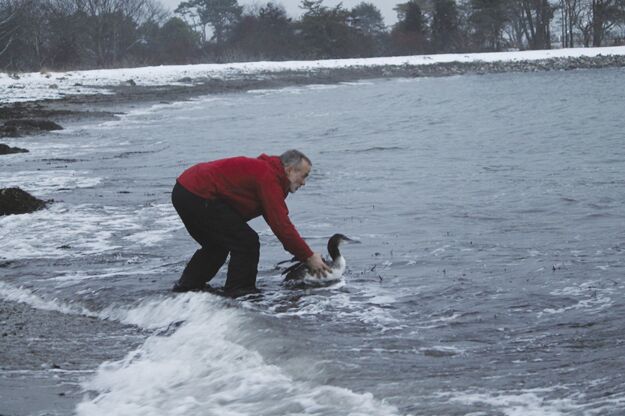 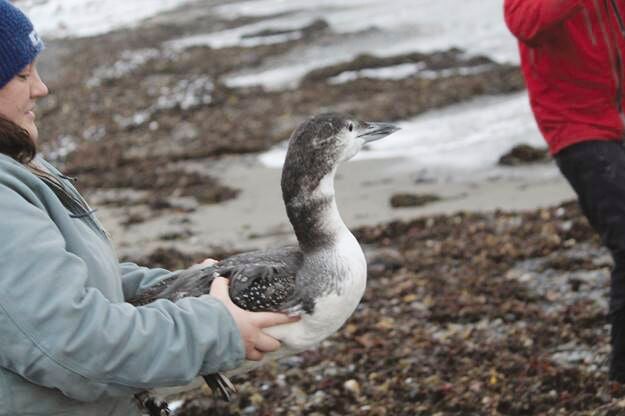 MOULTONBOROUGH — Cold weather following the December 17 snowstorm caused many of New Hampshire’s lakes and ponds to ice over, stranding six loons that had not yet left for their wintering grounds on the ocean. “Loons are heavy bodied birds with relatively small wings, which means that in order for them to become airborne, they need a long stretch of open water to act as a runway,” says Harry Vogel, senior biologist and executive director of the Loon Preservation Committee. “When lakes ice over rapidly, as we saw with the recent snowstorm and cold, loons can become trapped.” If not rescued, iced in loons may starve to death or be predated.

From Dec. 18 –21, biologists from the Loon Preservation Committee rescued five loons that had become stranded on four waterbodies across the state, including Webster Lake in Franklin, Lake Kanasatka in Moultonborough, Angle Pond in Sandown, and Townhouse Pond in Milton. New Hampshire Fish and Game Conservation Officers rescued an additional iced-in loon on Lake Francis in Clarksville. These loons were examined and treated by local veterinarians and rehabilitated by Maria Colby of Wings of the Dawn Wildlife Rehabilitation.

Vogel said that by this time of year, loons should have already left New Hampshire’s lakes. He noted that there are several potential reasons why these six loons may have remained. “Climate change is one potential explanation — until this recent cold snap, the weather in November and December was warmer than usual. These loons may have remained on our lakes to take advantage of the open water and fishing opportunities and may have been caught off guard by the sudden cold snap.” Another potential explanation, Vogel said, was that some of the rescued loons had underlying health problems. One of the loons that was rescued was found to have slightly elevated levels of lead in its bloodstream and fish hook fragments in its digestive tract, and another had a severe fungal respiratory illness.

Fortunately, there was a happy ending for most of the iced in loons. “After receiving veterinary care, five of the six have been released on the ocean,” Vogel confirmed. The loons were banded prior to release, so biologists will be able to identify them should they return to New Hampshire’s lakes in the coming years. “These ice rescues have already proven to have a positive impact on our loon population,” said Vogel. “In January 2016, we rescued five loons on Lake Sunapee. Four of those loons survived and were released on the ocean, and in recent years, we’ve resighted three of them back on our lakes. Two have produced chicks since their rescues, helping to grow our threatened loon population in the state.”

Members of the public are asked to call the Loon Preservation Committee at (603)476-LOON(5666) if they see a loon that is at risk of becoming iced-in. LPC urges the public not to attempt to rescue loons themselves. Winter loon rescues can be hazardous to human safety, as rescuers risk falling through the ice.

The Loon Preservation Committee monitors loons throughout the state as part of its mission to restore and maintain a healthy population of loons in New Hampshire; to monitor the health and productivity of loon populations as sentinels of environmental quality; and to promote a greater understanding of loons and the natural world. LPC was formed in 1975 in response to a severe decline in New Hampshire’s common loon population. For more information on loons or to make sure that the bird you are seeing is actually a loon, please visit the Loon Preservation Committee website at www.loon.org