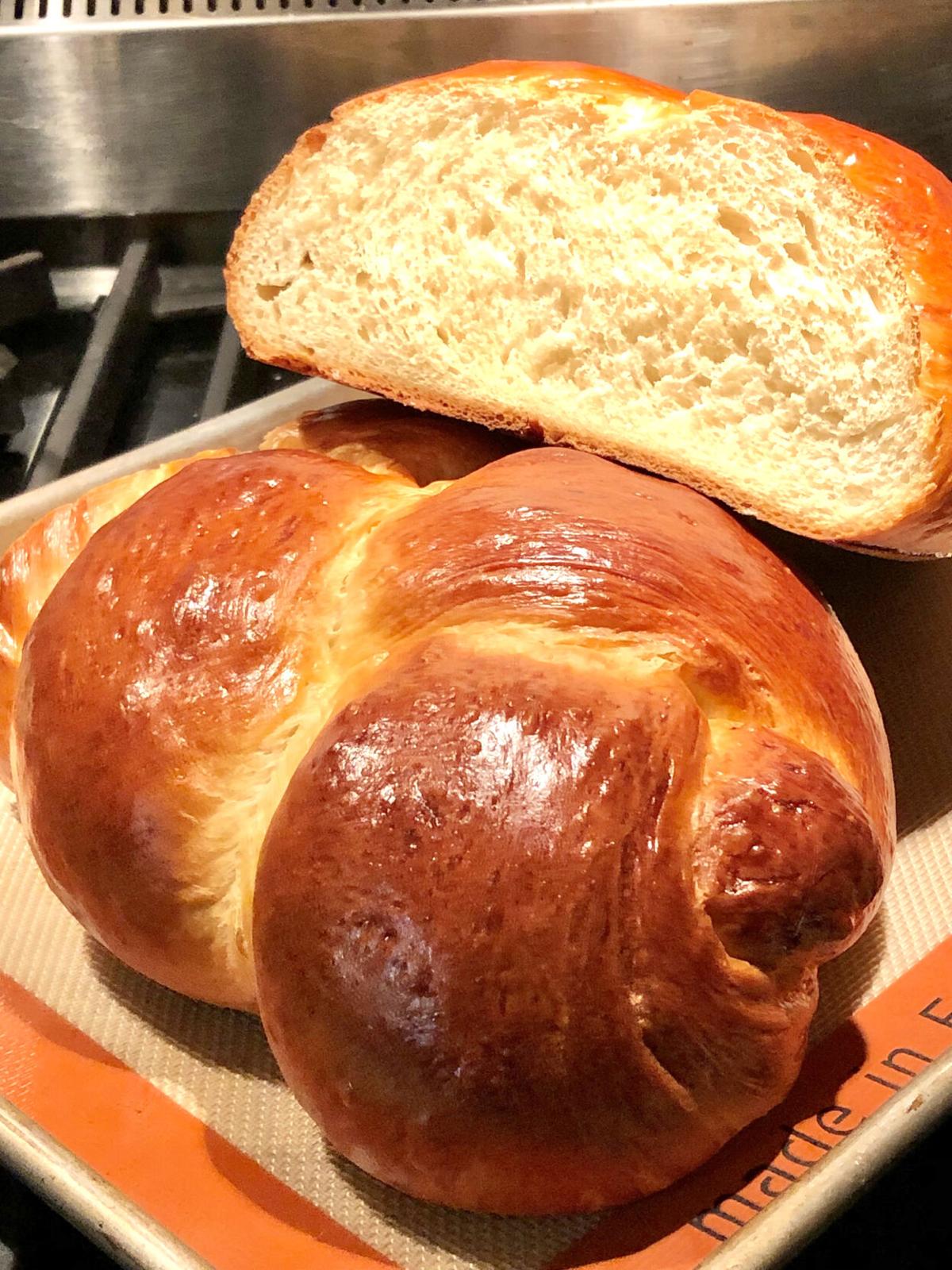 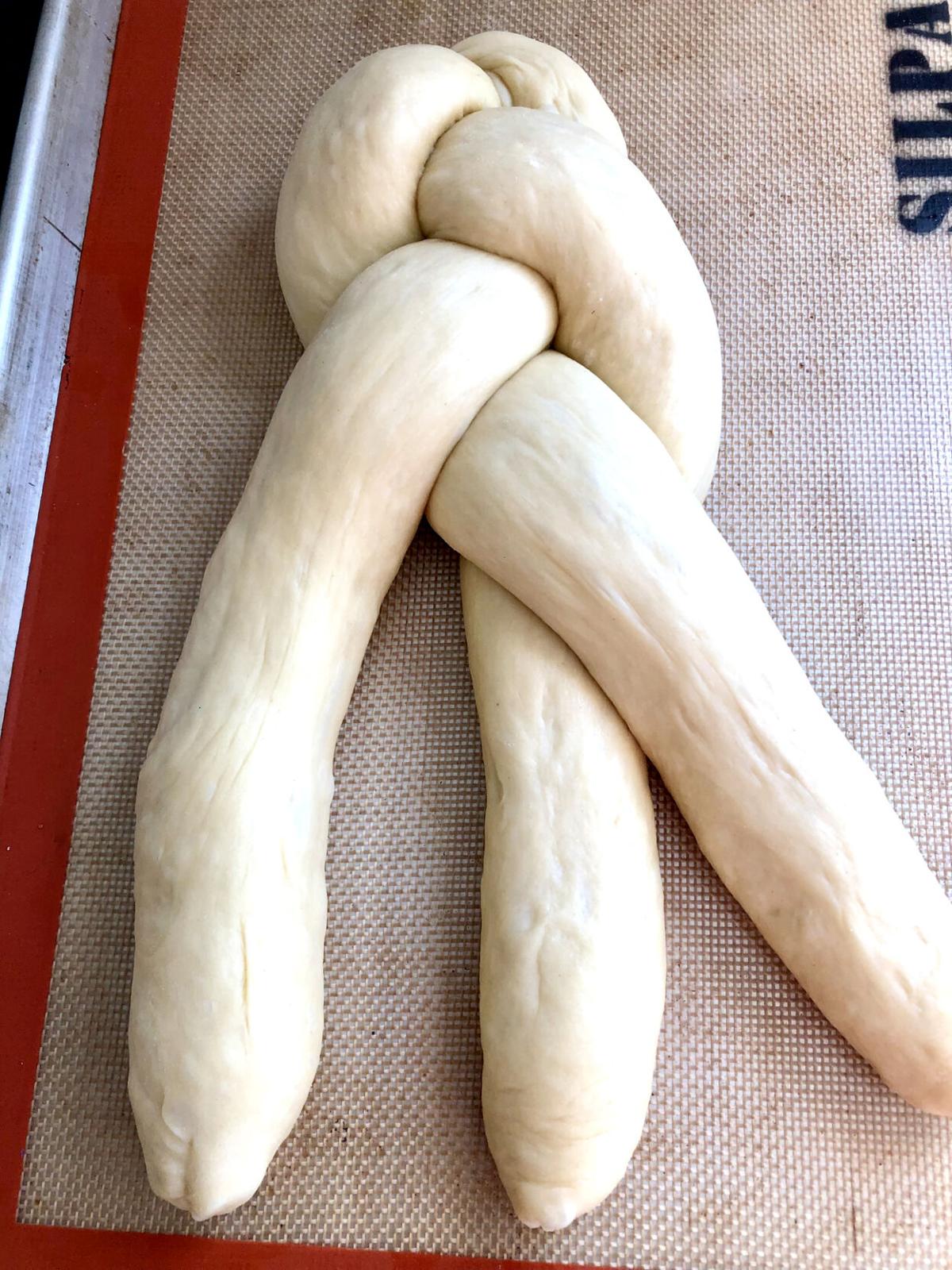 Halfway through the braiding. (Courtesy photo) 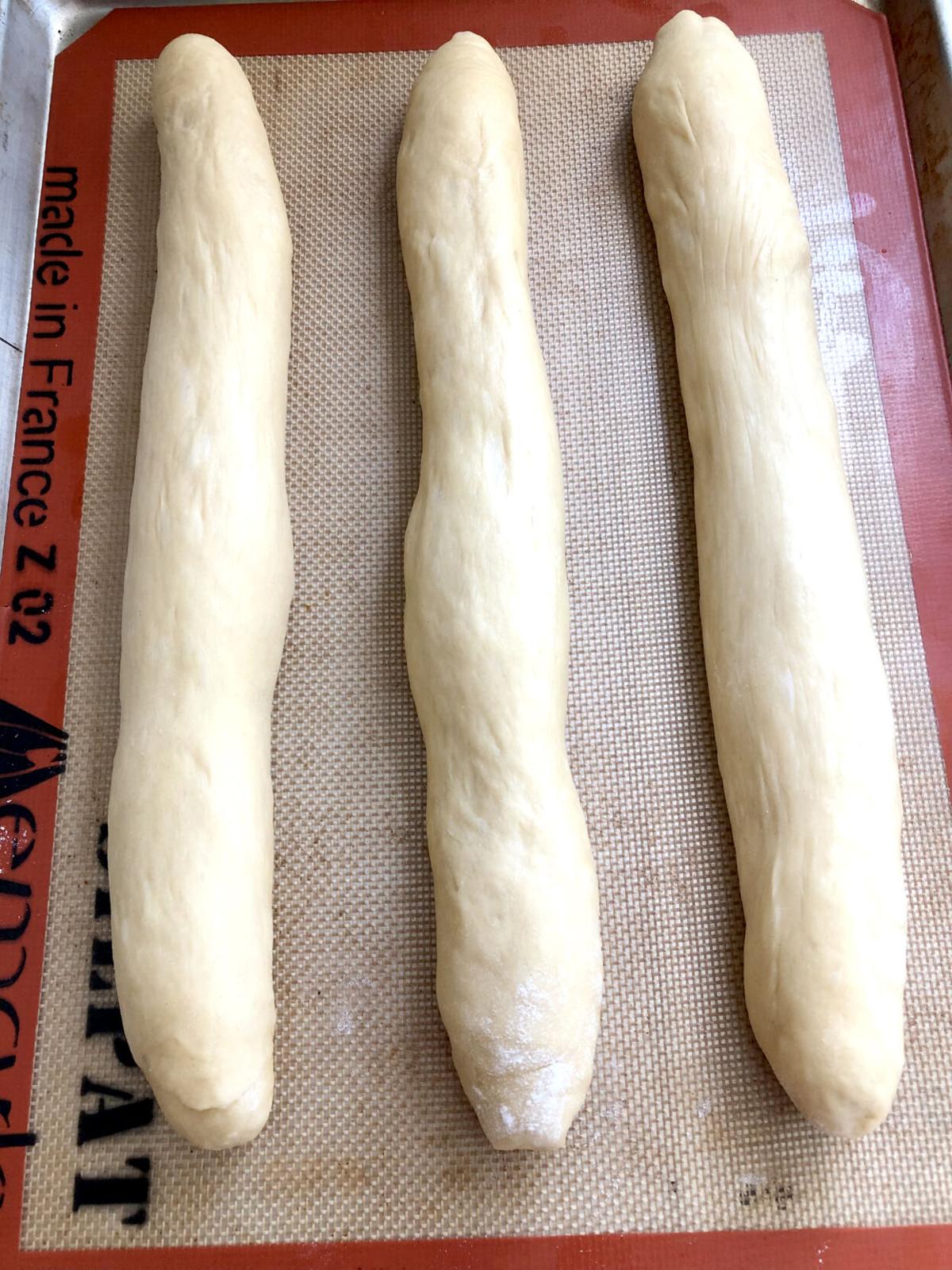 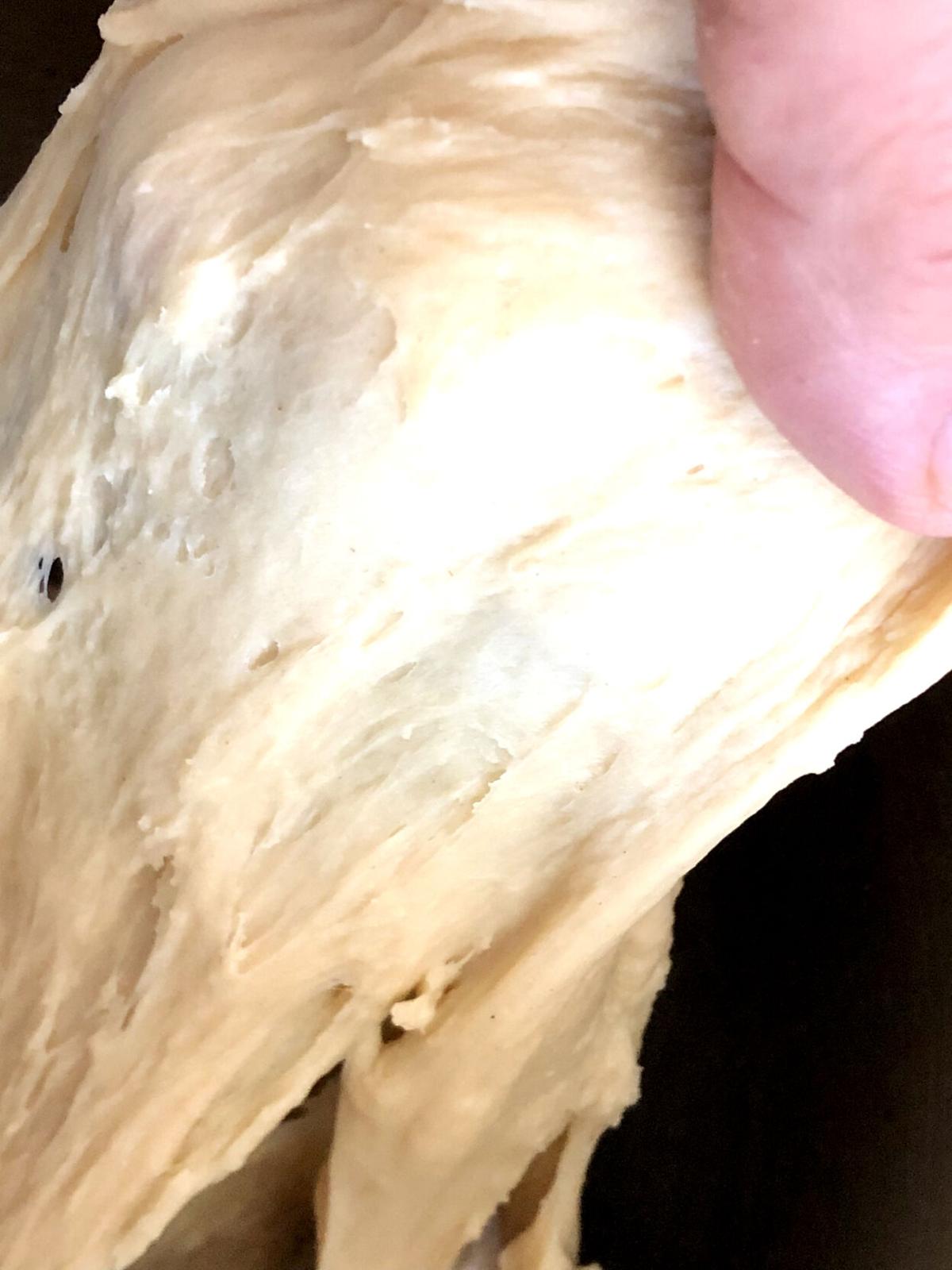 Halfway through the braiding. (Courtesy photo)

Challah, along with French baguette, German pumpernickel and San Francisco sourdough is one of the great breads of the world. The classic challah is a rich, sweet, eggy bread served on Jewish ceremonial and religious occasions, such as Shabbat and on holidays like Rosh Hashanah. It is a crucial part of the meal, as it serves a specific religious purpose. This flavorful braided bread with its gorgeous glaze makes it an impressive sight at any table. It’s also outstanding baked in a loaf pan and used for delicate afternoon tea sandwiches. Another favorite is bread pudding or French toast. Challah is often mistakenly referred to as a brioche bread which contains butter. A true Challah, under Kosher guidelines, doesn’t contain dairy.

The ingredients are pretty straightforward: All it takes is eggs, flour, water, sugar, yeast and salt. The process takes some patience as it’s a slow rising dough. It is very easy to overwork the dough, which can make it dry or tough. I added the olive oil and honey for additional flavor. Traditional challah is like a baguette; it's only good for a day or two until it dries out. Adding oil prevents this, allowing you to enjoy the bread for up to 3-4 days.

This bread can easily be made by hand, just resist adding additional flour as you knead the loaf. The oil also makes this a soft dough which is why I use the paddle attachment instead of a dough hook for mixing. Resting the dough after its first rise and before shaping is a professional step which is called benching. The 15-minute rest allows the dough to rise slightly which tenderizes the dough and relaxes the gluten that was developed during kneed. This makes it much easier to shape the dough into long strips.

I wait to brush the loaf with the egg glaze until after it has risen 50%. If you brush it earlier the risen portion will not have the glaze and have different coloring of the crust. Brushing the loaf with three coats also develops the impressive shiny egg shell crust because you are slowly working the egg into the dough's outer surface.

In a medium size bowl, beat 2 eggs until smooth. The remaining egg will be used later for the glaze. Add the oil, honey and salt and continue mixing until evenly incorporated and smooth. Set aside until needed.

Warm the water to 115°F. Pour the water into the bowl of a stand mix, then stir in the yeast. Let stand in a warm spot until the yeast rises to the surface forming a foamy raft, about 10 minutes.

Add the paddle attachment to the mixer. Add the egg mixture to the water. Add the flour gradually while you knead on low speed or by hand in a bowl. Continue kneading for about 5 minutes. Stop the mixer, lower the bowl and scrape dough from the paddle and bowl. Turn the dough over and continue kneading. Repeat this these steps four more times until a smooth and elastic dough forms. The dough is elastic when it is stretched and forms a thin translucent layer without tearing. Total kneading time will be about 20-25 minutes.

Place the dough in a lightly oiled bowl. Cover with a damp cloth and place in a warm, draft-free spot. Allow the dough to rise until doubled in volume, about 60-90 minutes. Keep the towel damp during rising so that a crust doesn’t form on the top of the dough.

Gently deflate the dough, pressing out all the gases. Turn out onto a lightly flour dusted counter and divide into 3 equal portions. Each portion should weigh about 11 ounces. Gently roll each portion into a ball. Space the balls a few inches apart, cover with a slightly damp towel and let rest 15 minutes. This rest relaxes the gluten in the dough making it easier to roll into the long strips.

After 15 minutes roll each ball into 14-inch-long strips. Place the strips side by side on a parchment-lined sheet pan.

Start your braid from the center of the strands to give both ends of the loaf an equally-portioned finished look.

Take the left strand (1) and cross it over the middle strand (2).

Take the right strand (3) and cross it over the middle strand (2).

Pinch the ends together to seal the loaf, then repeat the process going up the rest of the dough. There is no need to keep track of which strand was originally number 1, 2 or 3 as you go because the pattern is the same the entire time.

Place in a warm spot without drafts. Mist the loaves with water occasionally to prevent a crust from forming. Let rise for 30-45 minutes or until about 50% larger.

In a small bowl, beat the remaining egg until smooth and light in color. Strain the beaten egg to remove any small pieces for a smoother, more refined glaze.

Using a soft brush, dip the brush into the egg and gently scrape one edge against the top of the bowl, this gives you a more controllable amount of egg to use when glazing. Gently brush the egg over the loaf with short back and forth strokes giving it three coatings. Be careful not to let the egg run down the side of the loaf onto the pan. Any egg that accumulates on the pan will burn and give the loaf an unpleasant taste and color. Continue rising until double in volume, about another 30 minutes.

During this last rise, adjust the oven rack to the lowest level and preheat the oven to 350°F.

Place the loaf in the oven on the adjusted rack and reduce the oven temperature to 325°F. Bake for approximately 30 minutes. To test for doneness, feel the top center of the left and it should feel firm. The crust should be shiny with a dark brown color. Cool on a rack away from drafts. As the loaf is cooling it's still cooking since the internal temperature is still very hot. Once the loaf is completely cooled, store it in a plastic bag at room temperature.

Now that we have plenty of snow, what is your favorite outdoor winter activity?