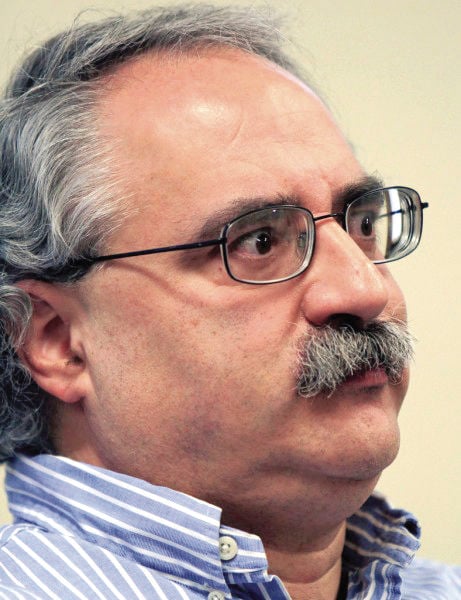 Scott Farah, the man behind the massive FRM Ponzi scheme, testifies at a state hearing in 2010. (Courtesy photo)

Scott Farah, the man behind the massive FRM Ponzi scheme, testifies at a state hearing in 2010. (Courtesy photo)

Scott Farah, who was convicted in 2010 for masterminding the biggest Ponzi scheme in New Hampshire history, is scheduled to be released from prison on June 15 to serve out the last three years of his term at home.

The 56-year-old Farah, who is currently incarcerated at Loretto Federal Prison in Cresson, Pa., would first stop at a halfway house in Manchester before being transferred to home confinement in Moultonborough, where his father, a former pastor, lives. He is scheduled to complete his sentence in October 2023.

The move appears to be part of the federal government’s attempt to alleviate crowded prisons in light of the coronavirus pandemic.

According to a memo issued March 26 by U.S. Attorney General William Barr, home confinement can be given to “at risk inmates who are nonviolent and pose minimal likelihood of recidivism.”

It adds that the prison’s warden should consider the “totality of circumstances for each individual inmate” before allowing home confinement, including, “age, vulnerability” and the nature of the crime, because “serious offenses should weigh more heavily.”

“This is not some clown,” said Harry Bean, a victim of the Ponzi scheme who is now a state representative from Gilford. “He committed the worst financial crime in New Hampshire history. That’s the guy they are talking about turning loose.”

Farah and his partner Donald Dodge were behind the Financial Resources Mortgage, or FRM, fraud, convincing about 200 investors to part with a good portion of their life savings to invest in various commercial mortgages. The Meredith firm collapsed in 2009, and the state Banking Department forced it into bankruptcy, leaving few assets and $80 million in claims following. It also led to years of investigation into the actions of the banking department, the Bureau of Securities Regulation and the Attorney General’s office.

Dodge, who was sentenced to 6½ years in January 2011, was released on January 2017. That was OK with Bean, who forgave him. “He was the pawn. Farah was the kingpin,” Bean said.

At the end of it all, victims lost about $20 million. The bankruptcy trustee issued a final report, in April, saying it managed to collect $11.85 million, distributing about $4.6 million to victims.

But some of that money was collected from the victims themselves. For instance, Al and Susan McIlvene of Kittery Maine, say they had to pay $50,000 to the bankrupt estate to hang on to two mortgages worth $150,000, but the couple, now in their 80s, say they lost nearly $850,000 to FRM and got no distribution from the trustee.

“More money went to legal fees then to the victims,” said Susan McIlvene.

“That this man should be released given his horrendous crime – at least Dodge accepted responsibility. Farah never expressed remorse,” Al McIlvene said.

Bean, 64, said he lost nearly $2 million and received about a $100,000 distribution. Bean, who said he caught wind of the release a few days ago, said he protested to the Loretto prison, and then to the North East Regional Director of Prisons, but so far to no avail. Neither responded to NH Business Review inquiries by deadline.

“I’m upset,” Bean said. “We went to sentencing, and the earliest possible time he would get out of prison, if he was an angel, was in 2023. And now they are letting him go.”

Harry Bean is no victim. He is one of the biggest bullies in the lakes region. Stop giving him a platform.

The real Ponzi scheme was conducted by the lawyers and the attorney general. You don't even know the half of what went on. Instead of going after the criminal, the state decided to viciously attack anyone associated with Scott even though they had nothing to do with the scheme and had no knowledge of it!! There was no end to the vicious attacks performed on innocent victims by the state of NH!!!! The state even maliciously attacked a church and food pantry, putting a lot of people, who needed the services provided by those institutions at risk! The state didn't care how many innocent lives they destroyed in their very own Ponzi scheme!! And trust me, many innocent lives were destroyed. The state used Scott as a reason and justification to attack innocent persons who, in most cases, didn't even know what was going on! So, why were the state officials who conducted these attacks on the innocent not jailed????? And the attack on the church and food pantry????? Well, I'm sure God will handle the ones that executed that attack!! He will come for them when they least expect it! I'm glad it's them and not me! It takes truly sick individuals to use the acts of a criminal to prey on churches and those in need!! The state should be truly ashamed of what they did in this situation! Look at the facts and you will clearly see there are multiple criminals here!! The authorities of the state of NH who launched the attacks on the church, its devoted and loving pastor, its parishioners, and the families relying on the food pantry. And then you have the criminals mentioned in this article. Time to drag the truth out and bare all to the world! State officials are not always lily-white and clean like the news makes them out to be!!