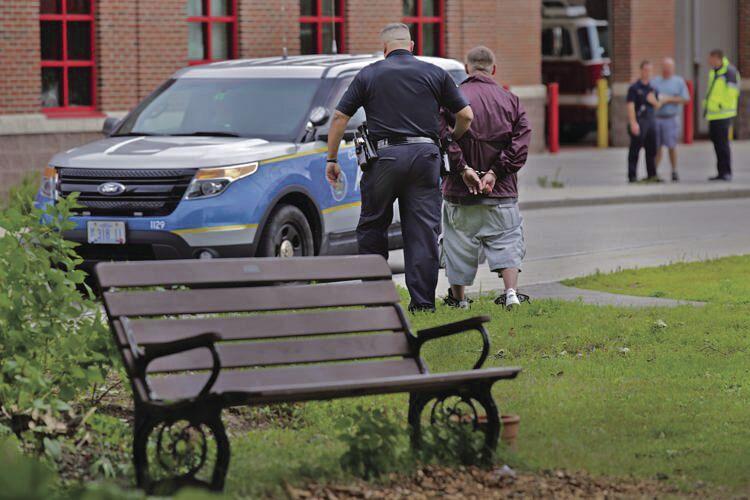 Police have wide discretion in how they resolve situations. Diversion programs are one alternative to arrest. (Bill Gnade file photo)

BRATTLEBORO, Vt. — Officer Matt Lima of the Somerset Police Department pulled up to a Stop & Shop in Massachusetts for a report of shoplifting around 5 p.m. on Dec. 20, 2020. An employee had seen women putting groceries in bags without scanning them — various food items, including a ham, totaling about $220.

Lima spoke to the women, a mother whose two kids were with her and their aunt, he recalled in an interview. They admitted the theft, told him they knew it was wrong and had no prior records.

Getting emotional, the aunt “gestured towards the kids and said it was Christmas dinner,” Lima said.

He decided not to charge them.

“Obviously, what the two women had done was wrong. Stealing is wrong — it’s beyond question,” Lima said. “But to me the individual factors outweighed the enforcement side of it.”

Lima wrote up notices banning them from the store and escorted them outside. Then he handed them $250 in gift cards he had just bought, “so they could go to a different Stop & Shop and buy their food for Christmas.”

A feel-good holiday story that was picked up by the Associated Press, the incident also illustrates a key aspect of policing. Responding to complex situations on a daily basis, officers have wide discretion in how they enforce the law. And some police departments are using that discretion as a basis for programs that route people away from the legal system — a more formal version of what Lima did in that grocery store.

Known as police-led diversion, the practice has been implemented in different forms in Brattleboro and towns on New Hampshire’s Seacoast.

Diversion programs steer low-level defendants out of the court system entirely. That often happens when a case reaches the prosecutor’s office or the court.

Police-led diversion takes place one step earlier, generally for more minor cases. Some experts suggest it has the potential to reduce arrests, which can have real impacts on people — from hours in jail to public embarrassment — regardless of what happens later in a case. Police diversion programs can also connect people directly with social services or other help.

“I don’t care how many times you steal a Snickers bar or, you know, walk around downtown in an area you’ve been trespassed from, you’re not gonna be incarcerated,” he said in December, before his retirement. “So how do we reach this individual to explain to them, you know, what they’re doing is wrong? And how can we get them to understand that and not do it anymore?”

That was the impulse behind a decade-old program run by the Brattleboro Community Justice Center, known as Justice Alternatives. When issuing a citation for a low-level offense like shoplifting, an officer can also write a referral form for the program. If the person opts in and completes the requirements, the charges aren’t filed.

In meetings with community members, offenders take responsibility and talk through how their actions harmed others. That can mean hearing from them directly; store employees have come to meetings to talk about the problem of retail theft, said Jackie Trepanier, who oversees the program for the justice center. She estimated the center fields 30-40 referrals per year, supplementing the well-developed set of diversion programs that Vermont operates at the prosecutor level.

“Because of the consequences of having a charge on your record, people are super grateful for the opportunity, not just to not have a criminal record but also to address this thing they did in a way that helps them move forward just as much as anybody else,” she said.

Even if a charge is later dismissed, an arrest itself can have consequences, as a group of scholars noted in “The Power to Arrest,” a 2019 review of the literature on police decision-making and arrest alternatives.

That can include one’s name becoming public in a police log, the psychological toll of being handcuffed and transported, time spent in a holding cell and financial costs. In New Hampshire, for instance, it costs $40 to see a bail commissioner who can grant release soon after an arrest. In addition, some landlords or social service providers may rely on arrest records for background checks.

“For many individuals, the most severe and long-lasting costs of an arrest do not come from conviction or formal punishment, but the myriad of collateral consequences in their personal, public, and professional worlds,” the authors— eight researchers affiliated with the University of Cincinnati and the John F. Finn Institute for Public Safety in Albany, N.Y.— wrote.

That makes pre-arrest diversion an attractive idea with a sound basis in theory, they wrote, though empirical research on how such programs play out in practice is limited.

One well-known version— called LEAD, for “law enforcement-assisted diversion”— originated about a decade ago in Seattle as a way to deal with people who were arrested repeatedly for drug possession or prostitution.

Instead of arresting those people, officers could refer them promptly to case managers who could work with them on immediate needs like housing, drug treatment, transportation or job assistance. Unlike in many diversion programs, the charge is immediately dropped.

An early analysis by University of Washington researchers found LEAD participants were less likely to be re-arrested than a control group and their housing situations seemed to improve — though the authors cautioned that the results could be different elsewhere, depending on an area’s population and resources.

Other police departments have adopted versions of LEAD, including Farmington and Dover in New Hampshire, in partnership with a local addiction-recovery organization. As of late 2020, about two years in, the two towns had diverted about 20 people, police officials said.

Because of their reliance on officers’ discretion, police diversion programs are susceptible to certain pitfalls, experts say.

Street-level decisions occur with little public scrutiny. When officers have total discretion over who to divert, that can raise concerns about unconscious bias, as well as missing the target population. An evaluation of the first year of a LEAD program in Albany, N.Y., found that officers diverted only 43 people and mostly failed to include the criminal justice system’s “frequent fliers,” for whom the program was designed.

Rank-and-file officers have to buy in, or the program will be rarely used. And who gets diverted can depend on which officer happens to respond. In a study of one unnamed department in the western U.S., officers’ general beliefs on rehabilitation and what shapes human behavior correlated with their self-reported likelihood of using LEAD.

Another potential concern is what scholars call “net widening,” an unintended expansion of the criminal justice system’s reach. That could happen if police officers use diversion for people they would otherwise have dealt with informally — like the women in the Stop & Shop.

The “Power to Arrest” authors recommend that diversion programs be used only for those who would otherwise be charged and not replace the various other techniques that police have traditionally used to resolve situations, from verbal warnings to calling a family member to pick someone up.

Lima, the Somerset officer, has learned in his seven years on the force that no two calls are the same.

“I wouldn’t say that, at this point in my career, I have like a default assessment of basically anything,” he said. “Because some of the things that happen are just so out of the realm of logical explanation sometimes.”

This reporting was supported by a grant from the nonprofit Solutions Journalism Network. The Sentinel retained editorial control.

BRATTLEBORO, Vt. — Detective Joshua Lynde and his team were cruising down Putney Road one morning in October when they saw the guy.

How would you describe your outlook on winter weather this year? Click the image below to answer

Check your email for details.

Submitting this form below will send a message to your email with a link to change your password.

An email message containing instructions on how to reset your password has been sent to the e-mail address listed on your account.

Thank you. Your purchase was successful.

A receipt was sent to your email.

This offer is currently unavailable.