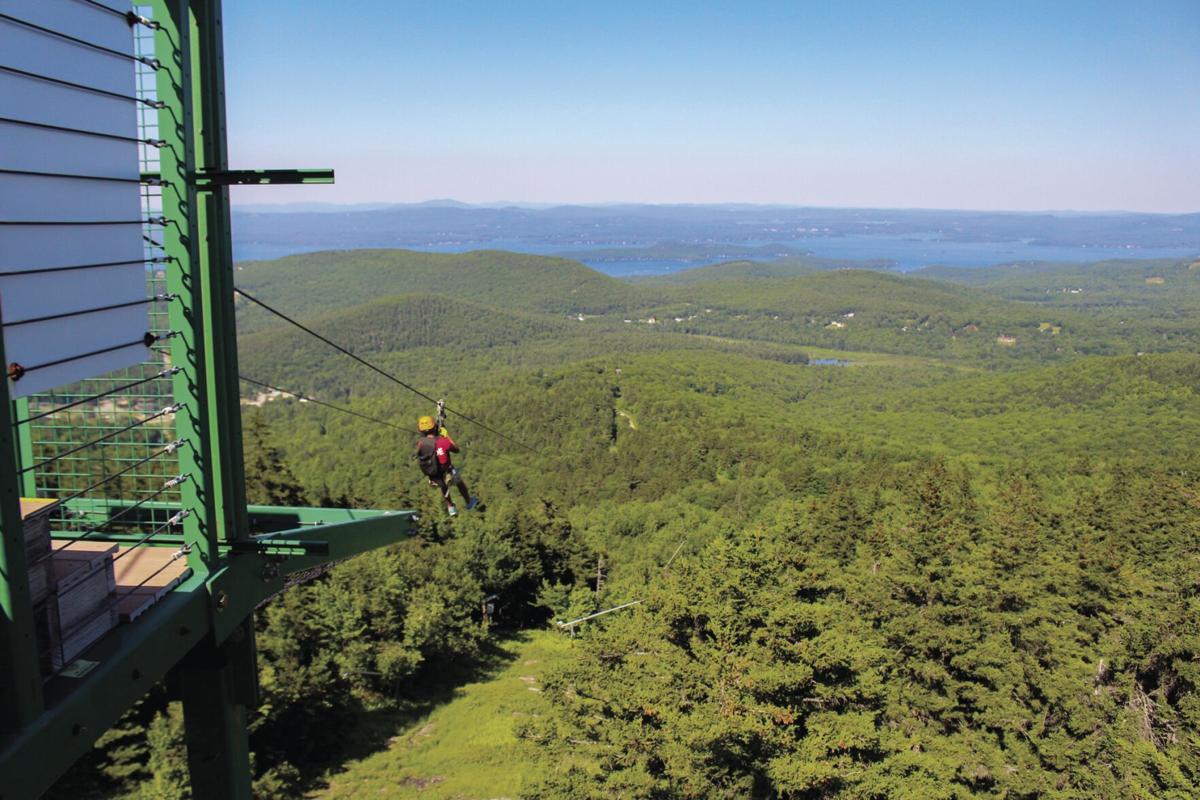 You can’t beat the view from the start of the zipline at the Gunstock Mountain Resort, which offers an above-the-treetops vista of Lake Winnipesaukee and mountains beyond. (Courtesy photo) 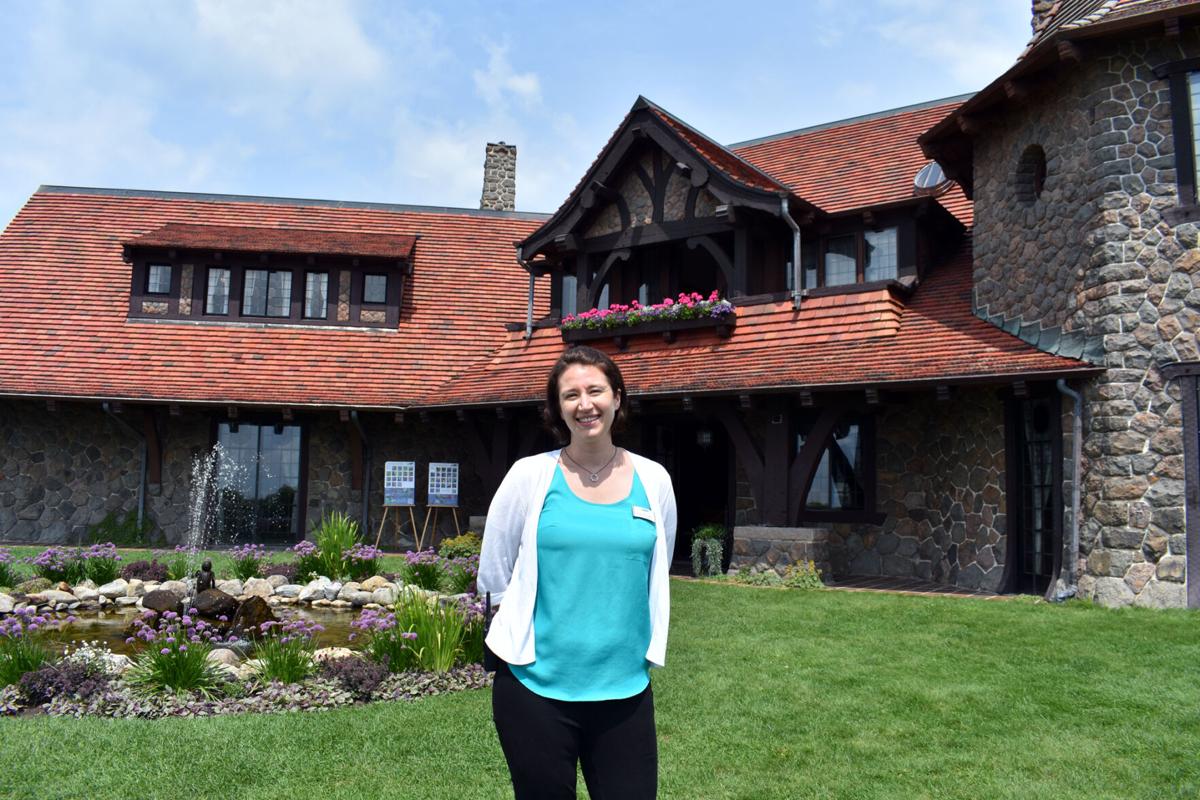 Robin Sherman, curator and museum manager at The Castle in the Clouds, said, "It's hard to have a bad day up here." (Adam Drapcho/The Laconia Daily Sun photo) 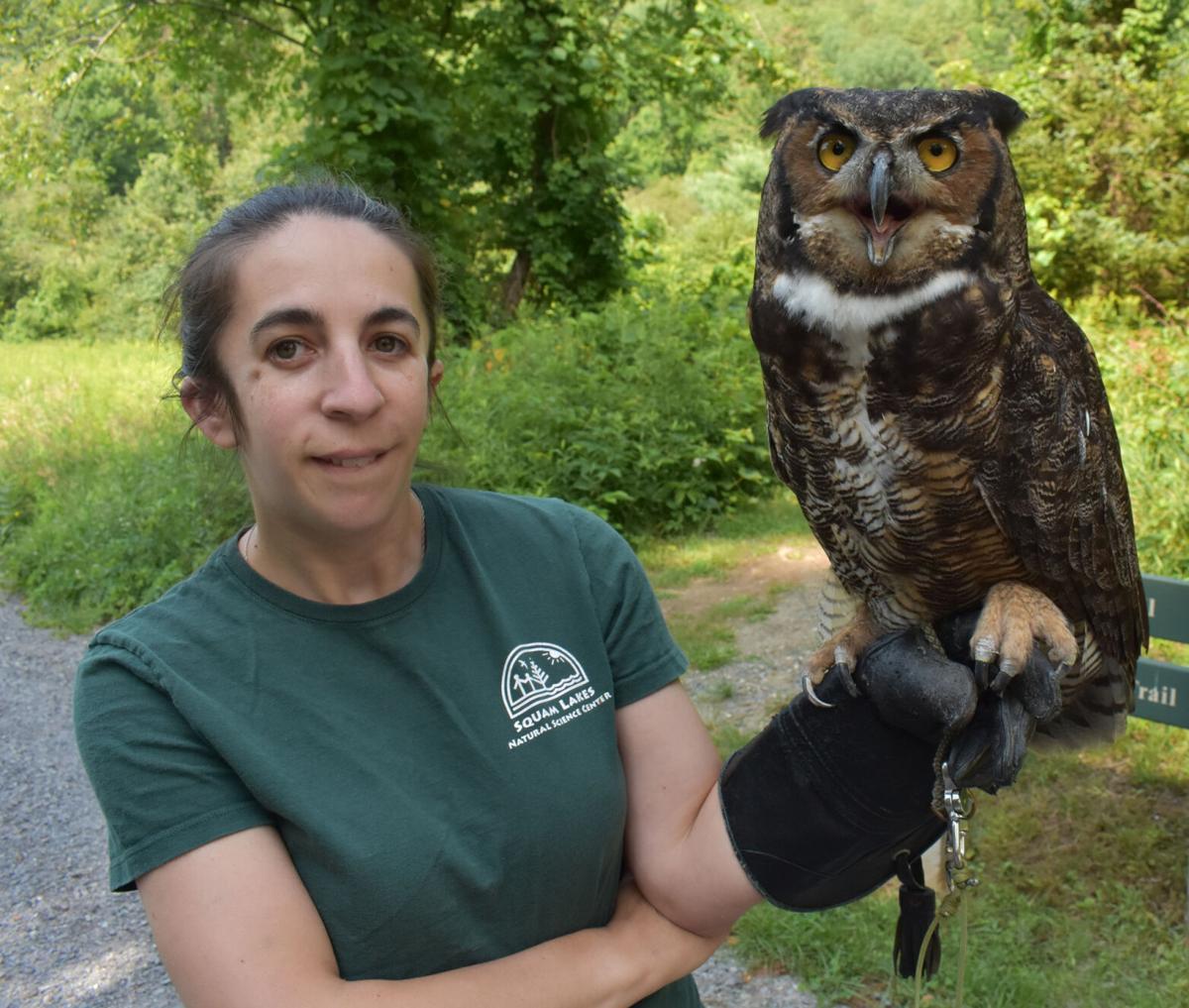 Lauren Moulis, animal care manager at Squam Lakes Natural Science Center, holds a female great horned owl. All of the animals who live at the center are there because they, for one reason or another, wouldn't survive in the wild. (Adam Drapcho/The Laconia Daily Sun photo)

You can’t beat the view from the start of the zipline at the Gunstock Mountain Resort, which offers an above-the-treetops vista of Lake Winnipesaukee and mountains beyond. (Courtesy photo)

Robin Sherman, curator and museum manager at The Castle in the Clouds, said, "It's hard to have a bad day up here." (Adam Drapcho/The Laconia Daily Sun photo)

Lauren Moulis, animal care manager at Squam Lakes Natural Science Center, holds a female great horned owl. All of the animals who live at the center are there because they, for one reason or another, wouldn't survive in the wild. (Adam Drapcho/The Laconia Daily Sun photo)

Among the Lakes Region’s charms are attractions that offer unique ways to spend a summer day while vacationing. They keep tourists coming back, and for some local residents they provide a source of employment that is anything but a run-of-the-mill job.

Lauren Moulis said she was looking for a place to volunteer while studying environmental biology at Plymouth State University, and her choices were the humane society or the Squam Lakes Natural Science Center in Holderness. She chose the latter because, “Here, I couldn’t take the animals home with me.”

That was about 13 years ago. Today she’s the animal care manager in charge of the four-person team that cares for the 80+ animals on exhibit or otherwise living at the center.

Her day starts early, serving breakfast to the animals that eat in the morning, then setting up the animals that will be handled by a staff person or volunteer while they interact with the public. After that the crew cleans out the daytime habitats for the animals on the exhibit trail and, finally, the animals are released them from their night-time quarters.

The curveballs are often of the veterinary variety. “A lot of our animals right now are on the older side," she said, "so they are all being treated for something.”

The two resident mountain lions, who have lived at the Science Center since they were three months old, are now elderly 18-year-olds who don’t always cooperate with the center’s schedule. “They’re not fans of getting up,” Moulis said. The entrance to their daytime habitat is opened in the morning, but the lions don’t usually saunter in until after noon. “Try telling 18-year-old big cats when to wake up in the morning,” Moulis suggested.

Moulis tends to gravitate toward the mammals, especially those she called “misunderstood.” There’s an opossum at the center right now, and there’s a male coyote that she can take out for walks – but only when he’s in the mood. “There are days when he’s like, ‘It’s not going to happen today,’” she said.

She said she doesn’t feel threatened or endangered by the animals, though, “I definitely give them all a healthy dose of respect.” Even though many of the animals have been there for many years, they’re still wild at heart and it’s a mistake to assume they’re friendly. That is, except for one of the deer, who is so friendly that it can become problematic.

She said her job is “definitely rewarding,” particularly when they rehabilitate an injured animal to the point where it can be released back into the wild. But, she said, as much as she loves working with animals, it’s the humans that have kept her in the job.

“The staff is just wonderful, it’s like a large family,” she said. “Everybody tries to help each other, no matter what.”

Speaking of families, part of Robin Sherman's job is to look after the one that built The Castle in the Clouds in Moultonborough.

Sherman, who grew up in the Mount Washington Valley, said she remembers visiting The Castle as a girl, so it’s “really special” to be able to work there as an adult. She’s the curator and museum manager at The Castle, the 1913 mountaintop estate of Thomas and Olive Plant. Plant, who was a millionaire shoe maker, had his mansion constructed in the arts and crafts architectural style, and filled it with curious and state-of-the-art amenities.

The property is now managed by the Castle Preservation Society, which operates with a museum’s dedication to historic accuracy. However, previous management ran the property as any other tourist attraction, and they didn’t always let facts stand in the way of a good story.

Part of Sherman’s task is to fact-check the legends of the property and the Plants.

“One of the stories we heard was that Tom lost a lot of money in Russian bonds,” Sherman said. The story was that he invested in Russian government bonds, thinking it was a safe way to store his fortune, but that the Bolshevik Revolution made those bonds worthless. Sounds too good to be true, right? That’s what Sherman suspected, until they found a document out of probate court. “Come to find out, he had bought Russian bonds, and they weren’t worth anything after the revolution,” she said.

Another story went that the Plants lost another chunk of their fortune by investing in the Cuban sugar crop in a year when the crop failed. “That’s one of the stories we haven’t been able to prove yet,” Sherman said.

Then there are tales that appear apocryphal. An octagonal guest bedroom was often called “Teddy’s room” because it was supposedly used by President Roosevelt.

“We’ve done all sorts of research, we reached out to the Roosevelt Library,” Sherman said. “We can’t find any connection between Roosevelt and Plant.” In addition to a lack of any correspondence or record of an affiliation, Roosevelt’s health was already in decline by the time the house was built, making a social visit to New Hampshire unlikely.

Sherman starts her day by coming in early and walking through the house to make sure everything is in place before guests arrive. She then splits her time between the museum floor, to interact with interpreters and visitors, and in her office, where she catalogs artifacts, works on programming, and manages the ongoing renovation and preservation of the site. And, of course, trying to uncover new details about the unique property and its one-time residents.

“Probably the most difficult thing about my job is we have a dearth of information about Tom and Olive Plant,” Sherman said. The property was used by another family after the Plants, and subsequent users likely didn’t see any need to keep the prior homeowners’ documents around. It’s a challenge, she said, “but also, it’s fun. I have always loved research.

Sherman said she loves to share the story of the Plants with visitors. “We especially love it when kids come through and ask those deep questions. It makes us feel that they are going to be good stewards of properties like this.”

She and the rest of the staff share a passion for preserving the property, telling its story, and making both accessible to the public. “Tom (Plant) said that the house was built to stand for centuries, that’s our goal,” Sherman said.

A zipline sounds fun, right? But when you climb up a 60-foot tower and look out to the other end of the cable  – which is attached to a distant platform so small it looks like a speck – you might have second thoughts about stepping off the edge.

Sara Caveney is the adventure park manager at Gunstock Mountain Resort, which has an aerial adventure course and a series of ziplines that cover 1.6 miles. Her job is to make sure that everyone who comes to Gunstock for a day of fun achieves that goal.

The aerial adventure course gives people the chance to tackle challenges placed among the treetops. Sure, they’re way up in the air when they navigate the course, Caveney said, but they’re still in charge. Their hands and feet are keeping them on the course – with a safety harness on, of course. That changes when they move to the zipline.

“The days that I’m working on a zipline platform, I am helping customers to conquer a fear that they didn’t expect to have,” Caveney said. “Some people think that they’re not afraid of heights, and then they get up there and they’re terrified.”

First there’s the climb, a spiral metal staircase up to a platform so high that it sways a bit in the wind. Then they get hooked up to the cable and the gate is opened, revealing a whole lot of open space – nearly 4,000 feet, on one of the stretches – between them and the next platform. And, unlike the aerial adventure course, the zipline riders don’t step or hang on to anything, they just have to put their trust in the equipment.

Caveney said nearly half of all zipliners will experience sudden nervousness when they get up to the platform, and some of those people will start listening to an inner voice telling them to back out. It’s the job of the adventure park staff person to silence that voice.

“It’s fun, but it is challenging to find the right tactic and words to reassure them that they’ll be okay and have fun, and won’t back out of what they want to do,” she said. She starts by saying how safe the equipment is, how it gets inspected daily. If that still doesn’t do it, she might play a little trick. Once their weight is on the cable, the only thing stopping them from zipping off the platform is a brake, which is released by the rider pulling down on a handle – they can release the handle to slow or even stop themselves. She sometimes says, “Can you pull on that handle for me,” and the recalcitrant rider is ziplining before they realize it.

“I think zipline guides have a level of patience that most people wouldn’t think they have. We could be qualified as minor therapists,” Caveney said. “Sometimes I feel like saying, ‘... and how does this height make you feel.’”

Even the platform attendant might feel a little squeamish from time to time. Caveney remembers the way she felt when she first tried the zipline.

“It was totally intimidating,” she said. “I have a little bit of fear of heights in me, too,” she said, adding that she’s able to keep it “tucked away” while on the job.

Working a zipline platform isn’t a bad gig, she said. A great day for her involves “working a platform on a nice day, and having lots of happy customers come through and have fun – and not bail out on the zipline.”