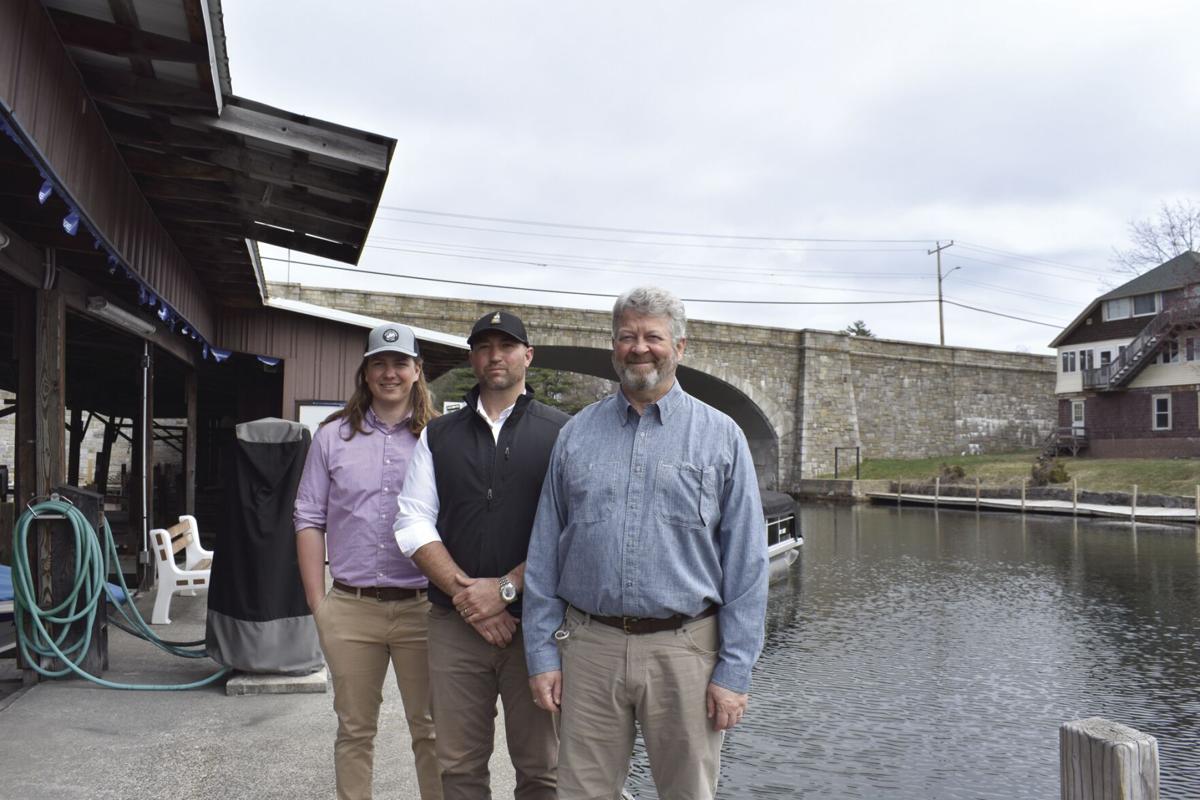 From left: Alex Conrad, John Thurston and, the new owner of Thurston's Marina, Bob Conrad. The business will be known as North Water Marine after the change of ownership. (Adam Drapcho/The Laconia Daily Sun photo) 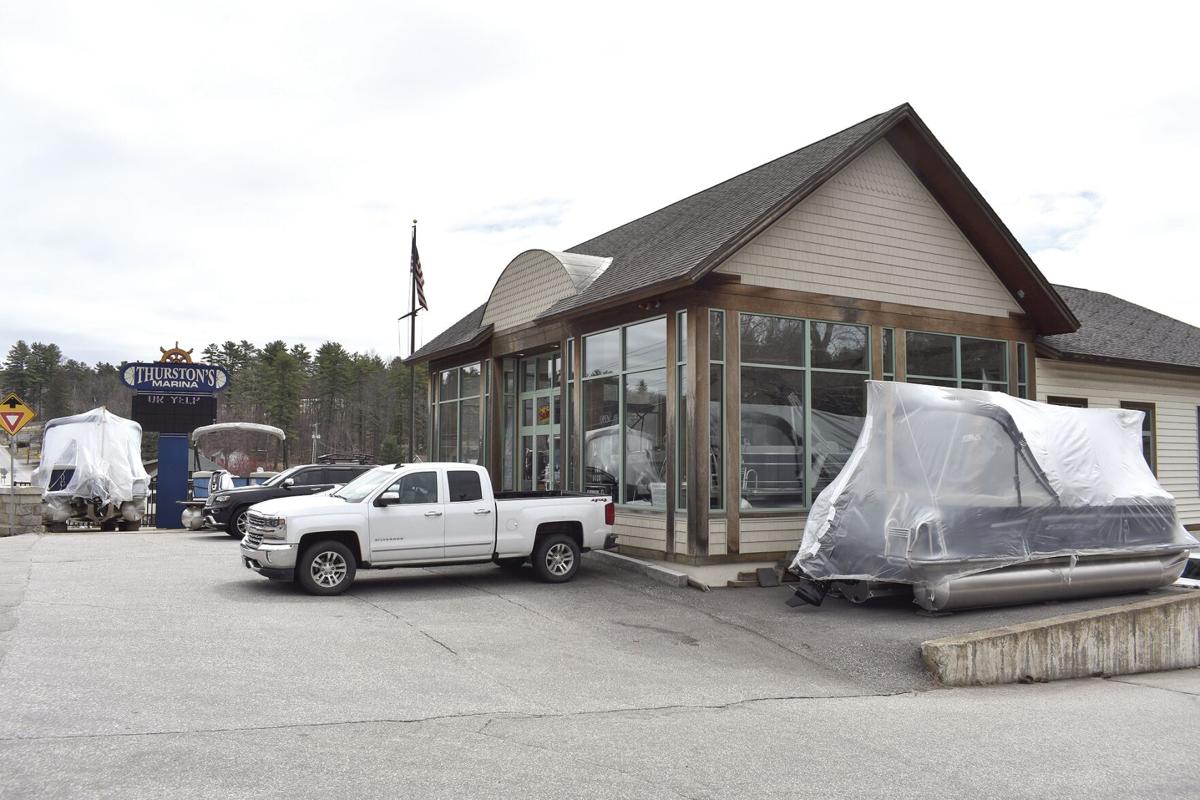 Thurston's Marina was founded in 1972 by Don A. Thurston, and operated by his four sons until it was sold earlier this month. (Adam Drapcho/The Laconia Daily Sun photo)

From left: Alex Conrad, John Thurston and, the new owner of Thurston's Marina, Bob Conrad. The business will be known as North Water Marine after the change of ownership. (Adam Drapcho/The Laconia Daily Sun photo)

Thurston's Marina was founded in 1972 by Don A. Thurston, and operated by his four sons until it was sold earlier this month. (Adam Drapcho/The Laconia Daily Sun photo)

LACONIA — For nearly a half-century, the words “Thurston’s Marina” have greeted motorists crossing the Channel Bridge on their way to Weirs Beach. This summer, those words will be changing, as the marina has been sold.

North Water Marine, now owned by a family from Wolfeboro, has plans to expand the business, though the new owners say the faces of employees and the atmosphere in the marina will remain familiar to customers.

The marina sale was closed last week, with the family-owned marina sold to Bob Conrad. Conrad retired in 2019 to move full-time to his lakeside home in Wolfeboro.

“I got the itch to do something more,” Conrad explained. Then, last year, his son Alex joined him in Wolfeboro to ride out the pandemic. After spending a year on Lake Winnipesaukee, Alex decided that he didn’t want to return to the big city life in Boston, nor to his big city job. Alex, who spent his summers as a teenager working for marinas, will serve as the dock manager.

Thurston’s Marina was founded in 1972 by Don A. Thurston. Until last week, it was run by his four sons: Don, Mark, Jeff and Bruce. Those brothers are all retired now, but a member of the next generation of the Thurston family, Jonathan, will stay on as the general manager for North Water Marine.

The sale was recorded with the Belknap County Registry of Deeds on April 6. The county collected $50,468 in transfer fees. The parties to the sale did not discuss the final sale price, which would have included both real estate and business considerations.

Jonathan’s commitment to the marina’s future was critical to the sale, Bob Conrad said, since Thurston’s is a larger marina than they initially had in mind.

The property covers some seven acres over multiple lots, with buildings for storage, sales and service. The new ownership plans to maintain all of the same services, provided by almost all of the same staff, as before — but with a few areas of expansion.

New boat sales exploded during the coronavirus pandemic, and it wasn’t restricted to 2020. As Conrad noted, the Thurstons ordered twice as many boats for 2021 as they sold last year, and every one of those new boats is spoken for.

Even without new boats to sell for a while, North Water Marine is going to find ways to get more people out on the water. They are going to double and diversify their rental fleet, and are adding valet boat service this year — a service model where a customer’s boat is stored on dry land when not in use. Then, when the customer wants to use the boat, it will be in the water and waiting for them.

North Water Marine will start their valet program with space for 50 boats, with an eye to expand to 100 as the summer progresses. That will necessitate a growth in staff, especially seasonal positions. “With more boats, we’ll need more people to move them around,” Alex Conrad said.

The Conrads, bringing a fresh perspective, see opportunities for the built landscape at the marina.

“One is observing that the Thurstons have been here for decades, 49 years, we want to improve some of the facilities,” Bob said. One of their service buildings, which sits right on the channel, will eventually be repurposed to include a lounge and retail space for customers to wait while their boats — rental or valet — are being prepared.

“We want to totally refresh the customer experience,” Bob said. That includes the adoption of some 21st century technology, especially web-based and mobile technology applications that will allow customers to have their boat rental, or valet service, reserved with the push of a button or tap of a phone screen.

Despite all of the changes planned, Bob Conrad said he doesn’t intend to change the people that have defined the customer base for the marina. “As Thurston’s has always been, we intend to be a family marina,” he said. “We’ll be doing the things that families need.”

The sudden boost in boating might have been provoked by the pandemic, but the North Water Marine leadership team thinks that water-based recreation will continue to compel families even after the virus has subsided.

Jonathan Thurston said the pandemic has pushed people to turn their interest inward, “focusing on their families, having that family time and enjoying beautiful days and this lake that we’re lucky enough to be on.”

Taking on the role of dock manager has reminded Alex of his days as a dockhand, when the goal of his job was helping people have the best day of their week. That goes for people new to boating, too, he said. “We’ll take them out and make sure they’re comfortable doing it . . . At the end of the day, everybody’s here to have fun. If we can be a small part of that, that’s what I like to do.”

LACONIA — Just over a year ago Tom Boucher, owner of T-Bones and Cactus Jack's, called a member of his senior management team, after noticing …