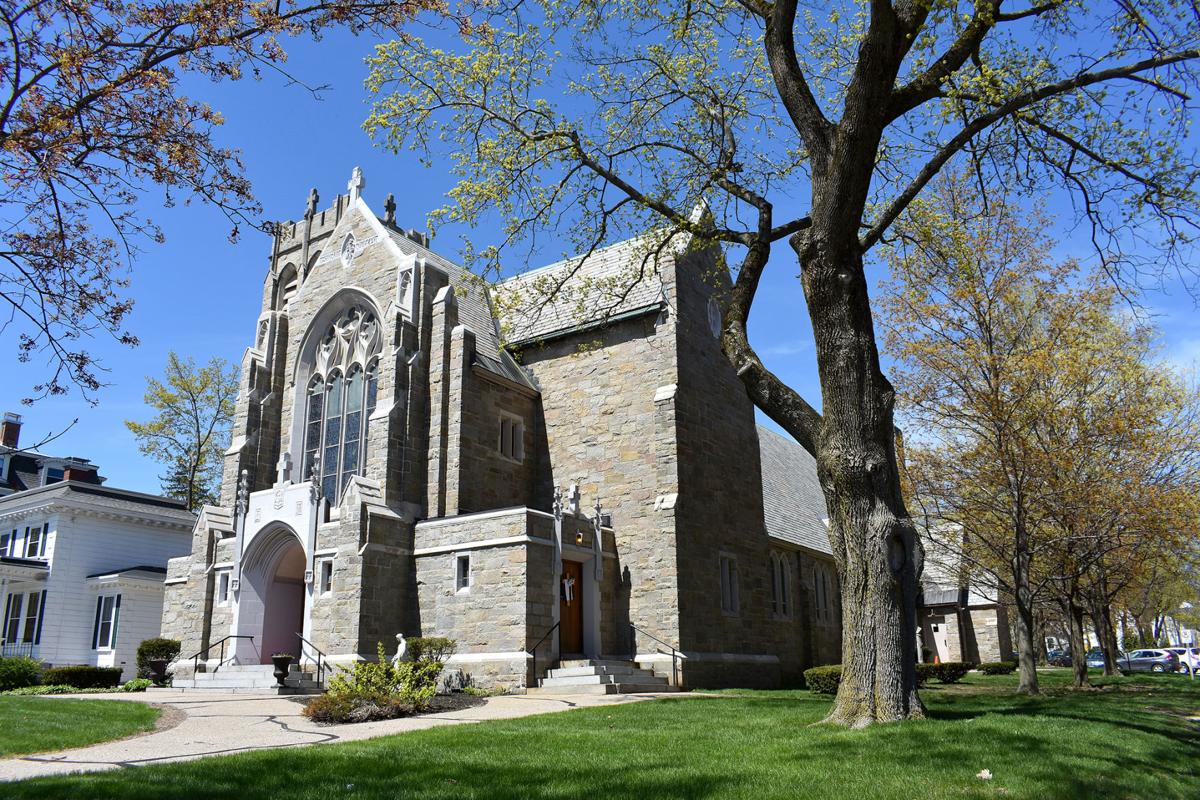 The Diocese of Manchester has announced that the agreement to sell St. Joseph Church in Laconia has been terminated. (Adam Drapcho/The Laconia Daily Sun file) 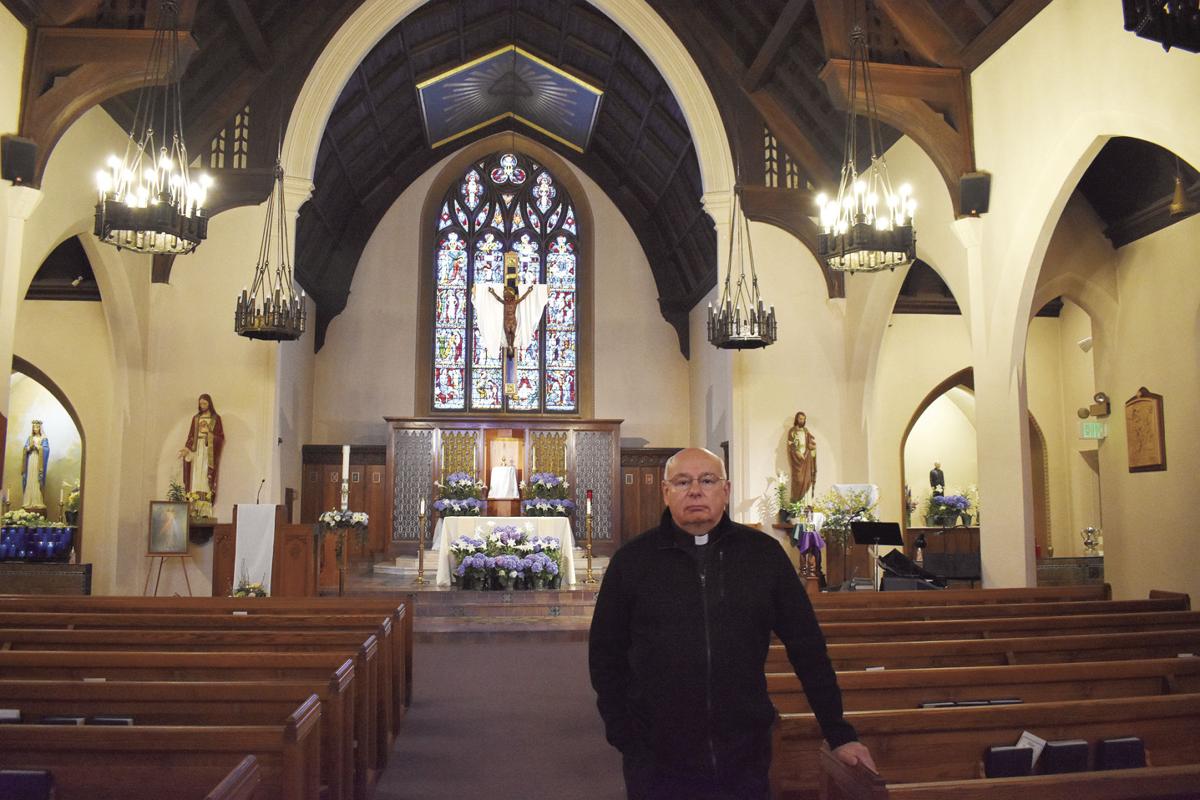 The Rev. Marc Drouin, the head of the St. Andre Bessette Parish, said he was disappointed that the sale of St. Joseph Church has been called off, but grateful that the building will remain. (Adam Drapcho/The Laconia Daily Sun)

The Diocese of Manchester has announced that the agreement to sell St. Joseph Church in Laconia has been terminated. (Adam Drapcho/The Laconia Daily Sun file)

The Rev. Marc Drouin, the head of the St. Andre Bessette Parish, said he was disappointed that the sale of St. Joseph Church has been called off, but grateful that the building will remain. (Adam Drapcho/The Laconia Daily Sun)

LACONIA — After two months of public outcry over plans to demolish Saint Joseph Church and sell the real estate it occupies, the Diocese of Manchester announced on Monday that the proposed sale had been called off. Those who worked to oppose the destruction of the circa-1929 church celebrated the news.

“Saint Andre Bessette Parish, the Diocese of Manchester, and the potential buyers of the Saint Joseph property have mutually agreed to terminate the Purchase and Sale Agreement first announced in early May,” a statement from the diocese announced.

The statement suggested that the downtown property, which contains two other buildings in addition to Saint Joseph Church, could be subdivided into three parcels, so that the other two could be sold without “infringement on the church… Representatives of the parish and the Diocesan Offices are planning to meet with city officials to discuss such a subdivision and to work out any zoning issues that might possibly arise. We remain hopeful that such a solution will allow the church edifice to remain.”

“Hallelujah!” cried Linda Normandin, a parishioner of Saint Andre Bessette Parish, who had filed an appeal to the Vatican in opposition to the planned demolition.

“It’s wonderful news. We hope now that the diocese will talk to us about letting us take over the church… Let us take the burden off the parish’s plate.”

The Saint Andre Bessette Parish had announced in January 2017 plans to consolidate its activities onto the Sacred Heart Parish campus. Still, it came as a shock to many when the Rev. Marc Drouin announced on May 5 that the diocese had negotiated a sale of the property at the corner of Church and Messer streets, which includes Saint Joseph Church, the Holy Trinity School building and the historic Busiel House. Further, the announcement was made that the church would be demolished this summer before the transaction would be finalized.

Public reaction to the announcement was vigorous and lopsided, with many people, Catholics and non-Catholics, Laconia residents as well as people living hundreds of miles away, critical of the diocese’s insistence that the church must be demolished. The parish could divest itself of the real estate, critics argued, without demolishing what is considered one of Laconia’s most attractive buildings.

A dual-pronged strategy soon took form. The first was to form a Historic District to include the church as well as some of the downtown’s other landmark structures, which would prevent their demolition. However, the diocese submitted an application for demolition before the Historic District could be adopted by City Hall, leaving the city virtually without recourse to prevent the razing of the church.

Tara Shore, who is continuing to push for a historic district, said she was “dancing on the clouds” after hearing the news. “It makes me think of my most favorite quote in the whole world, by Margaret Mead, ‘Never doubt that a small group of thoughtful, committed citizens can change the world; indeed, it’s the only thing that ever has.’”

Shore said she was grateful to Bishop Peter Libasci and the Diocese of Manchester for reflecting on the initial decision and considering alternatives. “Thank you for taking the time to do that,” she said. “I’m looking forward to the fact that conversations are taking place on how we can use this beautiful building in ways that work for everybody.”

Andrew Hosmer was active in the second prong of the strategy, to form a nonprofit organization that would assume financial responsibility for the church, which would be operated as a Catholic chapel.

“I am particularly proud of all the people in the community that stepped up and used their powerful voices to say that this church was worth saving,” Hosmer said. “But for the people like Linda Normandin, Bob Smith, Tara Shore, Jane Whitehead, it’s the power of a unified voice. It’s spectacular to see it have these results.” Hosmer added, “I am also very appreciative that the Diocese of Manchester listened to our concerns and responded to them in this way.”

Bob Smith, one of the donors who has indicated financial support for the proposed nonprofit, said, “We are pleased that the bishop is considering saving the church building, and that he now plans to work with the city to that end.”

The sale of the real estate was a great financial opportunity for the parish, said Drouin, so from that angle, he said, “I’m sorry to see the sale fall through. However, I am grateful for the opportunity to start with a clean slate and that the building will remain.”

A spokesman for the diocese said that while the demolition permit has not been rescinded, their real estate agent has asked the city to delay discussion of the permit – which was to have taken place this week – to September.

That permit would have been considered by the city’s Heritage Commission, which would have been able to delay, but not outright deny, demolition of the church. Jane Whitehead, chairwoman of the commission, said she would feel better if the diocese pulled its application for demolition.

Whitehead said reaction to the proposed demolition showed how significant the Saint Joseph Church building is to the city.

“I think it’s on many levels. First of all, it’s a beautiful church, particularly the interior is very beautiful, with its stained glass windows. It’s an important part of the landscape of downtown,” Whitehead said, and its potential loss reminded Laconians of the many historic structures that were lost during the city’s Urban Renewal project. “It’s important also historically, because it was built by Irish immigrants during the depression, so it’s an important historical document for the town. It’s important for the fact that people from all over have expressed their dismay, not just Catholics, not just Laconians, it has inspired love for many reasons.”

Mayor Ed Engler said he was just learning of the development on Monday afternoon. “I think it’s wonderful news for the city, I look forward to working with (the diocese).”