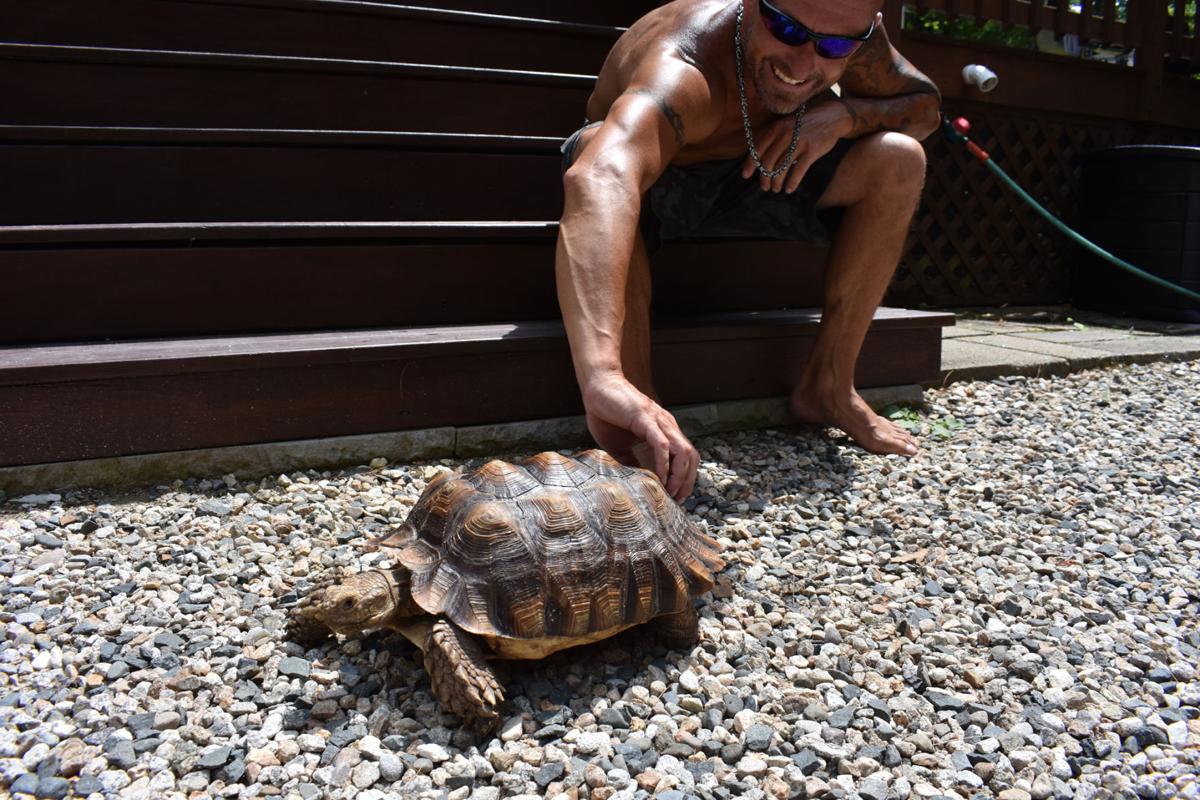 Danali wiggles as her owner, Derek Gill, scratches the back of her shell. Gill said he worried himself sick when African spurred tortoise went missing from his Moultonborough home. (Adam Drapcho/The Laconia Daily Sun photo) 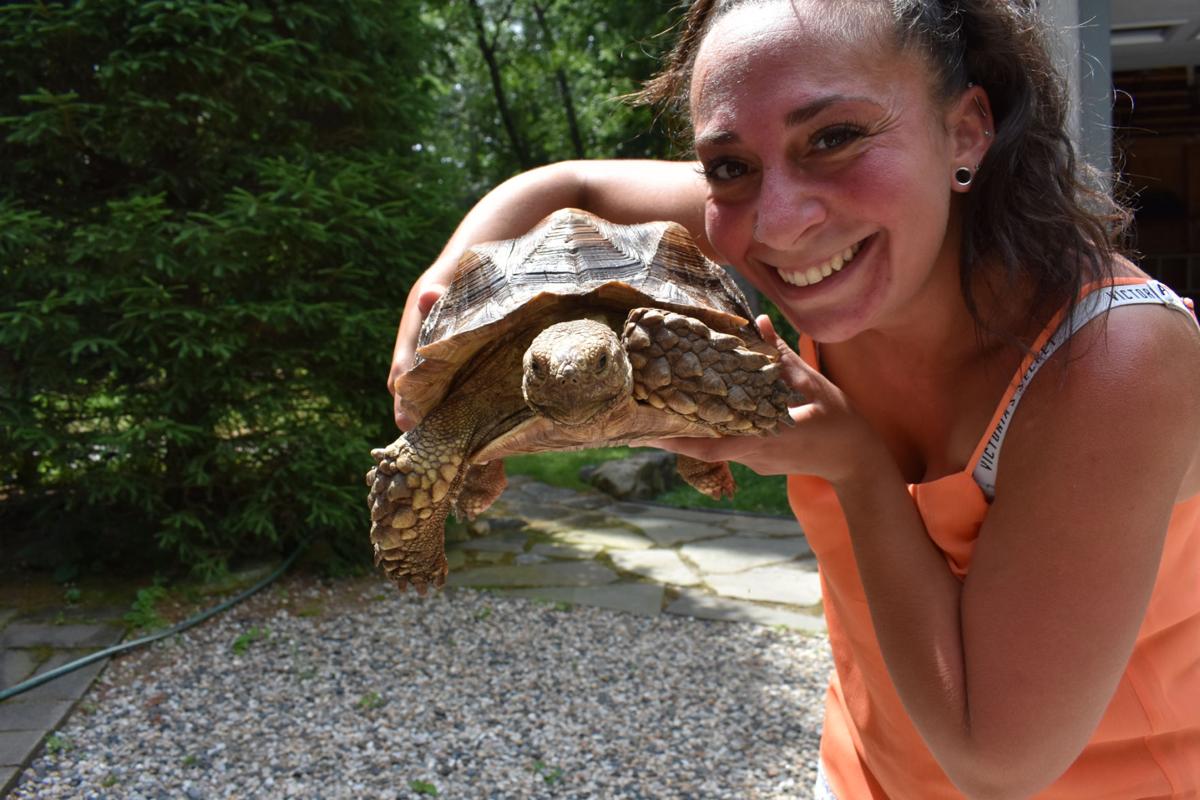 Stephanie Catanzato holds "Danali," a pet tortoise that had given her owners the slip for six days. (Adam Drapcho/The Laconia Daily Sun photo)

Danali wiggles as her owner, Derek Gill, scratches the back of her shell. Gill said he worried himself sick when African spurred tortoise went missing from his Moultonborough home. (Adam Drapcho/The Laconia Daily Sun photo)

Stephanie Catanzato holds "Danali," a pet tortoise that had given her owners the slip for six days. (Adam Drapcho/The Laconia Daily Sun photo)

MOULTONBOROUGH — Stephanie Catanzaro and Derek Gill moved to the Suissevale part of town on June 24, looking to start a quieter life together than the one they had known in Massachusetts. But one member of their household just couldn’t wait to meet the new neighbors.

Catanzaro and Gill’s idyllic new life turned into a nightmare on July 4 when “Danali,” Gill’s pet tortoise, ran off. For six days, they couldn’t sleep or concentrate on anything except finding their reptilian companion.

“We’re heartbroken,” Catanzaro said during a phone interview on the morning of Friday, July 10. She said that Gill, her boyfriend, had let Danali out into the backyard on July 4, and watched as his pet nibbled on grass. But soon they became distracted by tending to their new home and by people who stopped by to visit with the new neighbors. After a couple of hours, they realized that Danali was no longer in the yard, and their frantic search began.

They found out later that Danali had started to make friends with the neighbors, some of whom, not yet aware that she was an escaped pet, had snapped pictures of the distinctive and outgoing animal.

Catanzaro said they didn’t fear for Danali’s immediate safety. A 20-year-old African spurred tortoise, Danali is the size of a car’s steering wheel and has the ability to feed herself. “We think she’d be fine in the wild, we feed her mixed greens and lettuce, but her favorite food is strawberries,” Catanzaro said.

Danali has developed a distinctive personality. She has picked up some dog-like tendencies, Catanzaro said, such as wiggling her body when the rear of her shell is rubbed.

“It’s nothing out of the ordinary. Some people have dogs and cats, we chose to have turtles,” Catanzaro said.

For a few hours on July 4, the tortoise owners later determined, Danali was making appearances in neighborhood yards. The last one, though, was about 3 p.m. that day, and there weren’t any sightings for several days.

They tried to hold onto hope as they printed up fliers, contacted municipal agencies and animal organizations, and walked the wooded streets of their new home.

“I felt like Ace Ventura, Pet Detective,” Gill said, as he interviewed nieghbors and tried to track Danali’s path.

Trying to find her was like like looking for a “needle in a haystack,” Catanzaro said, as Danali’s shape and colorings made her perfectly camouflaged in a pine forest.

Then, early on the afternoon of July 10, Catanzaro called back – a neighbor more than a quarter-mile away had spotted Danali, and Gill was reunited with one of his oldest friends.

“I got the call at Aubuchon,” Gill said. “I just threw the stuff behind the counter and said, ‘I gotta go!’”

Gill said he has cared for Danali since the tortoise was the size of a quarter. His pet is still a spring chicken, as African spurred tortoises can grow to 200 pounds and can live past 70 years old.

He said he’s now thinking about getting a GPS tracker to affix to Danali, in case she gets another urge to explore.

“Thank you to everyone in Suissevale,” said Catanzaro, who said she doubted that her prior neighbors in the Commonwealth would have been as helpful.

LACONIA — As principal of Pleasant Street Elementary School, David Levesque receives a trickle of letters from children — and a bounty of feel…