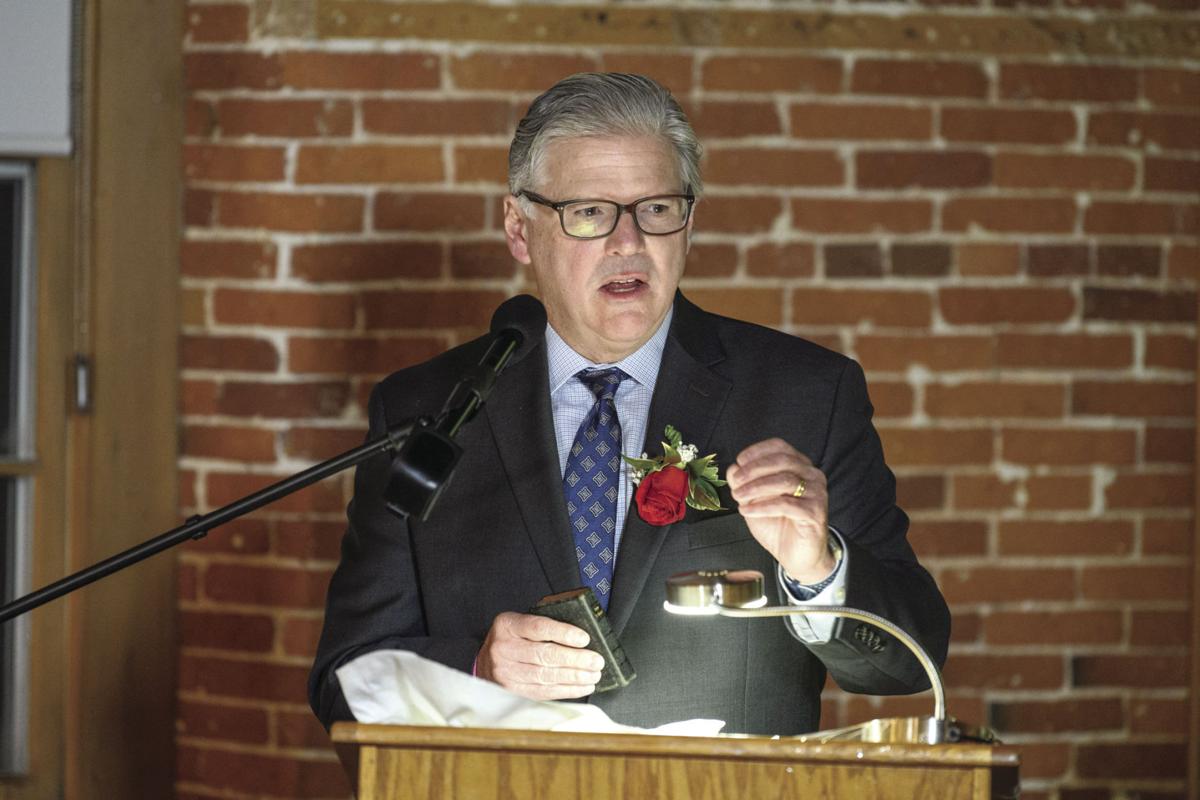 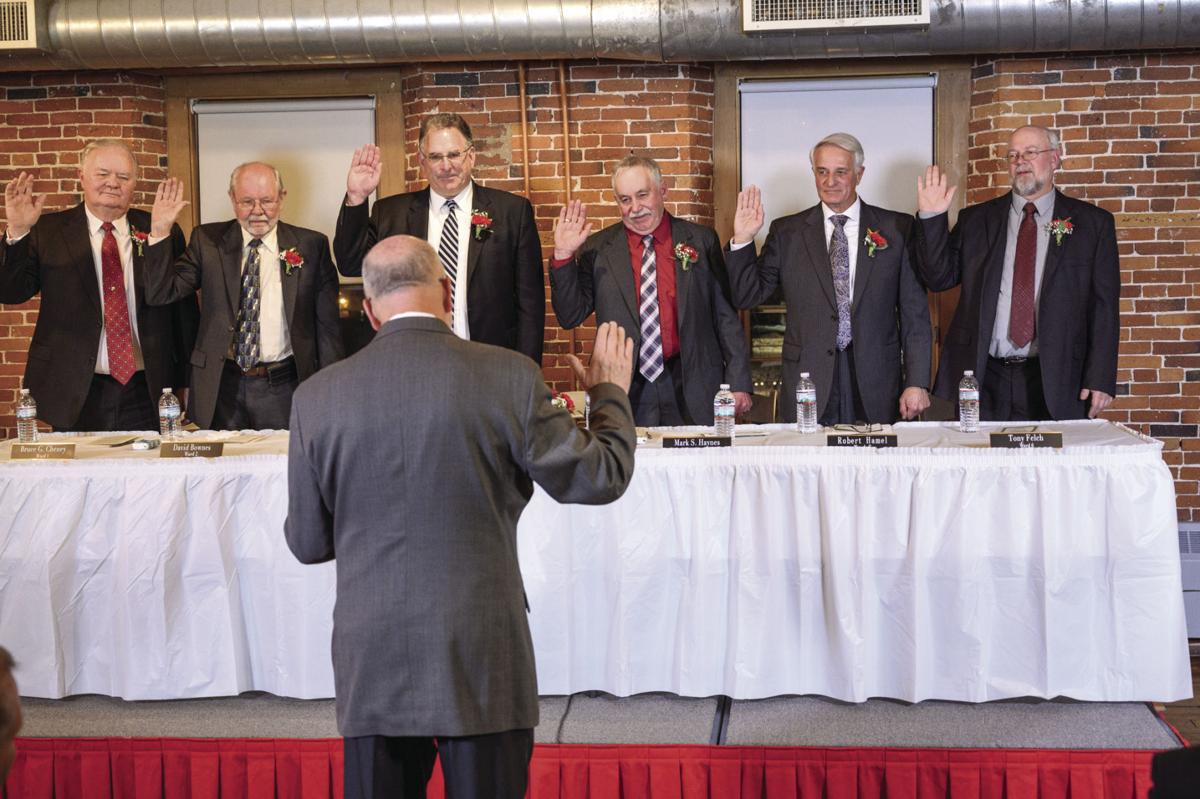 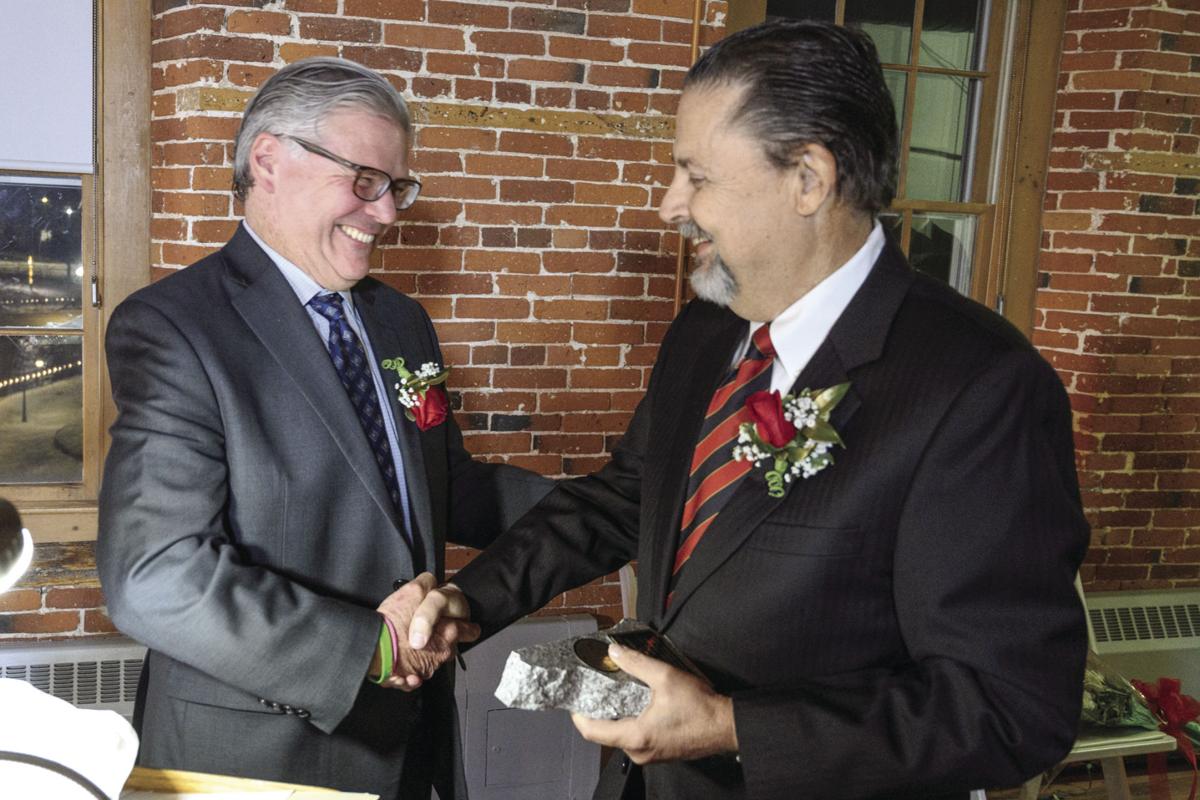 LACONIA — Optimism about the future and the willingness to take on challenges to spur growth were the overarching themes as Laconia inaugurated a new mayor and City Council.

A standing-room-only crowd packed the Belknap Mill’s Rose Chertok Gallery on Thursday evening as Andrew Hosmer was inaugurated as the city’s new mayor, succeeding Mayor Ed Engler, who stepped down after three terms.

“I believe passionately that a brighter and more prosperous future for the city of Laconia is within our grasp,” Hosmer said in his inaugural address. “I view Laconia as a city on the move. And it’s imperative that we maintain this forward momentum.

“Let’s be bold,” Hosmer urged his listeners. “Our city really can be as great as we want it to be. We need to see the potential and believe in the city’s potential and be willing to work together to realize that potential.”

Hosmer, who came on the City Council last May to fill a vacancy created by the death of longtime City Councilor Armand Bolduc, urged the audience to take pride in the city’s many assets. Among those he enumerated were teachers, firefighters, police officers, public works employees, its airport, Lakes Region Community College, and the business community, which he said was key to energizing the city’s economy.

“We should be proud of all of these aspects of our community,” he said.

He promised to continue the development initiatives that were begun during Engler’s tenure.

The Colonial Theatre restoration, the revitalization of Lakeport and efforts aimed at redeveloping the State School have the potential to transform the city, he said.

“These projects represent tens of millions of dollars being invested in our community, and when completed will usher in a fresh chapter in Laconia’s history. That will be a legacy we can all be proud of,” he said.

But beyond the economic development initiatives championed by Engler, Hosmer praised his predecessor for the constructive tone he set as he led the city for the past six years.

“My commitment to you is to continue Mayor Engler’s legacy of fostering civic engagement through civility,” he said. “We rarely learn from people we agree with. … Vigorous debate is an essential ingredient of our democracy and problem-solving,” he continued. “We are strongest when we are civil and when we are kind to one another.”

Like Engler, Hosmer said the city needs more housing targeted at middle-class families. To achieve that, he said, the city needs to continue investing in its school system.

In his farewell speech, Engler chose to forgo talking about what had been accomplished during the past six years, choosing, he said, “to let history largely be the judge of that.”

In a voice that was sometimes choked with emotion, Engler instead thanked those he had worked with, and he hoped the manner in which he handled himself while in office was in keeping with “the lofty standards or behaviors set by my predecessors.”

Like Hosmer, he also spoke about the future. He quoted from part of a letter he wrote last year which was placed in a time capsule to be opened in 2043, when Laconia will observe its sesquicentennial as a city.

“I wonder what the residents of Laconia in 2043 will think of the success or failure of initiatives we put in play in the short term,” he said, reading from the letter. “Will they judge us to have been blessed with great wisdom and foresight, or will they wonder what in the world we could have been thinking? Hopefully they won’t wonder why we did not act when the need for action was so obvious.”

He also spoke with gratitude as he reflected on the ordeals he endured during the past 2½ years while battling cancer.

“So many of you who are here tonight played key roles, directly or indirectly, in the amazing support system that has allowed me to reach this night,” he said.

Prior to Hosmer’s and Engler’s speeches, Ira Keltz, president of Temple B’nai Israel, urged Laconia to continue to be a community that values diversity and pluralism, and where all people can feel free to practice their faith and and show pride in their particular cultural background.

But tolerance is threatened by violence and hate speech, he said. He pointed to the killings of 11 people at a Pittsburgh synagogue in October 2018, and more recently by a series of attacks on Jews during the Christmas and Hanukkah holidays in New York. And there have been acts of violence directed at worshippers in churches and mosques, he noted.

“But do you know what’s scarier (then those attacks?),” he asked. “The lack of a strong response to the violence. We are not hearing our national or state leaders and representatives strongly speaking out against it. (By their silence) they’re saying it’s OK to target a religious group. In Laconia we are not immune to this,” he warned. “It’s only a matter of time before we are targeted. An attack on any American group is a threat to the pluralistic fabric of our nation. Anti-Semitism endangers everyone because the hate that initially targets Jews never ends with Jews.”

Others participating in Thursday’s inaugural were the Laconia Police Department Color Guard, Laconia High School senior Maya Minnick, who sang the national anthem, members of the Laconia Middle School Leadership Team who offered Engler a special thank you for his service to their group, the Rev. Gary Kosmowski, who offered the invocation and benediction, and Bob Champlin who served as master of ceremonies.

Editorial: Mayor right to tie Laconia's future to its schools

Laconia Mayor Andrew Hosmer hit the nail on the head in his inauguration speech last week, when he said, “As go Laconia schools, so goes Lacon…