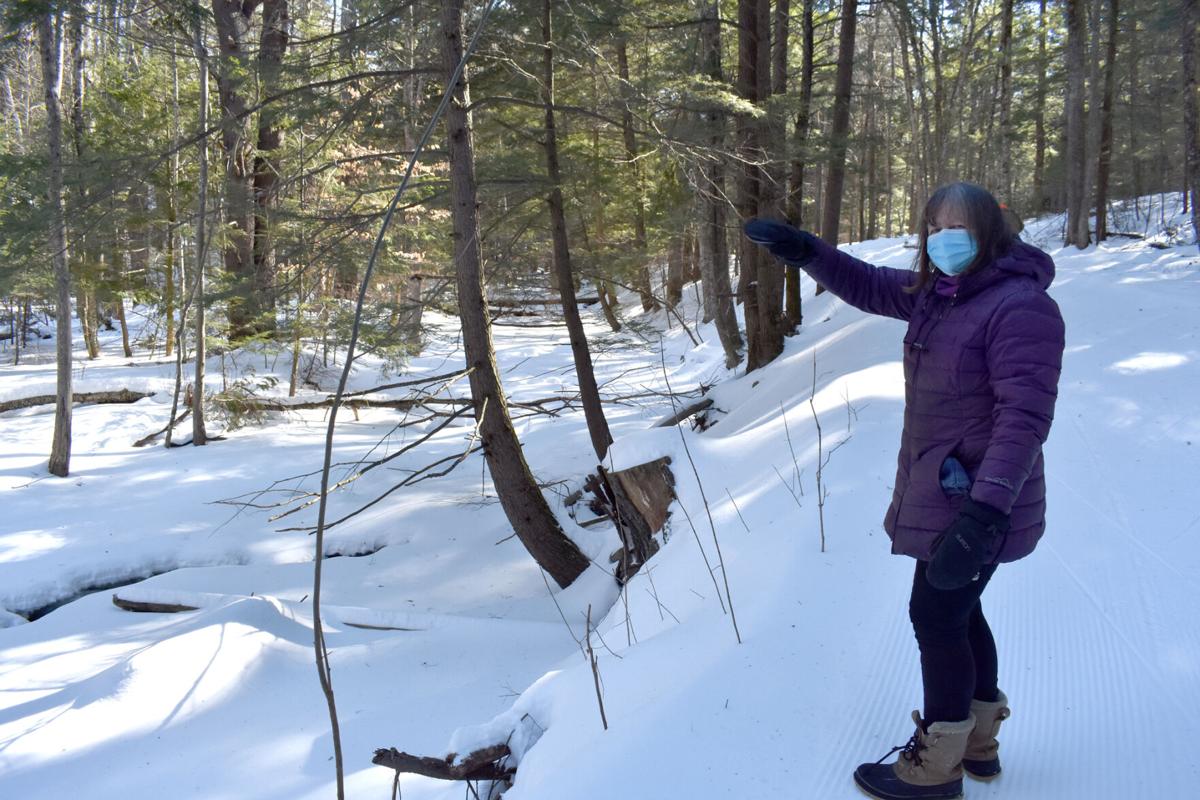 Donna Hepp, Belknap County Conservation District board member, gestures toward Poor Farm Brook as it passes through Gunstock in Gilford. A BCCD project cut trees and laid them across the brook, mimicing the effects of a windstorm, which has several benefits to the brook's vitality. (Adam Drapcho/The Laconia Daily Sun photo) 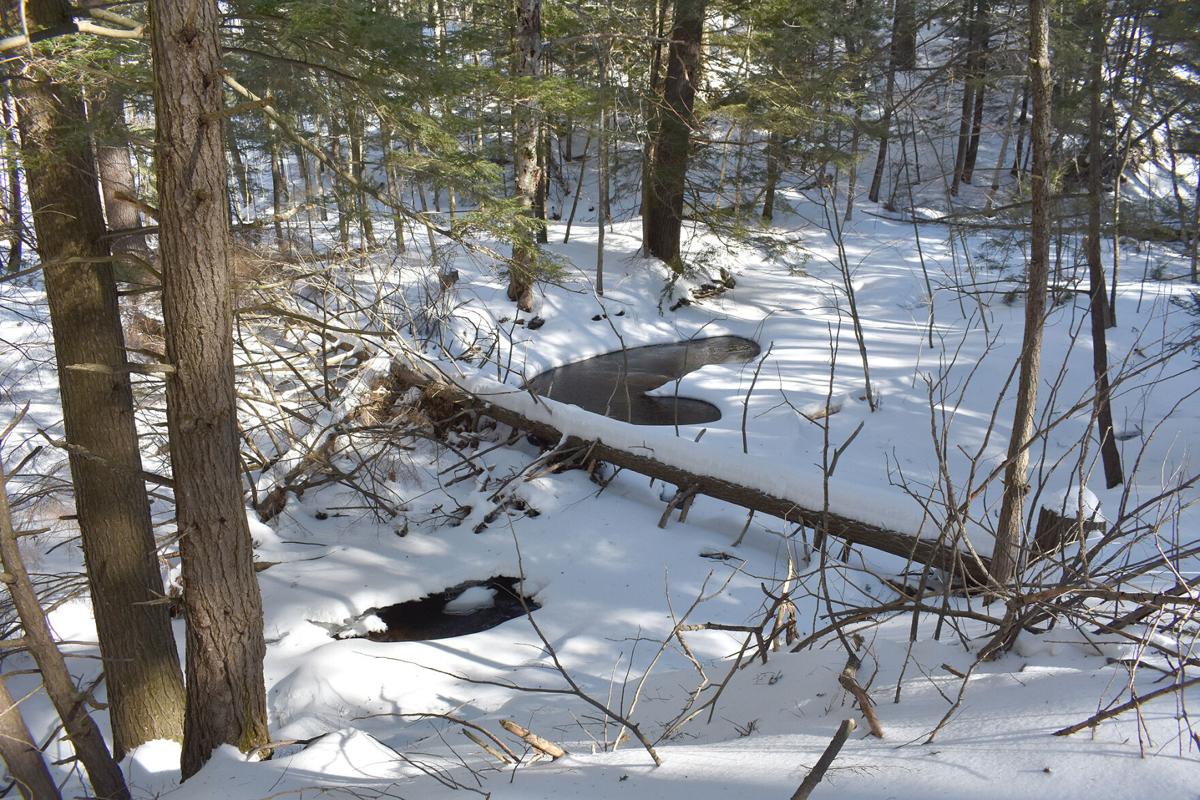 Trees were cut and laid across the snow-covered Poor Farm Brook in Gilford by Belknap County Conservation District workers. The trees slow the flow of water and filter debris during heavy rain events, create deeper pools of water for trout habitat, and generaly improve the vitality of the brook as well as downstream ecosystems. (Adam Drapcho/The Laconia Daily Sun photo)

Donna Hepp, Belknap County Conservation District board member, gestures toward Poor Farm Brook as it passes through Gunstock in Gilford. A BCCD project cut trees and laid them across the brook, mimicing the effects of a windstorm, which has several benefits to the brook's vitality. (Adam Drapcho/The Laconia Daily Sun photo)

Trees were cut and laid across the snow-covered Poor Farm Brook in Gilford by Belknap County Conservation District workers. The trees slow the flow of water and filter debris during heavy rain events, create deeper pools of water for trout habitat, and generaly improve the vitality of the brook as well as downstream ecosystems. (Adam Drapcho/The Laconia Daily Sun photo)

LACONIA — In the 1930s, Americans watched as drought and wind combined to create huge dust storms in the Midwest. The Dustbowl, as it came to be known, was the result of modern farming practices applied at large scale to a landscape, and in doing so, removing the ecosystem’s ability to retain moisture and soil even in times of low precipitation. It was a catastrophe for individual farming families and the economy at large.

In response, legislatures passed laws enabling the creation of soil conservation districts, quasi-governmental bodies charged with helping to protect the nation’s soil, without which farmers wouldn’t be able to produce.

Soil conservation groups didn’t form in New Hampshire until the later 1940s, said Steve Taylor, a farmer and former director of the state’s Department of Agriculture. World War II had a way of interrupting things. But, once things got going, counties across the state joined the movement. The Belknap County Conservation District was formed in February of 1946 and is celebrating its 75th Anniversary this month.

“I remember when I worked for the state at the Department of Agriculture office,” Taylor said. He flipped through dusty binders and folders, seeing the names of farmers who joined to develop the conservation districts, county by county. “It was like an honor roll of agricultural leadership in New Hampshire,” he said.

A notice published in the Laconia Citizen 75 years ago announced the creation of “A Soil Conservation sub-district” established for Belknap County “after a large group of farmers representing every town voted unanimously in favor of the project.”

A state committee selected five supervisors from a list of nominees supplied by the meeting. Chosen were: Herbert French of Barnstead, Forest Smith of Gilford, Burt Abbott of Tilton, Fred Warburton of Gilmanton, and Marshall Hodsdon of Meredith.

“Pasture improvement and clearing, removal of stone walls, drainage of swamp lands, and construction of farm ponds were among the projects favored by local farmers,” the notice stated.

Donna Hepp, a member of BCCD’s volunteer board, said those projects, particularly draining wetlands and removing stone walls, are clearly out of step with current practices. However, she said they show how different things were for farmers in Belknap County three quarters of a century ago.

“There were still issues in terms of loss of soil and flood damage. There were horrendous floods and huge damage,” she said. The landscape, covered with forests when European settlers arrived, was almost entirely clear cut. Sparks from railroads ignited the brush left behind by loggers, resulting in uncontrolled wildfires, and when the next significant rain event came, there was nothing to hold back the ash and soil.

So, said Hepp, although New England didn’t experience dust clouds that blocked the sun like the Dustbowl of the Midwest, local farmers had a parallel experience.

“There was a huge loss of soil because of that. It wasn’t a dust bowl, but all that sediment was going into our lakes and rivers,” Hepp said. The conservation group’s priorities, though they seem strange today, were, “applying some of the newest techniques to help heal the land… It was still clearly important here to make use of the best agricultural practices we had to make use of our agricultural land. And we are still doing that kind of work.”

No, not draining wetlands. Hepp said that while the conservation district once had a bulldozer it used to fill in marshes, now it can provide local farmers with access to a machine that will allow them to seed a field without having to till it.

Now seven decades since the creation of the BCCD, the number of farmers in the county is far fewer, and those that are left “tend to be pretty good stewards of the land anyway,” as Taylor noted. Good conservation practices tend to line up with good farming. Take no-till planting, as an example. It’s thought to protect against erosion, and boost biodiversity, by permitting ground cover crops to stay, instead of tilling the soil over each spring. “If you can avoid tilling a field every year, man that saves a lot of diesel fuel and hours sitting in the tractor seat,” Taylor said.

So, instead of focusing on farmers, Hepp said that the BCCD has put itself at the disposal of local municipalities and like-minded organizations.

What they’re hearing is that their help is often required to protect water quality.

“We’re from the Lakes Region – protection of water is very important,” Hepp said.

One recent example can be found in Poor Farm Brook in Gilford, which meanders through the county-owned Gunstock Mountain Resort and eventually empties into Lake Winnipesaukee, near Ellacoya State Park.

Improvements to that brook mimic what would normally happen in natural circumstances. Tall trees grow on the stream bank, then blow over in heavy storms, laying across the brook. Those blowdowns help in several ways. They filter and trap organic material washed downstream, and in doing so prevent the addition of phosphorous and other problematic materials from filling Winnipesaukee. Instead, those plant matters break down in the stream, providing a base to a food pyramid that feeds microbes, which support small insects, then fish and even other predators.

The addition of the large pieces of wood change the way water flows through the brook. At times of high flow, the obstruction slows the water, causing a churning effect that results in deep pools along the brook, ideal habitat for native trout. The slowing of the flow also guards against flooding in downstream neighborhoods.

A current project BCCD is studying is in the Winnisquam watershed, where streams face a problem with culverts placed so roads can cross the water. “The sediment is really dropping out in that area and filling the culverts,” Hepp said. It’s a problem symbolic of many others, as the precipitation patterns associated with climate change mean that many local culverts are not sized appropriately for the heavy rain events expected to become the norm.

Too-small culverts mean that roads will wash out, and large amounts of sediment will be carried into lakes and ponds, lowering their quality. BCCD can leverage grants and other funding sources to provide engineering services to build a plan that can handle the rain load.

Meanwhile, they’ve been providing these services with a shrinking contribution from the county. Hepp said that the BCCD was, as recently as 2014, getting $98,000 per year from county taxpayers. That amount was cut to $60,000 in recent years, and is now being cut again, to $50,000, in the current budget process.

To help make up for that loss, BCCD is establishing a 75th Anniversary Fund, which will be a resource to help leverage grant money and expand services. The district is also opening its operation to more volunteers. In addition to its five-person board of supervisors, BCCD is now welcoming associate board members – people who are interested in local conservation efforts and might like to lend a hand. BCCD will be offering a virtual open house on March 8, at 6 p.m., for those who wish to learn more. Visit belknapccd.org or contact Lisa Morin at 603-527-5880 for more information.

In its budget campaign materials, BCCD claims that for every dollar of county support it receives, it returns $15 worth of value. Taylor contended that they might be underselling themselves.

“I would put it, the value is more intangible,” he said. “If we’re protecting streams, hell, that’s good for everybody. We’re going to need clean water.”