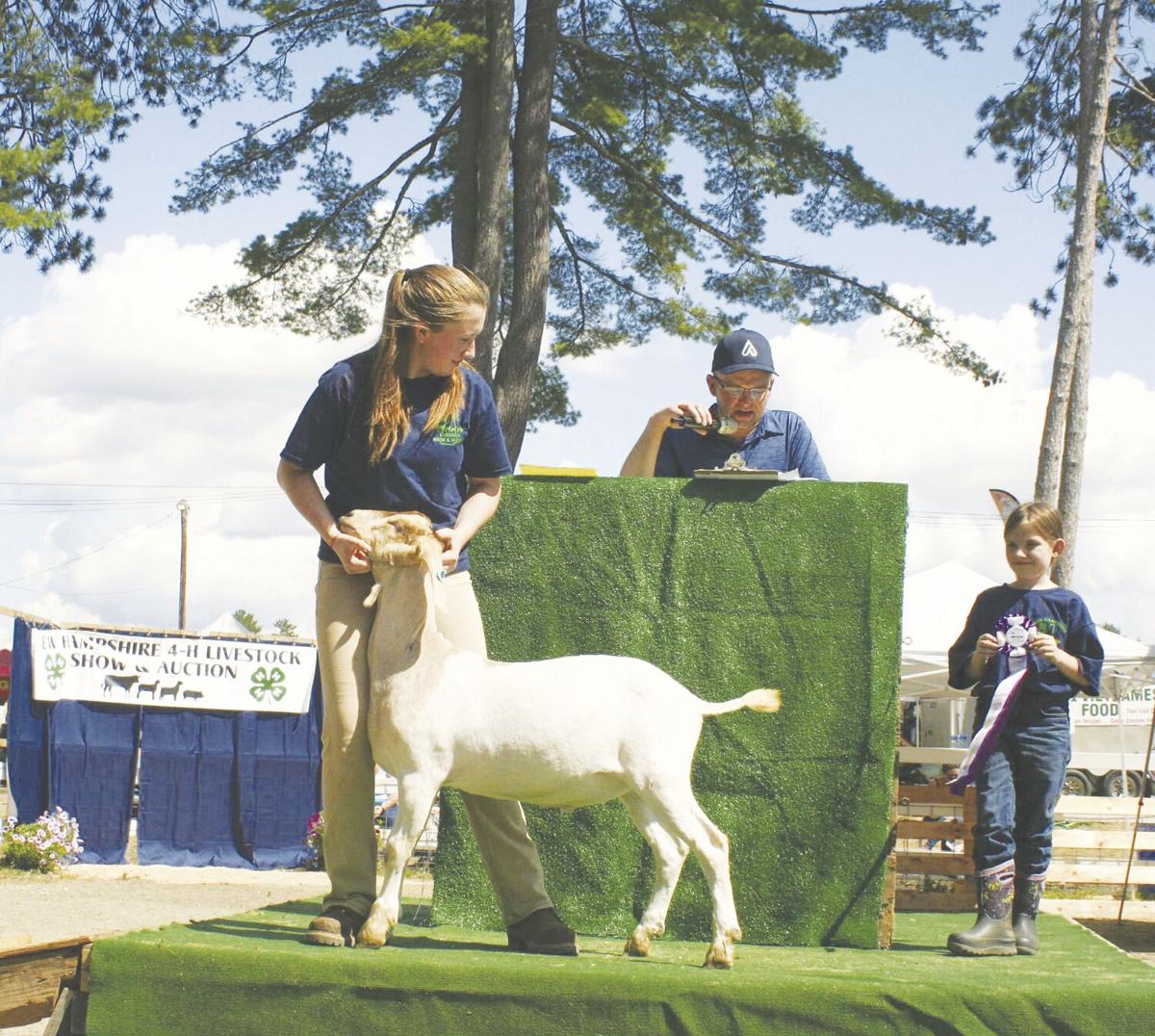 Lauren Gardner of Loudon presents the twin brother of the goat that Carole bought at the 4H Animal Auction at the Hopkinton Fair. 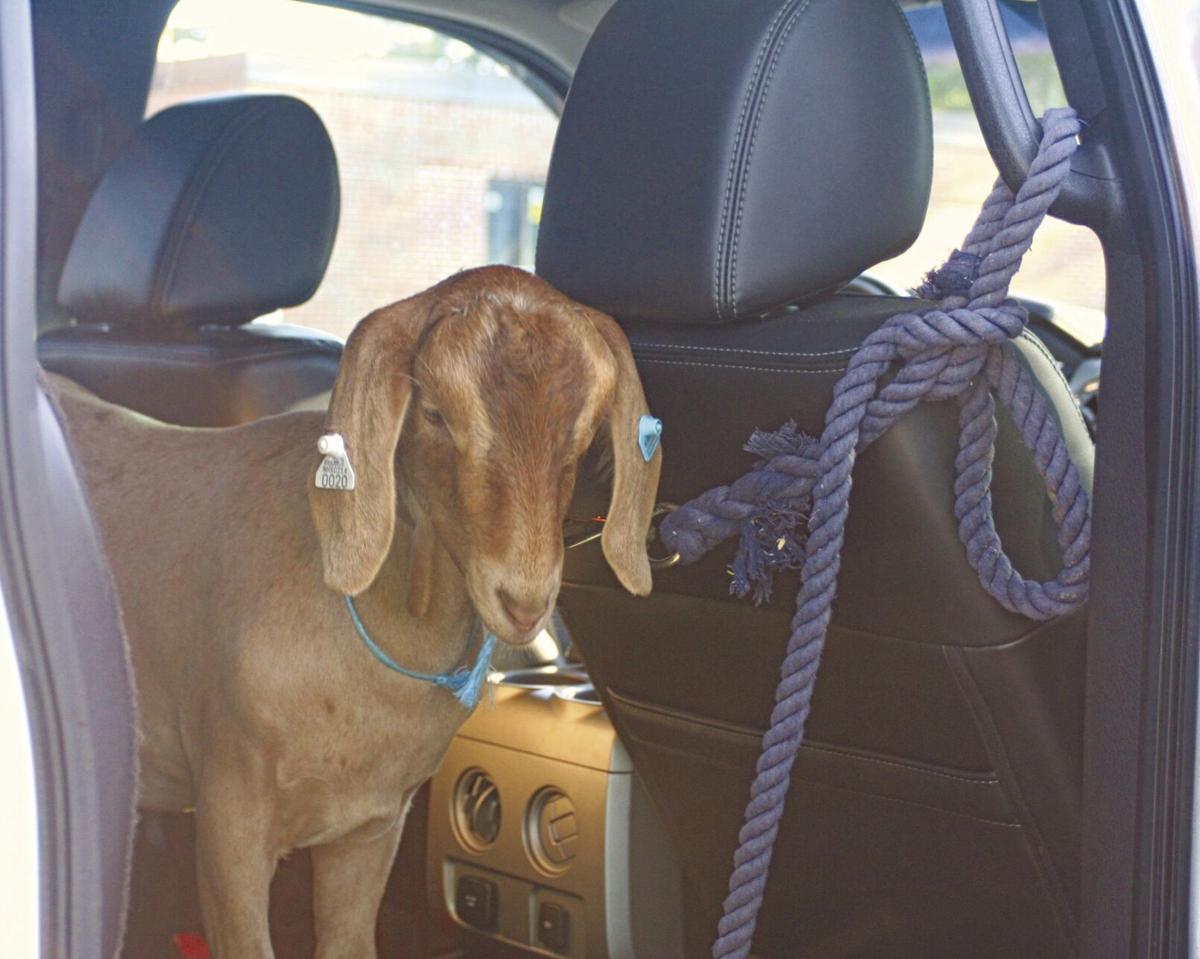 Hops, the goat, is transported to Miles Smith Farm in the back seat of Carole’s farm truck.

Lauren Gardner of Loudon presents the twin brother of the goat that Carole bought at the 4H Animal Auction at the Hopkinton Fair.

Hops, the goat, is transported to Miles Smith Farm in the back seat of Carole’s farm truck.

The 4H Animal Auction at the 2021 Hopkinton Fair, where 2 goats, 7 pigs, 4 lambs, and a steer were for sale, was a resounding success. Ten 4H club members had spent six months to over a year raising and tending the animals in the auction. Hours before the auction started, a judge evaluated each animal, and all bidders were given a program listing the 4H owner, the animal's breed, and weight. Successful bidders were given a choice to take the animal home or have it processed for meat. Local butcher Rick Lemay was on hand to transport the animals to Lemay and Sons Beef in Goffstown for processing.

Except for the pigs and steer who walked around the ring, each goat and lamb was presented on a temporary stage. The 4H owner was introduced, and the audience was told about their motivation for participation. One girl planned on donating her auction money to charity; another 4Her would use his to buy animals to raise for next year's auction. There were no commissions or overhead expenses deducted; the proceeds all went to the 4H owner.

Some readers may feel this is a difficult fate for these animals, but here is my question for you, "Do you eat steak? Do you love bacon?" Wouldn't it be better to know your meat comes from animals that have been cared for and loved? Don't you want to know that the meat is processed in a facility that respects the animals? I know I would.

It must be hard for the youth to auction off their beloved animals. But most of these 4H youth are accustomed to supplying their family and others with fresh meat. The auction was an opportunity for the bidding public to reward them and support human livestock practices while putting delicious meat in the freezer.

Have you ever placed a bid at an auction? It can be confusing. I was bidding on a goat when auctioneer Dan Chute stopped the action, looked me in the eye, and said, "If you bid against yourself again, next time I'll take it." I don't think he would have, but I paid closer attention to the rapid-fire bidding after that.

Despite my novice bidding techniques, I placed the winning bid for a lop-eared Nubian goat named Run, raised by Lauren Gardner of Loudon. I paid $4.50 a pound — $3 over the highest pre-pandemic 2019 auction price. Rather than send Run to the butcher that day, I brought him home in my crew-cab pickup truck. After christening the back seat, his rope tied to a handhold, he stood quietly all the way home. After careful thought, I decided to rename him Hops after the Hopkinton Fair. Hops will live at the farm for at least six more months gaining weight until he is eventually processed for meat.

It felt good to encourage a 4H youth who devoted her time to raising two fine meat goats rather than playing video games or gazing into her phone. I'm also thankful for the other bidders who value the hard work of 4H youth and the quality of their animals. Next time, I'll be a better bidder. (I've been told you have to take turns.)

Carole Soule is co-owner of Miles Smith Farm, in Loudon, where she raises and sells beef, pork, lamb, eggs and other local products.