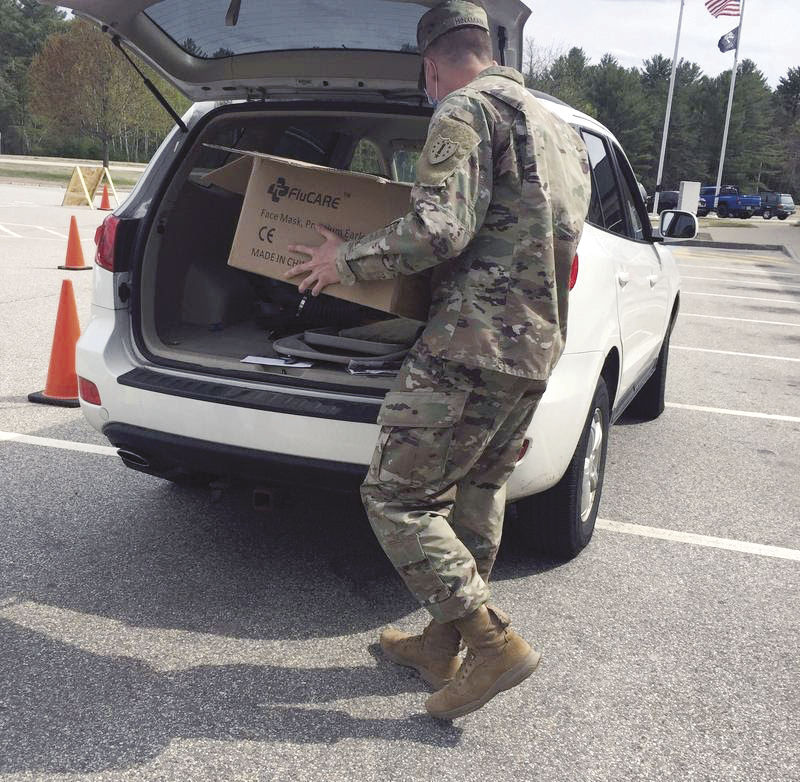 A member of the New Hampshire National Guard helps load masks into a van at the Department of Motor Vehicles in Concord in May. (Todd Bookman photo/NHPR)

In early May, as New Hampshire officials began to lift restrictions on some corners of the economy, Gov. Chris Sununu announced that the state would distribute its stockpile of disposable masks to businesses and nonprofits for free.

Now, thanks to newly provided public records, we can see where those masks ended up — and which businesses were the biggest beneficiaries.

The masks distributed through this program came from a variety of sources, including a cache obtained in China by local inventor Dean Kamen. The state set up an application portal where local companies could place their orders, and the New Hampshire National Guard was enlisted to help with distribution, which took place over several weeks at Division of Motor Vehicles offices around the state.

The program ended within several weeks, on May 22 — but not before receiving requests for more than 7 million masks from 15,000 businesses, nonprofits and other entities in the state, according to emergency management officials. (All leftover disposable masks were moved to state-owned liquor stores, where they are available for purchase in boxes of 50 by the public for $30 each.)

Records obtained by NHPR through a right-to-know request show that large grocery chains, shopping malls and tourist-geared enterprises were among the biggest beneficiaries of the free mask distribution program.

A couple of the state’s popular tourist trains, including the White Mountain Central Railroad, secured large quantities. So did the state’s court system, Division of Motor Vehicles, and a number of municipalities. (Full disclosure: New Hampshire Public Radio also received seven boxes of masks, as reflected in the state’s distribution records.)

You can search through the full database of free mask recipients, which was provided to NHPR through the state’s Joint Information Center, using this link.

Four numbers to watch to measure state progress against COVID-19

If you’re wondering how we will know when the pandemic is over, there’s good news and not so good news.