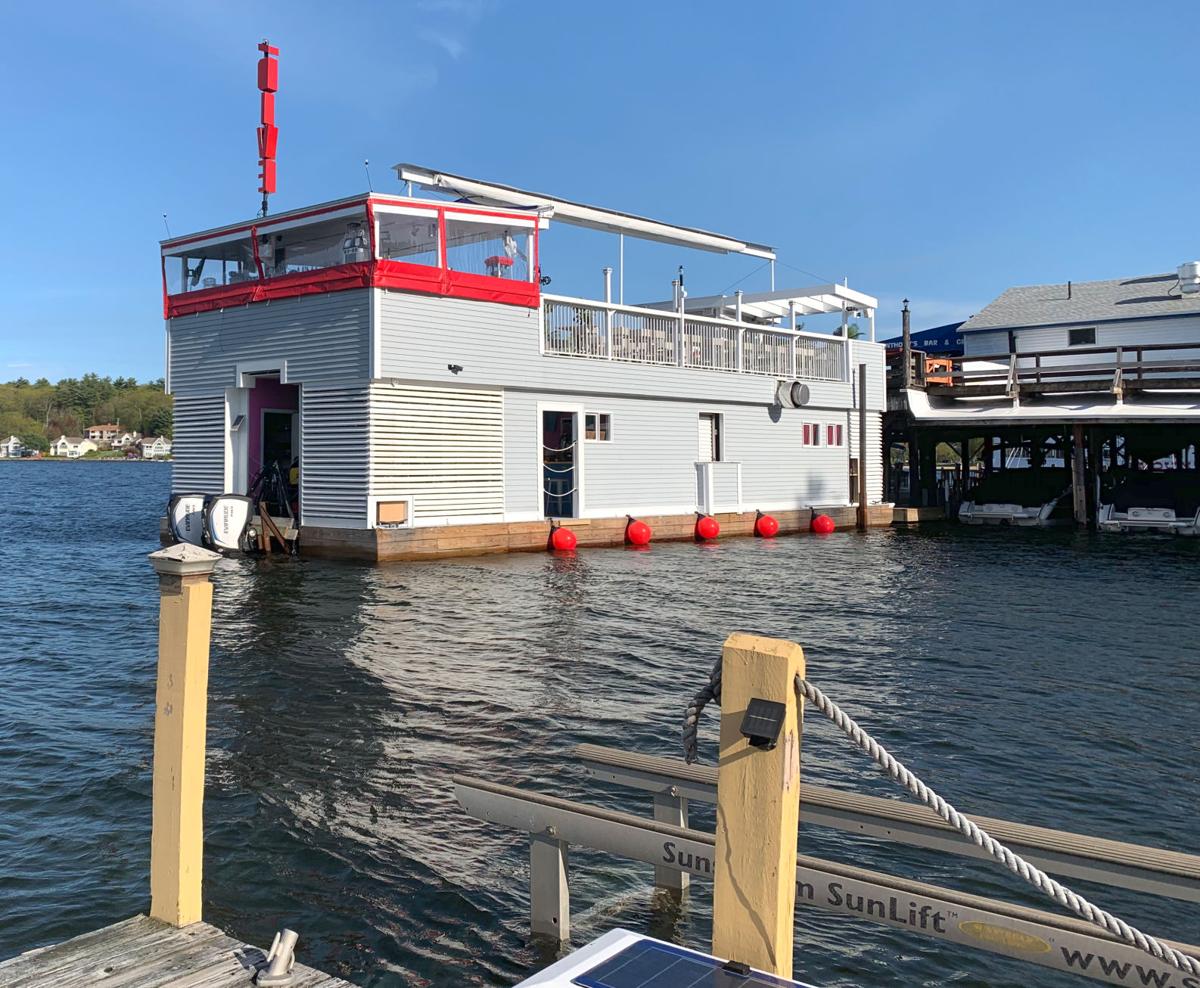 The Dive, a two-story bar attached to a self-propelled barge, tied up to the Winnipesaukee Pier at The Weirs in Laconia. Some neighbors along nearby Simpson Avenue say the boat, which has a capacity of 80 people, is not a welcome addition to the area and would like it moved to the other side of the pier. (Courtesy photo) 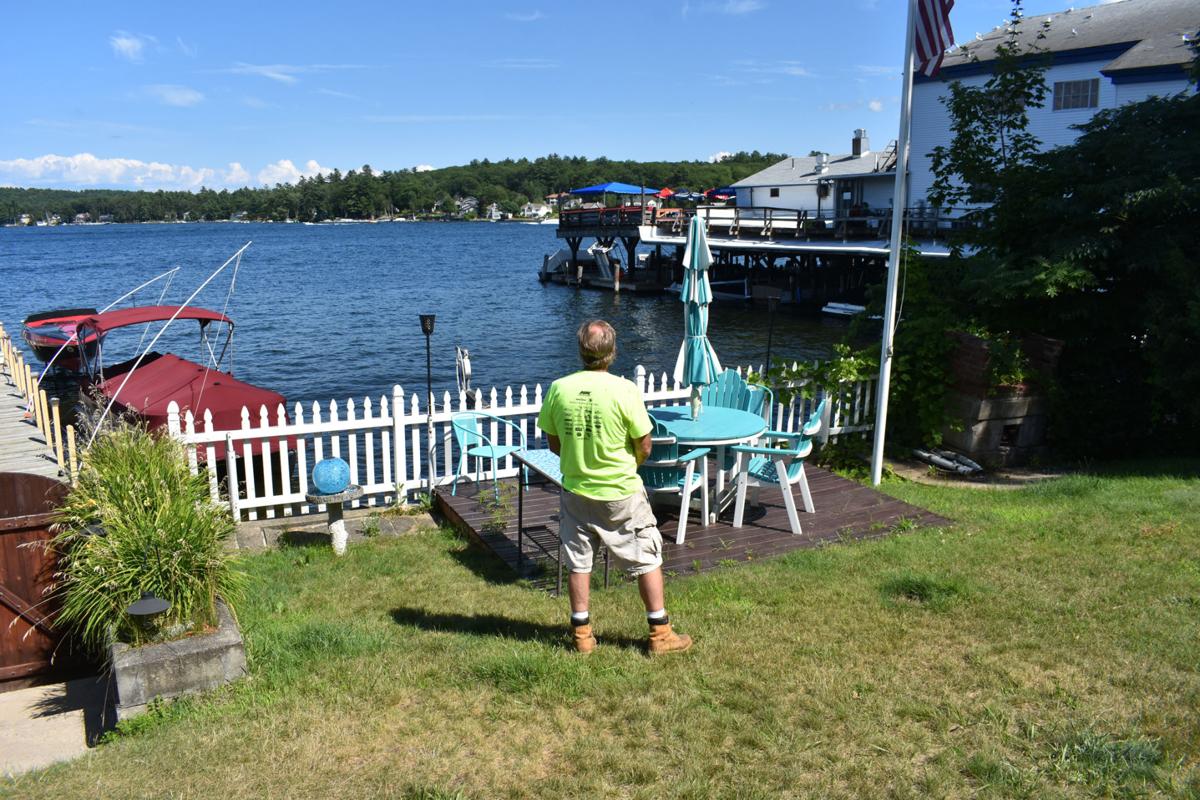 Scott Berry looks out from his yard to the section of the Winnipesaukee Pier where The Dive usually parks. He said the floating bar is a noisy neighbor that diminishes his and his wife's ability to enjoy their property. (Adam Drapcho/The Laconia Daily Sun photo) 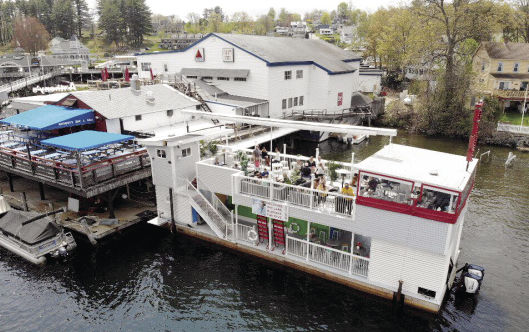 The Dive, a two-story bar attached to a self-propelled barge, tied up to the Winnipesaukee Pier at The Weirs in Laconia. Some neighbors along nearby Simpson Avenue say the boat, which has a capacity of 80 people, is not a welcome addition to the area and would like it moved to the other side of the pier. (Courtesy photo)

Scott Berry looks out from his yard to the section of the Winnipesaukee Pier where The Dive usually parks. He said the floating bar is a noisy neighbor that diminishes his and his wife's ability to enjoy their property. (Adam Drapcho/The Laconia Daily Sun photo)

LACONIA — Brian Rillahan heard something big had tied up to the Winnipesaukee Pier near his home on Simpson Avenue.

“I pulled down the street and I was like, ‘Are you kidding me?'” he said.

It was The Dive, a two-story bar built onto a self-propelled barge.

On one side are residents of several small homes as close as 100 feet from the spot where The Dive spends many evenings and some days, offering its customers a laid-back mix of cocktails, conversation and food.

The neighbors are facing off against the proprietors of the boat, which often motors at slow speed to sandbars during the day and returns to the pier when the sun is going down.

And like many of today’s controversies, it has moved online. Owners of the business put up a post on its Facebook page, urging people to sign a petition to “Keep The Dive in The Weirs” and criticizing in no uncertain terms a person who complained about the situation.

Now the city is getting involved. The owner of the pier will have to appear before the Planning Board to seek permission for the business to stay there. In planning parlance, having such a business connected to the pier is considered a new use, and requires an amended site plan.

One thing the board could consider in whether to approve such a plan would be concerns of neighbors.

Planning Director Dean Trefethen said The Dive can continue its present operations at the pier in the short term and before the Sept. 3 Planning Board meeting. That’s when the issue will be taken up if the owner of the pier, East Coast Flightcraft, decides to continue to host The Dive.

The neighbors’ complaints center on noise, aesthetics, a revolving neon sign that shines into windows and difficulty they have in navigating around it to get into their boat slips.

Rillahan, who has lived on Simpson Avenue for decades, said the initial complaint from neighbors was about noise.

“They have been better about the noise factor since we complained,” he said. “They turn the music off at 9 or 10 depending on the day of the week.”

Loud voices are something else.

“If you have 60 people, it’s going to make noise,” he said. “Everything carries across the water.

“Can you blame them for that? Not really, because people are going to talk. People have a couple cocktails and they talk a little bit louder.

“It’s pretty much just the location is what people on this street have an issue with. If they were to move it to the other side of the pier, done.

“We’re not trying to put anybody out of business, but you know all of the sudden you put this barge right in front of our property.”

Trish Marchetti, who also lives on Simpson Avenue, said The Dive remained at the pier from May 16 until June 29. After that, it began departing by day and returning at night.

She said it would have been preferable if the Planning Board permission process took place before the boat began spending time at the pier this spring and summer.

Jamie Merriam, is the captain and co-owner of The Dive, and Betsy Sullivan is co-owner. They began operations last summer.

Merriam said he doesn’t think The Dive has been a bad neighbor.

“They put in a few complaints to the police department about noise,” he said. “The cops showed up unannounced. They said, ‘We couldn’t even hear you as we were walking up, you guys are fine.’

“Another time the Marine Patrol was calling in, somebody said we were obstructing their port area. It was unfounded.

”We’re not hurting anybody at all. We have ambient music, Jimmy Buffet, no live band. We keep our music dialed to four, you can easily talk over it. It’s not a nightclub atmosphere. It’s a casual atmosphere.”

Residents would like the boat moved to the other side of the pier, but Merriam said he has invested in additional dock, pilings and shore power at the present location.

“If somebody wants to foot the bill for us to go to the other side, fine, but it won't come out of my pocket,” he said. “I've done nothing wrong.”

It’s also not clear if there is a suitable spot for the boat on the other side of the pier.

Ryan Cardella, operations manager for East Coast Flightcraft, the owner of the pier, said he is concerned about the neighbors and is working to find a new location at the pier for The Dive.

“We will see what works best for safety purposes,” he said. “We are brainstorming right now. This is a unique piece. It’s not like we’ve done this before.”

Aside from the neighborhood dispute, The Dive seems to be a hit with people who like to have a drink near the water.

Its movements are announced online, and once it gets to a sandbar, there is usually a fun-loving crowd of boaters who anchor nearby, wade in the water and climb aboard.

The Dive can drive “spuds” from each corner into the lake bottom to keep it stable.

Initial plans called for it to pick up patrons via a gang plank that could be dropped onto public docks, but it turned out it could not use public docks — at least not without necessary permitting.

Last summer, The Dive’s owners tried to sell tickets to a karaoke cruise that would collect ticket buyers from the Alton public docks, but police officers were there to prevent any guests or supplies from leaving the shore.

After that, it was decided that any future cruises would have to depart from privately owned docks.

The Dive, which is 62 feet long and 22 feet wide, can often be found at Smalls Cove in Alton and at Braun Bay in Moultonborough.

LACONIA — A floating bar has taken the city to court, saying city efforts to restrict its operation in Weirs Beach are unlawful.