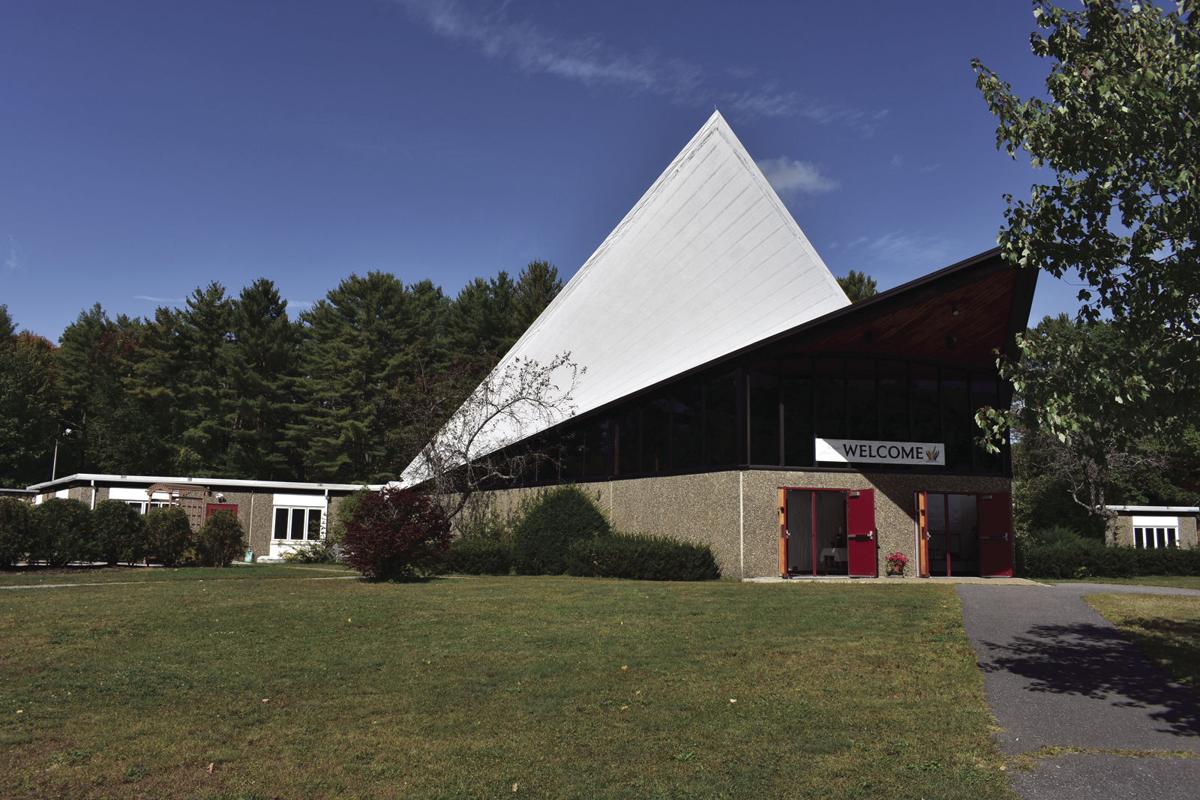 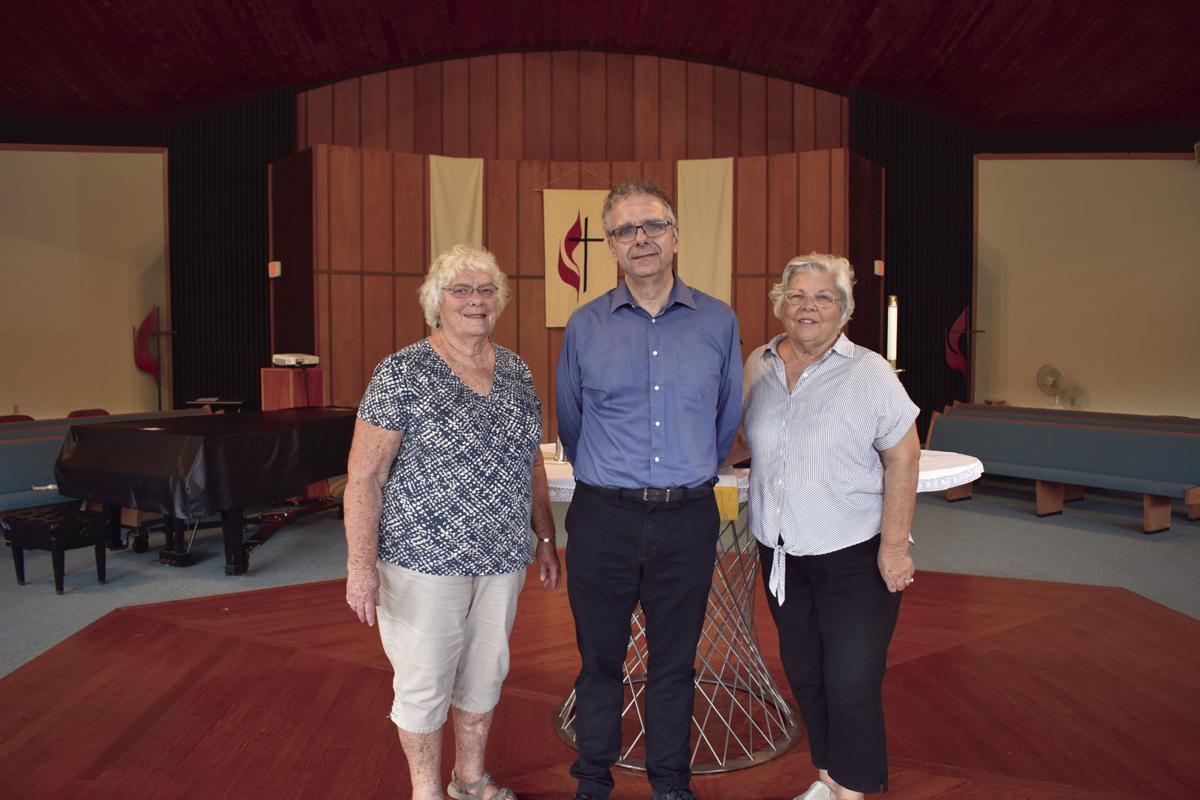 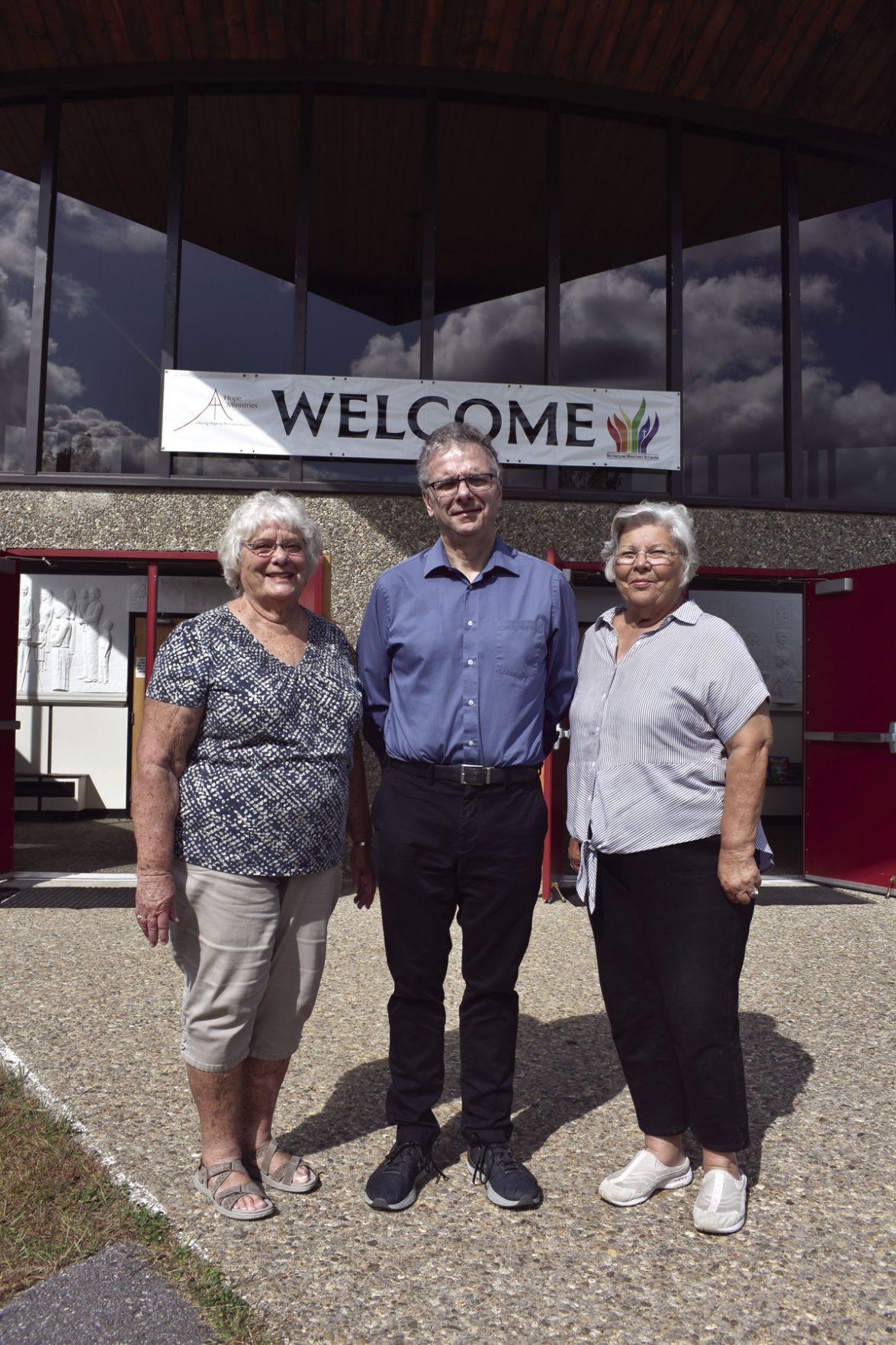 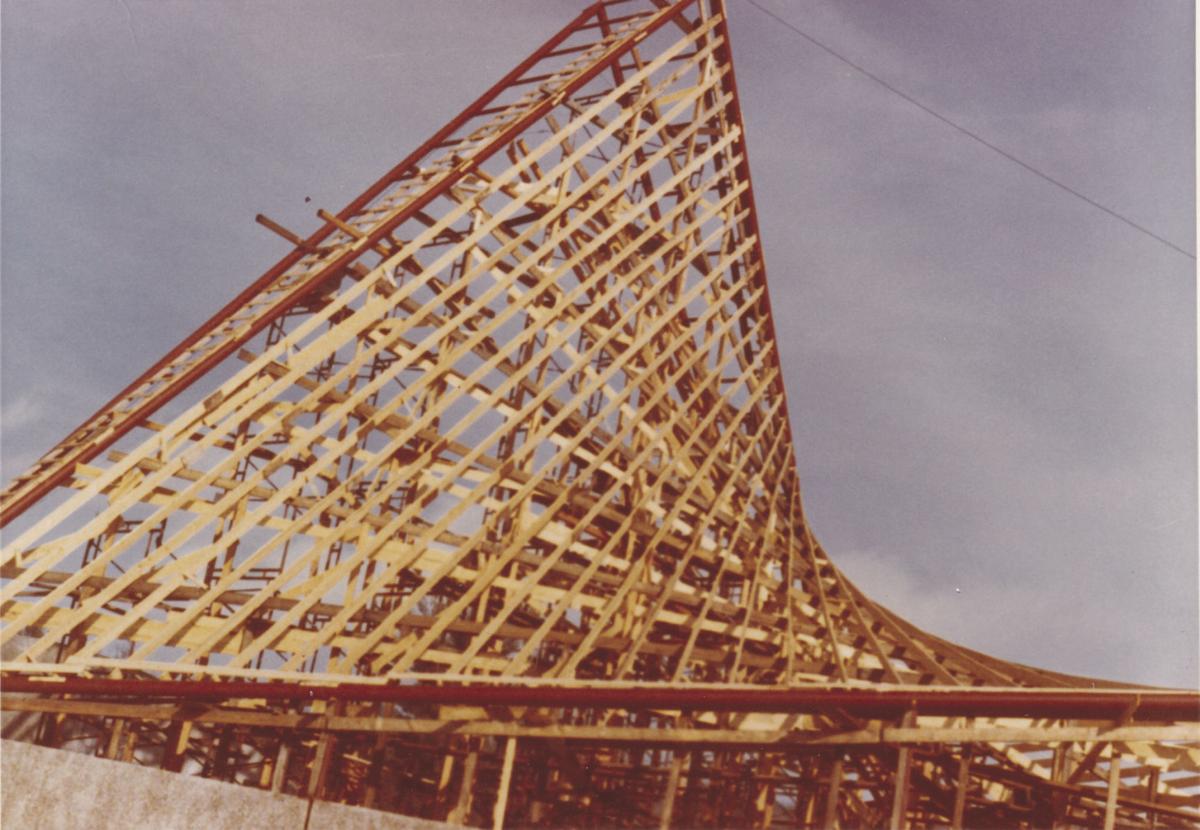 The hyperbolic parabolas that create an uplifting roof are put in place during the construction of the First United Methodist Church of Gilford. (Courtesy Photo) 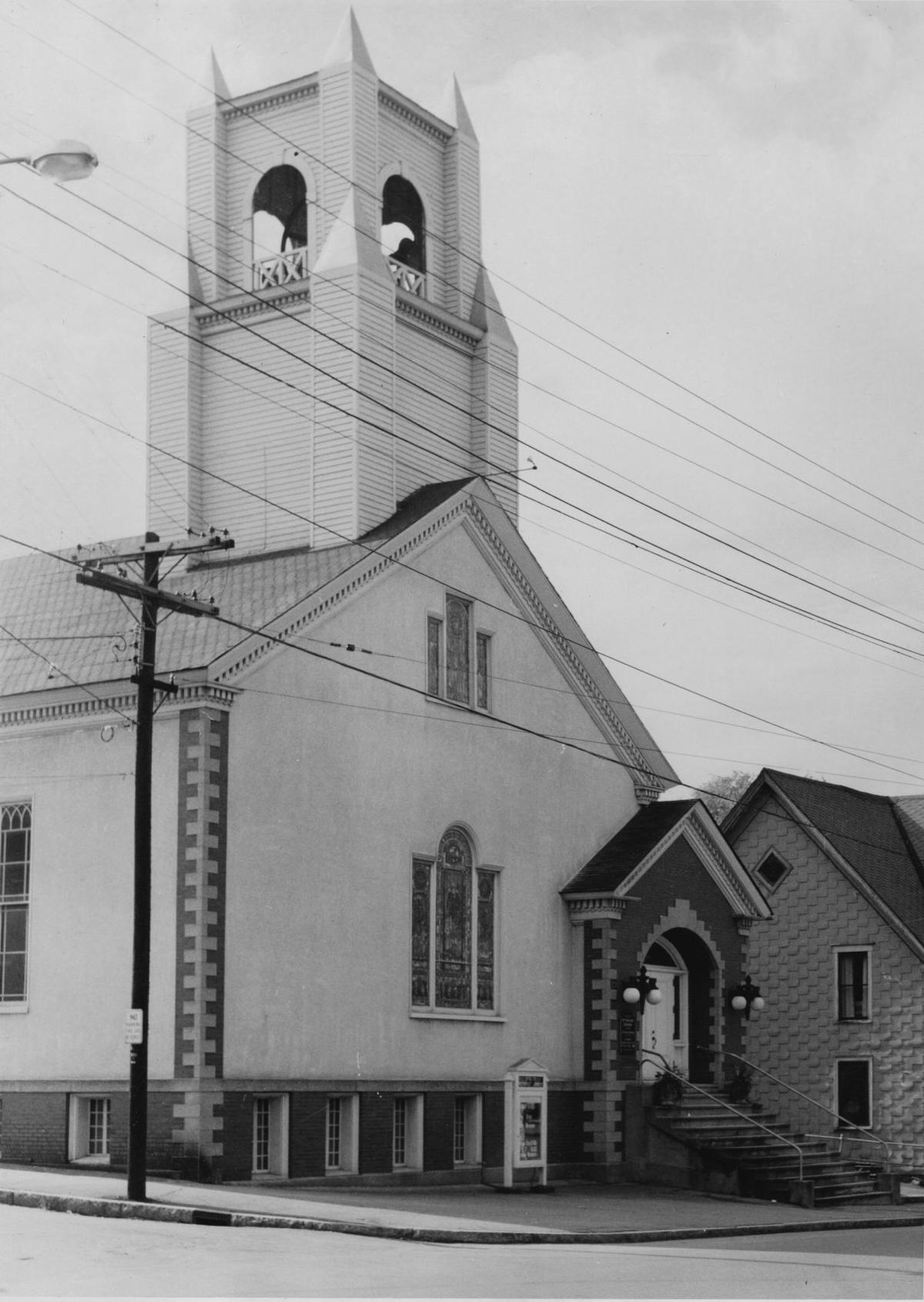 The Laconia Methodist Episcopal Church, at the corner of Union Avenue and Baldwin Street, was razed to make way for Sunrise Towers during Laconia's urban renewal. (Courtesy Photo) 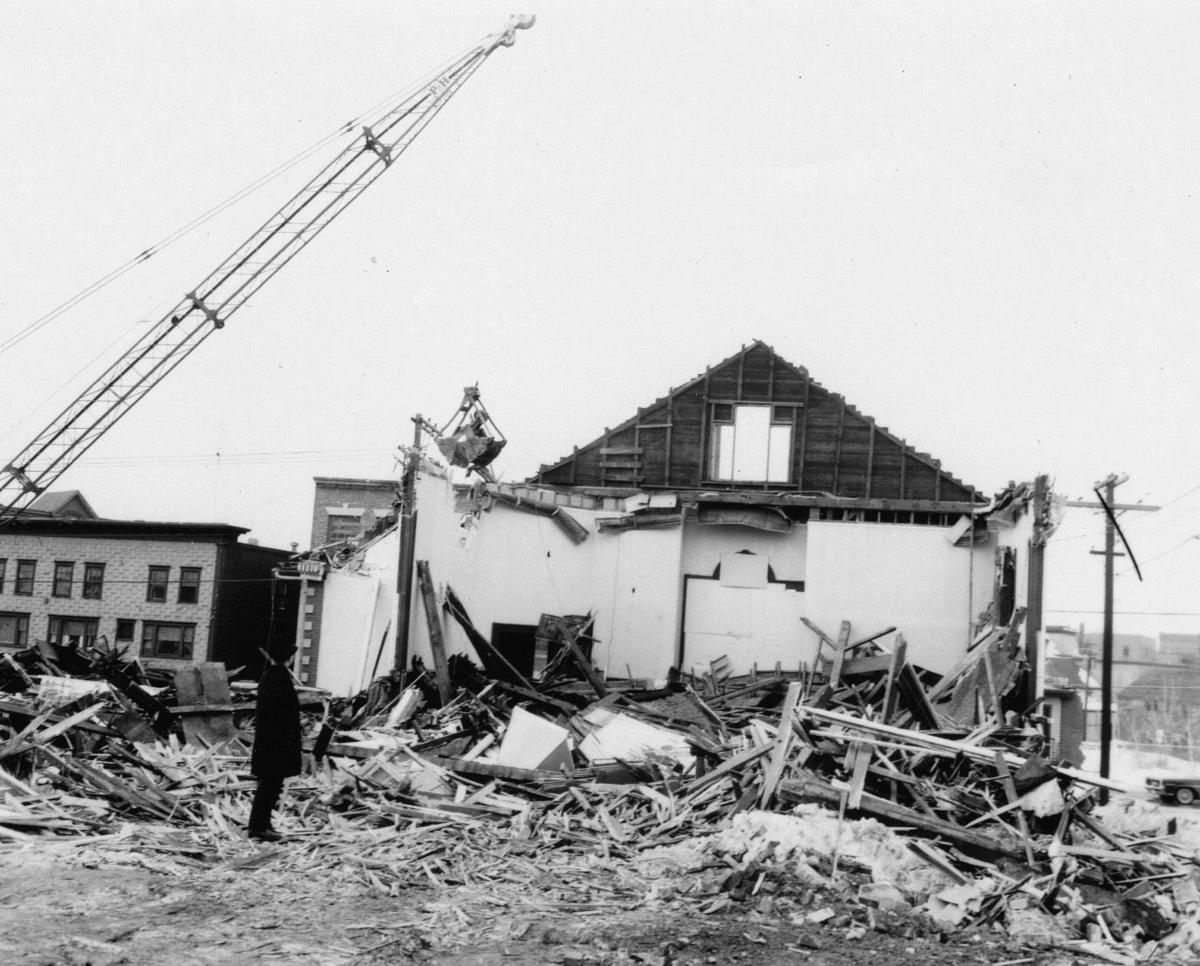 The razing of the Laconia Methodist Episcopal Church during urban renewal was a traumatic point in the Methodists' history. (Courtesy Photo) 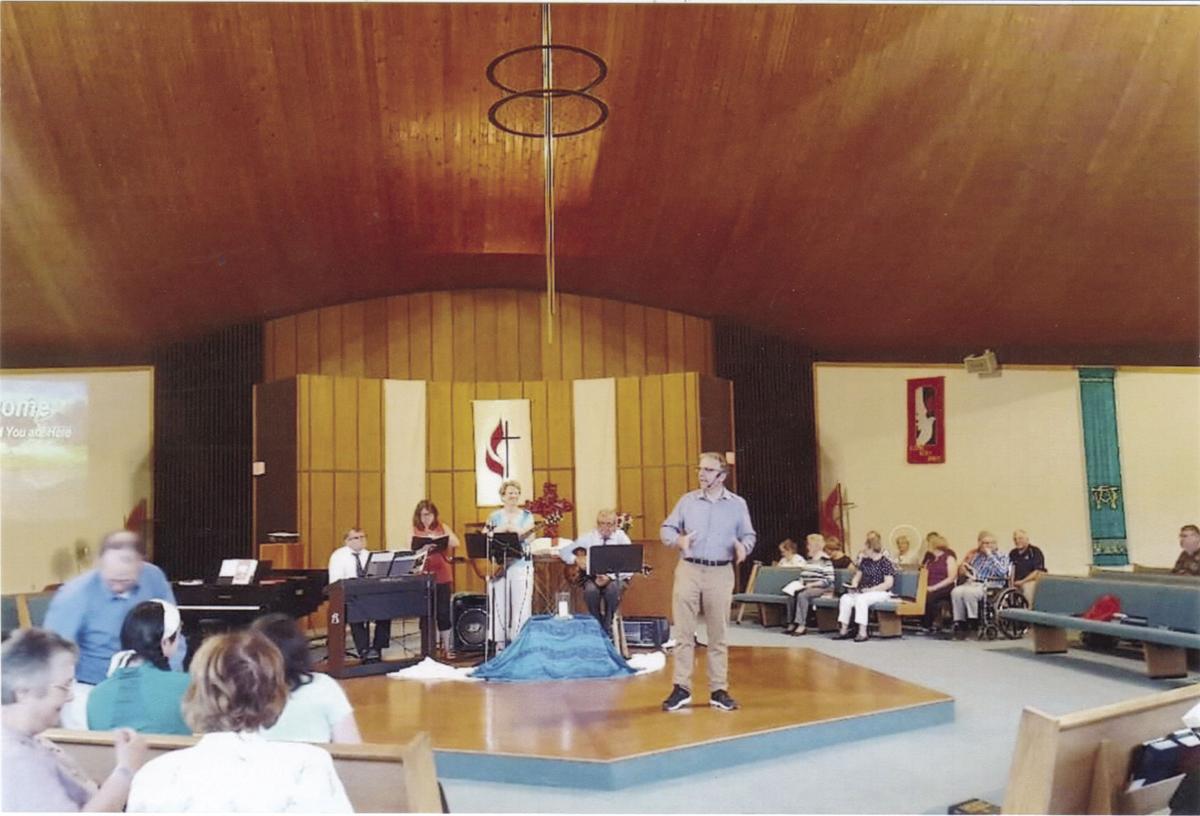 Worship in the round also includes musical performances in the sanctuary of the First United Methodist Church of Gilford. (Courtesy photo)

The hyperbolic parabolas that create an uplifting roof are put in place during the construction of the First United Methodist Church of Gilford. (Courtesy Photo)

The Laconia Methodist Episcopal Church, at the corner of Union Avenue and Baldwin Street, was razed to make way for Sunrise Towers during Laconia's urban renewal. (Courtesy Photo)

The razing of the Laconia Methodist Episcopal Church during urban renewal was a traumatic point in the Methodists' history. (Courtesy Photo)

Worship in the round also includes musical performances in the sanctuary of the First United Methodist Church of Gilford. (Courtesy photo)

GILFORD — The First United Methodist Church has adapted to a lot of challenges over the years, but it will be celebrating stability in the face of change on Sunday, Sept. 29, when it marks the 50th anniversary at its current location in Gilford since it moved from Laconia as a result of the latter’s urban renewal program.

“It is both a time of celebration, as we praise God for all of the ways we have been blessed during the past half-century; and of wonder, as we envision what God has in store for our ministry during the next 50 years,” said the Rev. Jim Shook — known to church members as Pastor Jim — in the church newsletter.

Rev. Dr. Sudarshana Davadhar, bishop of the New England Annual Conference of the United Methodist Church, will lead the rededication of the church at 18 Wesley Way, off Route 11A in Gilford. Joining him will be Rev. Taesung Kang, superintendent of the New Hampshire District, and Shook.

Shook said some of the church’s former pastors also will be on hand for Sunday’s ceremonies, either in person or on video. There will be a slideshow with more than 100 photographs illustrating the history of the church, along with musical selections by the choir, with assistance from members of the Lakes Region Singers, the Handbell Choir, the Hope Dance Choir, a string ensemble, and the Praise Team.

Sharon Walden who, with Betty Welch, compiled a history of the church for its 150th anniversary celebration in 2011, has been pulling together old and new information for the Jubilee event.

Meanwhile, Methodists in Laconia began holding regular Sunday services in Gove’s Hall in 1860, the year of the great fire that destroyed not only Gove’s Hall, but also many of the businesses in the area. After renting space to meet for a few years, the congregation purchased the former Universalist Meetinghouse at the corner of the current Union Avenue and Baldwin Street, after the Universalists merged with the Unitarians and built a new meetinghouse on Main Street, where Citizens Bank is located today.

The Methodists renovated their new church in 1874, but it remained a traditional white New England-style building with a pepper-pot belfry. They remodeled the belfry in 1924 into a traditional Episcopal style with a stucco finish and a square bell tower and steeple.

Meanwhile, a group of Methodists in Gilford converted another former church into their own meetinghouse. As the years passed and the attendance fell, they alternated worship services with the Free Will Baptists and eventually merged into the Gilford Community Church.

In 1940, the Gilford Methodists sold their old church and turned the assets over to the First Methodist Church of Laconia, helping to retire that church’s debt. The Gilford church became home to the Thompson-Ames Historical Society.

When the Laconia City Council voted to take part in the federal Downtown Revitalization and Urban Renewal Program in 1966, the First Methodist Episcopal Church on Union and Baldwin was included in the urban renewal district. The Laconia Housing and Redevelopment Authority targeted the property for a high-rise elderly housing complex — Sunrise Towers.

“We were in shock,” Nancy Fields recalled.

Fields had joined the church in 1957 and said the church was important to South End residents, many of whom could walk to worship. They had no idea what to do and, although there was an opportunity to purchase property on North Main Street, the congregation was unsure.

“Then there was a wonderful thing,” Fields said. “The Jewish community offered to let us use their synagogue. They were the only ones that stepped up. It was the first sign of light at the end of the tunnel.”

The last service at the Laconia church took place on Nov. 5, 1967, and the worship and Sunday school moved to Temple B’nai Israel for nearly two years.

During that time, the congregation continued to look for a permanent home. Longtime members Royal and Verna Smith of Gilford came up with a solution.

When the Route 3-11 bypass came through Gilford, it cut through the Smiths’ High Maples Farm on Morrill Street, and they offered to donate a section of the property on Gilford Avenue as a site for a new church, in memory of their parents, Samuel and Wilfred Smith and Fred and Ethel Friend. The church also purchased the surrounding 116.3 acres.

Groundbreaking took place on June 30, 1968, and the first service took place on Aug. 3, 1969, in the new church, designed by Daniel Tully of Melrose, Massachusetts — the same architect who designed Our Lady of the Lakes Catholic Church in Lakeport. At that time, only the sanctuary had been completed; work continued on the educational wings of the church.

The building was dedicated on Oct. 10, 1969, with organist and composer V. Earl Copes giving a recital on the new Saville 2 organ, said to be the largest electronically generated church instrument in northern New England.

In her history of the church, Walden noted that the sanctuary is designed for worship in the round, symbolizing “the continuance of unity and equality.” The upswinging roof symbolizes uplifting one’s life under the protection and guidance of God’s love. The intertwining of the metal spokes on the base of the communion/altar table symbolizes the nets used by the fishermen-disciples. The pulpit is in the form of the bow on a boat from which Jesus preached. A cross suspended from the roof has three metal rods symbolizing the Trinity, with the mesh around them representing the crown of thorns Jesus wore at His crucifixion.

The “unity and equality” symbolism has been very important to the church, and there is a “welcome” banner over the doors. While Methodists worldwide are debating the role of LGBTQ (lesbian, gay, bisexual, transgender, and queer or questioning) Christians, Shook said there is no restriction at the First United Methodist Church of Gilford.

“We’re a welcoming community for everybody,” he said, noting they are part of the Reconciling Ministries Network.

When the bishop appointed Shook to serve in Gilford two years ago, the members had just embarked on a strategizing program to determine how to be more engaged in the community. That led to the launch of Hope Ministries earlier this year.

“It’s not a renaming of the church, but a new calling,” Shook said. “It’s looking at not only where we’ve been, but where God wants us to be. We’re a place where people can experience hope in their lives, whether they’re experiencing personal or economic problems or injustice.”

“The emphasis is on helping out,” Shook said, “helping us to focus on what God’s calling us to be.”

LACONIA — One of Laconia’s more historic churches will reopen this weekend after being closed for six months for major renovations.