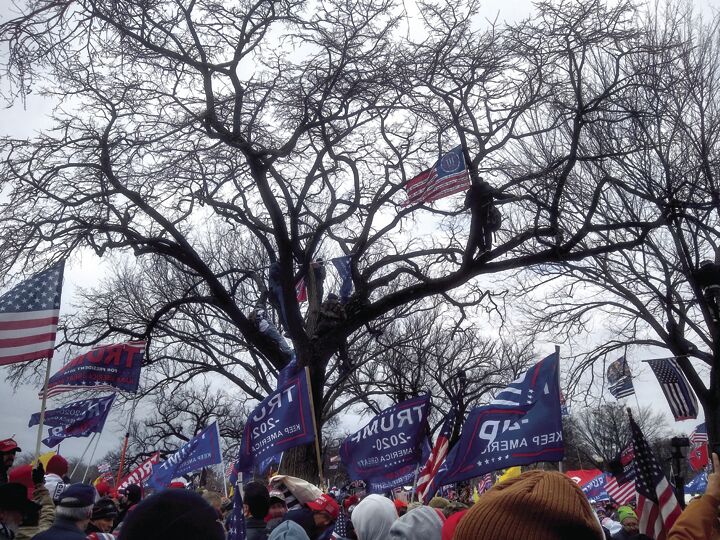 "Just about every tree down at the Ellipse had people in it like this who wanted a better view of President Trump speaking," said Tim Carter of Meredith, who took this photo on Wednesday in Washington D.C. "No doubt they had the best view of all." (Courtesy photo/Tim Carter) 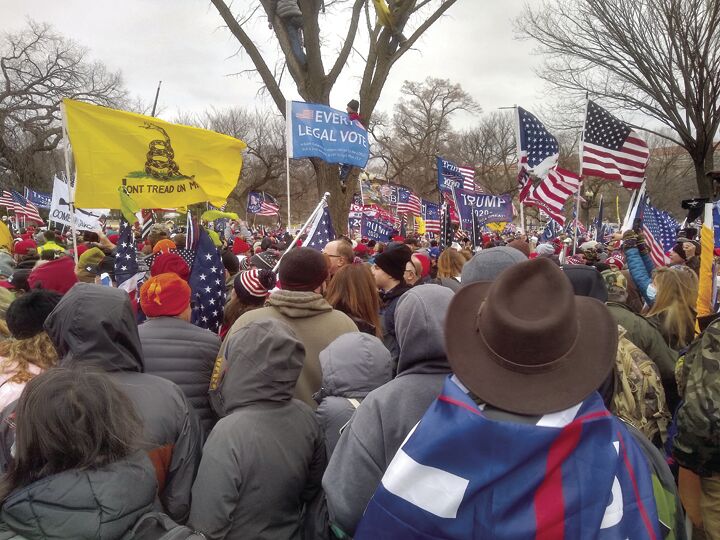 "Flags and banners of all types were everywhere," said Tim Carter of Meredith, who attended the rally in Washington, D.C. on Wednesday. "People wore them as capes too. It's important to note there were no fires set, there were no statues torn down, and not an empty can of spray paint was to be found. I couldn't spot a piece of litter anywhere on the National Mall or the Ellipse." (Courtesy photo/Tim Carter) 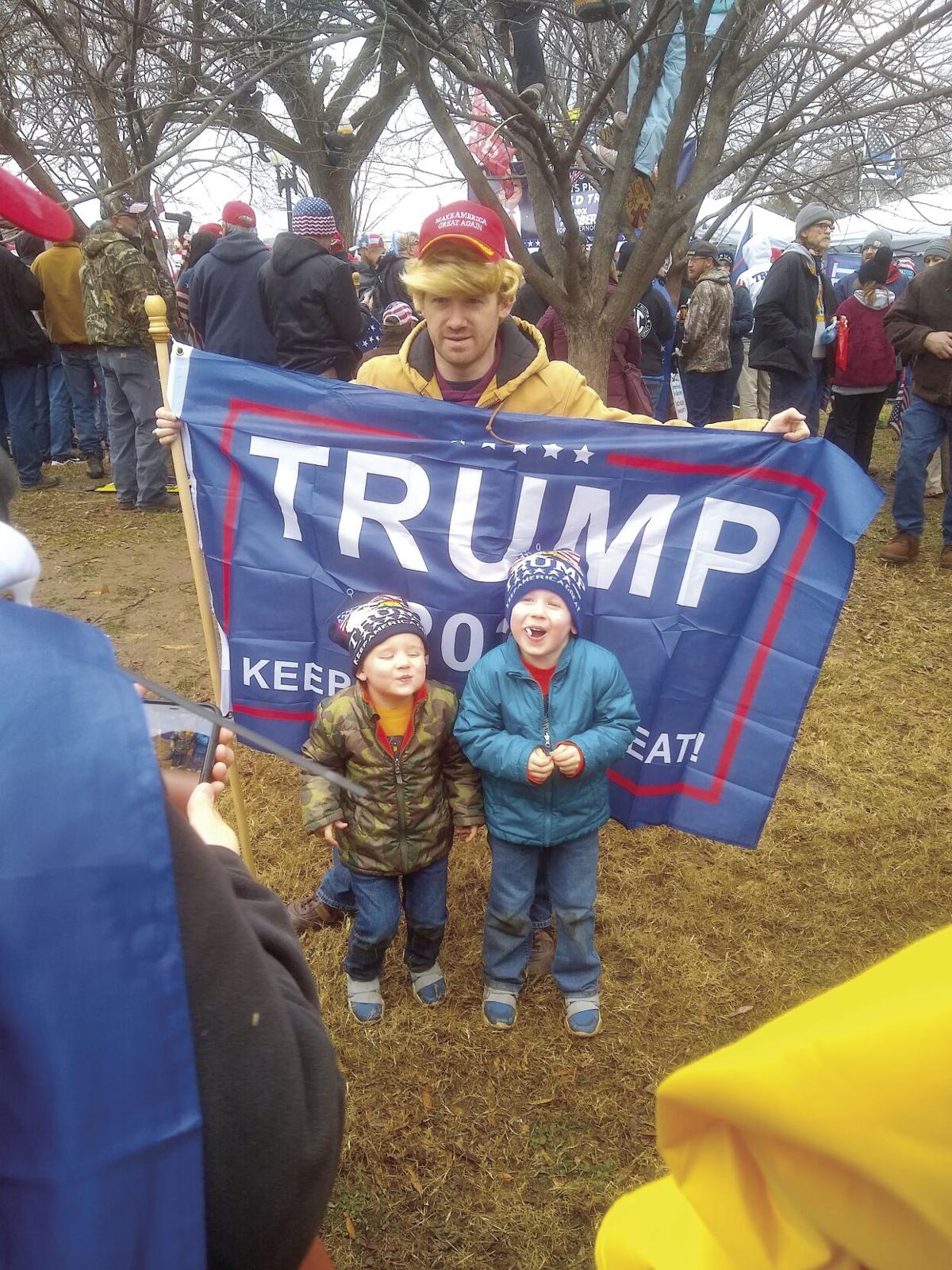 "These two young patriots were a perfect example of the mood of the entire crowd," said Tim Carter, who was in Washington, D.C., on Wedneday. "Everyone was happy, excited, and full of patriotism. No one I saw was angry or grinding an axe." (Courtesy photo/Tim Carter)

"Just about every tree down at the Ellipse had people in it like this who wanted a better view of President Trump speaking," said Tim Carter of Meredith, who took this photo on Wednesday in Washington D.C. "No doubt they had the best view of all." (Courtesy photo/Tim Carter)

"Flags and banners of all types were everywhere," said Tim Carter of Meredith, who attended the rally in Washington, D.C. on Wednesday. "People wore them as capes too. It's important to note there were no fires set, there were no statues torn down, and not an empty can of spray paint was to be found. I couldn't spot a piece of litter anywhere on the National Mall or the Ellipse." (Courtesy photo/Tim Carter)

"These two young patriots were a perfect example of the mood of the entire crowd," said Tim Carter, who was in Washington, D.C., on Wedneday. "Everyone was happy, excited, and full of patriotism. No one I saw was angry or grinding an axe." (Courtesy photo/Tim Carter)

MEREDITH — Local resident Tim Carter went to Washington on Wednesday to get a first-hand view of historic events, but he couldn’t have known just how historic.

A riotous mob broke into the Capitol building, disrupted proceedings and sent congressional members fleeing. This came after President Donald Trump said the election was “an egregious assault on our democracy,” and urged supporters to walk to the Capitol and added “you will never take back our country with weakness.”

Carter was in attendance when Trump delivered his speech at The Ellipse, a park south of the White House.

“I wanted to hear the president speak,” he said. “I just am really disappointed with the turn of events since the election.”

He said he has no doubt “the election was stolen,” pointing to conspiracy theories involving voting machines and the way the vote was counted.

Trump has been unsuccessful in several dozen lawsuits challenging his loss to Joe Biden, some in front of conservative judges he appointed. State and federal officials have also found no evidence fraud affected the election outcome.

Carter left his home Tuesday morning for the 7½-hour drive to Baltimore, where he stayed in a hotel.

He got up early Wednesday to attend the Trump speech.

“I was pretty excited. I had on my very patriotic flag pants.”

With the temperatures in the 30s, he dressed warmly. He took the subway to Union Station. He then walked about a half-mile to the Capitol and on down the National Mall to The Ellipse.

“It was so packed,” he said, comparing the scene to some of the most crowded events ever at Motorcycle Week. "You were just squeezed in between people. You just had to try to like squeeze through the crowd if you wanted to get out.”

People were not wearing masks, which was OK with Carter because he doesn’t believe the standard advice that a simple facial covering can be helpful in preventing the spread of COVID-19.

“The mood was festive and people were happy. I did not see one helmet, which is really important. No one that I saw, and I have lots of photos and videos, nobody was wearing a helmet.”

People were polite. There were a lot of children and families. He was about 300 to 400 feet away from the president, but it was hard to hear because somebody in the area had a loudspeaker and was preaching about the wages of sin.

Carter soon began to experience a practical problem. He needed to find a restroom and there were no accessible portable toilets. Some were behind a fence. Businesses were not allowing the public use of their restrooms. Many federal buildings were not open.

He began walking to the Capitol to find a restroom. He thinks he was not alone in this regard. A police officer said he wasn’t allowed in, so he walked back to Union Station.

“I know this sounds crazy. I know it sounds nuts. I’m sure there’s a lot of reasons why people went up to the Capitol building, but I think the mayor of the District of Columbia is partly to blame for the mayhem because I think people went up there to go to the bathroom.”

He said there were likely many peaceful protesters who went into the building and immediately headed for a public restroom.

Carter said that when he got back to his hotel room and saw the video of the riot at the Capitol, he was convinced that many were not associated with the peaceful group he saw at the Trump speech.

He now believes theories that antifa, or anti-fascist adherents, infiltrated the crowd and touched off the violence.

“There’s evidence starting to come out that it was antifa that broke in and then I think the patriots then went behind them to find a bathroom,” he said.

“You’re going to see this come out on social media. I’m telling you there was no place to go to the bathroom, no place.”

Antifa is a loose-knit ideology that is one of Trump’s frequent targets.

An article published by the right-wing Washington Times said a firm called XRVision used facial recognition software and identified two people linked to antifa and a third had been seen at climate and Black Lives Matter protests.

However, XRVision executive Yaacov Apelbaum told The Washington Post the firm analyzed some footage and found two people affiliated with Maryland Skinheads and the National Socialist Movements and a third was a supporter of the far right wing QAnon conspiracy theory.

QAnon holds that Satan-worshipping pedophiles are running a global sex-trafficking ring and plotting against Trump.

After the long walk back to Union Station, Carter finally found a restroom and then sat on a cold marble floor and ate the lunch he packed.

He decided he would go back to the Capitol.

“I get up — this is the truth, you’re talking about a 68-year-old guy — I get up and I was so stiff from sitting on that floor I thought ‘If I walk over to the Capitol, I don’t know if I’m going to make it back,’” said Carter, a former building contractor who runs the Ask the Builder website — www.askthebuilder.com

He took the subway back to his hotel and drove back home Thursday.

Video and photos from Tim Carter’s trip to Washington:

LACONIA — Former State Reps. Charlie St. Clair, a Democrat, and Dennis Fields, a Republican, differ on some issues, but they agree on one thin…

When the bottomfeeders call you a traitor, you know you're doing something right.

I'm a retired Federal Employee who worked for 32 years in the DOD supporting our Military, and I have nothing but distain for idiots like Tim Carter.

Anyone who believes in what he labeled Conspiracy Theories pushed by Donald Trump, Rudy Giuliani, Trump Junior and the rest of the morons in the Republican Party are complicit in the murder of a fellow Federal Employee and should be prosecuted for inciting violence and insurrection against our country.

I hope Tim gets arrested for a minimum of tresspassing, but I'm sure by lisening to his account there is a lot left out, and there is absolutely no evidence other than what Fox News has been saying about Atifa being there at all, but there is plenty of evidence that this was all planned and initiated by Trump supporters, White Supremacist Groups, Anti-Semitic Groups, White Militia Groups, the Proud Boys, QAnon supporters and that's who Tim chose to be involved with in his foolish participation.

This is a disgraceful day in American history and a dark chapter in our democracy that should in no way be celebrated.

a retired federal employee with the spelling acumen of a 6th grader who didn't pay attention in school.

It's nitwits like you that don't really understand what is meant by integrity and morality, nor the Constitution.

It's pathetic morons like you who should have spent a little more time in school and learn about the history of this country, and what is meant by Public Service and Decency; it's pretty clear that you are of limited intelligence and cognitive skills, so I will pity your ignorance.

yes indeed, you are the worst of them.