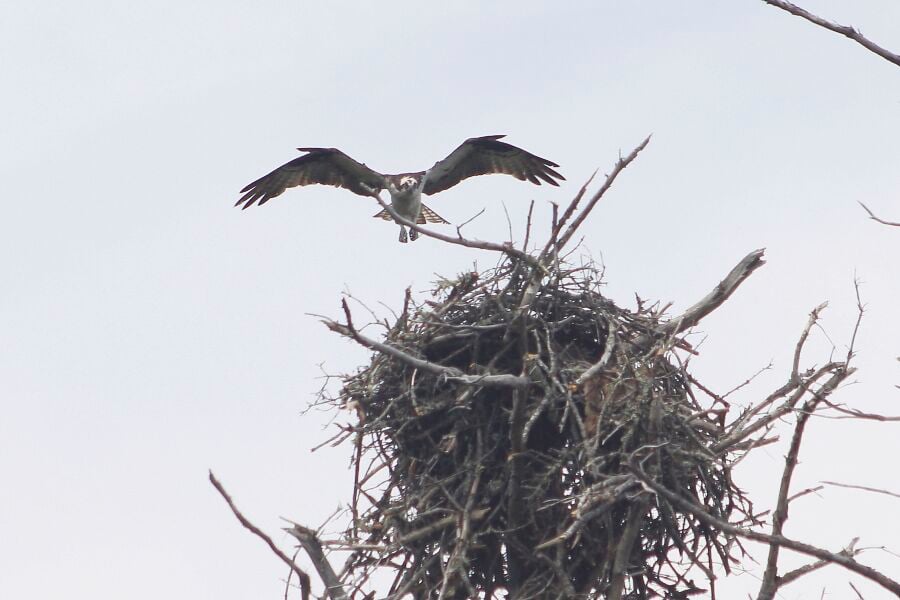 Nest are often in a top of a tree  or a utility pole. 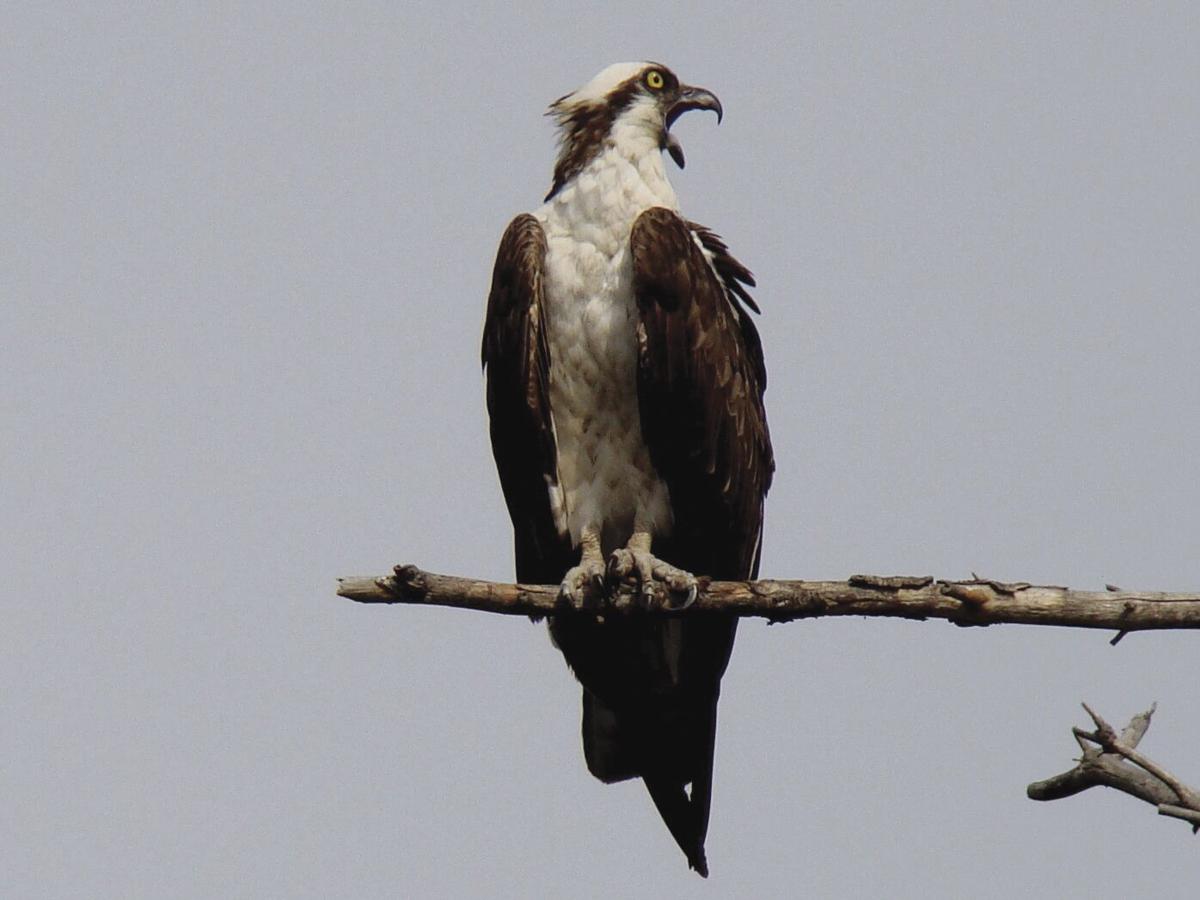 Nest are often in a top of a tree  or a utility pole.

As fall progresses more and more of our summer birds are leaving New Hampshire on their way to their winter homes. The humming birds have already left, flocks of ducks are gathering on our lakes as they move southward, and perhaps the most visible of all, the large V-pattern of the Canada goose can be seen — and heard — as they fly overhead.

One of the most remarkable annual journeys is that of the Osprey. The osprey is one of our larger raptors, large enough to sometimes be mistaken for a bald eagle due to its white head, even though with an impressive five-foot wingspan it’s quite a bit smaller than an eagle. In flight an osprey can be identified by a noticeable bend in middle of the leading edge of its wing.

The osprey lives almost entirely on fish that it catches by diving into the water — which is how it got its alternate name of “fish hawk” — and it has a unique method of doing this. It will soar over the water with its keen, yellow eyes searching for fish below the surface. When it sees its prey it will fold its wings and dive at high speed head first towards the water. But just before reaching the water it pushes its feet out in front, crashing into the water with its talons open, positioned to grab the unsuspecting fish. Osprey can dive up to three feet deep to catch they prey, unlike an eagle which usually swoops along the surface, just dipping its talons in the water to snatch out its prey near the surface. An osprey is not always successful in it dive, but it is persistent. I’ve seen an osprey make three dives in succession before coming up with its dinner.

After catching its prey the osprey will take off, give a good shake like a dog to release the water on its feathers and make it easier to fly. It then has the smarts to turn the fish sideways in its talons so the fish is facing head first which reduces air resistance as it flies. I’ve seen osprey carrying pretty large fish, up to 18 inches in length.

Osprey usually build their nests in rather remote locations but they are easy to recognize if you see one — they are quite large, up to six feet across, made of a jumble of intertwined dead sticks and branches. They will return to the same nest year after year to raise their young, which brings us to their amazing feat of migration.

The Lakes Region Osprey will travel, twice a year, some 3000 miles from New Hampshire all the way to South America, and back again in the spring. It’s not an easy trip, and they don’t always make it; a strong storm for example can blow them off track. They start leaving New Hampshire in September and work their way down the east coast, stopping along the way to feed here and there to build up their reserves for the upcoming long leg. It may take as few as four days to reach Florida. From there they fly across the ocean to Cuba, then to the Dominican Republic, before embarking on a many-hour, 400 mile flight across the Caribbean Sea to South America, the most treacherous part of the trip.

Scientists have mounted tiny GPS receivers that weight less than an ounce on osprey in order to track this migration, so the flight details on some of these birds are very well known. One bird that was blown off course by a storm suddenly slowed it progress considerably, much slower than it should have been flying. By watching its track they determined that it had landed on a ship! It had apparently been exhausted fighting the storm and need to rest. Sadly, this particular bird did not survive the ordeal.

Even more remarkable is that new chicks born this summer will also make this trek, and they have never seen any place other than their local lakes. They don’t travel with their parents or with other birds — somehow they just instinctively know where to go. GPS trackers placed on two siblings one summer found that, traveling separately and following different routes, both birds ended up in South America just a few miles apart, and in close proximity to where their parents spend the winter. That first year of migration is a formidable trip for the young birds and many don’t survive their maiden round-trip voyage to South America and back.

You can see the tracks different birds have taken during migration at the Squam Lakes Science Center website at nhnature.org/programs/project_ospreytrack. Look at the maps for Donovan in 2016 to see how he spent his summer on Lake Winnesquam before flying to Venezuela. You can see his tracks in New Hampshire all summer long, seeing what lakes he visited to fish. It also makes it clear where his nest is located.

If you are out on the lakes or rivers of New Hampshire, keep an eye out for their nests near marshy areas. Even more visible nests are on the ocean where they sometimes build right on top of navigation markers and buoys. And if you’re out on the water on a calm, quiet day and are startled by a sudden crash, look around to see if there’s a large bird flying away with a fish dangling below from its talons — it’s sure to be the fish hawk.