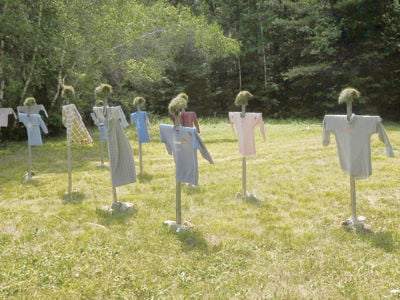 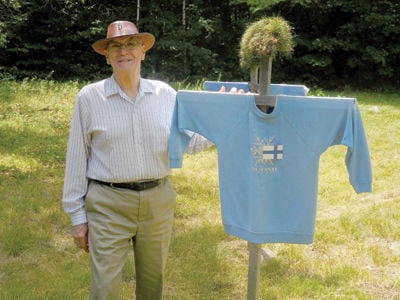 The Silent People of New Hampshire

By Gordon DuBois with Charles Westen

Several weeks ago, while hiking in the Belknap Range with friends Tom and Karen Barker, we suddenly came into the company of an unusual group: Life-size stick figures dressed with shirts and hair pieces! It was a strange and startling moment. We spent some time examining them and became more and more curious as to why and how this display was placed in this location. Conversation about it filled our return to the trail head. I wrote about the event in a recent column on hiking in the Belknap Mountains and asked anyone who knew of this field of stick figures to contact me.

Well, a few days later I received an e-mail from Charles Westen, the owner of the property, reporting that he and his late wife, Sandy, co-created the group. I immediately got back to him and set up a time to meet. I was intrigued with the scarecrow-like figures and wanted to learn about their origin and significance. I drove to Westen's home in Alton and learned the fascinating story.

Westen welcomed me warmly and we proceeded to the field where I was properly introduced to The Silent People. They were dressed in their finest gear and had newly created sod heads. We toured the property then returned to the main house where the full history unfolded.

Westen was born and raised in Marquette, in the Upper Peninsula of Michigan. He proudly refers to himself as a "Yooper." (If you're not familiar with the term, a Yooper is someone who is from or lives in the Upper Peninsula of Michigan. After The "Mighty Mac" Mackinac bridge was built, that crosses the Straits of Mackinac and connects the Upper Peninsula with the Lower Peninsula, the Yoopers have given the Lower Peninsula folks the name "Trolls," because they live below the bridge). Charles met Sandy while they were college students, she at Finlandia University in Hancock, Michigan, and he at Northern Michigan University in Marquette. She being of Finnish descent and he of Swedish. They were particularly drawn to their inherited traditions. Charles left public education to work for Ford Motor Company and after retirement from a very successful career, he and Sandy moved to Alton, New Hampshire and built their home near Hill's Pond.

In 2002 they traveled to Finland to visit Sandy's cousin, Seppo. It was during a road trip through rural Finland, on Highway 5, outside Suomussalmi, they came upon an open field with over 1,000 life-sized dressed stick figures. They had met The Silent People, created by the versatile Finnish artist, Reijo Kela. They were awestruck by the sight. It appears the display was inspired by the thousands of Finnish soldiers who were killed defending their homeland in the Russo-Finnish War of 1939-40, in an attempt by Stalin to take control of their country. The Finns fought valiantly. Members of Sandy's family gave their lives in the conflict. The Silent People took on a deeply personal meaning to Sandy and Charles.

When they returned to their home in Alton, they were moved to create their own silent people, not only to commemorate the Finnish history but also to protest the decision of the United States to engage in the Iraq War. Charles stated that Sandy had what is called "sisu." Sisu is a unique Finnish concept that can be roughly translated into English as strength of will, determination, perseverance and acting rationally. In 2003, Sandy fully demonstrated her sisu and she and Charles began erecting an interpretation of what had moved them deeply, and New Hampshire acquired The Silent People experience for itself. They inhabit a field once known as Joe's Field where food was grown. Now it is the site that testifies to the human toll of warfare, commemorating personal loss in the past and the tragic losses of the present.

After 13 years, The Silent People still stand in Joe's Field as a reminder. Sandy passed away in 2012 after a courageous sisu battle with cancer. Charles has moved on with his life. He is selling the property and plans to move to Tennessee.

Many people have passed through the field and stared at The Silent People: hikers, snowmobilers, and people just interested in the display. Others, like myself, just look and wonder about the meanings The Silent People suggest. I don't know what will happen to The Silent People when the property is sold. But what I do know is that I have been moved by the powerful message their presence speaks.

If you would like to learn more about the Silent People of Finland you can read their story on several websites, including, www.atlasobscura.com/places/the-silent-people.