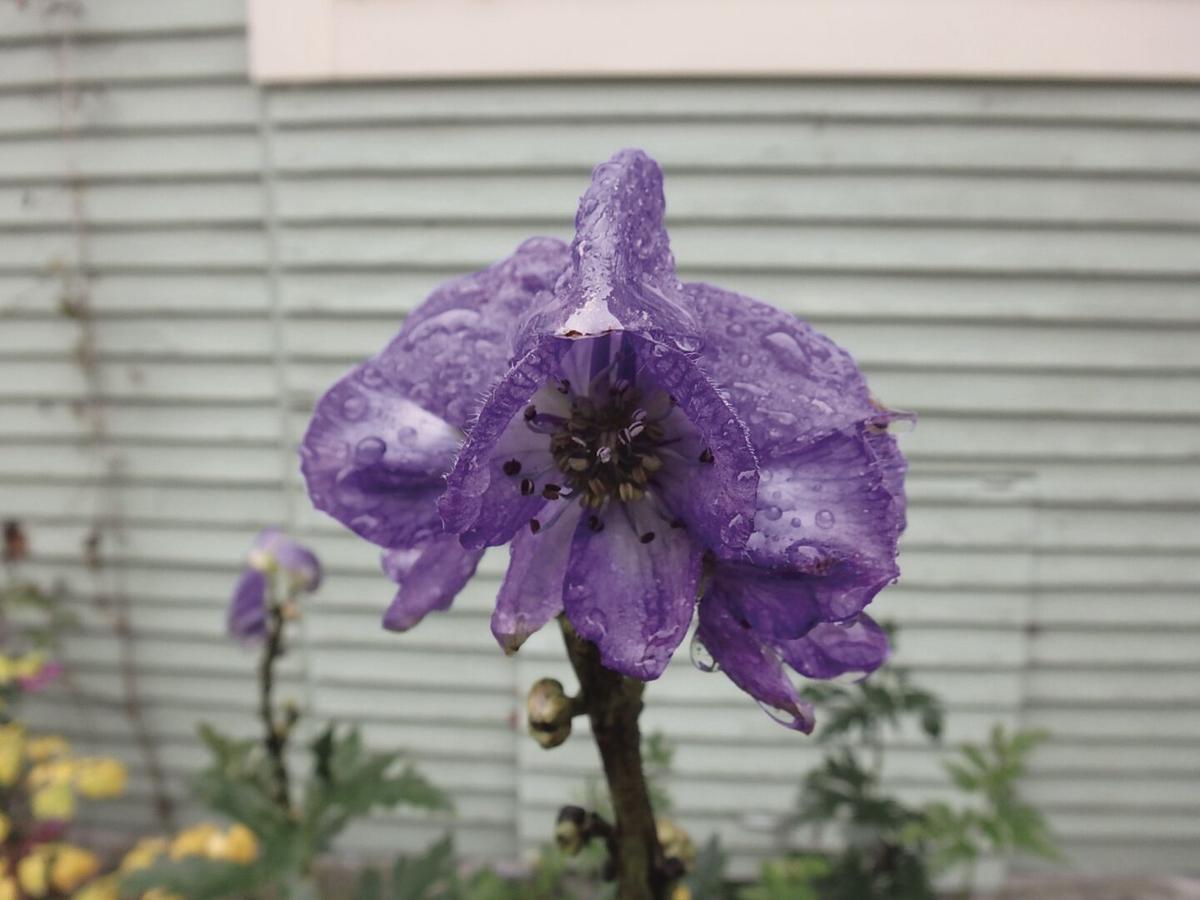 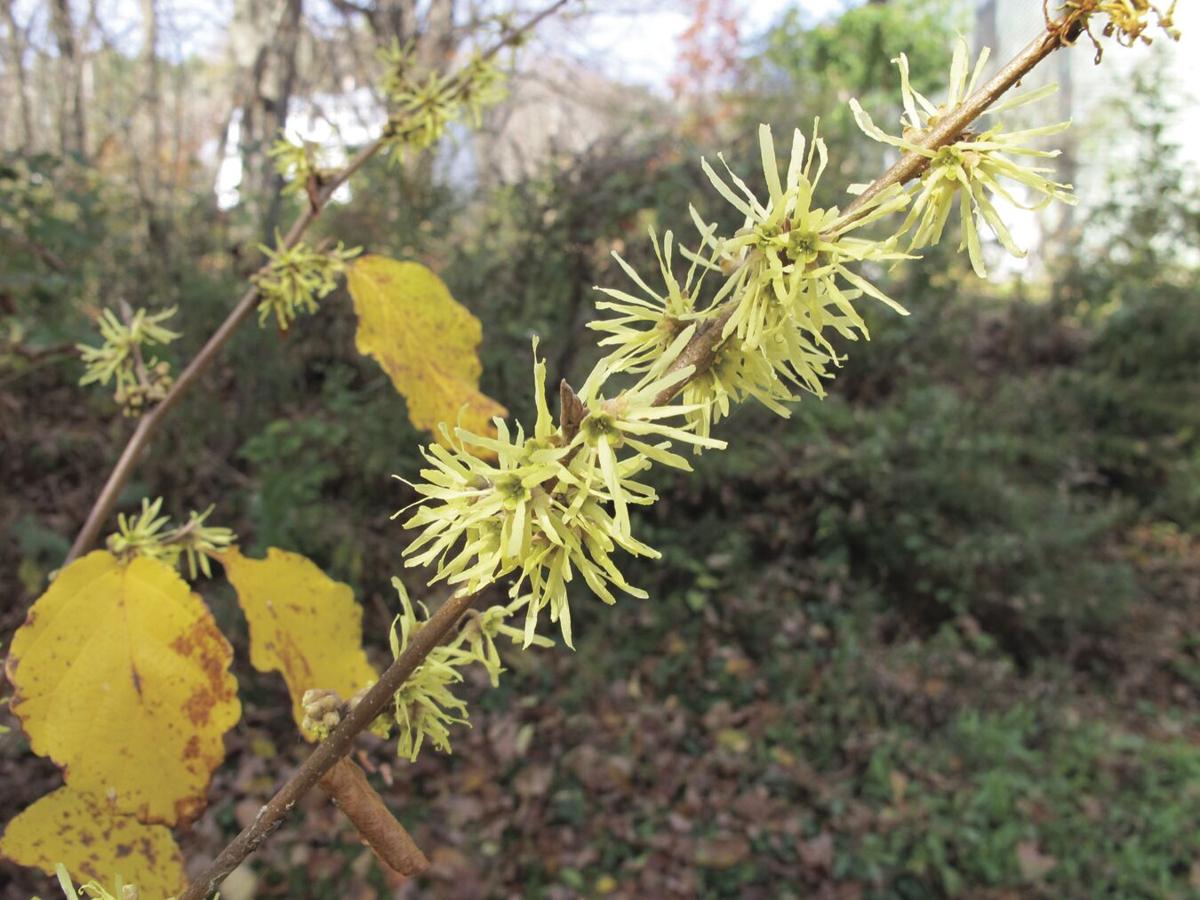 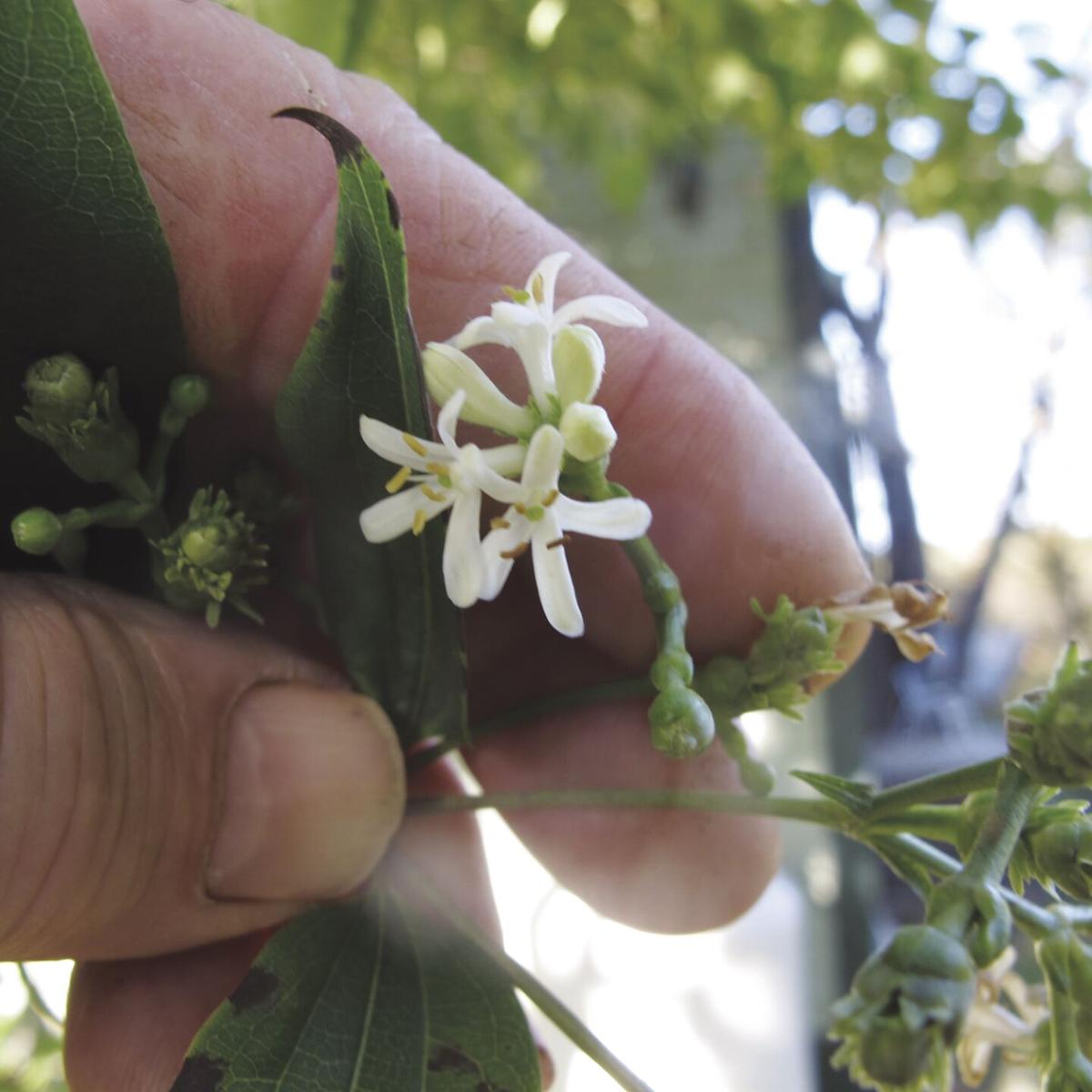 Summer has faded and gone. Autumn’s bright foliage does compensate, somewhat, for the dearth of flowers, but a few of my trees and shrubs (and several perennials) bloom in October, and I treasure them. Let’s take a look.

Starting in early September, but varying greatly from year to year, my Seven-Son Flower Tree (Heptacodium miconioides) blooms. This year, in early October, its white flowers were in bloom, despite four hard frosts. Some years even one frost will ruin the blossoms, but not this year. The flowers are white, small (half-inch in diameter), and borne in clusters of flowers mostly near the top of the tree.

After the blossoms finish, the tree will often display small, purplish-red fruits (½" drupes) crowned by very showy, rose-pink sepals which elongate after bloom and can last into late fall. But frost usually interrupts that display in colder parts of our region.

The Seven-Sons Flower tree is typically a small one. Most sources refer to it as 15 to 20 feet tall and 8 to 10-feet wide. But it is fast growing, and can produce branches 5 to 8 feet long in a single season once it is well established. It has interesting bark — gray and dusty brown, variegated and exfoliating. In winter the bark stands out well against the snow.

Although this small tree was introduced to the United States from China in 1907, it was not readily available until it was re-introduced in 1980. I’ve had mine for more than 15 years and have not noticed any seedlings or root sprouts. I am always on the lookout for invasive tendencies for newly-introduced species, but this one has given me no reason to worry.

A lesser-known shrub that blooms for me in October is disanthus (Disanthus cercidifolius). This shrub likes rich moist slightly acidic soil in part- to full-shade. It is a polite shrub — it does not spread out and take over the area, and rarely needs pruning. During the summer is has nice dark green leaves similar to those on a redbud tree. But in fall the leaves turn an intense reddish purple and hold on well into the fall. I think the leaf color is better than that on burning bush, which is an invasive and no longer sold.

The blossoms on disanthus are tiny, and I didn’t even notice them for a couple of years after planting mine as they are right on the branches, and obscured by leaves. But it is fun to have something special to look for now, in autumn — and to show to friends. Mine haven’t appeared yet, but should appear soon.

Then there is the witchhazel tree (Hamamelis virginiana). I remember the first time I encountered one. I was hiking in late October, and came upon a native tree covered in yellow blossoms. Although the blossoms were small, it had petals that were curly and bright — and I was not expecting anything to be blooming.

So of course I had to have one. The foliage turns yellow in September, and holds on, obscuring the blossoms a bit. But eventually the leaves drop, exposing the flowers. There are also early spring-blooming varieties as well. ‘Arnold’s promise is a nice one with red and yellow flowers.

Although I have never seen pollinators on the flowers, they are fragrant and brightly colored, so I assume they are trying to attract something. The only source for information I have found on this comes from Bernd Heinrich in a 1987 Scientific American article. He witnessed the night-flying owlet moth feeding on the nectar and pollinating the flowers in November when most other insects are no longer around.

Of the garden flowers blooming now, you must have seen big, bold New England asters and perhaps some of the more shy wild woodland asters. Some of my phlox are still blooming, as are some black-eyed Susans. Of those, a Rudbeckia called ‘Henry Eiler’ is the most dramatic. Over five feet tall, it will bloom all month in a huge clump. I just wish I didn’t have to tie it up to keep it from flopping.

I have an absolutely stunning goldenrod (Soldiago rugosa), a cultivar called “Fireworks.” It is one I purchased several years ago and it is now a nice tight clump 4 feet across and 3 feet tall. The blossoms arch over gently, and point in different directions, creating a stunning display, a little like the finale of a good fireworks display. Unlike wild goldenrod, it does not seem to spread quickly by root or seed.

Also in bloom for me now is Knautia macedonia with deep wine-red flowers reminiscent of Scabiosa or pincushion flower. It has been blooming for months, and is a delight. The stems are thin and tend to bend over a bit when blooming, but the blossoms never seem to fall to the ground. It is not a good cut flower, but earns its place in the garden because if its long bloom time.

Most species of monkshood bloom in June, but I also have one species, Aconitum carmichaelii, which blooms now with intense blue flowers on 5-foot stems that do not flop. All monkshood species have poisonous sap, and some were said to be used to poison wolves in Russia. Agatha Christie probably had someone use it for tea, to get rid of an annoying relative, but I don’t recommend that.

I have always tried to expand the growing season here in my cold Zone 4 garden. I should have a few blossoms into November, and then there will be a hiatus until early March when my first snowdrops bloom. But I can buy flowers for my table in winter, and I do have plenty of houseplants.

Henry is the author of 4 gardening books, a lifetime organic gardener, and a frequent public speaker on many gardening topics. You may reach him at henry.homeyer@comcast.net.

Garlic needs to be planted now

When I was growing up, my mom served meat and potatoes nearly every night. Our vegetable was peas or cooked carrots, and once a week or so we …