Radio-controlled yachts operated by members of the Back Bay Skippers will be racing this summer on the Back Bay in Wolfeboro along the Rail Trail on Tuesdays and Thursdays (and possibly some Wednesdays). Local boat dealers of the full-size variety report early-season sales are brisk even in the midst of the coronavirus pandemic. (Courtesy photo/NH Boat Museum) 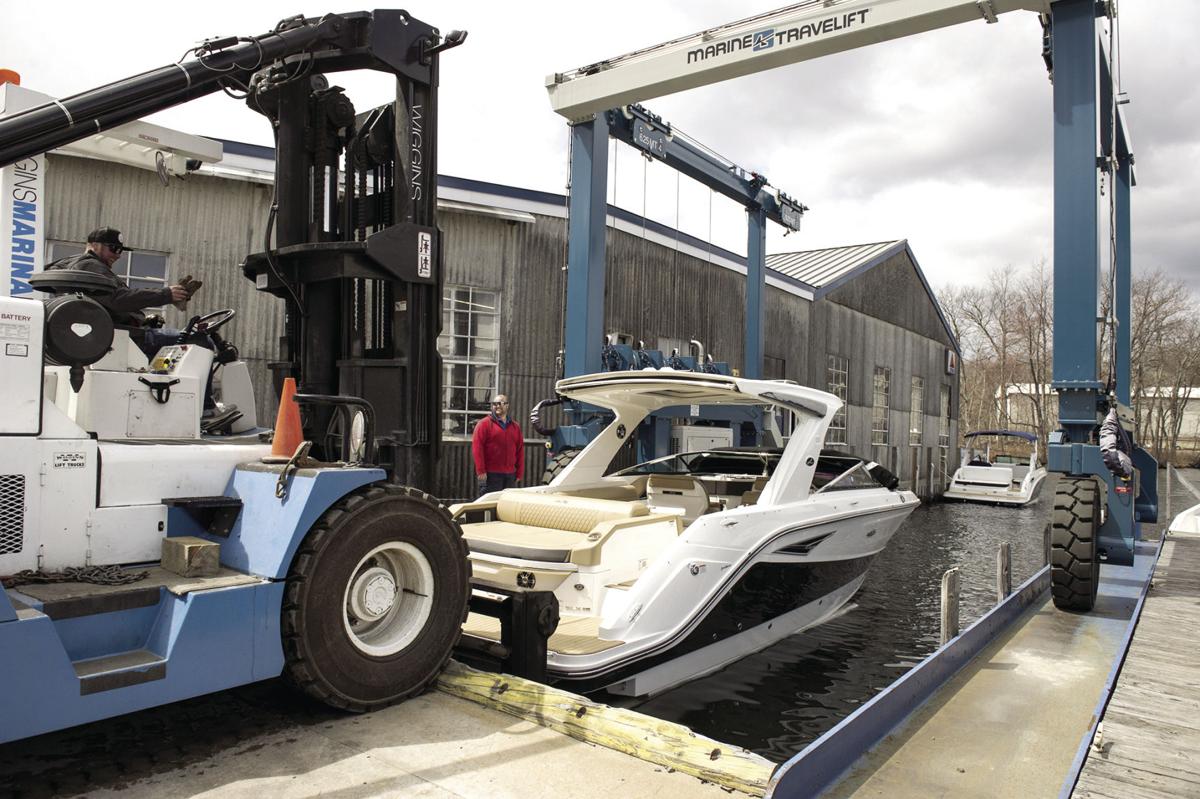 Greg Anderson lowers a SeaRay into the water at Irwin Marine last month. Boat dealers in the Lakes Region say early season sales are extremely strong despite – and maybe because of – the coronavirus pandemic. (Karen Bobotas/for The Laconia Daily Sun)

Radio-controlled yachts operated by members of the Back Bay Skippers will be racing this summer on the Back Bay in Wolfeboro along the Rail Trail on Tuesdays and Thursdays (and possibly some Wednesdays). Local boat dealers of the full-size variety report early-season sales are brisk even in the midst of the coronavirus pandemic. (Courtesy photo/NH Boat Museum)

Greg Anderson lowers a SeaRay into the water at Irwin Marine last month. Boat dealers in the Lakes Region say early season sales are extremely strong despite – and maybe because of – the coronavirus pandemic. (Karen Bobotas/for The Laconia Daily Sun)

Pandemic or not, the temperature is rising and the sunlight is dancing on the water’s surface, enticing boaters to shove off and throttle up. This year, that temptation is proving stronger than ever, local boat dealers reported. Coronavirus? Shmoronavirus.

Of course, it’s hardly business as usual at dealerships. Each sales point has its own – and often changing – set of parameters they’re implementing to protect the safety of their staff and customers, while still doing business.

It’s best to check each company’s website to see how they are operating in this unusual time, but it’s nearly universal that they are asking customers to first figure out what they want over the phone, internet or email. If and when an in-person visit is needed, customers should observe social distance and are usually asked to wear a face covering.

New boat deals can be all but finalized remotely, and when customers come in for the final pre-purchase demo of a boat, they should expect personal protective equipment to be part of the experience.

Despite all of those new wrinkles, you’d think that marinas were equipped with runways and landing strips, given the way boats are flying out of the showrooms.

“We are swamped. We are understaffed and running way behind. There’s a lot of pent-up demand, we are selling boats like crazy,” said Scott Trexler, owner of Texler’s Marine on Moultonborough Neck. People have been quarantining at their lake house, and now their kids are finishing up their remote learning, so the open water has never been more attractive, Trexler said. His new and pre-owned inventory are both in high demand.

“Everybody’s looking to get out on the lake,” Trexler said.

At Irwin Marine, general manager Bruce Wright said that, while boating is usually one of the highlights of summer, this year it might be the only bright point for some people.

“I think the sentiment is that people aren’t going to be traveling, they’re not going to be doing a lot of the things that they thought they were going to be doing. Boating is a safe haven they can do with their families and not be around the things going on in the big cities. We’re seeing a very strong demand,” Wright said.

Wright said sales at Irwin have been building over the past few years, and that trend is continuing so far this year, even with a change in atmosphere at the business. Customer traffic is rerouted to enter through one door and exit through another, to manage social distancing. Once inside, customers are discouraged from lingering and socializing.

“It’s not quite as friendly a process as we’d like it to be, but customers are willing and understanding,” Wright said. That is, it’s worked smoothly so far. The season really kicks off on Saturday with the start of Memorial Day Weekend. “The weather’s going to be nice this weekend, so it will be interesting to see what it’s like with bigger crowds.”

Julie Marsh, part of the family that owns the Winnisquam Marine operations on Lake Winnisquam and at the Weirs Channel, said that she initially expected 2020 to be a poor year for sales, especially once the pandemic reached New England. Instead, it’s been something different, she said.

“Insanity,” is how she described the start of her sales season. “We can’t get enough boats. They’re going crazy to get on the water.”

Marsh said there are some dark clouds looming on the horizon, though. Her boat brands, as well as most boats sold in North America, are produced in the upper Midwest, including Indiana and Illinois, which have been under stay-at-home orders for many weeks. Boat dealers might be looking at empty showrooms this summer, until production facilities can come back online.

Marsh said her company has been trying to conduct as much business as they can outside of their buildings – be that via telecommunications channels or in the parking lot, and asking customers to limit any time they spend in Winnisquam Marine’s offices. It hasn’t been a problem so far, she said.

“We’ve been really good and proactive with communication with our customers,” she said.

The interest in boating has extended to the paddle-powered variety, too, according to Steve Bardus, owner at Wild Meadow Paddlesports in Center Harbor, which sells and rents paddleboards, kayaks and canoes.

“We’ve been actually quite surprised at the level of interest that people have. It seems like everyone’s anxious to enjoy the weather and get outside,” Bardus said. He said he’s cautiously optimistic for the 2020 season, though it hasn’t been a strong start for Wild Meadow.

“There are some real challenges. We delayed our opening for more than a month. We are limiting our hours so we can keep our staff exposure low. We are seeing a significant economic impact,” Bardus said. He said they’ve chosen to limit business hours to weekends only for now, a change he said was about protecting the health of his staff.

“We want to be very cautious as we reopen and take slow steps,” he said. Though it’s been a challenging start to his season, Bardus said he thinks he has the right product for the time.

“Getting out and paddling a boat on the lake is a great way to exercise and forget the stresses of the pandemic. It’s very easy to keep distance and do it safely, and we’ve put procedures in place for guests to stay safe if they come visit us,” Bardus said.

While the coronavirus pandemic has shuttered many businesses this spring, local bicycle shops have seen record numbers as people are stuck at …

How are your summer vacation plans likely to change as a result of the COVID-19 pandemic? How will this summer be different for you and your family? Click here to answer