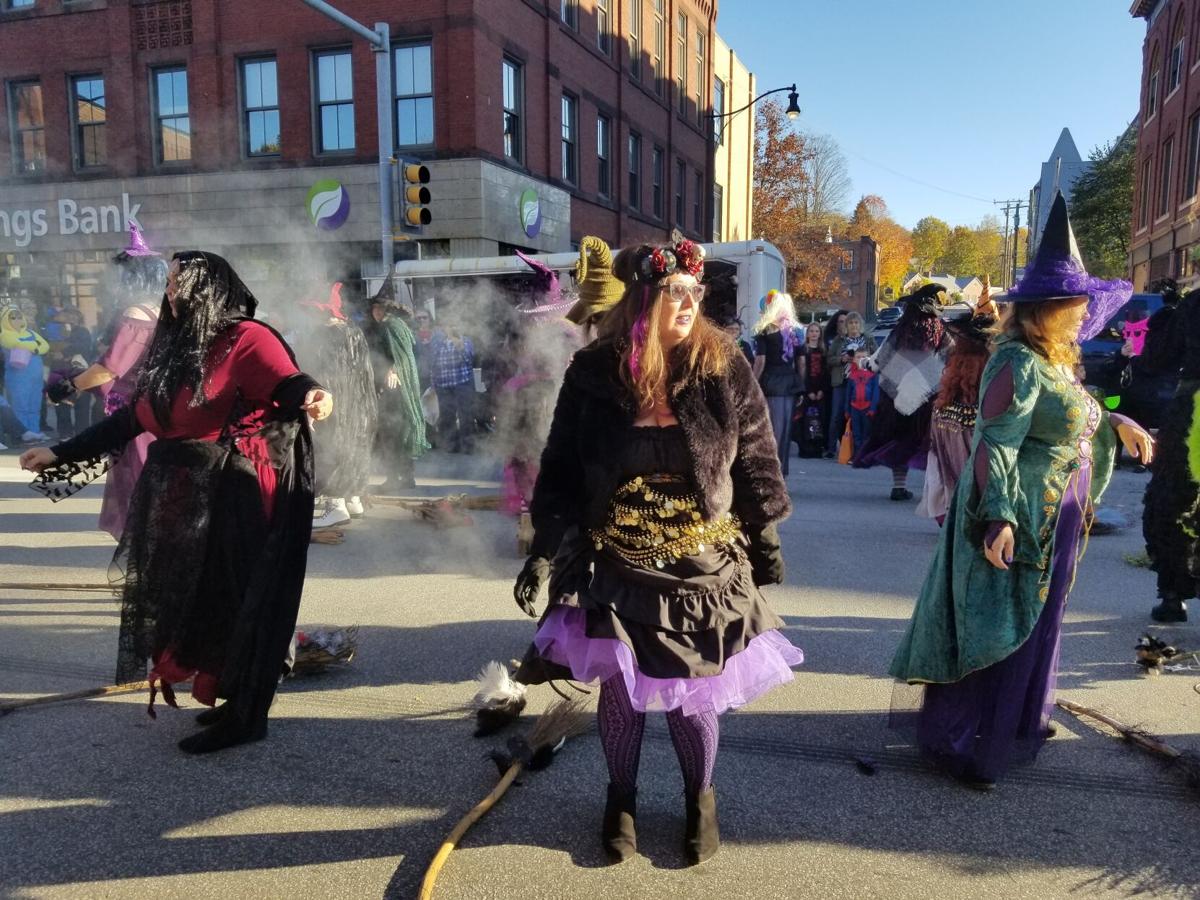 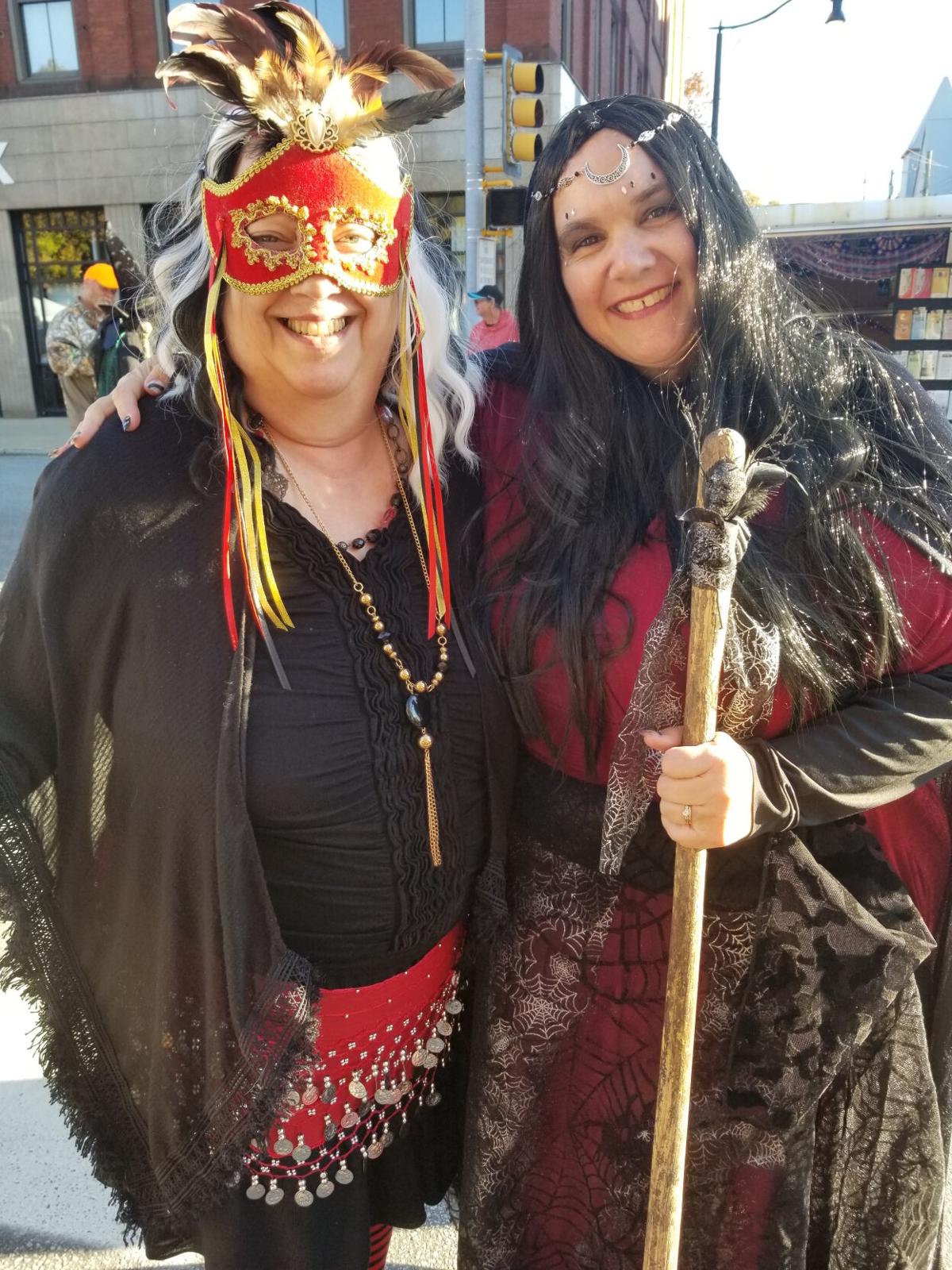 Joy Hall of Gilford and Staci LeBlanc of Laconia perform at the Franklin Fall Festival on Oct. 23, along with more than 20 other Wicked Witches of the Lakes Region. (Roberta Baker/The Laconia Daily Sun photo)
1 of 2

Joy Hall of Gilford and Staci LeBlanc of Laconia perform at the Franklin Fall Festival on Oct. 23, along with more than 20 other Wicked Witches of the Lakes Region. (Roberta Baker/The Laconia Daily Sun photo)

In the weeks before Halloween, you may not always detect witches milling in a crowd.

When the Wicked Witches of the Lakes Region gather around a cauldron and start dancing to “Shake Your Bacon” in the street, a city park or on someone’s front porch, the coven is hard to miss, and just about impossible to resist.

“I’m going to Home Depot to sit on a riding lawn mower for a picture of me upgrading my broom,” said Kathy DeNutte, 53, of Belmont, who founded the troupe this summer — years after she saw a motley coven shake their stuff in northern Germany.

“It’s liberating. You have a costume and a mask on. We’re all witches dancing for fun,” said Karen Deighan, 53, of Center Ossipee.

It’s also a form of sisterhood with a lineup of local bookings for pretend-witches to let loose.

Since August, when roughly 35 women in their late 20s to age 70 convened to learn a bewitching routine and perform in costumes they made themselves, their popularity has exploded, along with their Halloween gigs and dance moves. They’ve hired a dance instructor and drive between events where they break out en masse, eliciting grins and wistful gazes wherever they converge.

“It’s so much fun. It’s a ball,” said DeNutte, who posts photos of their performances online. “We show up someplace and people just stare at us,” she said. “We have a cauldron that smokes.”

At community events they have become instant celebrities, posing for pictures with children of many ages, and passing out trick or treat candy.

“I think they’re something,” said Franklin resident Sean Effhimiou at the city’s fall festival on Oct. 23, where the group danced in front of Franklin Savings Bank. “Didn’t they used to burn witches? A town in Massachusetts, wasn’t it? I think they’re great.”

Four or five years ago DeNutte watched an online video of mostly middle-aged women in Germany dressed as witches, doing spontaneous public performances of what has come to be known as The Witch Dance. “I must have watched the video 50 times and tried to do the dance in my living room,” she said. On Facebook she asked if anyone else would like to learn. She got 60 responses. The 35 who currently practice and perform are clearly smitten.

“Dancing makes you happy. I love the camaraderie,” said Tami Lafirira, 59, of Loudon.

“I had no dance background. I’ve never taken dance lessons in my live, even as a little girl. It’s much easier to do a dance like this when you’re in costume,” said De Nutte. Everyone is an amateur, dancing way out of their comfort zone.

Most of the witches hail from Laconia and Belmont, Gilmanton and Gilford. Two drive 45 minutes to come to class.

Word of the coven has spread like sparks from wand.

So far, the crew has performed at businesses, elementary schools, Veterans Park in Laconia, the VFW in Laconia, Meredith’s Trunk or Treat in Prescott Park, Laconia’s downtown train station, Franklin’s Fall Festival, and on demand for parties and Lakes Region community events, including trick or treating in Sanbornton. They’ve hit Tanger Outlets, the Belknap County Nursing Home, the Taylor Community, Meadow Ledge Farms in Loudon, and Beans and Greens and Stone Brook Hill farms in Gilford.

It’s been a marathon to keep up. Now there’s a wait list to become a dancing witch. “We’re going to teach new people. That way we can do twice as many events next year,” said DeNutte.

The troupe is open to anyone, any age, no experience or body type required. Kathy LaRoche of Dancing Feet Studio in Laconia is choreographing new minutes-long routines to a fluctuating group, which currently rehearses Tuesdays and Thursdays after work and Sundays around 5 p.m. at the county fairgrounds. Not everyone goes to every gig, but practice and weekend performances provide a hefty dose of aerobic exercise. “I’ve lost 35 pounds,” said DeNutte.

Members have an unmistakable satisfaction that carries them through the week.

“As women, we could all use a sisterhood. It gets most of us out of our comfort zone,” said Melissa Thurston, 37, of Laconia. “It’s been my thing to be a witch every year.”

“We just crashed into Gunstock and started dancing,” said Joy Hall of Gilford, who turns 60 in December. “I always wanted to do something like this.”

The Belknap County Fall Festival was created as a performance venue for bewitching group, which enjoys descending on a crowd and dancing unannounced. Tomorrow's event at the fairgrounds, located at 174 Mile Hill Road in Belmont, will include pumpkin carving, a scarecrow contest, hatchet throwing, a frying pan toss, a kids’ costume parade, 4-H club booths, and a petting zoo. The pig roast and chicken barbecue starts at 12:30 p.m. and costs $10 per plate. Admission to Saturday's festival is $5 per carload.

It has come to my attention that the people who do not celebrate nor participate in Halloween have it basically crammed down our throats regardless everywhere we look and go. Not only that we are treated as if we refuse to wear the obedience face mask and get the Covid jabs. Why does the news media ignore us or refuse to do news stories on those of us who want nothing to do with Halloween? Are they afraid of the advertisers getting upset or is it just that they are not doing fair and balanced news coverage anymore? The National Retail Federation revealed 35% of consumers are not participating in or celebrating Halloween. Where is our right to be heard and our reasons respected?