Carrying 80,000 pounds of water, the driver of a tanker truck had a few seconds to consider his options when his brakes failed while he was descending Route 3 into Meredith Village. He tried to turn in to the Hart's Turkey Farm Restaurant, likely avoiding a catastrophe further downhill. (Adam Drapcho/The Laconia Daily Sun) 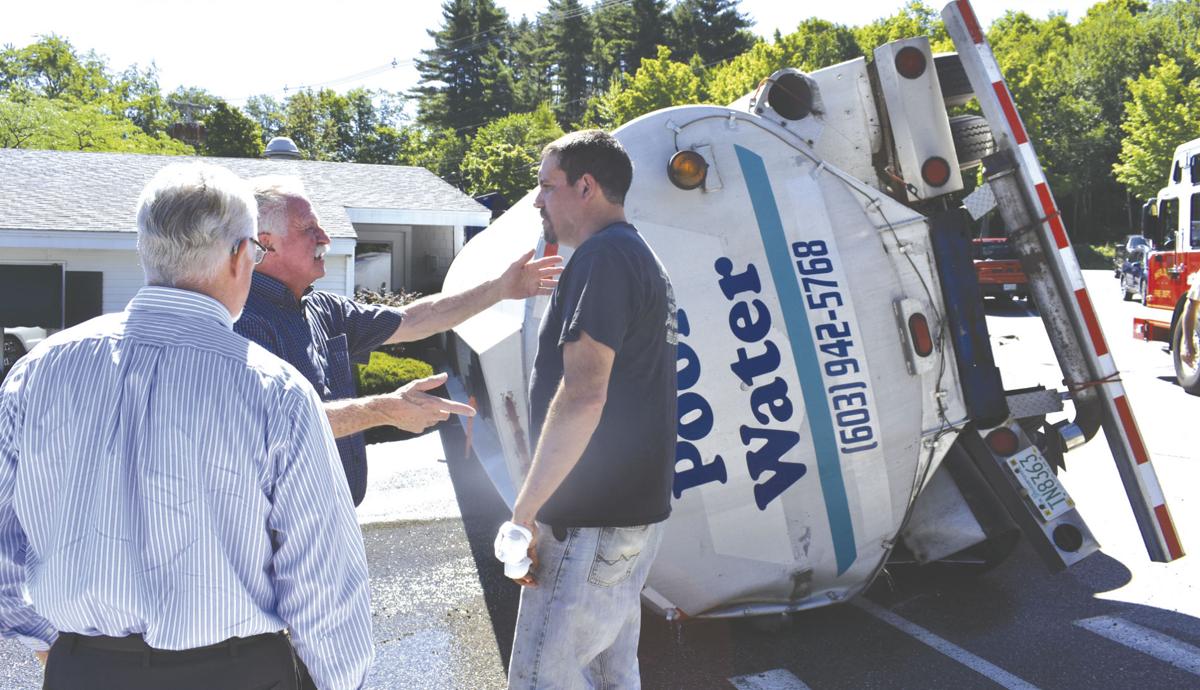 Carrying 80,000 pounds of water, the driver of a tanker truck had a few seconds to consider his options when his brakes failed while he was descending Route 3 into Meredith Village. He tried to turn in to the Hart's Turkey Farm Restaurant, likely avoiding a catastrophe further downhill. (Adam Drapcho/The Laconia Daily Sun)

MEREDITH — A truck driver said he had just a few seconds to decide how to react when he unexpectedly lost his brakes while descending Route 3 toward Meredith Village on Friday morning. He decided to make a hard right turn into the parking lot of Hart’s Turkey Farm Restaurant, rolling the truck onto its side in order to avoid a tragedy.

Bert Rollins, owner of H.L.R. Trucking Company, said he had driven through the Meredith Traffic Circle and was proceeding downhill on Route 3, intending to turn left onto Route 104. When he put his foot on the brake pedal to wait for a break in traffic, the pedal went to the floor without slowing his truck, which was carrying 80,000 pounds of pool water. He said he was only going about 15 miles per hour when he lost his brakes, but he was looking at a long descent in front of him, at the bottom of which was the village of Meredith.

He didn’t want to know how fast he would be going by the time he got to the bottom of the hill.

“I put it in the lowest gear I could and tried to get in here,” Rollins said, speaking from the Hart’s parking lot. He was able to steer the cab and tanker off the road before the weight of his load caused the truck to roll on its side, causing some damage to the restaurant’s building and leaving Rollins with lacerations on one hand but avoiding what could have been a far more dangerous collision.

Rollins, who lives in Nottingham with his girlfriend, three sons and one step-son, said he has been driving trucks for more than two decades. “I’ve never been in a truck accident in 21 years. I literally rolled this truck so I didn’t kill anyone.”

“I am glad nobody was hurt. I can replace the truck,” Rollins said.

Russ Hart, of Hart’s Turkey Farm, said the crash occurred just feet from where he was standing inside the restaurant.

Hart felt fortunate that he was unhurt, the driver  survived, and that the truck wasn’t hauling anything dangerous. Despite minor damage to his building, Hart expected the restaurant to open for service later that very day.

Deputy Fire Chief Andre Kloetz said that the damage to the structure was limited to the gable end of an entrance alcove, which can be closed off to diners until it can be repaired.

“That shouldn’t keep them from opening. If this was gasoline or propane, it would be different,” said Kloetz.