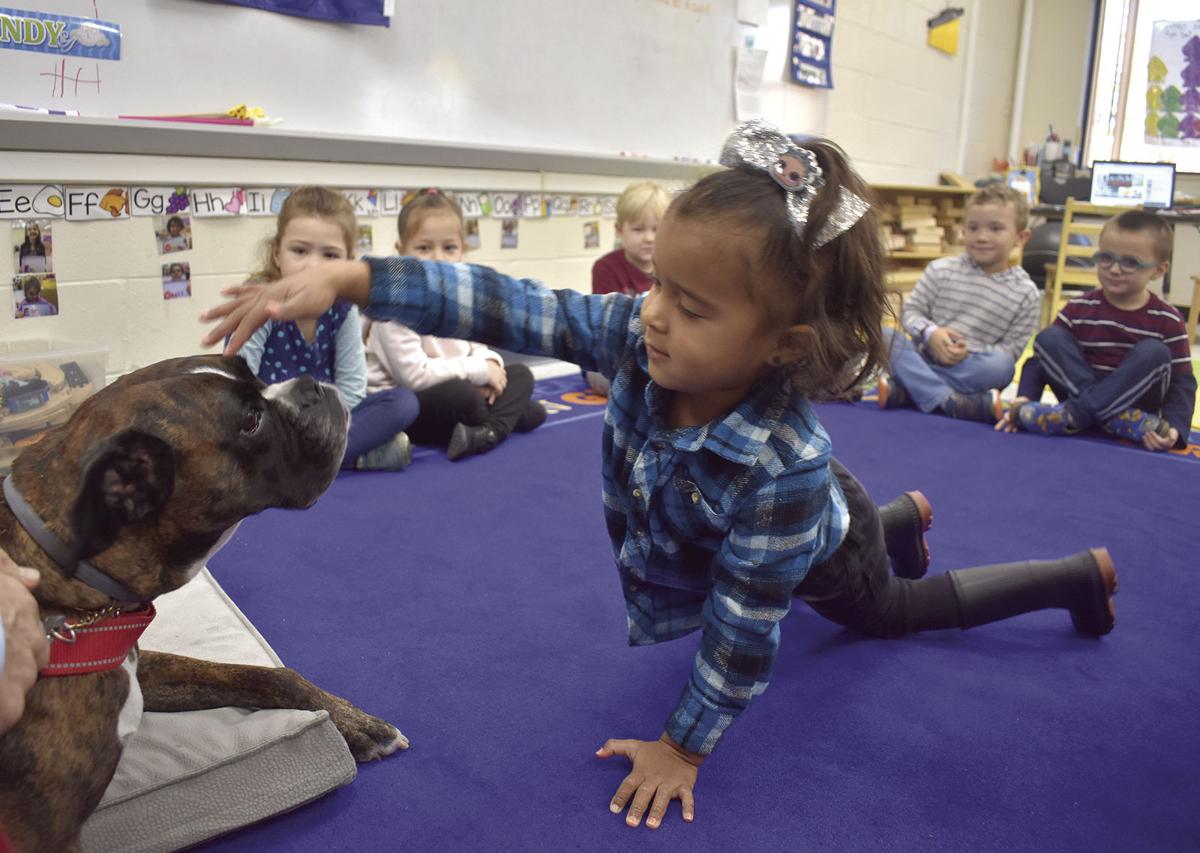 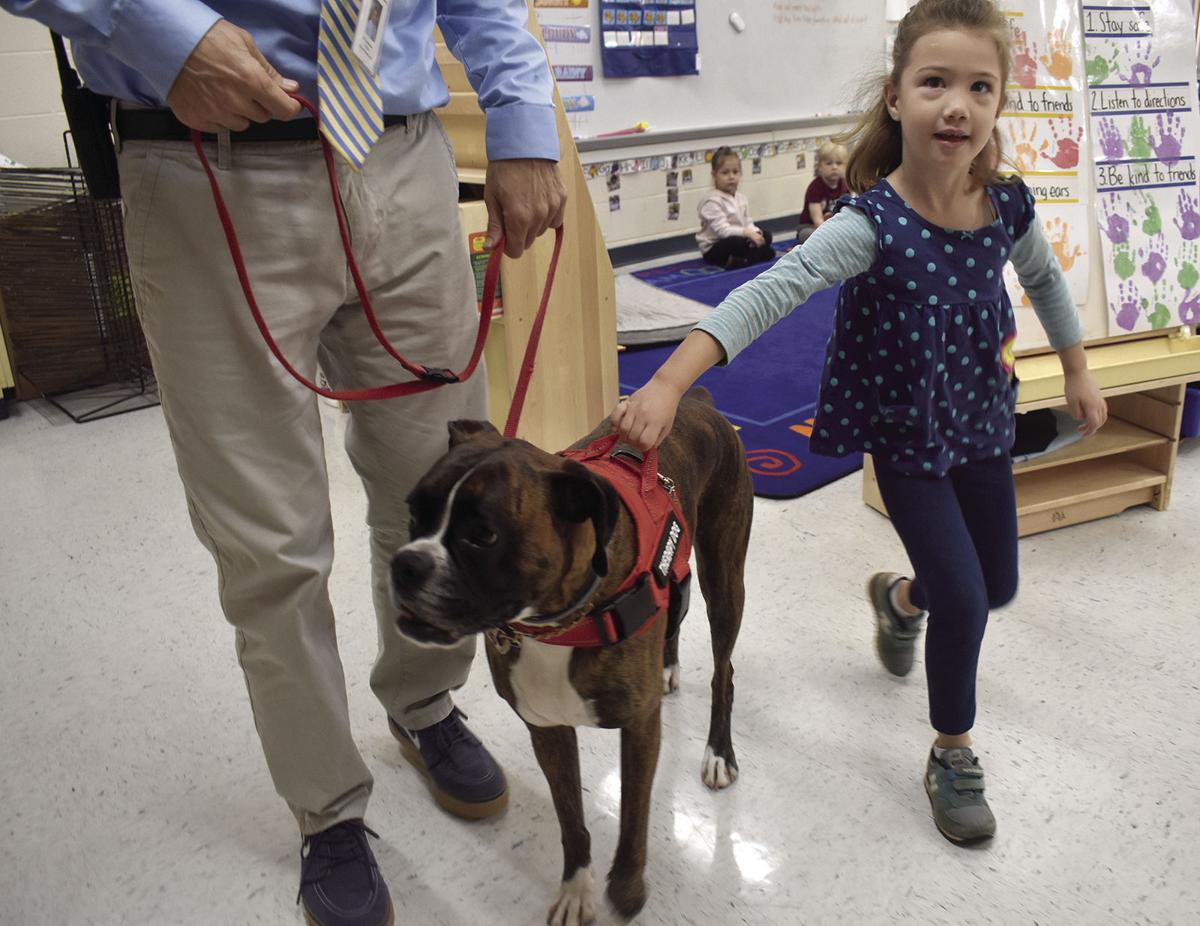 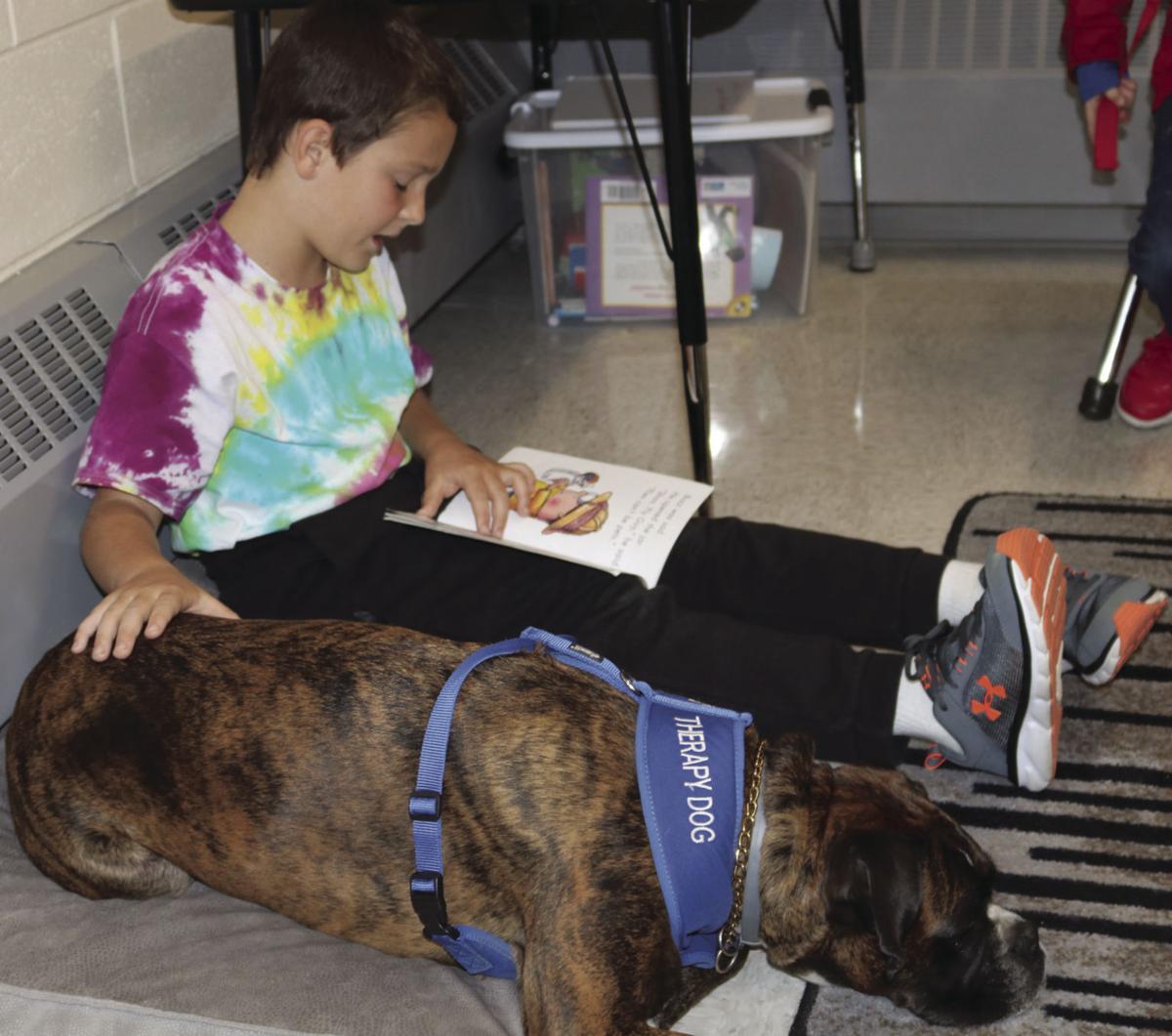 LACONIA — As principal of Pleasant Street Elementary School, David Levesque receives a trickle of letters from children — and a bounty of feel-good moments that brighten his day and fuel his mission.

Perhaps none are as moving as the smiles prompted by Remi, Levesque’s 5-year-old boxer, which he trained to work as the school’s therapy dog.

At any time, Remi may be called to respond to behavioral incidents in the classroom that teachers can’t diffuse single-handedly. Led by Levesque, the boxer brings a dose of calm to children whose emotions run high from anger or pent-up frustration, who may feel overwhelmed by activity and stress, or besieged by taunts at school or trauma at home, which can lead to a geyser of acting out.

Sometimes, Remi is simply a non-threatening connection for children who are withdrawn.

Last week, Remi and Levesque answered a call from a staff member who was unable to coax a kindergartner back inside after recess. Levesque walked onto the playground with Remi, wearing her bright red therapy dog vest with a handle just the right height for a child. “Would you like to walk Remi back inside?” he asked. The girl, huddled in front of a school door, beamed and studied her new visitor. Then she hurried over to grab the vest handle. Grinning and standing tall, she walked Remi through a warren of corridors back to her class, past a line of older children who looked more than a little bit envious.

Next, a kindergartener visited Levesque after asking her teacher if she could read to Remi. Katherine Ewig, age six, sat beside the boxer on the dog’s bed in principal’s office, while Levesque helped her sound out sticky words.

After she finished reading her primer, “A Firefighter,” she said, “Good job, Remi.” Katherine led Remi to her classroom with Levesque walking close by. “It’s OK, Remi, I got you,” she said, leading the dog around a corner. “Look out, Remi. My classroom is right over there.”

“Who’s your friend, Katherine?” asked the teacher waiting at the door.

“OK, Remi. Bye,” she said, patting the boxer. “I have to go outside with my class now.”

“Katherine opened up just walking her,” said Levesque. “If that was just me and her, we wouldn’t have said two words walking down the hallway.”

It was day three of Remi’s job as chief diplomat at Pleasant Street School — an addition that may transform school culture.

Across New Hampshire and the U.S., schools and mental health professionals are scrambling to find ways to increase emotional resilience and connectedness among young children, in the wake of sobering data. According to 2017 surveys by the Centers for Disease Control, youth suicide is increasing fastest among youngsters ages 10 to 14. The numbers are still small, experts say, but they indicate a disturbing trend — and sound an alarm to address mental health, emotional regulation and coping skills at earlier ages, as soon as children are developmentally able to understand.

Families, schools, and communities need to be part of ongoing, integrated mental wellness and suicide prevention efforts that don’t cease when government funding runs out, said Joan Asarnow, a psychologist, youth suicide researcher and a professor at UCLA. She is also director of UCLA’s Youth Stress and Mood Program and the SAMHSA Center for Trauma Informed Adolescent Suicide, Self-Harm and Substance Abuse Treatment and Prevention.

“We need to strengthen protective forces within the family and community,” she said. “We need to provide protective mental health seat belts for our kids.” Mental illness needs to be regarded as a serious illness and public health threat — potentially as serious as cancer, Asarnow said.

She said the therapeutic effect of comfort dogs at youth mental health treatment centers has been astounding, especially when the children are given pet care responsibilities. “Sometimes a pet can make a difference in ways a human can’t."

Remi is New Hampshire’s second on-site comfort dog to work “on staff” at a public school, according to administrators familiar with wellness programs around the state. So far the gentle and affectionate boxer has been a reward for good behavior, a transition to talking about what happened that made a child misbehave, a way-station for calming and resetting surging emotions, and a bridge for shy youngsters who become animated when speaking to a non-judgmental pet.

Remi and Levesque have already received welcoming letters, valentine-like notes and colorful drawings of the boxer from admiring children. Levesque said he is going to track absenteeism and student behavior referrals to the principal’s office to see if there’s a reduction on days Remi is on the job.

“She’ll lay on the carpet and be part of the culture here,” Levesque said. “The whole vibe of the building changes when she’s here. It helps kids emotionally regulate.”

Pet therapy is a tried-and-true treatment in mental health — and is increasingly popular in health care and police work. Animals, including robotic cats, visit dementia patients in New Hampshire nursing homes to provide peace, social connection and a loving relationship for people disabled by memory-robbing disease.

For the past two months, Miller, an eight-month-old yellow Labrador retriever, has accompanied Franklin Police Officer Kristin Tracy on calls to car accidents, crime scenes, and homes where children have witnessed domestic violence or death. This fall she brought Miller to comfort children who had attempted suicide at the start of the school year.

“He serves as a really good distraction. It’s that instant connection,” shown by research to lower anxiety and blood pressure, Tracy said. “The victims are able to calm down in order to formulate words to tell us what has happened. For kids, it lets them focus on the dog instead of the crazy stuff that’s going on in the home.”

Tracy brings Miller to Franklin schools, both as a comfort animal and a police department emissary. “They get so excited, and shout, ‘It’s Miller, Yay! It’s hugs. It’s petting. Just the difference that makes. It translates to when we’re out on patrol,” helping to build friendly connections in the community that might take a lot longer to forge.

Anna Parilla, principal of Clark-Wilkins Elementary School in Amherst, said she’s encouraging her district to adopt a therapy dog, based on her experience with Hadley, a golden retriever beginning her fourth year as a therapy dog at Baron Elementary School in Salem, where Parilla used to work. Hadley gives comfort to children in the nurse’s office, she said, and interaction with her is part of several youngsters’ independent education plans.

“She sits near kids who struggle in big assemblies, test situations, and transitioning to new situations,” Parilla said. A “Hadley Club” trained fourth- and fifth-graders to take kindergarteners and first-graders to play games and take Hadley for walks during school. “It was a 100 percent game-changer. She lowered the anxiety level, and changed the culture of the whole building.”

Like many elementary schools in New Hampshire, Pleasant Street is a “trauma-informed” school, where staff and educators are trained to support children who have experienced dangerous or upsetting events, some as early as birth. Many have been emotionally scarred from life or family experiences, such homelessness and drug abuse or domestic violence, or persistent bullying online or at school. Remi is one tool in a war chest of efforts to encourage self-advocacy in children, to increase their social skills and sense of belonging, and teach them healthy ways to cope.

In the school’s preschool class, the curriculum focuses on kindness, behavior that builds friendships, and ways to identify emotions and vanquish stress — including breathing mindfully, touching your tummy to feel your chest expand and contract, which reduces anxiety, said teacher Alexandra Kent.

“Half of our curriculum is emotional needs, and learning through play,” said Kent. Recently, the 11 children in the three-hour morning session learned to sing the song, “Five Little Pumpkins.” Next they’ll paint faces on a paper with five blank pumpkins, creating expressions that mimic cartoon examples of human emotions, with mouths and eyes that signal worry, fear, anger, happiness, and silliness. It’s a tool for learning how to recognize what others are feeling. “We do that through books, too,” Kent said.

“It’s hard when they’re four. They don’t know how to express what they need, want, and how they feel. A lot is coaching. Instead of yelling, say, ‘How can you ask for that?’ They have to learn how to interact with other kids before they learn their ABCs,” Kent said.

Shortly after the start of a recent school day, Levesque introduced Remi to the preschoolers.

“How many of you have ever seen a dog in school before?” he said. Nine children knelt or sat sit cross-legged in a circle on the carpet, transfixed by the dog laying stoically at one end.

“Can you guess how old she is? She’s older than you. She’s ready for kindergarten. If she comes up to you, it must mean you smell delicious."

The children took turns commenting about dogs: “I have three cats.” “I have a dog.” “I think Remi feels silly today.”

Levesque said, “If you’re having a tough day, you can come talk to Remi. I tell her my secrets, and she hasn’t told anyone yet. Remi is like a teacher, we want to be kind to her. Just like when we see friends in the halls, we don’t shout her name. We give her a silent wave.”

Remi stayed still while a child placed a treat on the floor.

“OK, thank you,” said Levesque — signaling Remi to take it, and thanking the four-year-old.

The children took turns patting Remi. Some scooted back just before touching her.

“What did you notice?“ asked Kent.

“She got back into her spot,” said Arthur DeLisle.

“How did she make you feel?” asked Kent.

Back in his office, Levesque produced a stack of 20 cards from students he had received since Remi’s first visit last week, including one from second grader Audrey Rushton: “Dear Remi, You are a great dog and lovely, too." Another student drew a picture of the boxer, with the message, “I love you so much.”

Remi reclined on her gray plush bed near the principal’s desk, and closed her eyes to nap — a quick break being on call. Levesque looked at the dog he trained with admiration and amazement. “I want her to be part of the school community. Not just a gimmick,” he said.

Research on youth suicide prevention efforts in schools and communities shows that such programs reduce self-harm, suicide and suicide attempt…

Outside all winter: In NH and in the Lakes Region, unsheltered homelessness rises