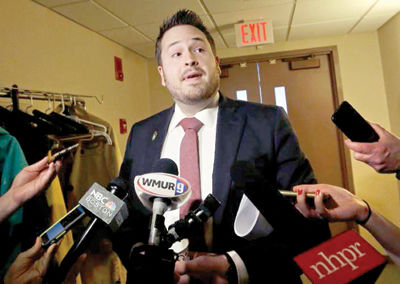 Emily Weber speaks at the State House while members of UltraViolet, Action Together New Hampshire, Granite State Progress, and Rep. Debra Altschiller held a small rally where participants dressed in costumes from the popular book and TV show "A Handmaid's Tale" urged the Legislative Administration Committee to recommend the expulsion of Rep. Fisher. (Courtesy UltraViolet)

LACONIA — Embattled state Rep. Robert Fisher resigned from the N.H. House, effective at noon on Wednesday, after a House committee that could have expelled him voted instead to recommend no action relating to complaints about his role in a controversial online forum.

His resignation leaves the city with only three of its five allotted representatives in Concord. Representative-elect Frank Tilton’s health has prevented him from being sworn in for this session, and City Manager Scott Myers said he will discuss options regarding the vacancies during his manager’s report at the City Council meeting on Monday, May 22.

Fisher came under fire for his participation in an online website, The Red Pill, which opponents characterized as a misogynistic forum that promotes rape. Fisher was identified as the founder of the forum in an expose by The Daily Beast that went viral and prompted protests against him.

The State Legislative Administration Committee met May 9 to hear testimony on the complaints, and on Wednesday reconvened to decide what action to recommend to the House. Options ranged from doing nothing to issuing a reprimand, to expelling him from the House.

Prior to Wednesday’s meeting, members of UltraViolet, a national women’s advocacy organization, joined local opponents that included Action Together New Hampshire and Granite State Progress, along with Rep. Debra Altschiller, at the State House. Many participants appeared in costumes from the dystopian novel “A Handmaid’s Tale” to express their disgust at Fisher’s online comments and to urge the committee to make an official recommendation to expel Fisher.

More than 42,000 members of UltraViolet had signed a petition calling on the State Legislature to discipline Fisher and expel him from office.

Many state lawmakers, including prominent Republicans such as House Speaker Shawn Jasper and Gov. John Sununu, have called for Fisher to resign.

The Laconia representative took their advice on Wednesday. In his letter of resignation to Jasper, he wrote, “Unfortunately, the falsehoods, lies and comments of an overzealous blogger and some of my colleagues have created a situation where I must genuinely consider the safety and wellbeing of my girlfriend, my family, and myself. It has been a pleasure to serve in this house with those members who have integrity. I'm happy that the House committee stood firm for free speech today, it is with a heavy heart that I will be unable to complete my term.”

Contacted later in the afternoon at his Laconia workplace, Fisher commented, “Carrying on with this circus was not their best interest, or mine.”

In announcing Fisher’s resignation, Jasper said, “Rep. Robert Fisher has informed the House Clerk of his resignation from the NH House, effective at noon today. It is unfortunate that the debate surrounding his actions while serving in the House have detracted from the good things that we have accomplished this session. But I welcome his resignation for the good of the institution and I hope that we can now move forward with our important legislative agenda.”

The city manager said he was more familiar with the local election process than with state elections, and he would have to discuss it with City Clerk Mary Reynolds, who was attending a meeting Wednesday. He said that, once they are clear about the options, he would bring the matter to the City Council.

The Secretary of State’s Office confirmed that RSA 655:81 governs the process for filling a legislative seat. The two seats would remain vacant unless the city makes a formal request for a special election. The Governor and Council would take up the request within 21 days and either approve or disapprove it — although no request has ever been disapproved — and then the statute sets a timeline for filing and holding elections.

The filing period takes place the week following the Governor and Council’s decision, and the election must take place between 110 and 124 days after that. That means a new representative would not be in place until at least September. By that time, most of the work at this session would be over, and only committee work in preparation for the second session in January would be occurring in Concord.

LACONIA — Immediately after receiving word of Rep. Robert Fisher's resignation from the state's House of Representatives, state and local politicians and advocacy groups were quick to react.

N.H. Democratic Party Chairman Ray Buckley issued a statement saying, "As the first to denounce Rep. Fisher's actions and call on his resignation after The Daily Beast unmasking, we are relieved to hear he is resigning effective immediately. His resignation is an admission of guilt that House Republicans unfortunately refused to acknowledge in today's Legislative Administration Committee decision to take 'no action.' Hopefully his resignation will make it clear to those defending his actions that misogyny and degradation of women is not acceptable in New Hampshire."

Emily Morgan, executive director of Action Together New Hampshire, said her organization "is pleased to learn Robert Fisher tendered his resignation following the executive session on his actions. While seeing Fisher out of a position of power was the outcome we were seeking, we are deeply disturbed by the extreme partisanship and blatant misogyny that this process exposed in the House. Action Together New Hampshire remains committed to holding elected officials accountable regardless of party affiliation, and we expect honorable public servants to also hold their colleagues to a higher standard of behavior than Mr. Fisher demonstrated."

Zandra Rice Hawkins, executive director of Granite State Progress, continued on that theme, saying, "We remain concerned that just minutes before his resignation, the NH GOP sent a loud message that it will work to provide political cover for individuals like Fisher who promote rape culture and misogyny. House Speaker Shawn Jasper, Republican Majority Leader Dick Hinch, and the entire Republican caucus of the Legislative Administration committee undermined the trust placed in them by constituents by putting party politics ahead of the women and children of our state and voting for no action to be taken on then-Rep. Fisher. There is absolutely no question this was about politics, since the Republicans required the motion on Fisher to be combined with a motion regarding actions of another elected official, leaving the committee with only the option to approve or condemn them both. It is hard to imagine a jury being ordered to issue a joint ruling on two different individuals charged with two very different offenses, but that is exactly the partisan game the NH House GOP played today. Furthermore, they refused to even allow a minority report."

Laconia Democratic Chairwoman Liz Merry said they are relieved that he resigned, "as his derogatory views on women are not representative of our community. The Laconia Democrats will work hard to elect someone who truly represents the people of Laconia. It is unfortunate that many House Republicans do not share those values ... and none of the Belknap County Delegation (made up of our State Representatives) asked for his resignation except Rep. Dave Huot (D-Laconia)."