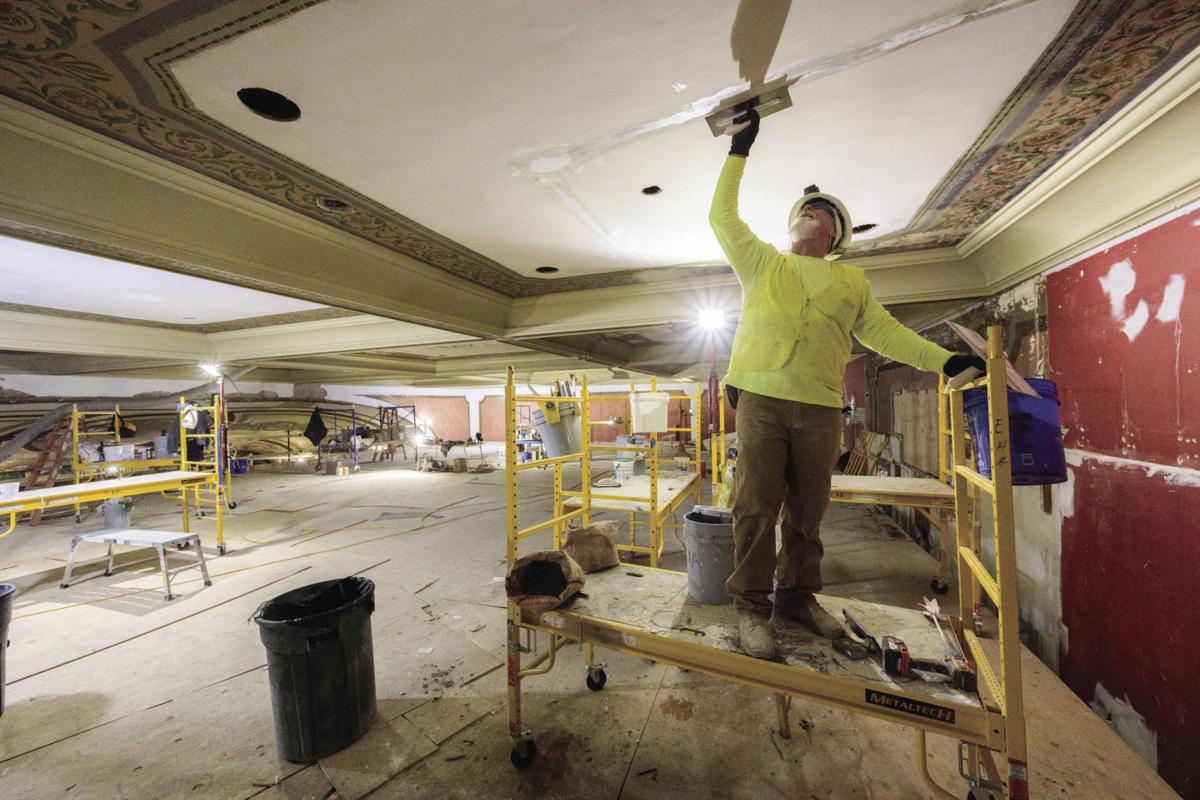 John Covey of Long Beach, California, a plaster restoration specialist with EverGreene Architectural Arts, repairs a section of the second-floor ceiling in the Colonial Theatre in Laconia. (Alan MacRae for The Laconia Daily Sun) 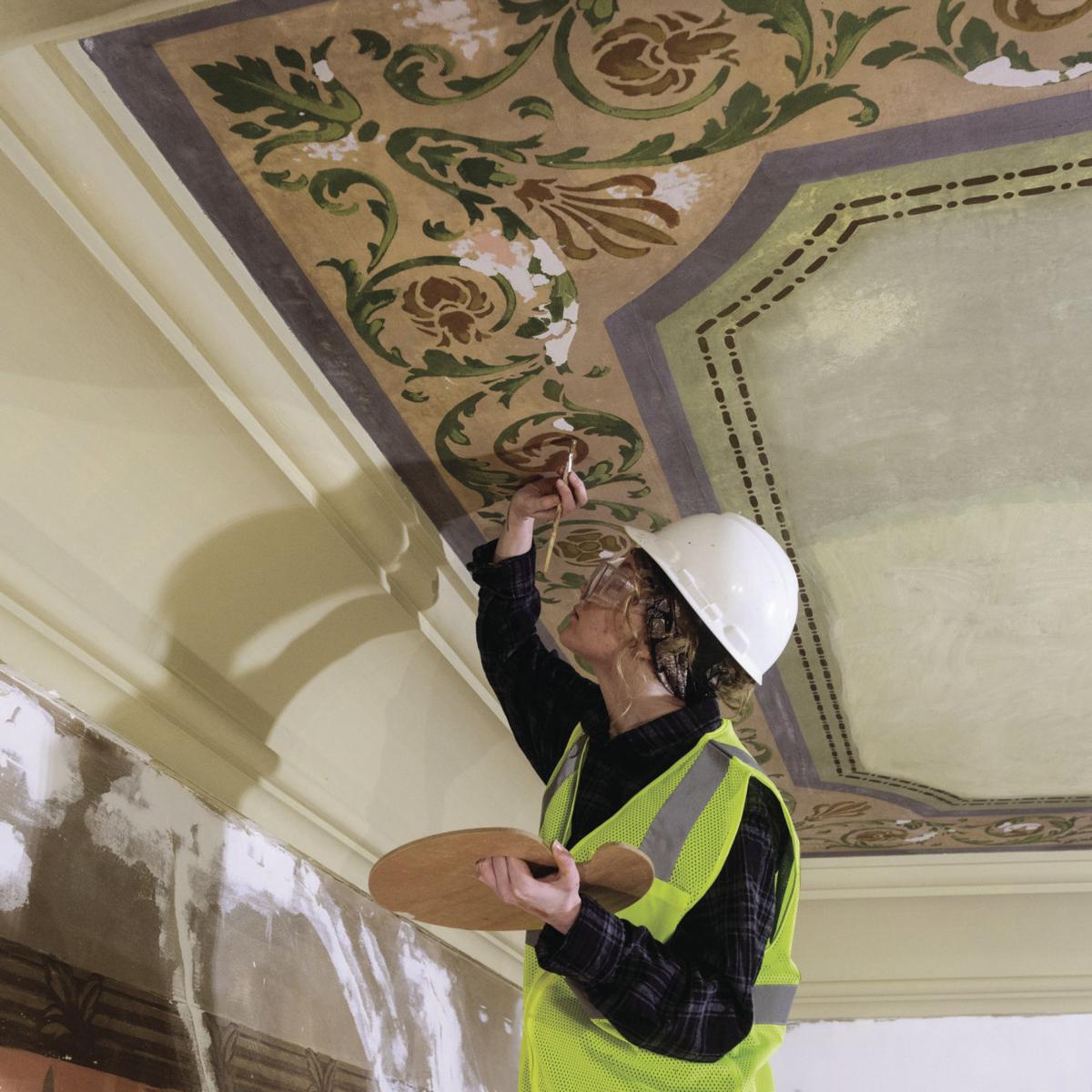 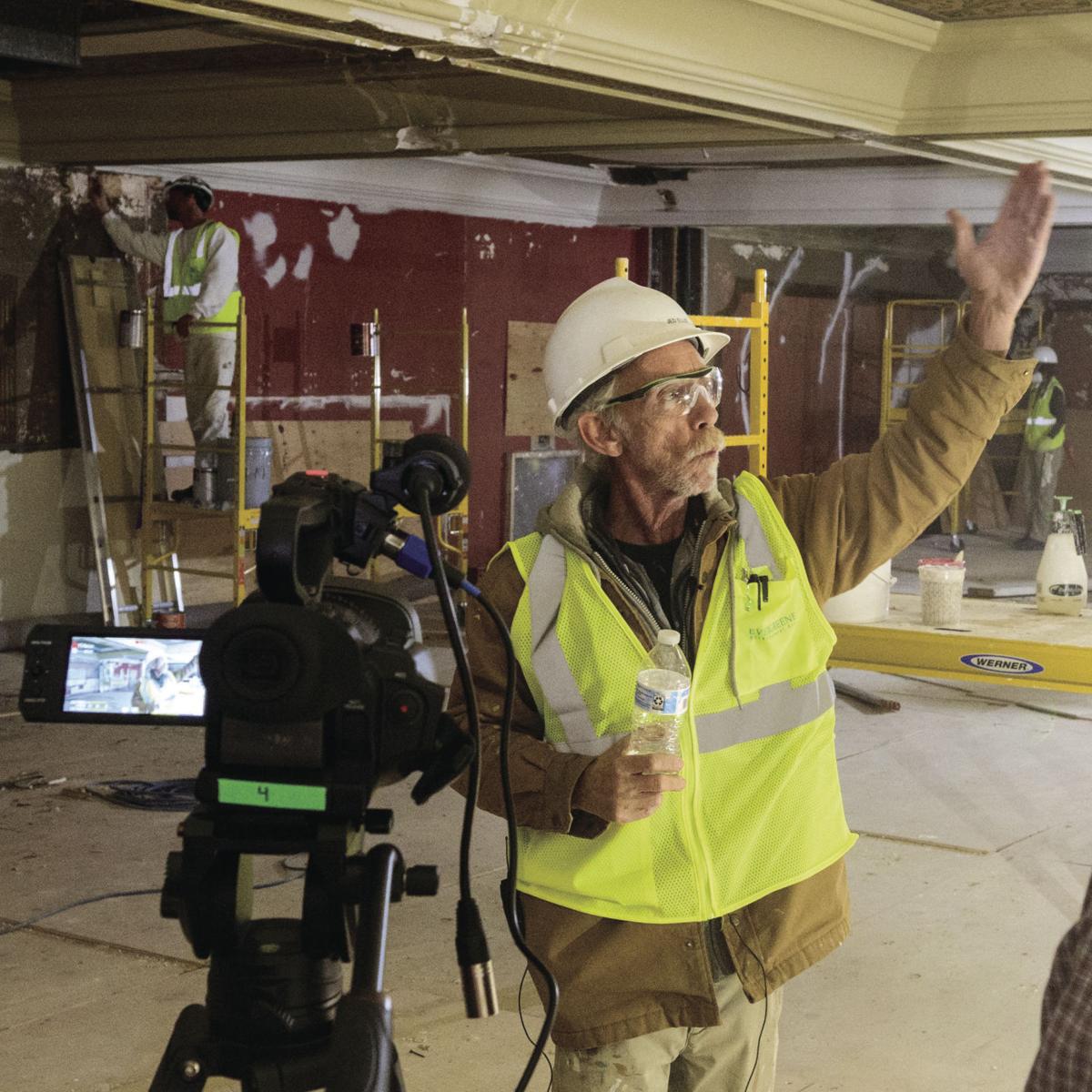 Jed Ellis, project manager for EverGreene Architectural Arts of Brooklyn, N.Y., describes the work underway to restore the many intricate details at the Colonial Theatre in Laconia. (Alan MacRae for The Laconia Daily Sun)

John Covey of Long Beach, California, a plaster restoration specialist with EverGreene Architectural Arts, repairs a section of the second-floor ceiling in the Colonial Theatre in Laconia. (Alan MacRae for The Laconia Daily Sun)

Jed Ellis, project manager for EverGreene Architectural Arts of Brooklyn, N.Y., describes the work underway to restore the many intricate details at the Colonial Theatre in Laconia. (Alan MacRae for The Laconia Daily Sun)

LACONIA — In the 1980s television action-adventure series “The A Team,” George Peppard’s character, “Hannibal” Smith, often said, “I love it when a plan comes together.”

The people behind the Colonial Theatre project might say the same as their own team brings the building back to life.

Since January, an army of construction workers, along with carpenters, electricians, plumbers, and artisans have been applying their respective skills into making the historic theater once again the city’s showplace and showpiece.

The Colonial was considered an outstanding venue when it opened in 1915. The Laconia Democrat, the city’s weekly newspaper at the time, raved that the Colonial was “One of the handsomest play-houses to be found in New England and far ahead of anything which the average city of Laconia can boast.”

In the ensuing years, it went from hosting vaudeville and other live performances to a movie theater. Over the years, the Colonial welcomed John Philip Sousa’s band, the premiere of “Return to Peyton Place,” and the piano duo of Ferrante and Teicher.

Now, 19 years after going dark, the lights are back on and the Colonial bustles with activity as workers push to get the theater open by the first of next year.

That prospect is exciting for Jeff Greene, chairman and founder of EverGreene Architectural Arts, which is restoring the elaborate decoration that covers the Colonial’s ceiling and walls.

Unlike most public spaces of the Colonial’s vintage, the theater’s interior decoration is almost all just as it was the day that it opened.

“The original decorative painting was never painted over” with different decoration, explained Jed Ellis, who is in charge of the EverGreene crew working at the Colonial.

“It was a blessing and a curse,” Ellis said.

As a result, workers had to encapsulate the original decoration with a solvent before they could begin the process of actually restoring the detailed stencil work.

“All the flat surfaces had some kind of decoration,” Ellis said, as he stood on scaffolding, high about the auditorium floor, just below the ceiling.

Greene and Ellis said it also was fortunate that most of the interior decoration was left intact when the Colonial was subdivided into a five-screen multiplex cinema in the mid-1980s. New plaster molding is being cast onsite to replace sections that were damaged or removed when the auditorium was split up.

Architect Robert Turpin said the Colonial underwent a renovation in the 1930s. The only other significant changes to the building were the installation of air-conditioning and a new marquee, he said.

With so much restoration going into the Colonial project, Ellis says it is absolutely critical that the makeover create the same “wow factor” that greeted the theater’s first patrons.

“We’re 10 percent of the contract,” Ellis said referring to the $800,000 that EverGreene is being paid for its work, “but we’re going to get 90 percent of the attention.”

The total cost of the Colonial restoration is expected to total $13.5 million.

Greene, whose company restored the Musical Hall theater in Portsmouth and regilded the Statehouse dome, said he first became aware of the Colonial about 10 years ago when he heard there was an effort underway to revive it. He started paying closer attention when the Belknap Economic Development Council, in collaboration with the city, purchased the 38,642-square-foot complex, of which the theater itself represents about 20,000 square feet.

Green visited the Colonial between six and eight times while the city and BEDC were working to put a financing package together.

Ed Engler, who was mayor when the project was announced in 2015 and when the financing was pulled together last year, and for whom the auditorium will be named, said the Colonial will give the city a first-rate civic auditorium.

Many see the Colonial as being the catalyst for a long-hoped-for revitalization of downtown.

“This will anchor downtown and lead to a resurgence,” Gary Groleau, chairman of the Colonial Oversight Committee, said.

Greene believes the restoration of the Colonial has the ability to capture public interest and support in a way that other buildings could not.

“Historic theaters are a repository of people’s memories which you don’t have in the same way in a modern building,” he said. There is an almost-magical feeling about them. “Theaters imbue of quality that enhances the experience” for both performers and the audience, he remarked.

“When they are a success [historic theaters] are the largest secular gathering place and so they can have a big impact,” Greene said.

According to a study by the League of Historical American Theaters, a single historic theater in a small city has the potential to sustain 39 full-time-equivalent jobs, create $1.4 million in total expenditures, generate $125,000 in revenue for state and local governments, and add $775,000 to household incomes in the host community.

While the long-term success of a project such as the Colonial depends on the ability to put together a calendar of high-quality programs, Ken Stein, the league’s president and chief executive officer, said historic theaters can leverage financial support that would not occur with newer venues.

“Seeing a show in a historic venue is an unusual experience,” Stein said. “It’s going to get a better response. And,” he emphasized, patrons ”not only buy tickets, but they also make donations.”

They are where an audience sees a play or concert in a place which, for decades, according to Ellis, “everyone would meet and everyone was one.”