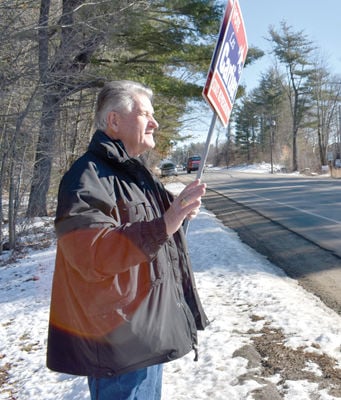 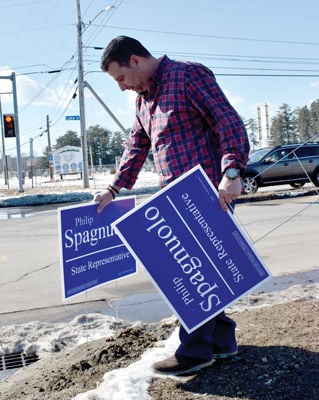 Les Cartier, the Republican candidate in today’s special election to fill a seat representing Laconia in the state House of Representatives, said he thought the race was “too close to call” on Monday afternoon, as he waved to workers leaving their shift at the O’Shea Industrial Park. (Adam Drapcho/Laconia Daily Sun)

Philip Spagnuolo, the Democratic candidate in the special election for a seat to represent Laconia in the state House of Representatives, said he has heard from voters that they are concerned about the local economy and the opioid crisis. (Adam Drapcho/Laconia Daily Sun)

Gun regulations pushed following the Feb. 14 shooting in Parkland, Florida, which killed 17 students, include raising the age for buying rifles from 18 to 21, banning “bump stocks,” which allow semi-automatic rifles to operate like an automatic, prohibiting sales of AR-15 assault-style rifles, and the arming of certain school employees.

Cartier, a Republican, said he would support the age increase.

It would be helpful if some school teachers were armed, said Cartier, a retired hazardous materials expert who worked for the state Fire Marshal's office.

“You have to have a deterrent somewhere in the soft target, so it doesn't become a soft target,” Cartier said. “You could suggest some of the veterans that work in there, or somebody in the school capable of using the weapon, and has the training, and experience, could carry. I don't see someone with a sidearm hanging off their waist, and you don't announce to children in the school who does and who doesn't have a gun.”

Many school teachers want no part of such a proposal and the NEA-New Hampshire, the state's largest teachers' union, called arming educators “an abominable idea.” Opponents of the idea say even trained law enforcement officers have difficulty quickly engaging and eliminating active shooters in crowded areas.

Cartier said he has “no problem” with eliminating bump stocks, but is “neutral” on the question on whether AR-15 rifles, which have been used in many school shootings, should no longer be sold.

State Rep. David Huot, D-Laconia, a former judge, has said that, if re-elected, he would introduce a bill that would ban the sale or transfer of AR-15s.

Spagnuolo, a founding member of Navigating Recovery in Laconia, favors such a prohibition and also supports a ban on bump stocks. He questions the idea of arming teachers.

“I don't know if that is the answer; it seems extreme,” he said. “As far as the age for buying rifles and the arming of teachers, at this point I don't have an opinion. We need to have more discussion.”

Cartier and Spagnuolo agree on a couple of legislative issues that have been in the news.

On Feb. 8, the House failed to support an effort to reconsider a bill calling for the state to pick up 15 percent of local government costs for employee retirement.

The effort failed on a 170-171 vote, which was largely on party lines, with Republicans opposing reconsideration, and Democrats favoring it.

These retirement costs have been growing rapidly and the state's contribution to covering these expenses has declined from 35 percent to zero.

City Manager Scott Myers sent a letter to the four Laconia representatives, asking them to support the bill, but when it came time to vote, Democratic Rep. Charlie St. Clair was out of town on previously scheduled business, Republican Rep. Peter Spanos did not vote, Republican Rep. Frank Tilton voted against and Democratic Rep. David Huot voted in favor.

Both Cartier and Spagnuolo said they would have voted to reconsider the bill.

“We started a long time ago on this, and the state made a lot of promises, and along the way cut it and cut it and I don't think it's fair,” Spagnuolo said. “I think that we need to bring the money back to the localities where it belongs and where it was promised.”

“You can't go from 35 percent all the way to zero,” he said. “The impact is substantial.”

Another issue that has rankled some municipal officials is the state's failure to live up to a statute calling for the hotel and restaurant tax to be divided with state getting 60 percent and localities receiving 40 percent. In recent years, lawmakers have given municipalities about 25 percent.

Both men said the state should live up to the original formula.

The two men differed in approach to the Northern Pass, the $1.6 billion project that would bring Canadian hydropower through New Hampshire to Massachusetts. Many communities that would be bisected by the power lines objected, saying it would be disruptive, damage views, hurt tourism and harm the environment.

Proponents said it was important to the state's economy, would bring jobs and had the potential for lowering energy costs. Some localities, such as Franklin, where a power converter station was to be built, were major supporters.

The state's Site Evaluation Committee voted against the project's application, 7-0, on Feb. 1, finding that the project failed a criteria that it would not “unduly interfere with the orderly development of the region.”

Republican Gov. Chris Sununu has been a big supporter of the project and objected to that decision, saying the committee did not give it proper consideration and short-circuited the process.

Cartier supports the committee's decision against the project, which featured large transmission towers in some areas where the line would not be buried.

“I would rather bury most of it, instead of having the high lines,” Cartier said. “This keeps the views and that's what most people come to New Hampshire for.

“It's a pass-through for Massachusetts, Connecticut and New York. We’re not getting the benefit of the electricity that will be passing through our yard.

“It's not really clear what benefits New Hampshire is getting, except some temporary jobs.”

Spagnuolo seems to concur with the governor.

“There is a process to be followed, and I agree it wasn't followed,” he said.

“Anything that brings jobs to the area, I think is great. My gut feeling is it's a good thing for New Hampshire, but I don't know all the details.”

Q and A on the issues

After the school shooting in Florida, suggestions have been made to raise to 21 the minimum age for purchasing rifles, banning sales of AR-15 rifles, prohibiting “bump stocks” that allow semi-automatic rifles to simulate an automatic weapon and the arming of certain school employees. What are your opinions of these proposals?

Supports increasing the age for rifle purchase to 21. “Neutral” on whether or not to ban sales of the AR-15. Supports banning bump stocks. Supports the idea of certain school employees being armed.

Supports banning bump stocks and prohibiting sales of the AR-15. Hasn't formed an opinion yet on increasing age for rifle purchase. Also, no opinion on arming of school teachers but says “it seems extreme.”

In the New Hampshire House of Representatives, a measure to have the state pick up 15 percent of local government costs for public employee retirement narrowly failed a reconsideration vote. The state once picked up 35 percent of these costs, but has reduced that commitment to zero. How would you have voted on that bill?

Would have supported bill.

Would have supported bill.

The formula for sharing restaurant and hotel taxes calls for a 60-40 split, with the state getting 60 percent, and municipalities getting 40 percent, but in recent years the state has provided about 25 percent to municipalities. Would you support efforts to have the state live up to the original formula?

Do you agree with the Site Evaluation Committee's denial of the application for the Northern Pass project?

“I support the SEC's decision. It's not really clear what benefits New Hampshire would be getting, except some temporary jobs.”

“There is a process to be followed, and I agree it wasn't followed. My gut feeling is it's a good thing for New Hampshire, but I don't know all the details.”