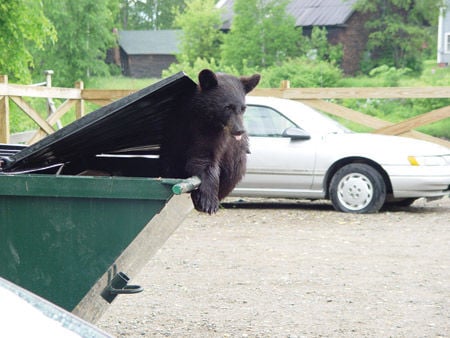 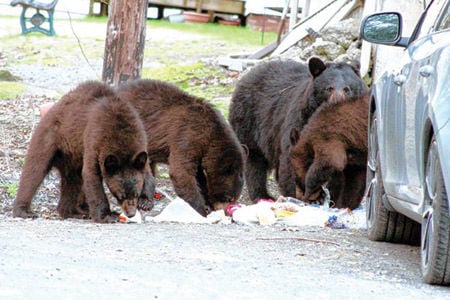 BRISTOL — A police officer shot and killed a bear with his sidearm in an incident that is prompting authorities to urge people not to leave food out or accidentally lure the animals to their property.

Police Chief Michael Lewis said Thursday that, on May 13 at 12:25 a.m., officer Thomas Seager responded to a 911 call from a resident on Riverdale Road about a bear breaking into a garage.

When the bear advanced toward Seager, he fired a “scare” shot, causing the bear to leave the area, Lewis said.

Seager reported the incident to the state’s Fish and Game Department but, nine minutes later, the property owner called to say the bear was back and up in a tree.

The second time the officer responded, the bear came down out of the tree and advanced on Seager again, according to Lewis.

“One round was fired, terminating the bear,” Lewis said.

The animal was killed with the officer’s .40-caliber Glock handgun.

Lewis said that, had the call arrived during business hours, the department would have called Fish and Game to handle it.

In some situations, Fish and Game would simply advise the police about best practices, and other incidents would require Fish and Game to respond to the scene, Lewis said.

“Where we live, we do have wildlife in the area,” he said. “Recently, there was a moose on the high school grounds for a couple of days.”

The shooting of the bear and this week’s relocation of problem bears in Hanover prompted Fish and Game bear biologist Andrew Timmins to ask people to take precautions.

He said bears and humans can easily co-exist as long as the bears do not become accustomed to finding meals at people’s homes.

Timmins said there has been bear activity around trash containers in Ashland, although the Lakes Region normally does not see problems with bears until the tourist season is in full swing.

“It starts to heat up when there are a lot of people recreating, the restaurants are doing a lot of business, and Fourth of July arrives,” he said.

The problem in Hanover has been ongoing, he said, due in part to the number of student residences where there are absentee landlords and the trash containers have plastic lids, rather than bear-safe closures. A number of local residents also leave their bird feeders up, believing the birds still need seeds.

The town of Hanover has worked with Fish and Game to inform the public about the dangers of leaving food where it is accessible to bears, but the effort has not been successful, Timmins said.

“A sow that has been living in Hanover for several years came front and center last year with three newborn cubs getting into food around houses. We tried to get people to understand those apartments needed to be cleaned up, and some residents followed the suggestions, and others didn’t,” Timmins said.

“This year she got involved again, and two yearlings got into some homes, so we were obligated to relocate them,” he said.

Three young bears were captured and relocated on Tuesday, and Fish and Game is urging homeowners and campers throughout the state to be vigilant if they do not want to experience similar problems.

“The third biggest attraction for bears is raising chickens without an electric fence around them,” Timmins said. “A lot of bears get shot at chicken pens because state law allows people to protect their property.”

Fish and Game offers to set up fences for those raising chickens, “but we can’t fence every chicken coop in the state; there are only so many hours and so many fences we can set up. We have to rely on people to be more proactive,” Timmins said.

According to Timmins, there are hundreds of bear complaints annually throughout the state, with 38 percent of them attributable to unsecured garbage. Bird feeders and the presence of unprotected poultry account for most of the rest of the bear-human conflicts.

In 2011, a bear injured a Center Harbor resident on her deck, resulting in Fish and Game having to shoot the aggressive animal.

While the loss of bear habitat to development was considered to be a contributing factor in the increase of conflicts with bears a couple of decades ago, Timmins said research has shown that the bruins are highly adaptable.

“Many years ago, we wouldn’t have expected that,” Timmins said. “They can adapt, even with development taking away good bear habitat. It puts them in closer proximity to humans, and many people have a low tolerance for them, but they’re easy to co-exist with. It just takes us to be more responsible.”

“I’d just make a plea for bears,” Timmins said. “They have a tough go of it.”

A young bear enjoyed a meal from a trash container. This is not the one shot in Bristol. (NH Fish & Game/Lynn Buth)

Bears share a meal after raiding some trash. A different bear was shot in Bristol. (Courtesy photo/NH Fish & Game)