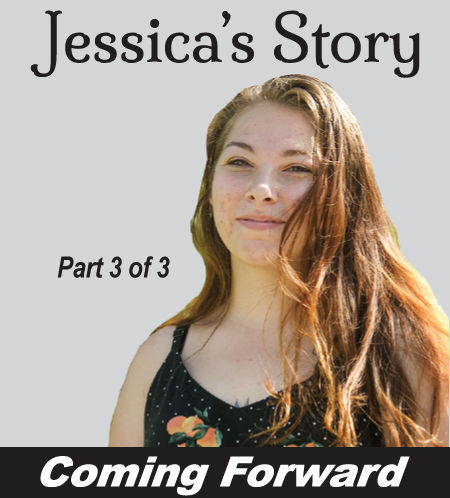 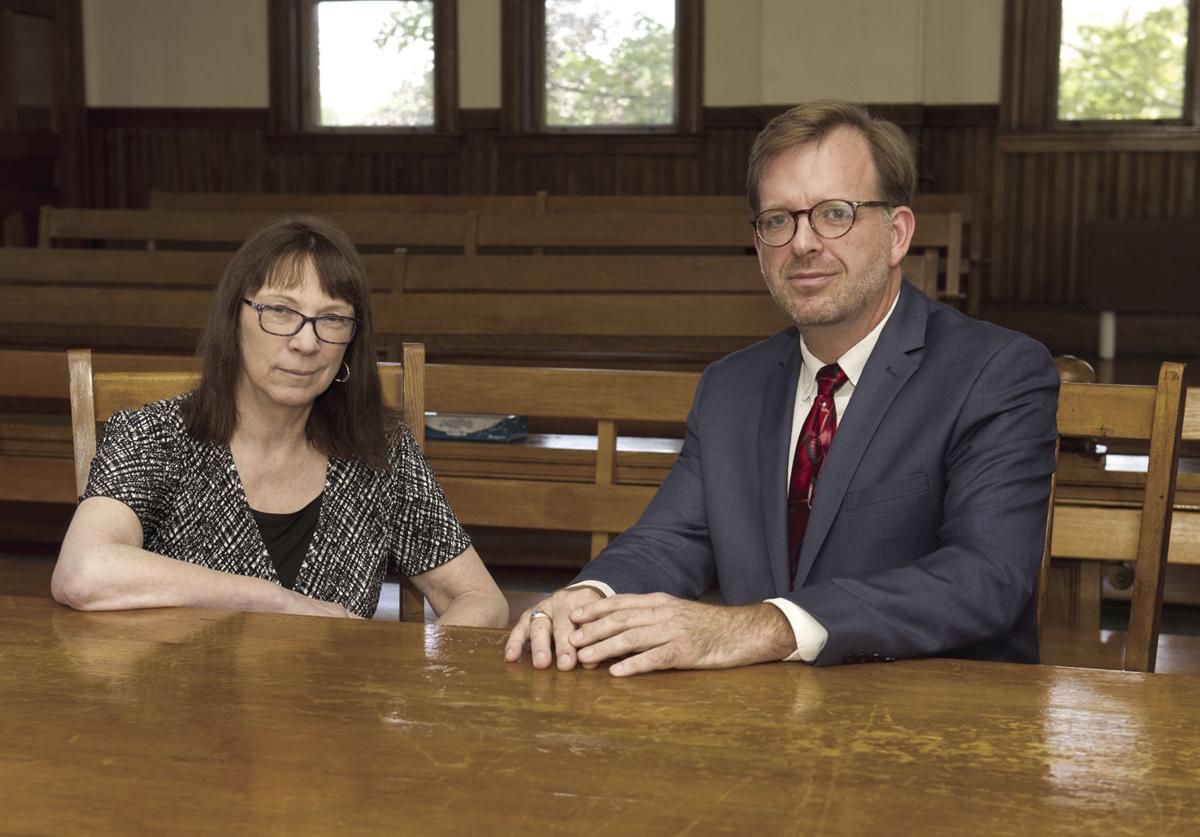 Barbara Belmont, Victim/Witness Coordinator, and Belknap County Attorney Andrew Livernois sit at a table in the Belknap County Superior Courtroom. They helped shepherd Jessica Washburn through the legal process that led to her stepfather being convicted on nine counts of sexually assaulting her. (Karen Bobotas photo/for The Laconia Daily Sun)

Barbara Belmont, Victim/Witness Coordinator, and Belknap County Attorney Andrew Livernois sit at a table in the Belknap County Superior Courtroom. They helped shepherd Jessica Washburn through the legal process that led to her stepfather being convicted on nine counts of sexually assaulting her. (Karen Bobotas photo/for The Laconia Daily Sun)

LACONIA — Jessica Washburn sat in gallery of the imposing 19th century courtroom in Belknap Superior Court as jurors filed in from the jury deliberation room.

When the clerk asked for the jury’s verdict, the foreman answered, “Guilty.” That verdict would be repeated eight more times — once for each charge Chandler was facing. (Chandler is appealing the conviction.)

“I like, started crying,” Washburn said as she recalled that afternoon back in April. “It was so relieving.”

She said that even if the jury had found Chandler guilty on just one of the nine charges, she would have felt the same emotion.

At that moment Washburn felt vindicated. The jury had believed her testimony about being sexually assaulted for years by Chandler. “They took a chance on me — someone they could have thought was lying — and convicted someone who had been hurting me for so long,” she said.

Earlier in the week Washburn spent 10 hours on the witness stand, answering questions from Belknap County Attorney Andrew Livernois and then Nicholas Brodich, one of Chandler’s defense attorneys.

The ordeal of telling her story in extensive detail to an interviewer, of waiting for months for the case to come to trial, and then testifying for a day and a half finally seemed worthwhile.

The whole experience, she said, helped her to begin regaining her self-respect.

But the experience, coupled with the abuse, also has had its downside.

Washburn says that she is not as close to some family members as she once was. At Chandler’s sentencing hearing in June she told the court because of the trauma of the assaults and its after-effects, she has trouble at work and is unable to have normal relationships with other people, especially men.

“He took away my self-confidence, my trust, my happiness and my self-respect,” she said in court, before Superior Court Justice James D. O’Neill III sentenced Chandler to a minimum of 17½ years in state prison.

She said she has had trouble holding a job. After jobs in a factory and then at a child-care center did not work out, she is now working as a dietary aide in a Seacoast area nursing home, a job which she says seems like a good fit.

“I love helping people and making connections with the residents,” she said.

Washburn is able to draw strength from the fact that the jury believed her testimony. And she can draw strength, too, from O’Neill’s reproach before imposing sentence when he told Chandler sternly, “You essentially stole a young woman’s childhood ... You violated a trust that is essential to the preservation of our society.”

But the jury could have acquitted Chandler. The chances of a not-guilty verdict in sex assault cases are almost 50-50. Five of every nine cases that are referred to prosecution result in a felony conviction, according to the Rape, Abuse & Incest National Network.

Barbara Belmont, the victim-witness advocate in the Belknap County Attorney’s Office, said she impresses on victims that their assailant may be found not guilty.

“Our focus has always been we don’t know what’s going to happen here,” she said. ”Even if the jury finds the abuser not guilty, I tell the victim, ‘We believe you. You spoke your truth and that’s important.’”

It was a gamble Washburn was not willing to take for the longest time.

She told of how, at age 16, she started seeing a therapist at Genesis (now Lakes Region Mental Health Center). In explaining the ground rules for her therapy sessions, the therapist told her that whatever she said in therapy was confidential — with one exception. If Washburn told the therapist that she had been sexually or otherwise physically abused then the therapist would have to report that to authorities.

The thought of police getting involved was more than Washburn was willing to bear, and she never told the therapist about the abuse until after authorities had been notified after Washburn’s former boyfriend, Andrew Laramie, in whom she had confided, shared the secret with someone who then was legally obligated to report that information.

Washburn believes that New Hampshire’s mandatory reporting law made it harder for her to begin the journey on the path toward recovery from the trauma from those years of abuse. If she could have unburdened herself to her therapist earlier on — in total confidence — she believes she would be coping better today.

She recalled that when she finally told the therapist about what Chandler had done to her, the therapist said that disclosure helped to make sense of what Washburn had told her in their earlier sessions.

“She never gave up on me,” Washburn said.

While Livernois acknowledged it was unfortunate that Washburn felt constrained from telling her whole story to the therapist, he nevertheless believes the mandatory reporting law is essential.

“There’s an important reason we have this law,” he said, explaining: “There had been a persistent problem — a culture — of child sex abuse being swept under the rug.”

“I saw when there wasn’t any mandated reporting,” she said. “When we learned about cases of abuse, we would say to ourselves, ‘If (only) we could have found out about it sooner.’”

While victims may look at the trial as a form of closure, the wounds left by sex abuse don’t disappear when a defendant is convicted. That process may take weeks, or months, or years, depending on the person. There’s no timetable for healing.

Crisis centers like New Beginnings in Laconia offer not only support and assistance to those who have just left an abusive situation, but also for those who are trying to start their lives over but who need help in doing so.

“Crisis centers are available throughout a victim’s lifespan and you don’t need to be in crisis to reach out to one,” said Amanda Grady Sexton, director of public affairs for the New Hampshire Coalition Against Domestic and Sexual Violence.

All told, there are 13 crisis centers across the state, she said.

Each center has people available 24/7 to help answer questions such as what happens when you report a crime, what happens when you go to trial, what are the risks that can come with reporting, as well as what steps to take to stay safe, and referrals for long-term support, Grady Sexton said.

While there have been significant improvements in how law enforcement and the criminal justice systems deal with sex assault cases, and the way victims are treated, more needs to be done, Grady Sexton said.

“We need to have ongoing training for professionals in the criminal justice system — judges, advocates, law enforcement,” she said. “They need to treat victims holistically; and all groups to be integrated and talking to each other.”

Grady Sexton also believes strongly that victims rights need to be strengthened further by making them part of the state Constitution.

She noted, by way of example, that victims are not guaranteed the right of a speedy trial. She maintained that too often defendants use various legal maneuvers for their cases to be continued until the victim is older in the belief that a jury will be less instinctively sympathetic to an older victim than a younger one, especially where the victim is an adolescent or pre-adolescent child.

“The current victims Bill of Rights works very well and does the job, and I don’t see the need at this time for a need to make a change in the legal structure,” Livernois said.

An effort to get victims’ rights guaranteed in the state Constitution failed last year, when a resolution passed in the state Senate, but was defeated in the House.

Washburn said that she has been working to the coalition on an effort that would extend the statute of limitations for sex assaults on minors.

Under the current law, a victim has 22 years from his or her 18th birthday to report an assault.

Grady Sexton pointed out that the average age for someone coming forward to report a child sexual assault is 52.

“Sexual abuse does not define a person in any way,” Grady Sexton said. “But abused children have much higher rates of suicide, substance abuse, mental health and physical health problems.”

Washburn says she chose to tell her story in order to empower other victims to come forward and tell their stories, because she believes it is only then that they can hope to restore some sense of normalcy to their lives.

“My main goal is to explain the process that I have gone through,” she said. “It’s not my personal gain I care about. I just want to help other people.”

Jessica's Story: She endured years of sexual abuse in silence

LACONIA — Jessica Washburn has a message for anyone who has been sexually abused as a child: “Telling the story about your abuse is not easy, …