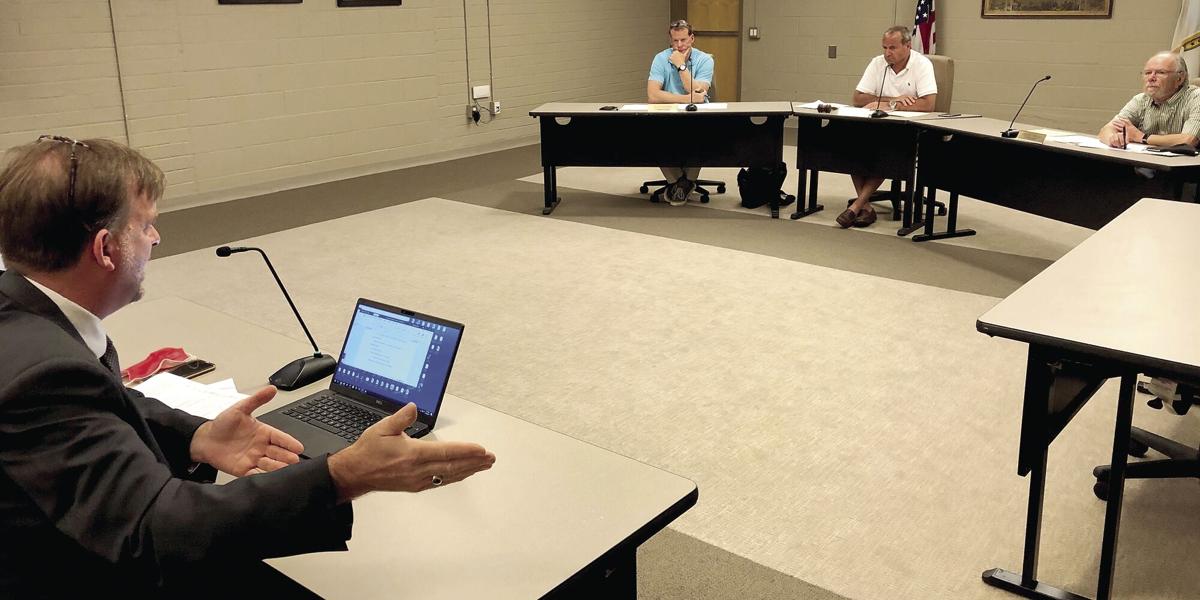 Belknap County Attorney Andrew Livernois, left, explains to county commissioners Thursday why a man judged mentally incompetent and dangerous was released after his office could not secure the services of a psychiatrist to evaluate him in order to have the man involuntarily committed. Listening, from left, are Commissioner Glen Waring, Commission Chairman Peter Spanos, and Commissioner Hunter Taylor. (Michael Mortensen/Laconia Daily Sun) 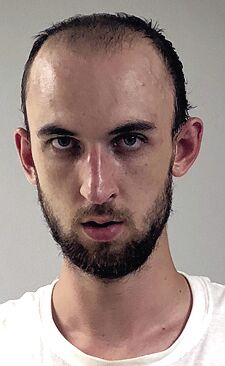 Belknap County Attorney Andrew Livernois, left, explains to county commissioners Thursday why a man judged mentally incompetent and dangerous was released after his office could not secure the services of a psychiatrist to evaluate him in order to have the man involuntarily committed. Listening, from left, are Commissioner Glen Waring, Commission Chairman Peter Spanos, and Commissioner Hunter Taylor. (Michael Mortensen/Laconia Daily Sun)

LACONIA — A local transient who has been found mentally unfit to stand trial and is considered to be dangerous is free after prosecutors were unable to find a psychiatrist to evaluate him within the time required by law.

Jason Rooks, 27, who has no known fixed address according to court records, was released from the Belknap County Corrections facility on Wednesday, 90 days after he had been ordered confined after a Superior Court judge found him to be a danger.

Under state law, a criminal court can order anyone found dangerous confined for up to 90 days while prosecutors pursue an involuntary commitment, which is a procedure that is handled in probate court.

In order for the probate court to hear the matter the person must be examined by a psychiatrist or specially-qualified health care professional.

Belknap County Attorney Andrew Livernois said each of the five therapists he contacted declined to do the evaluation.

“One said he was retiring. The others said they were either too busy or were not taking new cases,” Livernois told Belknap County commissioners Thursday.

Rooks was arrested on Aug. 4, 2018, in Belmont and charged with burglary after he allegedly broke into a residence and harassed the woman occupant by making “inappropriate comments” to her, Livernois said Friday. Four days later Rooks’ attorney raised the issue of his client’s mental fitness.

Rooks was examined by a psychiatrist in September 2018, and the doctor concluded Rooks was mentally incompetent to stand trial, but there was the potential that – with treatment and therapy – his mental health could be restored to the level where he could be mentally competent, according to an agreement signed by Superior Court Judge James D. O’Neill III.

Rooks was evaluated again in June 2019 and September 2019. In a court document dated Jan. 27, 2020, Livernois, and Rooks’ attorney agreed that “the defendant has not been restored to competency” and asked the court that Rooks undergo another psychiatric evaluation to determine his “dangerousness.”

The criminal charges against Rooks were dismissed by the court.

In an order dated this past Feb. 17, O’Neill noted that in a hearing on Feb. 12, the psychiatrist testified that Rooks suffers from multiple psychiatric disorders, including mood swings, hallucinations, aggressive behavior, and has a history of using multiple substances simultaneously. The therapist concluded that Rooks “presents a danger to himself or others” and that the only safe place where he can be treated is a secure psychiatric facility.

O’Neill concluded that, given Rooks’ condition, he was a danger and ordered him confined while the County Attorney’s Office began the civil process of having Rooks committed to the State Hospital.

Livernois said the process dealing with defendants with serious mental illness is challenging.

“The system we have in place is very cumbersome and complex,” he said, “and so it’s easy for it to break down.” He said the situation is aggravated even further these days when the mental health system in the state is already under considerable strain.

A psychiatrist who just recently agreed to accept referrals from the County Attorney’s Office is located in Portland, Maine.

“That shows you just how difficult things are,” Livernois said said.

Livernois said he is hopeful of finding a short-term solution to the problem. He said once inmate health-care services are shifted to a new provider next month, the county Corrections Department will have the services of a psychiatrist one hour a week. Livernois said that professional could be assigned to examine an inmate who needs a mental health evaluation.

In addition, Livernois said that he and other county attorneys throughout the state have been working to find a more long-term solution. He said the state Attorney General’s Office is also getting involved in discussions on the matter.

The problem of finding psychiatrists to do the necessary evaluations within the legal time limits made headlines just last month when a man judged to be mentally incompetent who was being held in Hillsborough County was released after he, too, could not be evaluated within 90 days. A few days after his release he allegedly sexually assaulted a woman in a Manchester cemetery.

Livernois said the Rooks case is only the second one during his time as county attorney when the issue of the 90-day window has come up. In the other case about two years ago, Livernois was able to secure the services of a psychiatrist in time to satisfy the legal requirements.

This is a weird way to frame a story about a man being locked up for being sick for 90 days and those responsible for him only calling five psychiatrists. I was calling several days back and I found one, in network for my insurance, and taking patients within a 3-week window, in the span of three hours. That this poor man whose mental illness has made him a danger to himself and others were so neglected by the authorities is a stain on their reputation, and I hope that somehow he finds the help he so clearly requires.

But, of course, we live in America, and here, we take mentally ill people with no fixed address and instead of getting them housing, healthcare, and preparing them for work, we wait until they snap and then lock them up after they've done something to someone else that can't be undone. This society is sicker than he is.