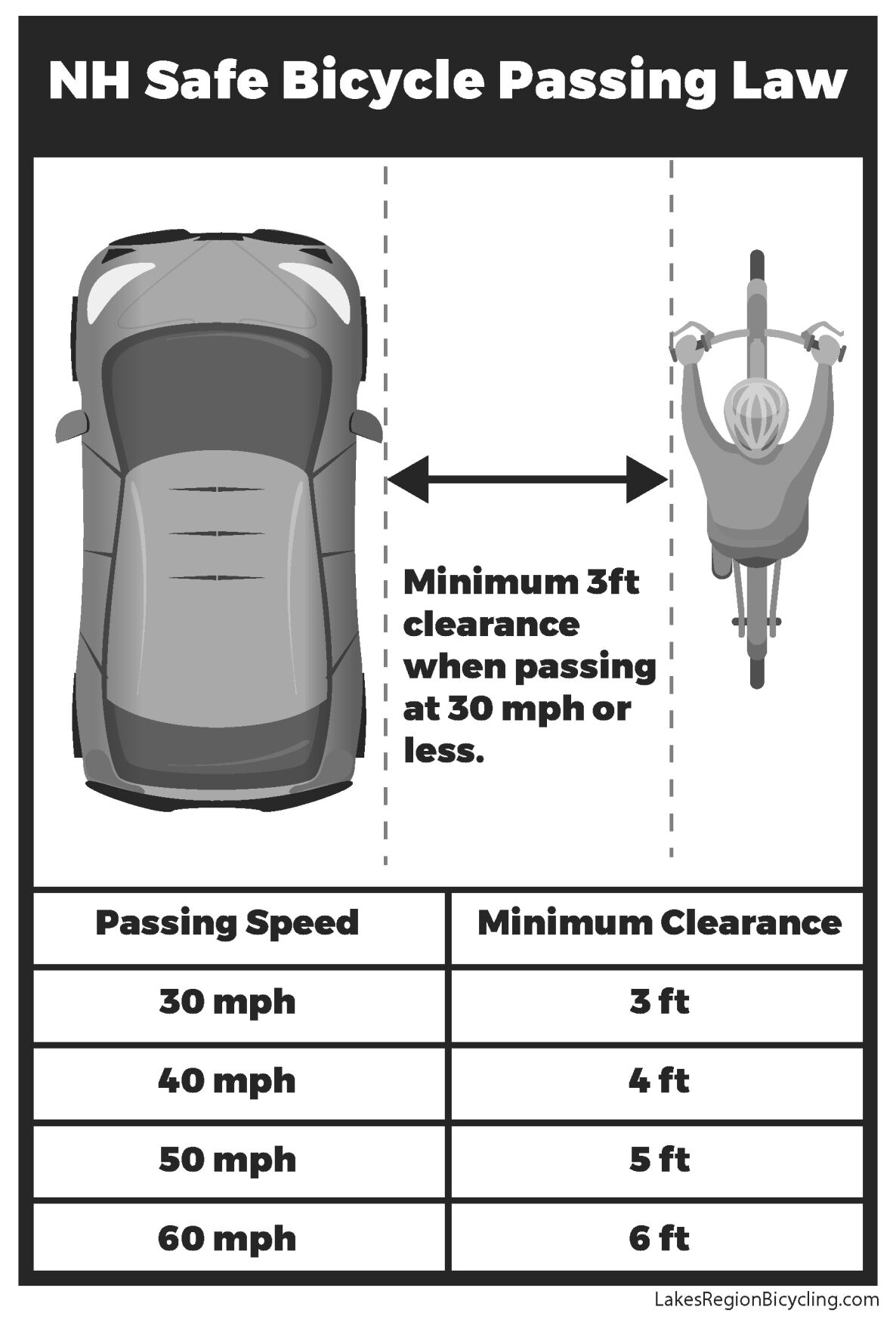 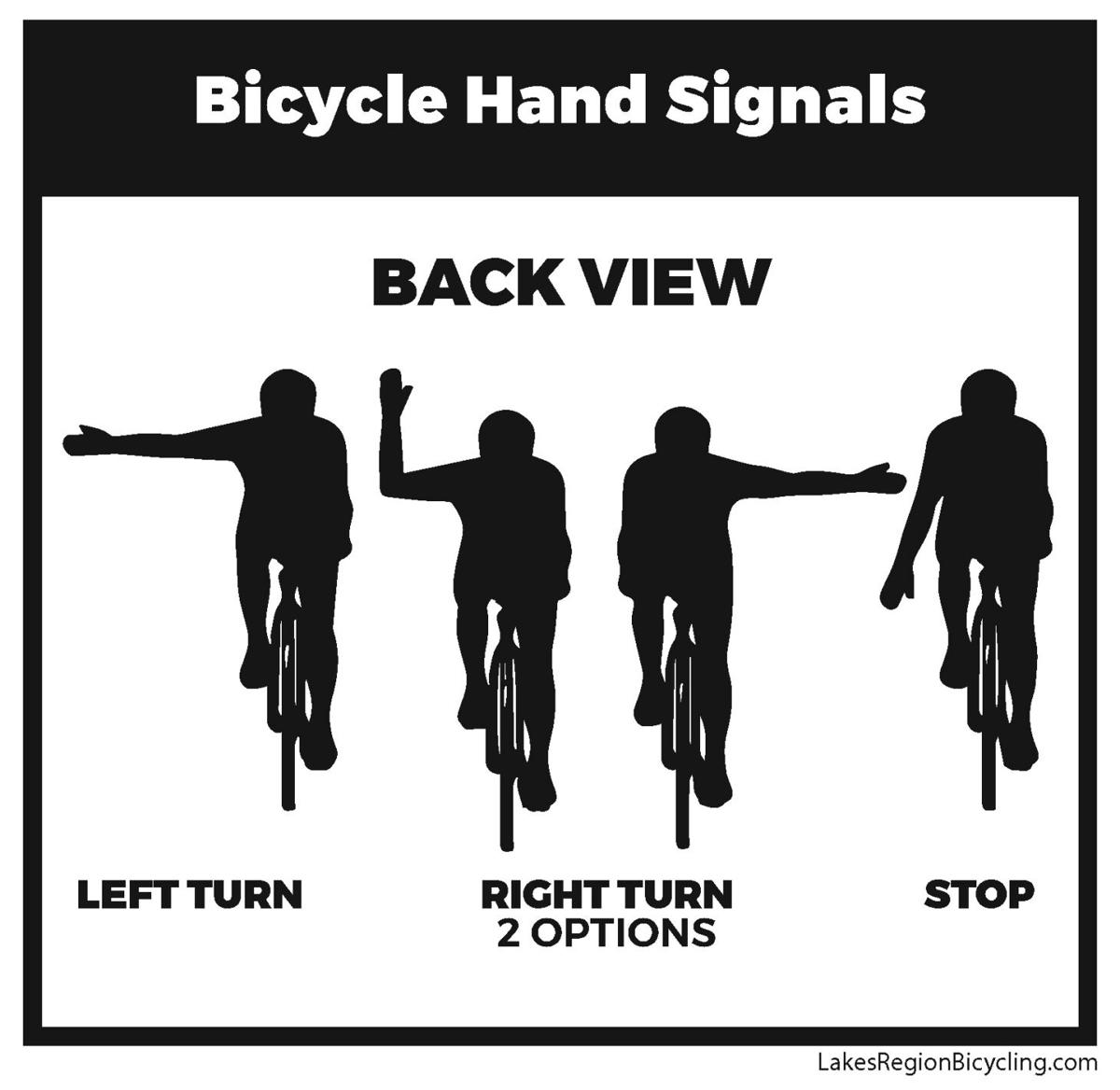 Spring is here in the Lakes Region and the flowers are coming out — and so are bicycle riders! It is important that bicycle riders and motor vehicle drivers know the state laws and rules of the road to make sure everyone stays safe this year. The NH DOT has a great brochure that provides detailed information, but here is a summary of what you need to know:

Do bicycle riders have to obey the same rules that cars do? — Yes! According to the NH DOT, “Bicyclists have the same rights and responsibilities as motorists. Bicycles are vehicles.” What does this mean in practice? This means riding your bicycle with the traffic as opposed to directly towards oncoming traffic (If you are riding a bicycle, cars should be coming up behind you on your left to pass you), giving pedestrians the right of way, signaling your intentions (using hand signals), stopping at stop signs and obeying traffic signals.

Do bicycle riders have as much right to the road as motor vehicles do? — Yes! Technically a bicycle rider could ride in the middle of the lane, but in practice bicycle riders should stay as far to the right as is safe. In some locations in the Lakes Region there aren’t safe shoulders, so bicycle riders may be partially or completely in the car lane. Bicycle riders, especially those riding road bikes, need to ride on sound pavement. If they are forced off onto a dirt or sandy shoulder, there is a good chance their thin tires will sink in causing a sudden stop that may throw and injure the rider. Car drivers should be patient and pass them only when its safe.

Bicycle riders always have to stay to the far right — correct? — Not necessarily. The general recommendation of the NH DOT to bicyclists is “Take the full lane when your safety depends on it.” According to the NH DOT there are four common situations when bicycle riders should move from the far right:

1. When overtaking and passing another bicycle or any other vehicle proceeding in the same direction.

2. When preparing for or making a left turn at an intersection or into a driveway.

3. When proceeding straight in a place where right turns are permitted.

Are all bicycle riders required to wear a helmet? — No. Only riders 16 years of age or younger are required to wear a helmet. However, although the law only mandates helmets for those under 16 years of age, a helmet at any age provides much needed protection in the event you lose control or are thrown from your bicycle. When you are riding a bicycle, you don’t have the protection of a car surrounding you. Even a light impact to your head can have serious short and long-term consequences!

Do motorized vehicles have to give bicycle riders at least 3 feet of clearance when passing? — Yes! According to NH State Law, three feet is the minimum clearance you must give a bicycle when passing them at 30 mph or less. If you are going over 30 mph when you pass, you must give one extra foot of clearance for each 10 mph over 30 mph you are going — four feet for 40 mph, five feet for 50 mph, 6 feet for 60 mph. Many bicycle accidents occur when drivers are impatient and try to pass too close to a bicycle rider. I have had several near misses with side mirrors on cars attempting to pass when they could have waiting a few extra seconds and pulled over and passed safely. And just to be clear, the clearance is between the widest part of the vehicle and the widest part of the bicycle. For most situations it is the distance between the outside edge of the vehicle mirror and the outside edge of the bicycle handlebars (some bicycles have mirrors on their handlebars so in those cases it is measured from the edge of the car mirror to the edge of the bicycle mirror). A mirror hitting a handlebar or bicycle rider will result in an accident with injuries!

Do pedestrians always have the right of way? — Yes! According to the NH DOT “Bicyclists and motorists must yield to pedestrians in a crosswalk, whether the crosswalk is marked or not.”

Is it okay if I blow my horn at a bicycle rider who is obeying the rules and trying to be safe? — No. You could startle the rider and cause an accident. Again, be patient and pass only when it is safe to do so!

Be aware and be courteous — Distracted driving and riding is unsafe. Be aware of your surroundings at all times. Bicycle riders should always be scanning the road ahead of them for hazards, safe places to move over to make it easier for motor vehicles to pass, etc. Motor vehicle drivers need to be on the lookout for bicycle riders and approach and pass with caution. A bump or hole in the road could cause a bicycle rider to swerve suddenly and you need to be ready to react safely. A good rule is to put yourself in the other person’s position and act courteously. For instance, if you are riding your bike on a section of road with no safe shoulders and you see a lineup of cars patiently waiting to pass you, pull into the next driveway you come too and let the vehicles pass. Likewise, if you are a driving a car and a bike rider is doing everything right and you can’t pass, don’t do anything that may endanger the bicycle rider.

When in doubt, be patient and play it safe — Many accidents involving a motorized vehicle and a bicycle could have been avoided if patience and safety were put first. Slowing down and waiting a few seconds for a safe opportunity to pass a bicycle rider is not going to affect your schedule that much, and it will be a lot worse if you rush and cause an accident with a bicycle!

Educate others — If you learned something new in this article, please share it with others. It is a great idea to share the rules and tips with your children and others you know – both motorists and bicyclists. Remember, if you cause an accident with a bicyclist through an error, in addition to the physical harm you may cause, you may also be liable to lawsuits and civil penalties. The more we all know, the safer we will all be!

Resources — There are several great resources that you can access and share with others. Here is a list of some of the best sites that cover safe motorist and bicycle interactions.

Jim Zimmermann is the founder and owner of LakesRegionBicycling.com and a lifetime bicycle rider. Jim is an advocate for safe bicycling in the Lakes Region. You will often see Jim riding around the Gilford area on his lunch breaks or on longer rides on the weekends.

This chart and image from CyclingSavvy.com shows the 5 most common motorized vehicle versus bicycle accidents:

These crashes are caused by motorist error, and would legally be the fault of the motorist regardless of where on the road the bicyclist was positioned.

Drivers of narrow vehicles, such as motorcycles, scooters and bicycles do not occupy the lane by default. Their vehicles only occupy a fraction of the lane width. Since bicyclists are both narrower and slower than most traffic, other drivers expect to be able to use that extra lane width when passing. The problem is, many drivers misjudge the amount of space needed to provide a safe (and legal) buffer. So, when a bicyclist knows there is not enough space for motorists to pass safely within the lane, she moves into a lane control position to indicate that faster traffic must change lanes to pass.

When a car door is opened into the path of a bicyclist, the results can be deadly. Motorists are required to look before opening a door into the street. But people get distracted and forget. Bicyclists have 100% control over preventing this type of crash by riding 5 feet or more from parked cars.

Motorists sometimes pass a cyclist just before making a right turn. They misjudge the speed and distance needed to pass, or they just don’t register the cyclist’s presence. By riding far enough left to require a lane change, the cyclist encourages drivers to wait and turn after the cyclist has cleared the intersection.

When cyclists ride on the edge, they are often screened by passing cars. This hides them from view of motorists waiting to turn left. By moving left and seeking vantage to see and be seen, cyclists can usually discourage the left turn violation, or at least have space to perform an avoidance maneuver. Motorcyclists do this, too.

The edge of the road is often invisible to motorists waiting at side streets. Buildings, shrubs, poles and other obstructions can hid a cyclist who is riding too far right. Just as motorcyclists are taught, we teach cyclists to ride where you can see the driver of a car waiting to pull out.