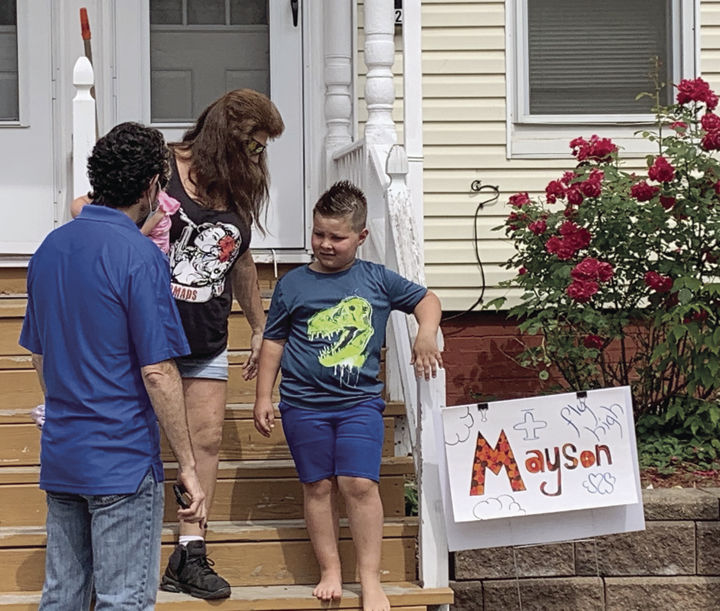 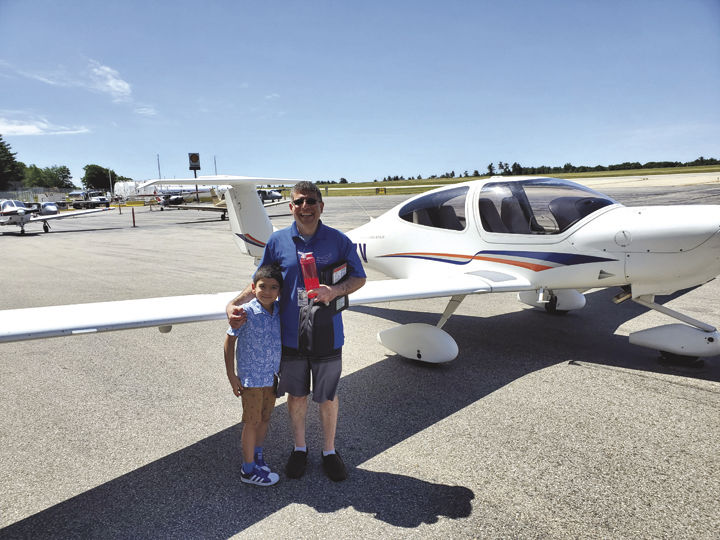 LACONIA — Martha Oberstein and a group of volunteers were quietly writing chalk messages on the driveway outside the Laconia home of 14-year-old Eric Sweeney on Saturday morning, while David Hampson, a pilot from Greenland, N.H., readied his Diamond DA40 airplane for takeoff from Portsmouth’s Pease Airport. A few miles away, Martha’s husband Gary was setting up signs and cameras near 6-year-old Mayson Stewart’s Willow Street home. Summer adventures and surprises in the Lakes Region are the stuff of childhood dreams. On Saturday, Martha, Gary, David, and several volunteers had fanned out across Laconia readying for a summer adventure.

When Mayson answered the knock on his door, it took him a few moments to process Gary’s invitation. Flyover? Parade? Seeing the wide smiles from his family, Mayson jumped up and down and ran outside to the cheers of several volunteers. Soon the Laconia Police and Fire Department led a drive-by parade past Mayson’s house as the surprise was captured in photos and video. Next, Gary turned up the volume on his speakerphone for Mayson’s special call from David Hampson, who was circling above and tipping his plane’s wings, all to Mayson’s delight. As David circled overhead several times, the parade continued onto Route 107 for the 15-minute drive toward Eric’s home. There, when Martha got the call that the parade was approaching, she invited Eric and his family outside to meet the Laconia Fire and Police Drive-By, followed by the Diamond DA40 Flyover. As Eric and his brother Sean watched the aircraft circle overhead, Eric told David on the phone, “That thing is awesome!” The Dream Flyover / Drive-By ground-to-sky friendship missions for both boys were organized by Above the Clouds, a charity based in Norwood, Massachusetts.

Gary Oberstein, a Sanbornton resident, founded Above the Clouds in 2013 as a way to pair his passion for flying with his desire to help kids. With a mission to bring joy and hope through the wonder of small aircraft flight to children facing adversity, ATC has flown more than 500 youth. Its free programs include a one day “Dream Flight,” an aviation-focused mentor program (Discovery Flyers), a full mentorship program with free certified flight instruction (Cadet Flyers), and the recently added Dream Flyovers, started when the COVID-19 pandemic forced the charity to postpone its Dream Flights for kids. Saturday was ATC’s second Flyover event in Laconia. Since April, the Dream Flyovers have also benefited more than 30 children in Massachusetts.

“Kids need our support right now more than ever,” says Oberstein. “It is a privilege to be able to meet kids where they live. I hope that when they look back on these challenging times, they will remember joy. I hope they remember that a group of people came together to let them know they were SEEN, that they MATTER, and that together, they shared these unique moments of joy.”

When ATC resumes its Dream Flights, Eric and Mayson will each have a chance to fly in the co-pilot seat of a small aircraft and actually take the controls of the plane. It is there, Above the Clouds, where sparks of hope ignite as the kids realize, “If I can fly an airplane, I can do anything!”

GILFORD — It’s the little things that make the big differences.